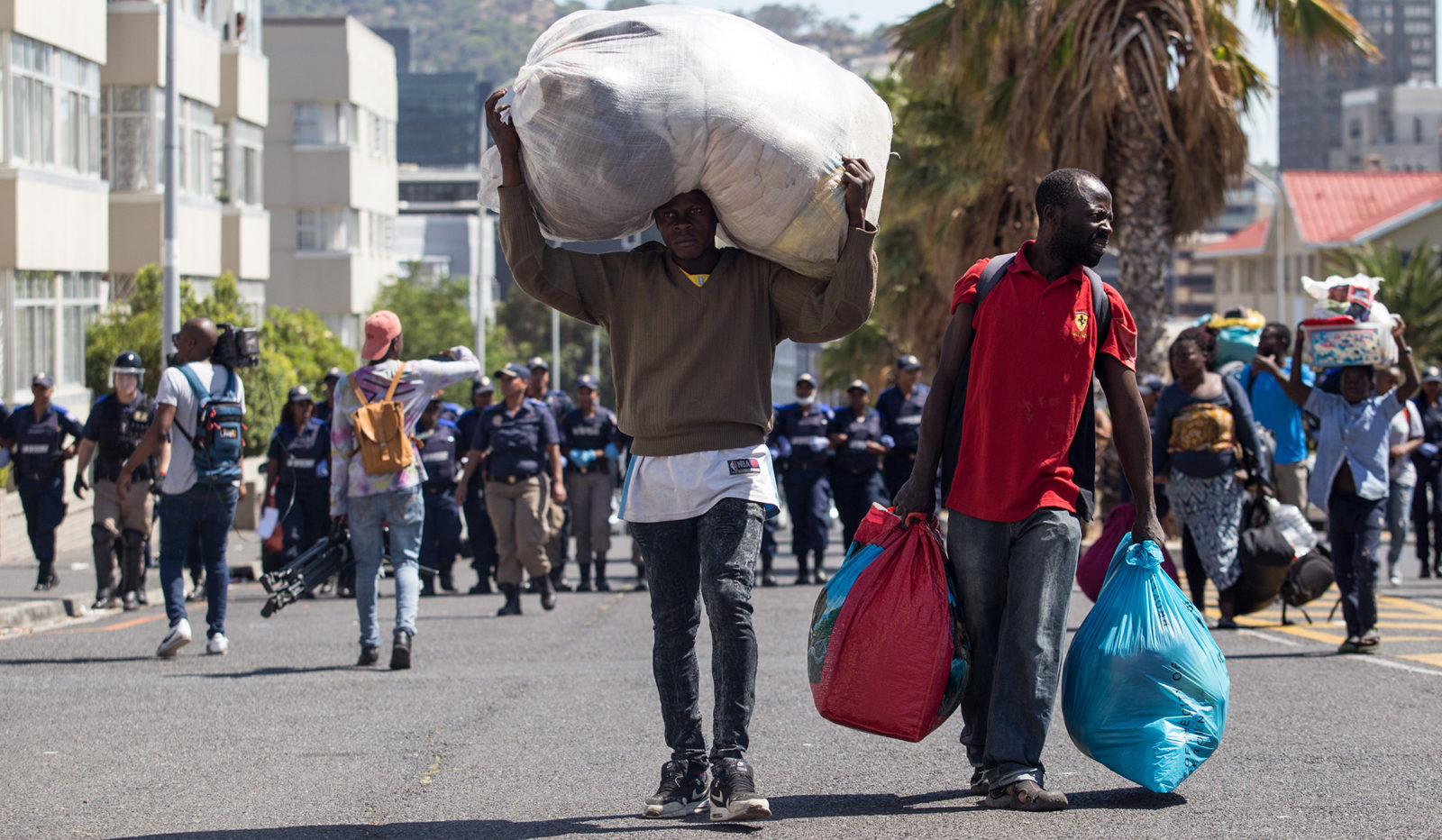 Hundreds of refugees and all of their belongings were sitting on vacant land near the Cape Peninsula University of Technology (CPUT) District Six campus on Monday afternoon. (Photo: Ashraf Hendricks)

'We are dying in this country,' says Somali man. By Ashraf Hendricks and James Stent

City of Cape Town Law Enforcement officers are keeping a close eye on a group of about 200 refugees who have moved away from Greenmarket Square on Sunday. Earlier today the group was sitting on vacant land near the Cape Peninsula University of Technology (CPUT) District 6 campus, but by late Monday afternoon they had gathered outside Caledon Square Police Station.

On Sunday law enforcement officers carried out an operation on Greenmarket Square to remove the belongings of the refugees who had been living outside the Central Methodist Mission for several weeks. The refugees were ushered from the area. Most of the families sought refuge at St Mary’s Cathedral on the corner of Hope and Roeland Street, opposite Parliament.

St Mary’s urgently obtained an order against the group for trespassing. The order was then enforced by law enforcement and the sheriff of the court. Police confirmed that eight protestors were arrested on Sunday.

On Monday, officers gave the protesting refugees 20 minutes to leave the District Six land. The group tried to walk to the police station but were blocked by Law Enforcement. They returned to vacant land next to CPUT, but by late Monday afternoon were reported to have moved back to the police station.

During ongoing scuffles with the authorities, police told GroundUp that one female aged 27 and seven males aged between 23 and 50 were arrested and charged for trespassing at St Mary’s Church. They were taken to Cape Town Magistrate’s Court on Monday morning for their first appearance.

“They took all my stuff yesterday,” said Ali Muso, a refugee from Somalia who spent Sunday night in a park on the corner of Tennant and Constitution streets. “I don’t have any clothes now.” Muso said that he wants to leave South Africa as soon as possible, “We are dying in this country”. He said that the refugees don’t have a plan and will stay in the city until they are moved.

As officers moved onto the park grounds earlier on Monday, scuffles broke out on the field. Children were seen crying and pulling on their parents. Some adults fell to the ground dropping their rolled up mattresses and bags trying to escape the chaos. One officer had a male refugee pinned down while another refugee was dragged towards a police vehicle.

“Where are we gonna [go]?” asked a mother while holding her daughter. Both of them were crying. “Where are the human rights … I’m a refugee. I have my papers. I’m not illegal in this country,” she said.

The refugees then made their way down Tennant Street, where they sat underneath shaded trees while law enforcement officers stood watch.

Richard Bosman, the City’s Executive Director for Safety and Security, said in a statement that three men were arrested during the ongoing operations for assault on a police officer, contravention of a court order and resisting arrest. “

“This is an extremely volatile situation, which the City is trying to manage as best as possible and we appeal to everyone concerned to please allow our staff to execute their duties, in line with the court order,” he said.

The City has previously stated that it would not be providing emergency housing for the displaced refugees and hoped to move them outside the city, as stipulated by the order of court.

In October 2019, hundreds of refugees began a sleep-in protest outside the United Nations High Commissioner for Refugees (UNHCR) offices in St George’s Mall. After police action against the group in late October, the protesters fled to the Central Methodist Mission on Greenmarket Square, where they remained until Sunday. The protesters have been demanding that they be resettled to a third country, despite repeated insistence by the UNHCR and other organisations that such a demand is impossible.

The Central Methodist Mission remains occupied by a faction of the protesting group. In December, the refugees engaged in the protest in and around the Central Methodist Mission split into two groups. The group inside the church are followers of JP Balous (or Balus) and his wife Aline Bukuru, and are predominantly of Burundian and Eastern DRC extraction. The group that had settled outside the church, and who have now been moved on, are the followers of Papy Sukami, and are predominantly from Kinshasa in the DRC.

Following reports of sexual violence in the church also in December 2019, JP Balous gave assurances that no men would be allowed to sleep inside the church, and instead would sleep outside. It is unclear whether this promise still holds after Sunday’s removal of the protestors’ sleeping structures, and there have been reports of groups of men within the church.

This is an ongoing story and information will be updated as it proceeds. DM