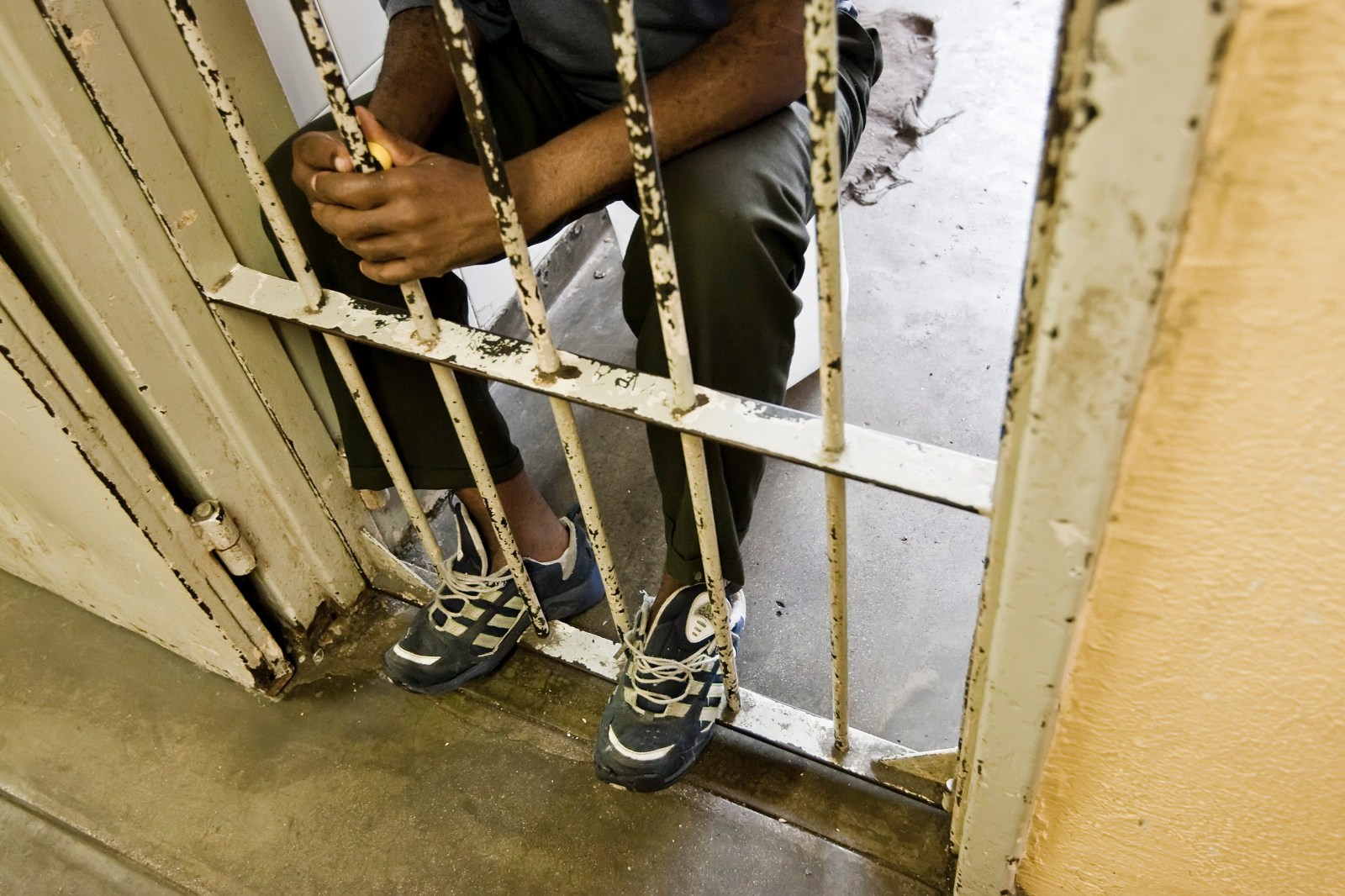 An awaiting trial inmate at Pretoria's C-Max prison. Pictured is an inmate in his cell. (Photo: Theana Calitz/Gallo Images/Foto24/)

A prisoner at the Ebongweni super-maximum prison in Kokstad has won the first round in his battle to be transferred from that facility in a case that might well force the Department of Correctional Services to provide information on the admissions criteria for South Africa's only supermax prison.

Mduduzi Selepe, 58, is serving a 15-year sentence, handed down in 2011 for an armed robbery. While he started his sentence off at the Westville Prison, he was soon transferred to a number of different correctional facilities in the province and has been held at Kokstad’s super maximum-security prison, Embongweni, since November 2017. A year before his admission, the head of the prison told the inspecting judge of prisons that every prisoner in his facility is on antidepressants.

Selepe claims in papers before court that he had qualified to be considered for parole in October 2018, but parole is not considered for prisoners at Embongweni and they will only be considered once they are moved to another prison. As the prison requires that prisoners complete a three-phase behaviour modification programme before being sent back to another facility, this can take a minimum of three years, but Selepe said he has remained at Phase 1 since his admission and has not been graduated to Phase 2 yet. According to a report by the Judicial Inspectorate of Prisons, at least one prisoner has been stuck in Phase 1 for a decade.

Thandeka Kati, Selepe’s attorney, at the Centre for Applied Legal Studies, said that they obtained an order during February 2020 from the Pietermaritzburg High Court for correctional services to provide them with the full record of the decision to transfer their client from the Qalakabusha Correctional Centre near Empangeni to the Embongweni Supermax prison. The court ordered the department to do so by 27 March 2020.

Kati added that their goal is to bring an application to review and set aside the decision to transfer Selepe to Embongweni prison.

According to the JICS report, they have received several complaints and concerns from inmates at the prison, as well as their families, academic institutions and human rights organisations.

Van der Westhuizen stated in his report that an overview of other supermax prisons in the world indicated that solitary confinement of between 22 and 24 hours a day, limited contact with other inmates and family, and severe restrictions on movement and privileges are common.

He explained that newly admitted inmates at the prison are placed in what is known as Phase 1, a very strict programme, and they are then supposed to progress through Phases 2 and 3 which are not so restrictive until they can be transferred to other programmes.

He said he visited the prison in July 2016, March 2017 and April 2018 while other staff members, and inspectors visited regularly. “Well-known inmates like Ananias Mathe (who unsuccessfully attempted to escape from there), and Western Cape gang leader George “Geweld” Thomas, who is serving several life sentences, have been and are being incarcerated there. No escape has taken place in the history of the centre,” Van der Westhuizen added.

He explained that in Phase 1, inmates are housed in single cells with a bed, washbasin and toilet, behind steel doors with a small dark window and a shoe-box size opening below it. “Food is placed through this opening. They are supposed to be taken out of the cell for one hour of exercise per day, alone, in a very small courtyard.

“Reportedly, this often does not take place. The same applies to showering. When an inmate is taken out of his cell, he has to turn around inside the cell and push his hands behind his back through the opening. He is then cuffed, the door is opened and he is accompanied by an official to the courtyard.

“The door is unlocked, the offender enters the courtyard, the door is locked, he pushes his hands behind his back through an opening in the courtyard door and is un-cuffed. When accompanied back to his cell, the same procedure is followed at the courtyard door and cell door. The inmate is never in the same space as other inmates. Inmates cannot see one another, as the cell doors face the same direction and there are no cells on the opposite side of the passage.” This is how Van der Westhuizen described conditions in the Phase 1 programme at the prison.

He raised his concerns over the admissions criteria for the prison and specifically about the “discretion” given to the regional commissioner. “The experience of the Judicial Inspectorate suggests possible abuse, especially in the absence of explanations and documentation promised by the Department of Correctional Services (DCS), which have not been forthcoming,” the report states.

“The number of hours per day and the length of time of solitary confinement or ‘segregation’, to some extent allowed for by the Correctional Services Act, exceed international standards, for example, in the ‘Mandela Rules’, providing guidelines.

“The serious negative psychological and psychiatric consequences of prolonged solitary confinement have been emphasised by experts. Some courts in other countries have found it to be cruel or inhuman punishment, or torture, prohibited by international law, as by the South African Constitution,” Van der Westhuizen continued.

He said the phased “behaviour modification programme”, at the prison is supposed to last three years, with a minimum of six months in Phase 1, depending on inmate behaviour.

“Some inmates have been in Phase 1 and its ‘Special Care Unit’ for years. One has been there for more than four years and another for almost a decade,” he said.

“Conflicting information has been given to JICS about depression and healthcare. In 2016, the inspecting judge was informed by the Regional Commissioner that all inmates were on antidepressant medication. This was later denied. The requirements of oversight and medical care prescribed in the Correctional Services Act are not followed,” he said, explaining that the department claims the section of the law is not applicable to the Ebongweni prison.

“Prolonged solitary confinement under super-maximum conditions should be administered for security purposes. Evidence and allegations seem to suggest that it is used to punish and to extract confessions or information out of inmates,” he wrote in his report.

He further stated that while the inspectorate’s reception at the prison has always been polite and friendly, the department has failed to provide any of the documentation that he has requested. This he described as both “frustrating and worrying”.

He had requested information from the national commissioner about the admission criteria to Ebongweni, all policies, programmes and practices related to the number of hours and length of periods in solitary confinement, medical conditions, personal hygiene and contact with family members.

Van der Westhuizen said he also requested the national commissioner to investigate the alleged abuse of admissions criteria and provide a list of inmates admitted to Phase 1 at the prison with details on their length of stay and reasons for this by 31 May 2020.

His report further recommended that the department strictly adhere to requirements and procedures in the Correctional Services Act, and that the minister considers amending the act to bring it in line with international law and the Constitution.

Judicial Inspectorate of Correctional Services spokesperson Emerantia Cupido said they have received no response from the department yet.

Selepe said since being sentenced, he had been transferred to several prisons and has always been told that “Westville prison was full”. He is keen to stay in this prison as he claims his family lives only 9km away and can walk there to visit him.

His transfers included a one-day stay in the Mangaung Private Prison in Bloemfontein in November 2013. According to letters that form the addendum in this case, he was then sent to Ebongweni Supermax for the first time two days later “after the death of an inmate”.

Selepe said he had not been implicated in the death of the inmate. According to papers before the court, however, the department of correctional services’ Arnold Mbono claimed in a letter to Selepe’s attorneys that he had been sent to the supermax facility for “misbehaviour”, involvement in gang activities and being disrespectful of prison officials.

Selepe described conditions in the prison as difficult, saying that they are being segregated in windowless cells and only let out for an hour a day. He said the showers were cold, the taps and toilets were broken. “There are no doctors, only a nurse.”

Department of Correctional Services spokesperson Singabakho Nxumalo said he had not seen the report by the judicial inspectorate and will only answer questions after he has read it. A spokesperson for the minister of justice and correctional services, Chrispin Phiri, did not respond to a request for comment. MC