Different stages of development for Proteas’ women and men 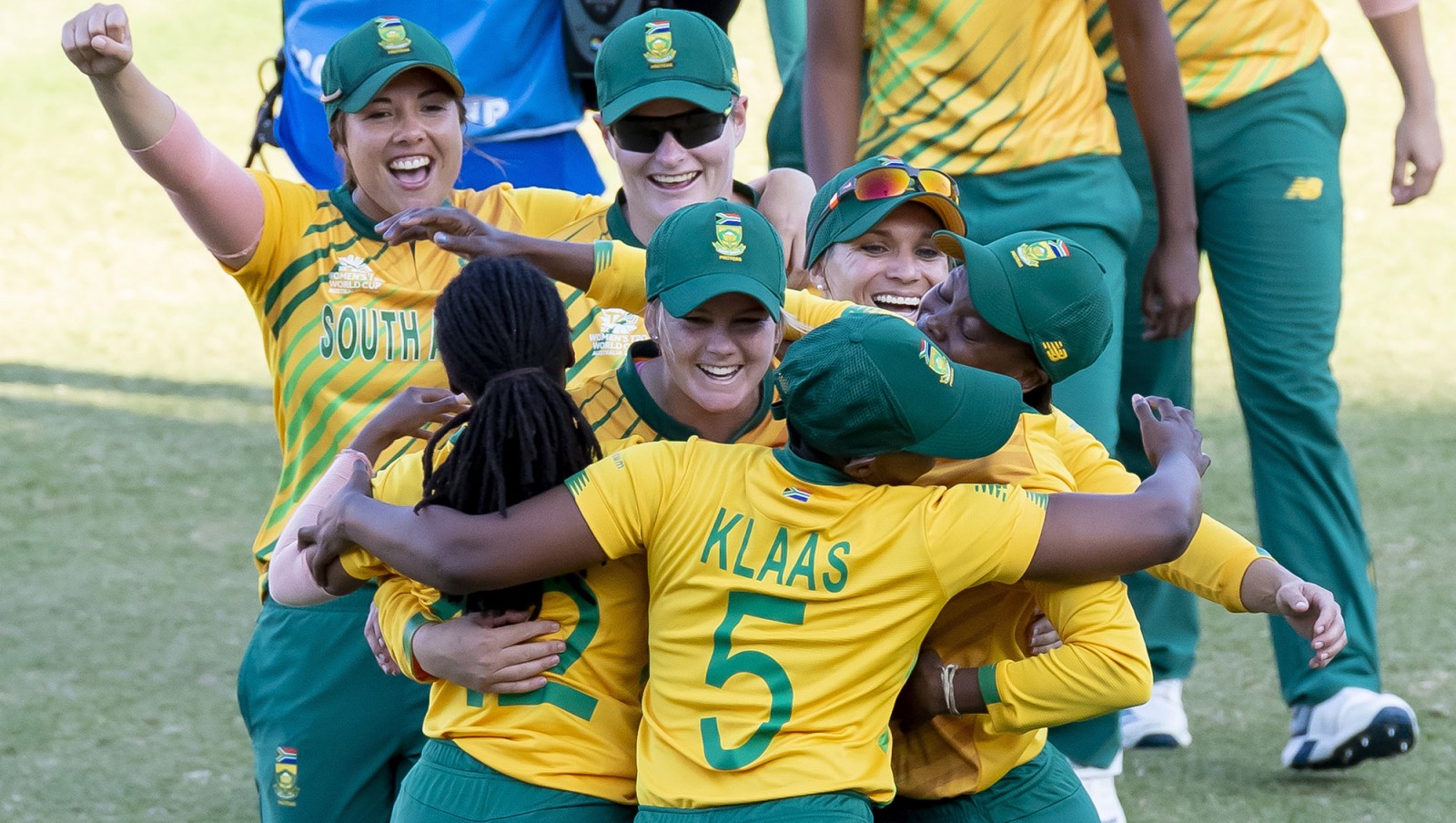 The Proteas are into the semifinals of the Women’s T20 World Cup with a game to spare while the Proteas men’s side pulled off an unlikely win over Australia at the weekend. The results underlined the settled nature of the women’s team while highlighting the men’s continued inconsistency as they rebuild.

The Proteas women’s team became the second side after India to book their place in the semifinals of the T20 World Cup being played in Australia when they secured a 17-run win over Pakistan in Sydney.

It was the Proteas’ third straight win at the tournament, which included a superb victory over England and another over minnows Thailand in Group B. Taking a maximum six log points from their first three games completed South Africa’s first objective of semifinal qualification.

India, who surprisingly beat Australia in Group A, have completed their four matches and top the standings on eight points in that half of the draw. Hosts and pre-tournament favourites Australia are not guaranteed a semifinal place yet and face neighbours New Zealand in an effective quarterfinal on Monday. The winner goes into the semifinals and the loser exits the tournament.

South Africa’s women still have one more match – against the West Indies tomorrow – and they have the luxury of being able to experiment and look at some different selections if they choose. But they’re more likely to opt for continued momentum.

For South Africa’s women, Sunday’s win over Pakistan had moments of difficulty. They were asked some tough questions. And a new face answered them.

Instead of the ever-reliable batting of Marizanne Kapp, Mignon du Preez and Lizelle Lee, it was left to Laura Wolvaardt to provide the runs.

Wolvaardt came to the crease with the Proteas struggling at 54 for three halfway through their innings. Through a combination of skill, courage and temperament she powered South Africa to 136 for six at the completion of her innings.

Wolvaardt, who has postponed her medical studies to pursue her cricket career, scored 53 not out, which included 33 from her final 15 balls. The team scored 29 off the last two overs. It was those critical extra runs that pushed the target beyond a good Pakistan team.

The runs were backed up by some impressive seam bowling from Shabnim Ismail (1-17 in four overs) and Nonkululeko Mlaba (1-20 in four overs) in another demonstration of the successful long-term planning for this tournament.

Cricket South Africa (CSA) Women’s Academy is gaining traction with another 22 players in the programme in June 2020 while there are more competitive matches for the Proteas than there were three years ago.

Momentum has come on board as a women’s sponsor at the same time as they are threatening to quit as sponsors of the men’s game. It’s another valuable boost for the programme.

All that’s missing is a competitive domestic league, but in its absence, top players have been honing their skills with the best in the world.

After a group phase exit from the 2018 T20 World Cup, several of South Africa’s players earned contracts in Australia’s Women’s Big Bash League. (WBBL) It’s the biggest and most lucrative competition women’s players can participate in and as a result, draws the best players in the world.

Wolvaardt has played for the Brisbane Heat along with Sune Luus. Du Preez and Lee represented the Melbourne Stars, Chloe Tryon the Hobart Hurricanes, captain Dane van Niekerk and Kapp the Sydney Sixers while Ismail has played for the Sydney Thunder. Eight players who have participated at the highest level in Australia where the T20 World Cup is being staged, have all performed at the World Cup. Their Australian experience is paying off.

“It’s been quite a journey for me to kind of get my spot here on this T20 side, and it’s been something that I’ve been working on pretty hard,” Wolvaardt said after the win over Pakistan.

“I guess I always focus on my basics, and I guess if the base is really good, you can kind of go on from there. It is something I’ve been working on really hard on figuring out my approach and my plan. I’m happy it’s finally showing in the games now.

“It really meant a lot to me. I think it’s probably the biggest contribution I’ve made to this team, if I think about the importance of today and the World Cup. I’m really happy things worked out the way they did.”

After a summer of boardroom battles and frequent losses for the men’s team as they rebuild under new coach Mark Boucher, the women’s success in Australia is something Cricket South Africa (CSA) are happy to crow about.

“It has been impressive the number of different players who have come up with the match-winning performance when it was needed. Not to forget the players who have achieved personal landmarks.

“The team is clearly in a very good space heading into what is going to be the biggest week in the history of women’s cricket in South Africa.”

The semifinals take place on Thursday with the T20 World Cup final scheduled for Sunday.

The men’s team, meanwhile, earned a massive 74-run win over Australia in the first One-Day International (ODI) in a sweltering Paarl on Saturday. Batsman Heinrich Klaasen was the star performer with an accomplished 123 not out off 114 balls – and innings that mixed power with savvy. Klaasen was backed up by David Miller who scored 64 before paceman Lungi Ngidi led the fight in the field with three for 30 from his 10 overs.

Posting 291 for seven, the value of scoreboard pressure told on the Australian batting. Only an 84-run partnership between Steve Smith (76) and Marnus Labuschagne (41) gave the Proteas any real concern and once it ended wickets tumbled.

It was a welcome result for the Proteas men’s team after T20 series losses to England and Australia this summer as well as a Test and ODI series loss against England.

Boucher has been searching for players with the right technique and mental strength to cope in the unforgiving international arena. It feels like with each passing match, Boucher and the team are edging closer to that objective, especially as they have had to face two outstanding opponents.

For the bulk of the summer, the team has relied too heavily on Quinton de Kock to provide runs – in all formats of the game. It was a welcome change to see Klaasen stepping into the breach after De Kock went early in Paarl.

“It’s not the Quinton de Kock show,” Klaasen said. “He is an incredible player, but we can’t put all the pressure on him. The coach has been asking for someone else to step up. Quinton can’t bat for 50 overs on his own.”

After being dropped from the Proteas squad in December 2019 after a torrid tour of India (where the Proteas lost the Test series 3-0), Klaasen has done his bit.

He scored 453 first-class runs this summer at an average of 51.62 and 162 runs at 40.50 in the One-Day Cup competition. He also scored 66 in the second T20 international against England at Centurion in February.

On Saturday, Klaasen had to mix aggression with circumspection on a difficult, slow pitch. It was exactly the type of mature innings Boucher wants to see from the top order. He needs to identify players who can adapt and cope in different conditions and Klaasen’s innings was an indication that the message is filtering through, even if there will be more losses in future.

“The message came out from the coach to say, ‘You are doing a good job,’ ” Klaasen said. “He said if we go three or four an over for the next 15 overs, he was happy. We didn’t have to worry about trying too many things, just take the low-risk option.”

It was a rare good weekend for South African cricket, but it’s only one step forward. The women’s team face the biggest seven days of their lives and can become national heroes and propel the sport into the mainstream if they are successful. The men are slowly regaining the trust and love of the nation, but they desperately need a series win to validate their rebuilding process. DM