Food for thought: Until policy meets action, hunger and poor nutrition will stalk the land 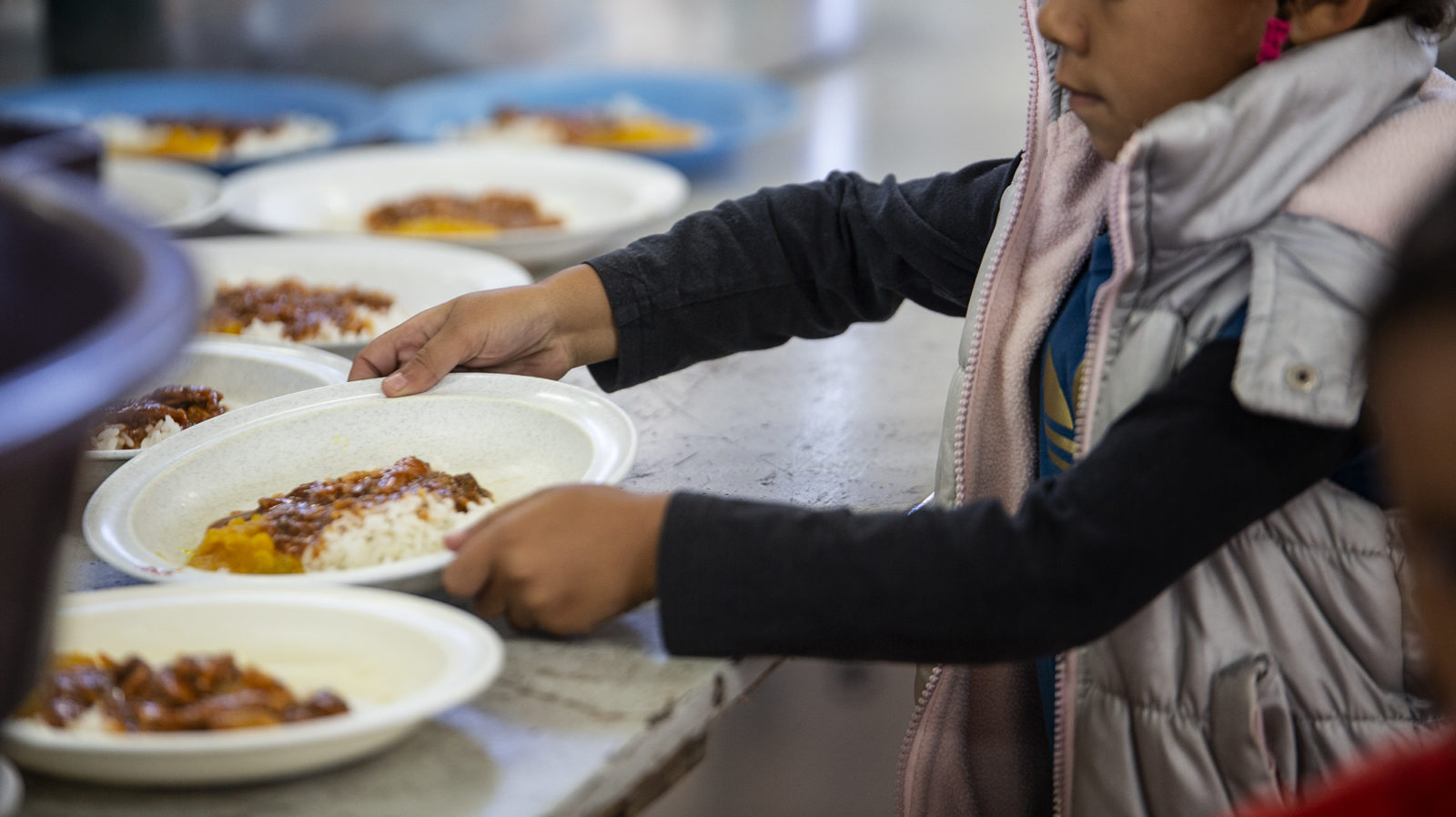 A learner collects a meal in her school hall. (Photo: Leila Dougan)

On paper, the South African government has approached food and nutrition security in what appears to be a co-ordinated manner. But in reality, structures responsible for co-ordinating the implementation of policy and action remain largely dysfunctional.

The outcomes of food and nutrition security (FNS) interventions in South Africa have often fallen short of policy objectives due to weak or missing co-ordination mechanisms. Solving these policy co-ordination failures is not easy.

If the nature, extent and causes of co-ordination problems are not accurately identified, then proffered solutions are unlikely to be effective and lasting. co-ordinating food and nutrition policy shares a lot in common with policy cycles that are characterised by multiple actors, conflictual institutions, socioeconomic change and fragmentation.

There are three areas that need exploring to address the problem of food and nutrition security.

Finding integrated and holistic solutions to poor dietary intake and nutrition-related illnesses are the overriding preoccupations of modern food and nutrition policy. This stands in sharp contrast to the traditional focus on maximising the production of staple crops and animal-sourced foods.

Modern and traditional agro-food systems pose different policy co-ordination problems. In the traditional model, household farming dominates, with farmers producing mainly to feed the household. It entrusts the co-ordination of food policy to agricultural ministries, operating through hierarchies of national and sub-national structures as is currently the case in South Africa.

While this model to co-ordinate food policy might have been useful in the past, it is out of sync with farming, agro-food processing and retail networks that span nationwide or global scales and that are well beyond the reach and capacity of agricultural ministries. Policy co-ordination in modern agro-food value chains is far more complicated because the movement of food from farm to fork involves competing actors and diverse markets. Furthermore, this food system is not just about dietary quality for nutritional health and a better quality of life, but also to produce, distribute and consume nutritious food in ecologically sustainable ways.

A look at South Africa’s food and nutrition policy landscape since 1994 shows that its co-ordination has been inseparable from political contestation.

The conception and design of food and nutrition policy, especially at the national level, took the lead from macro-development imperatives and strategic political decisions. The Reconstruction and Development Programme (RDP), grounded in the idea of satisfying everyone’s basic needs, was a leading impetus behind the first wave of post-1994 food and nutrition policies.

It inspired, for instance, the right-to-food clause in the 1996 Constitution and the adoption of the 2002 Integrated Food Security Strategy (IFSS), the first overarching and consolidated framework for food policy. Even though the IFSS marked a significant achievement, it reinforced a food availability and rural bias in policy and was weak or silent on how to counter the growing malnutrition or “hidden hunger” crisis.

Another shortcoming was its almost complete isolation from piecemeal measures such as zero VAT on staples in the food baskets of poor consumers. Interventions like regular food price monitoring, nutritional healthcare assistance and nutritious meals for school children were never integrated into the strategy.

The IFSS did not actually facilitate the development of an integrated and holistic policy reference point. Studies questioning the participatory nature of conceptualising and designing the IFSS have critiqued its top-down development, bypassing many civil society organisations.

In 2012, government unveiled its new macro-development agenda, the National Development Plan (NDP), which confirmed FNS as a policy priority. Moreover, this prioritisation also boosted prospects for overcoming the shortcomings of the IFSS.

Large sections of the NDP chapter with proposals to restructure and grow the agricultural sector also put forth implications of this restructuring for food policy reforms. Together with discussions of dietary quality and nutritional health elsewhere in the NDP, it shifted the conception of food and nutrition policy towards a multifaceted perspective.

In terms of process, the NDP assembled the latest insights from diverse fields of science to back its developmental vision and advocacy for urgent action. However, this process stopped at a discredited model of consulting civil society voices instead of intensive and structured participation of communities in policy development. Among the policy revisions that the NDP stimulated, two stand out.

First, it promoted tighter cooperation across government departments around the strategic priorities of the state. Towards this end, it aided the construction of a framework, known as signed outcome delivery agreements, through which the president holds a minister accountable for executing a strategic priority in government’s programme of action. Outcome Seven deals with agriculture and rural development, and also concentrates on food security, outlining indicators for most dimensions and responsibilities per department.

Second, the NDP bolstered the rationale and urgency for the National Policy on Food and Nutrition Security (NPFNS), eventually replacing the defunct IFSS. Thinking embedded in the NDP, particularly the multi-faceted nature of FNS, manifested in the 2014 NPFNS, with diverse state and non-state actors helping to refine the new policy. It has been translated into five-year action plans that provide for national and subnational co-ordination structures.

There has, however, been very little movement towards the setting up of these structures. There has only been the establishment of a National Food and Nutrition Security co-ordinating Committee chaired by the Department of Planning, Monitoring and Evaluation (DPME) mainly to steer the implementation of the six strategic objectives of the NFNSP. Setting up functional national and subnational Vulnerability Assessment Committees (VACs) with international donor support also struggled to gain traction with a limited number of directorates in the department of agriculture occasionally attending irregular South Africa Vulnerability Assessment Committee (SAVAC) gatherings.

In provinces of acute hunger, ad hoc and unco-ordinated responses dominate, with SAVAC unable to mobilise resources across all departments for integrated and proactive assistance to vulnerable people. co-ordinating the implementation of food security efforts has been and continues to be the mandate of the Department of Agriculture, yet the department lacks both the convening powers and the resources required to ensure interdepartmental accountability. Consequently, most FNS-related institutions continue to work in silos.

Co-ordination of metrics, monitoring and evaluation

South Africa does not currently have an official measure of food and nutrition security, or a coherent FNS information system, either at national or sub-national levels.

While the 2017 NFNSP includes a list of possible FNS indicators, these have not been officially adopted as the standard FSN indicators across various government departments and agencies as well as civil society actors. The lack of cooperation and convergence among different state and non-state actors vis-à-vis FNS information collection, analysis, management and dissemination has compromised action across the policy cycle. This has resulted, for example, in the lack of standardisation of FNS information being collected in different areas, resulting, in most cases, in a large number of poorly targetted and poorly streamlined indicators; as well as different frequencies in the collection and dissemination of similar types of FNS information.

The Food Price Monitor, a flagship initiative led by the National Agricultural Marketing Council (NAMC), was originally conceived as an early warning tool to trigger targetted and well-co-ordinated interventions against the negative effects of food price inflation on hampering access to nutritious food and worsening malnutrition.

How this resource-intensive information tool on food pricing, heavily reliant on data inputs from Statistics South Africa and handpicked academics, is utilised across the food and nutrition policy cycle is unclear. Food price monitoring has been restricted to a mechanical data collection and reporting routine that caters for narrow agricultural interests rather than proactive action against worsening malnutrition crises driven by food price inflation.

A systematic programme to monitor and evaluate food and nutrition support programmes is non-existent. This gap is particularly evident for the social grant system as most cash transfers have not been spent on nutritious food since the onus of deciding what to spend the money on lies with the individual. A vital food utilisation and food quality initiative targeting children from poor families, the National School Nutrition Programme (NSNP), is being implemented without a reliable monitoring and evaluation system.

Despite the sizeable scale and cost of the NSNP, its objectives and priority outcomes have been vague, further complicating how to monitor and evaluate it. It is unclear what the NSNP is trying to achieve beyond simply delivering meals to school children, what difference the programme is making in children’s nutrition and scholastic performance, and what planning and organising is needed to make it work better.

What needs to be done?

Realising the socioeconomic and political imperatives of adequate nutrition for all demands seamless and dynamic integration of policy actions across all aspects of policy processes. To this end, this article proposes the following urgent actions: