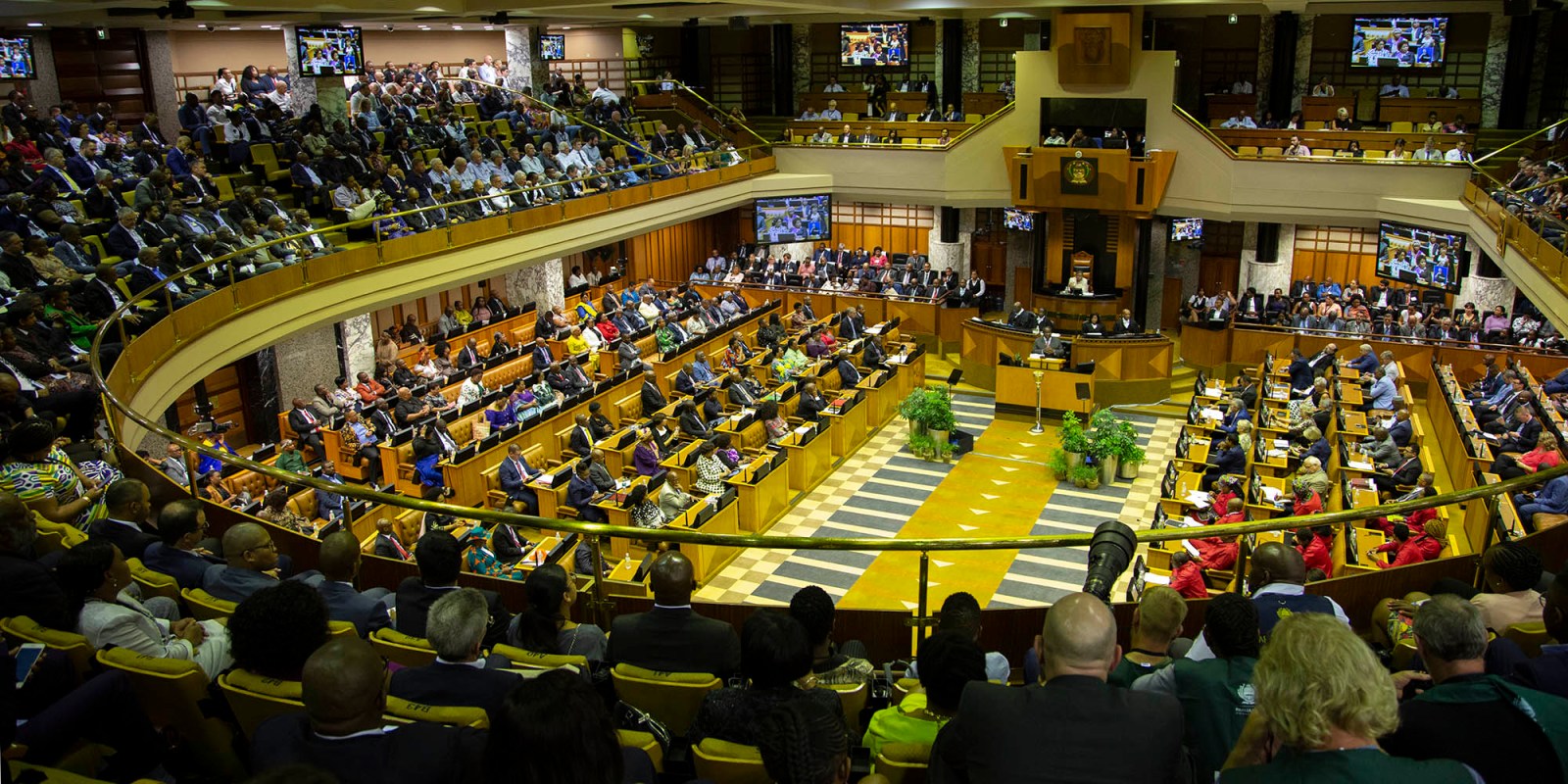 Finance Minister Tito Mboweni is not a coward. He is taking on the unions. And they are ready, willing and able to respond. Parliament during a Budget is an interesting place, clever people in good suits. Some are gloomy, some are friendly, all want to know what will happen next.

Arriving at Parliament for a Budget instead of a State of the Nation Address is a completely different experience. Instead of the steel and attitude, you get a nod through security, a smile at the suitcase (TV requires more clothes than radio) and even a personal greeting from the person at the accreditation desk. It came with a smile and a little tag to show that I was allowed where I was.

The first thing you check when you find you’re doing an outside broadcast at Parliament is the weather forecast. It can be unbelievably hot and muggy. Not a good look. Not a good feeling. The forecast this time was gloomy. Taxes would be up, Eskom was going to hang over everything, the gloom was palpable.

First stop was the TV studio, the little box created by Newzroom Afrika that would see me interviewing people and basically getting anticipation, reaction and vibe.

The first person in the chair was Martin Kingston, the vice-president of Business Unity SA, and recently, a former SAA board member. He’s always good for a chat, and a quick swap of gossip. He’s one of those people who act as movers and shakers, but usually in a quiet way. This time, he was incredibly downcast. Basically, his message was that we were now pretty much out of time. The die was cast, choices had to be made.

Anyone who has worked with me for a long period will tell you that the way to deal with me when I’m gloomy, annoyed, tired (or happy) is simply to guide me towards lunch. There it was, in glorious wrap form. There was a time, not that long ago, when the idea of a vegan wrap would have been laughed at in all good newsrooms. People would have guffawed, the smoke billowing out of their noses, as they asked whether gin was a “vegan” product.

Things have changed. The generations younger than me (notice the “s” in that statement) are healthier, fitter, and eat better. Thankfully, they had made allowances: there was a chicken option too.

Somewhere in the middle of all of this, I managed to finagle my way into the media centre, as a large group of people was walking out. Tito Mboweni, the governor emeritus, professor, and today, finance minister, was in the middle of the train, the carriage most closely guarded. Despite that, he did what he has always done, stop, greet, shake a hand, nod a head, ignore a question, and move on.

Considering the gravity of the day it was a nice gesture that he didn’t have to make.

Finally, he was on his feet in the National Assembly. There was a time, long ago, when to find out what the finance minister was actually saying meant you actually had to listen to him say it. Not any more. Now, as journalists Wi-Fi themselves out of the lock-up from which they have been captured (careful Stephen, the meaning of that word has changed too, you know… – Ed), all of the Budget is suddenly public in all of its glory.

One of the first tweets I saw was from that amazing personal finance journalist Maya Fisher-French. She said it was the most surprising Budget in 15 years. More importantly than that, there were no tax increases.

Read my lips. No new taxes.

Then came the avalanche. Gosh, I thought. R160-billion in savings on the government wage expenditure deal. It’s on.

The unions are going to go nuts. Indeed, within about two hours they had. They were angry. Crosser than cross. Furious, in fact.

This has been brewing for years. Finally, the laws of economics and finance have caught up with us. And we can defy economic gravity no longer. Decisions and trade-offs have to be made. The unions and their members are the ones who are going to suffer. This is likely to be the dominant political dynamic of the next few months. It’s going to make SAA look like a picnic.

Talking of which, another R16-billion to SAA. There is some contestation on the maths involving the difference between a “bailout” and a “loan guarantee”, but at least R8-billion has gone to SAA over the years. This means that it will now be R24-billion. Which is a lot.

Eventually, Mboweni started to wrap up and it was time to start work.

The Newzroom Afrika producers had been working overtime. Mboweni himself, it appeared, was not doing interviews. But Deputy Finance Minister David Masondo was.

Intriguingly for me, he and I had never actually met or even spoken before. In person, he was warm, a good friendly handshake, and a quick chat about TV and Daily Maverick (he may have something in common with you, Dear Reader). It was all very pleasant while we got down to business.

First up, of course, does he really believe that the unions are going to accept job losses in government? He gave a long answer, suggesting there was really no other way around this problem, and that deep reform was needed. The government needed more teachers, nurses and police officers, but we could not continue like this, he said.

I asked him whether he thought next year’s Budget would be as tough to draw up as this one had. It’s a complicated question, asking a politician to guess the future. He was optimistic, but said a lot of work still had to be done.

That was the general feeling of the experts. Power FM’s Ayabonga Cawe was clear that the unions won’t be a pushover. Isaah Mhlanga from Alexander Forbes said this Budget could only be felt if it was properly implemented. I had to make sure that I introduced our next guest properly. Iain Williamson is the acting CEO of Old Mutual. If I dropped the “acting”, Peter Moyo’s lawyers might spot a gap.

Everyone felt that this was a good Budget, that this could fly. The question is, on how many routes? Already, Cosatu has slammed the Budget. The SACP has, in step with its office landlord, suggested that this Budget could contain the roots of social conflict. That’s a strong comment.

It was time to go. The studio felt like an oven, then a warming drawer. The sun was not quite beginning to sink (this is Cape Town) but was noticeably less hot. Mboweni has fired the first shot in what is going to be a long and difficult battle. He is clearly up for the fight and the unions are ready. The next move is likely to be for one of the parties to try to determine the playing field. Is it court, the ANC, the streets? The answer could tell us where they feel strong and where they feel weak.

Leaving Parliament was easy. My Uber literally rocked up under the statue of Louis Botha. And that’s a debate we seriously need to have. DM