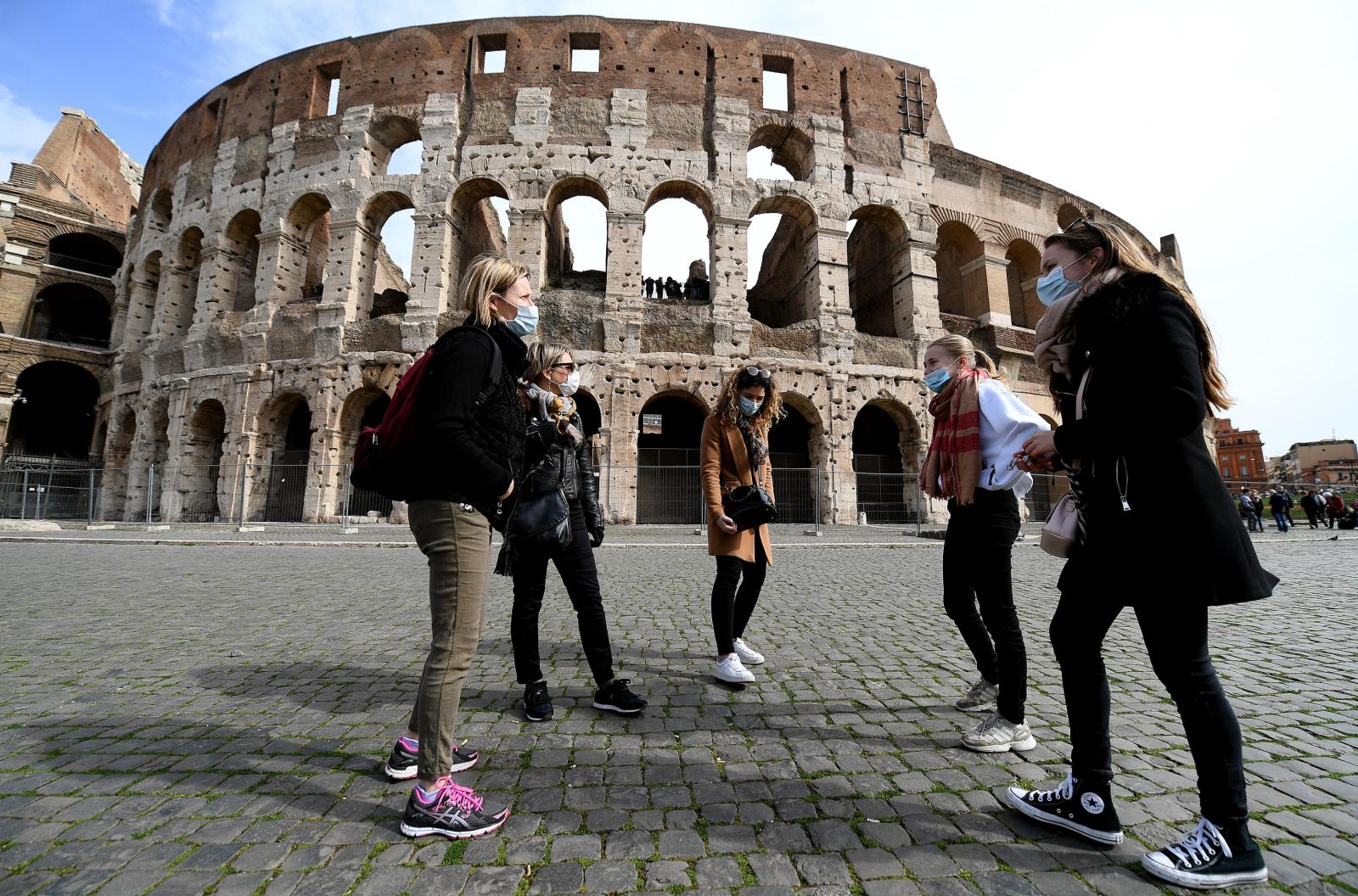 epa08249195 Tourists wearing protective face masks visit Rome, Italy, 26 February 2020. According to the latest official statistics, more than 370 people have been infected by the Wuhan coronavirus, and at least 12 have died of COVID-19 in the Mediterranean country so far. EPA-EFE/ETTORE FERRARI

Governments ramped up measures on Thursday to battle a global pandemic of the coronavirus as the number of infections outside China, the source of the outbreak, for the first time surpassed those appearing inside the country.

Australia initiated emergency measures and Taiwan raised its epidemic response level to its highest, a day after U.S. President Donald Trump put his vice president, Mike Pence, in charge of the U.S. response to the looming global health crisis.

The United States and South Korea postponed joint military drills to limit its the spread of the virus, which has emerged far beyond China, where it originated late last year, apparently in a market selling wildlife in the city of Wuhan.

Australian Prime Minister Scott Morrison said his country was operating on the basis of a pandemic and hospitals were under orders to ensure enough medical supplies, personal protective equipment and staff.

“There is every indication that the world will soon enter a pandemic phase of the coronavirus,” Morrison told a news conference in Canberra.

“As a result we have agreed today and initiated the … coronavirus emergency response plan.”

Oil and Asian share markets extended losses as the rapid global spread of the coronavirus kept investors on edge and seeking safety in gold and bonds.

Stock markets globally have wiped out $3 trillion in value this week, as measured by the MSCI all-country index that comprises stocks across 23 developed and 26 emerging markets.

The coronavirus has infected more than 80,000 people and killed nearly 2,800, the majority in China.

Its rapid spread in different places – notably Italy, Iran and South Korea – in recent days met the definition for a pandemic, and raised alarm.

Denmark became the latest country to confirm a case, in a man who returned from a ski holiday in Italy.

China reported 433 new cases on Thursday, against 406 a day earlier.

South Korea reported another 334 new coronavirus cases on Thursday, pushing its total to 1,595, the most in any country other than China.

The U.S. State Department issued a new travel warning for South Korea after the U.S. military reported on Wednesday its first case of the coronavirus, in a 23-year-old soldier based near the South Korean city of Daegu.

The South Korean military has also reported a number of infections and confined most troops to base.

A “command post training”, usually conducted by members of the two militaries’ Combined Forces Command, will be postponed until further notice, the command said.

U.S. health authorities reported the first possible case of community transmission in the United States involving someone who had no relevant travel history or exposure to another known patient. The United States is managing 59 cases – most of them Americans repatriated from a cruise ship in Japan.

The number of confirmed cases of the virus on the British-registered Diamond Princess approached 700 with four deaths since the ship docked at a Japanese port on Feb. 3.

Trump, seeking to calm U.S. stock markets which fell for the fifth day, said the risk from the virus was “very low” in the United States, and it was “very very ready” to face the threat.

Chinese authorities said the number of new deaths stood at 29 on Thursday, the lowest daily tally since Jan. 28. The virus that can lead to pneumonia has now killed a total of 2,744 people in China, most in the central province of Hubei.

Italy reported another 100 cases nationwide, taking the total in Europe’s biggest hot spot to more than 400, while its death toll rose to 12.

A hotel in Tenerife, in Spain’s Canary Islands, remained locked down for a second day on Wednesday with more than 700 guests, over cases linked to Italy.

There have been nearly 50 deaths outside China, including 19 in Iran, according to a Reuters tally.

Iraq on Wednesday banned public gatherings and barred entry by travellers from Kuwait and Bahrain because of the spread of the new coronavirus.

Saudi Arabia suspended foreigners’ entry for the Umrah pilgrimage and tourism from countries with new coronavirus cases. The kingdom has no cases.