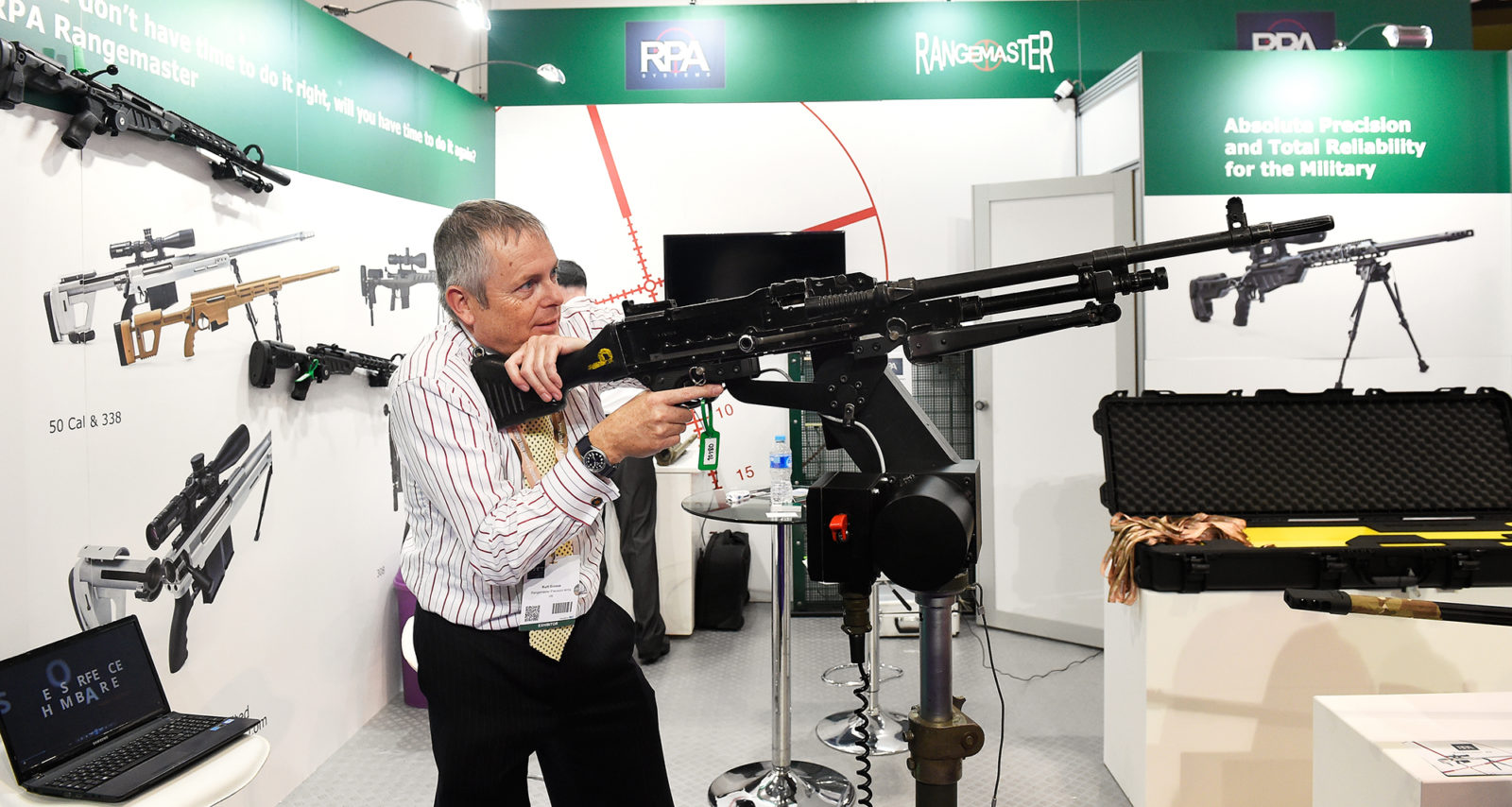 The Welsh government spent £95,000 attending a controversial arms fair despite the country’s socialist First Minister Mark Drakeford criticising weapon sales to many repressive regimes in attendance, it has emerged.

A dozen officials from the Welsh Labour-led government spent a week at the biannual Defence Security Equipment International (DSEI) in the London docklands in September 2019.

The presence of Welsh officials at DSEI was criticised during the event by the opposition party Plaid Cymru, but this is the first time the full costs have been revealed. Delegations from authoritarian regimes such as Saudi Arabia and Turkey were among the most prominent visitors to DSEI, sparking protests from campaigners and more than 100 arrests.

The Welsh government’s presence at the event was controversial because it is led by the Labour Party, whose manifesto expressed concern over arms sales to Saudi Arabia and other human rights abusers.

Drakeford, an ally of UK Labour leader Jeremy Corbyn, said after criticism of Welsh government involvement that he will review whether Wales should support the event in future.

Welsh officials used their stand at DSEI to host a two-hour networking reception for 65 people, according to information gleaned by Declassified through freedom of information requests.

The officials spent £468 on food plus £1,482 for a “drinks package which included 2 glasses of wine per person, Welsh beer, unlimited soft drinks, ice, hire of glassware and tableware”. More than £7,000 was spent on hotels in London for the week, as well as several thousand pounds on travel from Wales.

However, when asked for details of their meetings during the event, the Welsh government claimed that it held no records. It would only clarify that its officials had one interaction with a Turkish delegation and no contact with Saudi visitors.

Turkey has been criticised by the Welsh Labour Party for its military’s attacks on Kurdish civilians.

In May 2019, one of Drakeford’s Labour colleagues, Eluned Morgan, asked Britain’s Foreign Office to raise the case of Imam Sis, a Kurdish man resident in south Wales who spent 161 days on hunger strike in protest at Turkey’s imprisonment of Kurdistan Workers Party leader Abdullah Ocalan.

At the DSEI arms fair, the Welsh government stand was situated among numerous armoured vehicles built by Turkish arms firms such as Nurol Makina, which also manufactures water cannon for the Turkish police.

Paul Landricombe, head of marketing at Wales’ Department for Economy and Transport, told Declassified that the Welsh officials were at DSEI to “field FDI [Foreign Direct Investment] enquiries and to support the six Welsh businesses who were on the stand”.

These included Drone Evolution, a tech firm based in Caerphilly, South Wales, which manufactures a drone that can “repel jamming and physical attacks”.

Other firms included Bangor-based Denis Ferranti, which makes parts for nuclear submarines; Arcanum, a cyber firm in Carmarthenshire, southwest Wales, that supplies secure IT systems to the British army; and Radnor Range, a munitions testing ground for global arms companies.

Visiting Oakdale: Declassified UK takes a look at the arms industry in Wales

Wales has a major role in the UK arms industry, with the Ministry of Defence spending £310 per person to support the sector in the country, totalling almost a billion pounds worth of expenditure in 2017/18.

This level of military spending is above average for the UK as a whole and higher than in Scotland or Northern Ireland.

Some of this money has been put into the picturesque valleys of South Wales, where the rural towns – often thought to have been “abandoned” when the mining pits were closed down in the 1980s – have become unlikely hubs for arms manufacturing.

Declassified visited one such example, the former Oakdale Colliery, which used to employ almost 2,000 miners before it was closed down in 1989, leaving the area facing post-industrial ruin.

Under Tony Blair’s Labour government in the early 2000s, the local council received European Union “Objective 1” status – awarded to regions falling behind the rest of Europe in terms of development – and £1.2-billion was made available to restart the economy.

This investment transformed the derelict colliery into a 40-hectare business park. Upon arrival, EU logos are proudly displayed on signposts that disclose the park’s funding.

Beyond these signs lie a series of office complexes belonging to General Dynamics, a US arms company that has come to dominate the site as the major employer. It produces radio equipment for the British military and caused controversy in 2011 when it was reported that some of the workers from Oakdale had been quietly posted to Libya as part of a contract worth £85-million to upgrade military communications for Colonel Gaddafi’s regime.

The revelation caused a row over General Dynamics’ sponsorship of the nearby rugby club in Gwent, with 100 peace campaigners calling on the sports team to sever its ties with the arms company. The area has a long history of political protest, stretching back to Chartist pro-democracy campaigners and active trade unions during the 1980s miners’ strike.

General Dynamics also has a £4-billion Ministry of Defence (MOD) contract for the maintenance of hundreds of “Ajax” armoured vehicles for the British army, which it is claimed underwrites 300 jobs at Oakdale.

For a community that used to depend on mining, skilled engineering jobs like these should be a benefit to the local community. When I contacted General Dynamics to ask for a tour, its press office at first seemed keen to show me around the Oakdale site but later refused my request.

The company also did not respond to questions including how many local people the company employed in the area. Its website claims 900 people are employed across its two sites in South Wales, although it does not specify where in Wales they live or if they commute from the west of England.

The local council is even more ambitious about the Oakdale business park, claiming the site has the “potential to pump 5,000 jobs into the local economy”. To test this assertion, I drove into the nearest town of Blackwood and spoke to some long-term residents about what jobs were available for them at the business park.

“When Margaret Thatcher shut the pits down, they fucked Wales up,” one former miner told me. When I asked if the General Dynamics site had replaced any of those jobs, he said he didn’t know anyone working for the arms company. “School leavers don’t get jobs round here. I’m scared for my 15-year-old son – you try finding an apprenticeship these days.”

Instead he suspected General Dynamics employed people from outside the area, an impression shared by other local residents I spoke to.

“They haven’t listened to us over Brexit,” the man’s friend chimed in, referring to the majority of people in Wales who voted to leave the European Union in the 2016 referendum. The investment that had brought the business park to the area did not appear to have softened attitudes towards the EU. DM