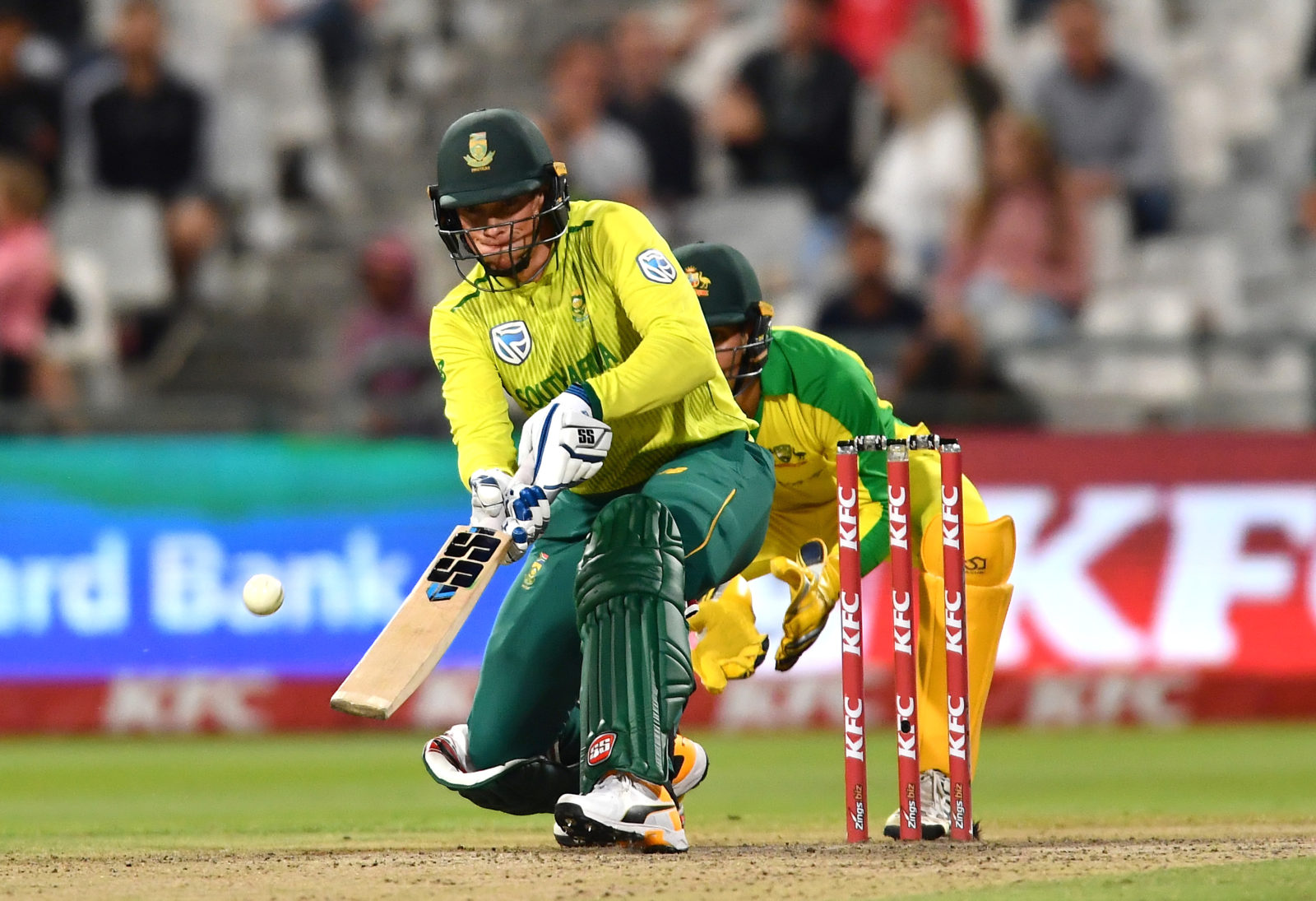 Sometimes cricket doesn’t have to be so complicated. Proteas captain Quinton de Kock drew first blood by winning the toss in the deciding rubber of the three-match T20 series against Australia at Newlands on Wednesday 26 February and immediately threw the initiative away.

The South African skipper chose to bowl first, backing himself and the rest of a brittle batting lineup to chase whatever Australia posted.

Australia, never a team to let a chance to stamp on the throat of an opponent go to waste, piled on the runs and amassed 193 for five in their 20 overs. They ultimately roared away to a mammoth 97-run win as South Africa lost their last five wickets in 17 balls while adding only 17 runs. Australia claimed a 2-1 series victory.

The visitors won the first T20 International by 107 runs at the Wanderers and South Africa claimed the second match by 12 runs in Port Elizabeth. Both times the winning team batted first, yet on Wednesday in Cape Town, De Kock, for reasons only he will understand, chose to rewrite the script.

Once De Kock gifted Australia the chance to bat first, they did their bit and posted a big score and backed it up with some good bowling. But the decisive moment of this match, and the series, came with De Kock’s unfathomable decision to allow Australia the chance to pile on runs and pressure and for South Africa to chase it under lights. There was just no sense to the decision.

A defiant De Kock, who obviously backs his ability with the bat to chase any target, refused to give a satisfactory explanation of his decision-making process.

“It was disappointing the way we lost but we have to keep our heads up and keep looking forward. Even if I could do it again I would still have chased,” De Kock said. “They scored 20 runs above par.”

At least the last part was true, Australia scored at least 20 runs too many. Because they batted without any scoreboard pressure.

Australia has a formidable batting lineup in this truncated form of the game. To beat them over 20 overs, the opposing team needs every little advantage it can muster. So, when the captain wins the toss and decides to give that batting lineup a chance to post a score, thereby taking a small, but vital bit of assistance away from the bowlers – scoreboard pressure – and instead transferring it on to his own team, questions have to be asked about the thought process.

De Kock is a superb batsman, and clearly backs his talent, skill and form to steer his side towards any target. The problem was, that by needing nearly 10 runs an over from the outset, De Kock immediately had to play risky shots to good balls.

Five balls into the chase, the Proteas skipper was trudging back to the pavilion after trying to play across the line to a beautiful straight ball from left-arm seamer Mitchell Starc. The Aussie pacemen dared De Kock to play a high-risk shot against his thunderbolt.

The Proteas skipper took the bait because the scoreboard demanded he had to, and he paid the price. Starc uprooted the middle stump and South Africa’s demanding task became almost impossible with their best batsman out of the game.

Wickets continued to fall regularly as the pressure mounted with each dot ball. The Proteas were dismissed for 96 – the second time in the series they failed to record triple figures. Frankly, it was embarrassing.

“Quinton is a key player and when he gets off to a good start then South Africa get going,” Starc said after winning the man-of-the-match award for figures of three for 23 in 2.3 overs.

“Quinton’s a nice one to get early so we can start getting stuck into the middle order as soon as we can.”

Earlier Aussie captain Aaron Finch, in tandem with David Warner took the gift of being inserted to bat gladly, and proceeded to hammer the Proteas bowling to every part of the Newlands ground. They put on 120 for the first wicket and scored 75 runs in the power play – the first six overs of the innings – which took the game away from South Africa within half an hour of the start.

It wasn’t only the boundaries the pair hit, but also their brilliant running where they rotated the strike and turned ones into twos. It compounded issues for the Proteas.

Finch eventually scored 55 from 37 balls with six fours and a six and Warner 57 from 37 balls with five fours and two sixes. Despite a minor fightback in the middle overs, mainly thanks to one for 25 in four overs from Tabraiz Shamsi, the Proteas had more chance of climbing Table Mountain before the innings break than scaling the mountain the Aussies presented them.

Finch’s assessment after the match added to the feeling that De Kock made a huge error in his decision to bowl first.

“It was nice batting against the new ball and once the lights took effect the ball started moving,” Finch said. “Davey (Warner) and I also pride ourselves in running between the wickets. With a left and right-handed combination with different techniques and styles, the more you can keep changing that up, the run rate goes to 10 an over quickly.”

After failing to defend 222 in the final T20 of the recent series against England, De Kock clearly has little faith in his bowling attack. Given the batting collapses in this series, there is no room for faith in the batting either. It all adds up to a worrying outlook for South Africa with the T20 World Cup in Australia looming later this year. DM

Catch of the Day

"You gotta love livin’, kid. Because dyin’s a pain in the ass." ~ Roger Moore