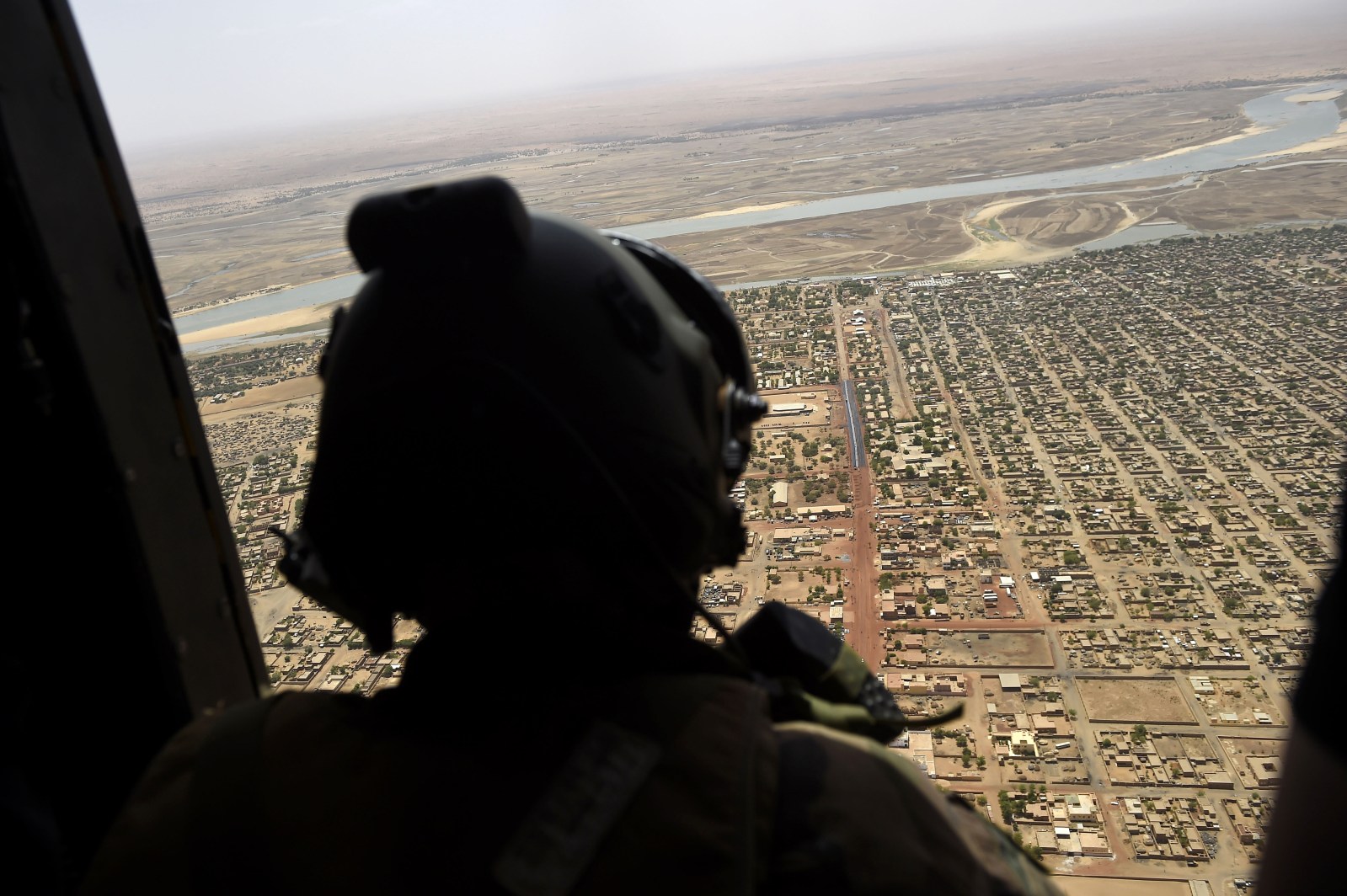 A French soldier stands inside a military helicopter during a visit by French President Emmanuel Macron to France's Barkhane counter-terrorism operation in Africa's Sahel region in Gao, northern Mali, 19 May 2017. EPA/CHRISTOPHE PETIT TESSON

Fraud and favouritism have left the region’s defence and security forces ill-equipped to deal with terrorism.  By Hassane Koné.

Terror attacks on soldiers in Sahel states are raising questions about these armies’ ability to withstand extremist threats and protect their populations. A total of 271 soldiers have died in recent attacks on military camps in Chinagodrar and Inatès in Niger, Indélimane and Boulikessi in Mali, and Koutougou in Burkina Faso – the Liptako-Gourma region (see map below). 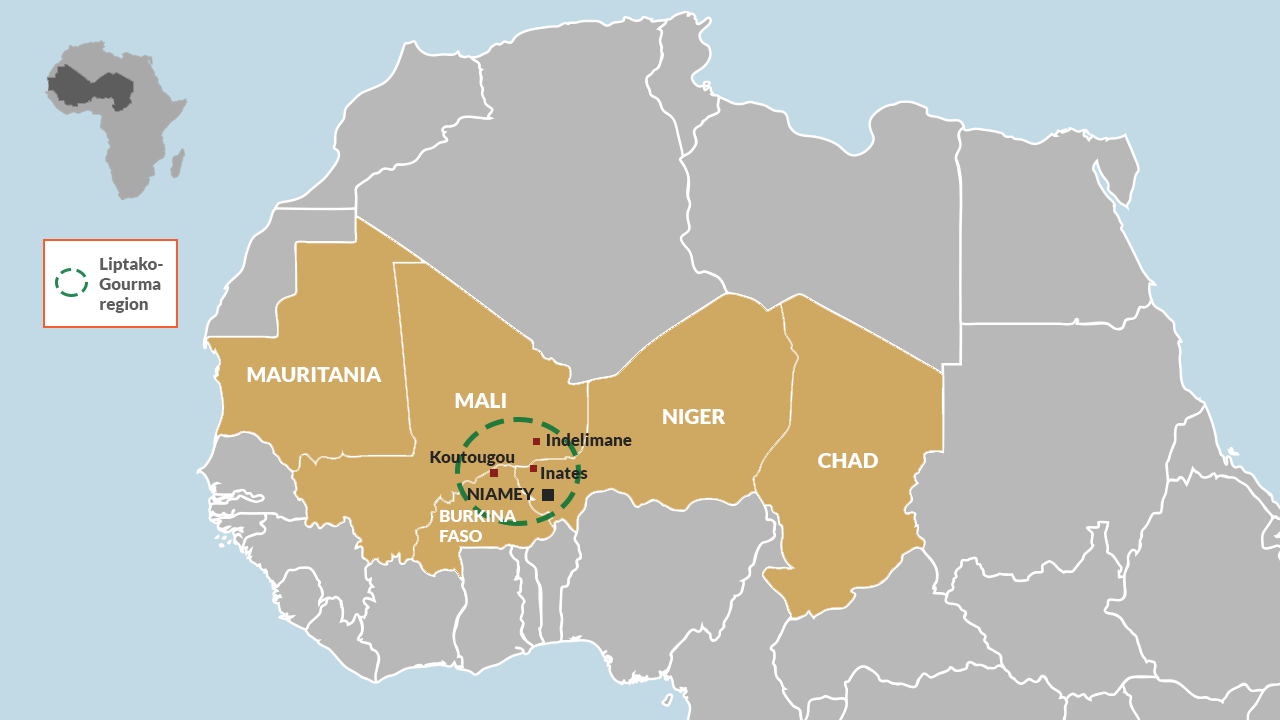 Many others have been wounded, and vital equipment has been stolen. According to the United Nations, more than 4,000 deaths in total due to violent extremism were reported in Niger, Mali and Burkina Faso in 2019, compared to 770 in 2016.

Liptako-Gourma region in the Sahel

How are violent extremists managing to continue these attacks? Why are these armies under-equipped and ill-prepared to deal with this asymmetric threat? Countries are spending massive portions of their budgets on their defence and security sectors – what is going wrong?

The answers are multifaceted. Military governance, and not merely a lack of resources, is a major problem affecting the uniformed corps in most Sahelian countries. Each year, parliaments approve substantial security and defence budgets for the operation of the forces and the purchase of military equipment.

According to the Stockholm International Peace Research Institute, in 2018 Mali’s military expenditure amounted to US$495-million, Burkina Faso’s was US$312-million, Chad’s was US$232-million, Niger’s was US$229-million and Mauritania’s stood at US$159-million. In the cases of Mali in 2015 and Burkina Faso in 2017, military programming laws – establishing multi-year planning of state spending on the armed forces – have been adopted to fill gaps and regenerate these weakened forces.

However, under the pretext of the need for security, the management of this funding is not transparent. Financial operations generally follow procedures that allow public procurement standards to be circumvented. Misappropriation of funds in the procurement of military equipment in Mali is often reported. Similarly, human resources administration in the Sahelian armies (recruitment, posting and promotion) doesn’t always meet the criteria of transparency and competence.

These practices implicitly exempt defence and security institutions from control and audit practices. The management of resources allocated to them falls outside the scope of public bodies dedicated to intervention and oversight. These bodies often lack the latitude to verify whether these institutions (army, gendarmerie and police) comply with management rules.

In each country, a general inspectorate of the armed forces is set up to monitor the operational capabilities of the forces, their level of preparedness, and the administrative and financial management of their resources. But this structure doesn’t always have the independence to execute the missions it is assigned.

General inspections of armies in the five Sahelian countries are only symbolic. They exercise their prerogatives on an ad hoc basis and on instruction by their supervisors. However, they could play an essential role alongside the other actors in the democratic control of the security and defence forces (parliaments, courts of account, military justice courts, codes of ethics and professional conduct, civil society, and the media).

This lack of control has encouraged embezzlement, favouritism and discrimination, which has negatively affected the operational capacity and effectiveness of the defence and security forces. The acquisition of equipment, recruitment and training isn’t always in line with what is needed. The armies of Burkina Faso, Mali and Niger continue to prepare and equip their units for conventional conflicts instead of adapting them to the terrorist threat that is rampant in the region.

Bad governance is one of the main causes of the failure of defence systems in most Sahel countries, which are struggling to cope with their terror threats. States need effective mechanisms for the democratic control of their defence and security forces. Successful security sector transformation that involves a complete change in how the sector is governed could help achieve this.

Budgetary matters and procedures for managing materiel and human resources must be properly audited to ensure compliance with the requirements of good governance. Active and effective inspections would improve the management of resources, maintain a good level of force preparedness, enhance operational capabilities and raise staff morale. It would also help preserve the national character of the armed forces in an environment weakened by growing insecurity.

Of course, strong armies aren’t the only bulwark against the insecurity raging in the region, although they are necessary. A broad-based approach is needed to improve the governance of militaries and their state of readiness so that they can provide much-needed security in the Sahel. DM

Hassane Koné is a senior Research Associate, ISS Regional Office for West Africa, the Sahel and the Lake Chad Basin