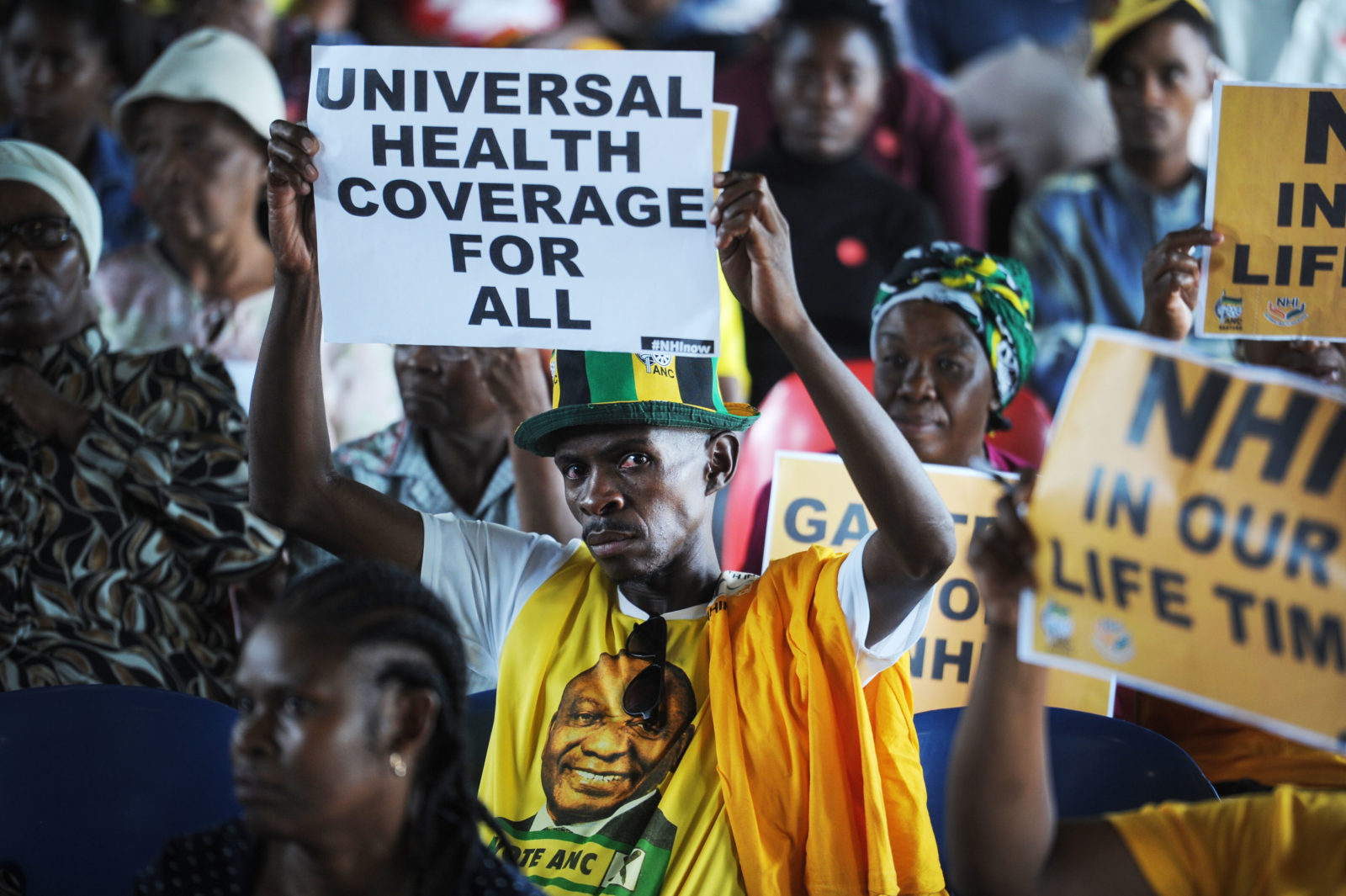 Residents in Kagiso and Soweto express their views on the NHI Bill in February 2020. (Photo: Rosetta Msimango / Spotlight)

Alarm bells are still ringing even as the final public NHI hearings hosted by the Parliamentary Portfolio Committee on Health wrapped up in Gauteng yesterday.

The NHI dream rolled into Gauteng this past weekend with the utopian hopes for South Africa’s national health insurance summed up in a double-page colour pamphlet handed out by the Department of Health at the hearings.

The glossy pamphlet speaks of “ubuntu” and “taking care of each other”, and the stock picture images show big smiles of happy patients and practitioners. The pamphlet states that quality healthcare will be “free through the right referral pathways”, that “government will upgrade all facilities to ensure that there is no difference between a public and private facility” and that “government may introduce a small tax” to fund NHI.

But it was a different story inside the community halls and centres. Members of the Parliamentary Portfolio Committee of Health, who arrived with blue-light escorts and convoys, heard from people who attended the meetings the deep concerns they still have about the bill, including exactly how NHI will touch their lives in terms of costs, funding and access to quality services.

In Gauteng the specifics that were raised included how undocumented migrants, asylum seekers and zama-zamas (the informal miners across the western suburbs) will be absorbed into the NHI, as a registration system will apply.

Inadequate services for mental health patients and health services to the lesbian, gay, bisexual, transgender, queer and intersex (LGBTQI) communities were also flagged as were the sobering finding from the Office of Health Standards Compliance (OHSC). The OHSC’s findings showed that of 696 clinics surveyed between 2016 and 2017 only five met the required norms and standards expected in the NHI.

The Gauteng public meetings were also criticised  by the Treatment Action Campaign (TAC) for taking place after the closing date of written submissions to Parliament on the draft bill, which was on 29 November last year. It’s been reported that more than 100,000 written submissions have already been made.

Spotlight attended the Saturday and Sunday hearings held in Kagiso on the West Rand and in Dlamini, Soweto. The Gauteng hearings (four in total) were the last round of public hearings. They followed the same format as in other provinces, with the chairman of the portfolio committee, Dr Sibongiseni Dhlomo, summarising key points in the bill (copies or summaries of which were available in various languages, including Braille). It was followed by speakers from the public putting their two-and-a-half minute comments to the committee members. No response or direct engagement with individual questions or comments was made.

As with previous hearings, the two Gauteng hearings were marked by delayed starts and late confirmation of venues that were only finalised on the Thursday before hearings got underway in Soshanguve on Friday.

The two hearings were highly politicised, with both the ANC and the DA erecting stands outside the Dlamini Multipurpose Hall on Sunday. Pro-NHI T-shirts were handed out over the weekend by ANC members.

For someone like Sisanda Kulima, a community health worker from Finetown in Ennerdale, the NHI plans have not yet covered the basic grounds to ensure successful implementation.

“Our clinic was burnt down in service delivery riots in 2014 so we don’t have a proper place to meet. Sometimes they don’t have the medication for us or even gloves, and when we go to our clients we go empty-handed.

“We try to focus on education and awareness with our clients, but it’s not practical when our clients need their medication. I have to spend R19 from my stipend to travel to Lenasia to get their medicines and I can’t afford that,” she told Spotlight after presenting her comments to the committee.

Kulima said CHWs still only receive a R3,500 monthly stipend and they don’t feature in the bill at all, which she has downloaded on her phone and scrolls through to make her point.

“We are not safe as CHWs because we don’t know if they will just exclude us. They have come here with their big plans, but they treat us small. When this committee leaves here they will say they heard us then they will just do what they want and leave us where we’ve always been,” she said.

In Kagiso, 76-year-old Thanduxolo Mdiya told Spotlight after making his comments to the hearing:

“I’m happy that people will get what they need, whether you are rich or poor, but they didn’t come out clearly to say how much we will pay on the NHI and I don’t hear their plans of one, two and three of how they will improve services. I’m worried because the services are so poor at my clinic, Fanyana Nhlapo Clinic, where the queues are always long.”

What keeps Thabo Mafatshe from Krugersdorp up at night is that if there is an emergency and he calls an ambulance it may not arrive even hours later, he told Spotlight.

“People go to hospital to die. Why don’t we first improve the state of our clinics and hospitals? We don’t have enough 24-hour clinics and professional nurses and doctors.

“I’m leaving this hearing and I can say the bill is still not clear to me and I know that they will tax us for this thing.”

Bheki Manikivane, a Soweto resident, used his allocated time to slam the ANC “for failing the people” and “not being honest that we have a crisis in government”. He said infrastructure in the apartheid era was better than it is now.

Speaking to Spotlight afterwards, he said pushing ahead with the NHI ignores pressing needs such as fixing the infrastructure of hospitals and clinics, retaining professional staff and addressing load shedding, corruption and high unemployment.

However, his friend Gordon Makae of Randpark Ridge, told Spotlight he has received excellent service at Helen Joseph Hospital, Charlotte Maxeke Hospital and at his clinic in Weltevreden Park.

“NHI will be good because it will stabilise this whole thing of quality healthcare for everyone. I can say that I have received only the best care in the public service,” Makae said.

Mfundisi put his comments to the committee and said to Spotlight afterwards: “These delays have come because the government has kowtowed to the private sector, put profits before people and made side deals.”

He said the urgency to get NHI up and running needs to run parallel with a committed programme to fix problems in the healthcare system, but “this revolutionary programme cannot be stalled any longer”.

Anele Yawa, general secretary of the TAC, was present in Soweto on Sunday. Yawa used his minutes at the microphone to ask the parliamentarians on the stage which of them use public health facilities – there was no response.

Yawa said the TAC supports the NHI but there are deep concerns over the NHI purse, and the powers held by the health minister, who will appoint members to the NHI committees.

“We must ask ourselves how we will protect public money from being looted. The minister cannot be player and referee.”

Yawa said civil society, labour and public health users have to be part of these committees and he also called for HIV/AIDS funding to be ring-fenced within the NHI.

The chairman of the Portfolio Committee on Health, Sibongiseni Dhlomo, spoke to Spotlight as the last of the public hearings into the NHI hearings wrapped up in Gauteng this weekend.

Dhlomo said he has over the weeks listened to “the voices of hundreds of our people across the country raising their issues” and that he’s “learnt a lot from what people have said and how they have said it”.

“This has been a lawmaking process that has got the collective response of South Africans.”

He acknowledged that the NHI Bill is “not the perfect product, but we cannot dilly-dally; we are way behind as a country on universal health care”.

He said informing people about the bill is not the role of the committee, but rather of the provincial health departments, which should have held workshops and awareness building initiatives.

“This will not happen that you will wake up one day and there will be NHI. Implementation will be staggered, but by 2026 you will start seeing things happen,” he said.

MP and Health Portfolio Committee member Haseena Ismail is an Ekurhuleni local. Representing the DA, which is the official opposition in Gauteng, Ismael said the hearings did not hit the mark in providing adequate information or answering people’s questions.

“People have come here to say they support universal health coverage and the NHI, but… and it’s the ‘but’ that matters, because we still haven’t clarified issues for our people,” Ismael said, speaking to Spotlight at the Soweto hearings.

She said in Gauteng the pressing health care issues revolve around poor infrastructure and equipment in the public health service, overflow of catchment areas with high migrant populations and poor patient record-keeping that “means more people are falling through the cracks”.

“We believe in universal health coverage but not the NHI in its current form. There is a history of state-owned enterprises failing because of corruption and we cannot have the NHI become something of another SOE that means we have universal healthcare that takes away from the purse of South Africans.” DM/MC