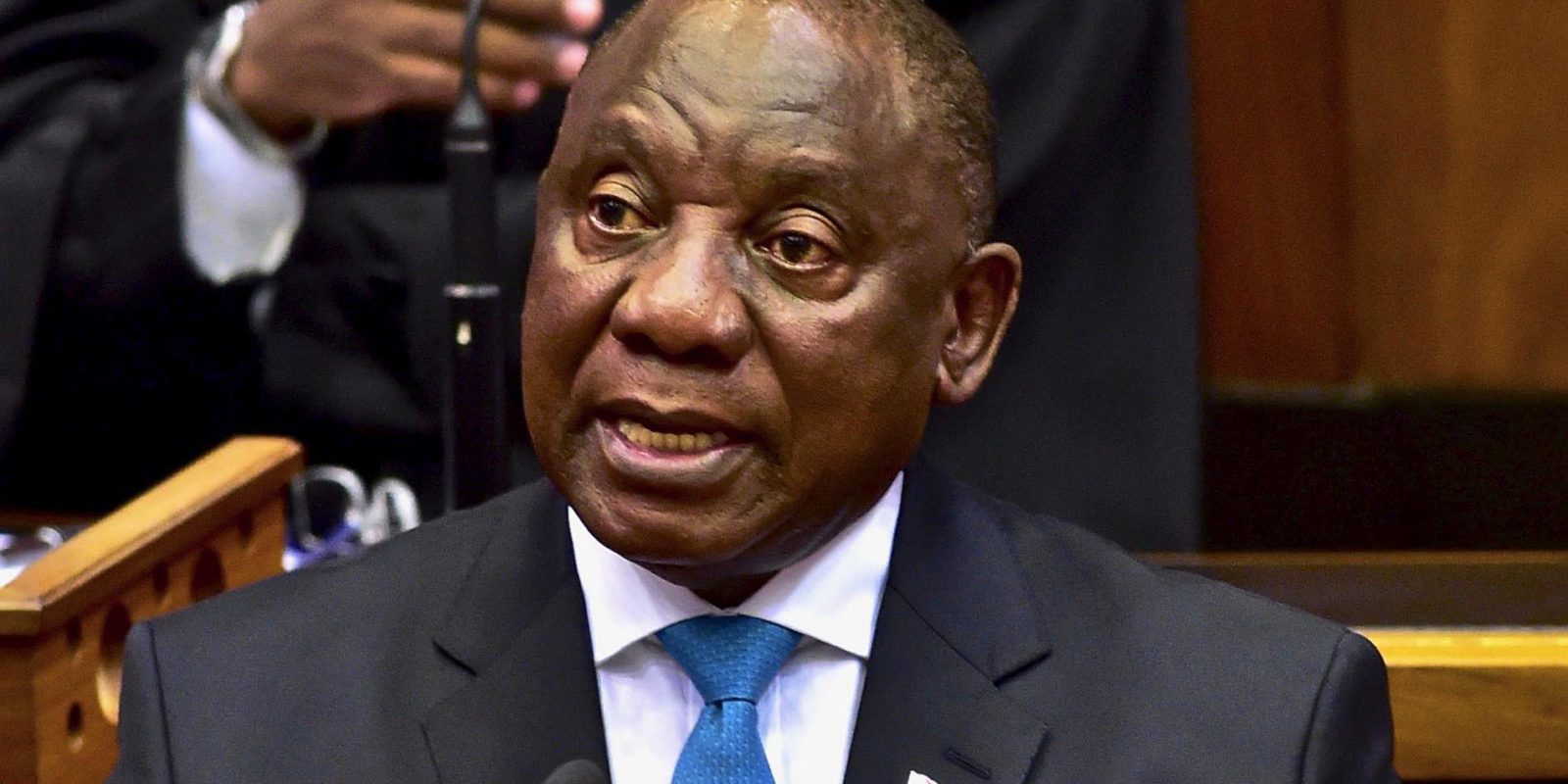 President Cyril Ramaphosa replies to the Debate on the State of the Nation Address in Parliament in Cape Town. The President delivered the State of the Nation Address on 13 February 2020 to a Joint Sitting of Parliament, where he outlined the action plan towards placing the economy on a path of recovery and building the capability of the state. 20 February 2020. (Photo: Elmond Jiyane, GCIS)

In a business-like reply to a bruising parliamentary SONA2020 debate, President Cyril Ramaphosa re-emphasised no land grabs would be allowed, Eskom would be restored financially and operationally — and the National Health Insurance was central to a healthy South Africa.

Over some 50 minutes on Thursday, President Cyril Ramaphosa traversed, again, his administration’s agenda of hope and action, and the progress despite challenges. His targeted optics were those of a statesman, rising above what had been a deeply divisive and often callous debate in Parliament on the State of the Nation Address (SONA) he had delivered a week earlier.

“(The debate) has at times also demonstrated the divisions that exist across our land and body politic. No matter how fiercely we debate… we remain united in our desire for a better future for all the people of our country. And this I find heartwarming.”

Recital of the Constitution’s preamble that recognises past injustices and future aspirations, became the platform for dismissing insinuations that the ANC was tolerant of apartheid, or any such sentiments after the EFF made much of the presence of former deputy president and apartheid’s last president, FW de Klerk, in the public gallery during SONA2020.

“Apartheid was inherently a crime against humanity…  It was so immoral in its conception and so devastating in its execution that there is no South African living today who is not touched by its legacy…” said Ramaphosa, going off his prepared script to add: “I would go so far as to say to deny this is treasonous.”

Next, he addressed gender-based violence (GBV) and the need to fight this crisis, rather than weaponising it for cheap political point-scoring.

A public outcry erupted over the ANC deploying wife-beating gossip in Parliament on Tuesday against EFF leader Julius Malema, who turned the tables to let rip with domestic abuse claims against Ramaphosa.

“We cannot reflect on this debate without acknowledging the shameful exchanges that took place in this House on the first day of the debate – exchanges which served to politicise and trivialise the national crisis of gender-based violence,” said Ramaphosa.

“At a time when we are called upon as a nation to intensify and deepen the struggle to end all forms of violence perpetrated by men against women, the statements made – and the purposes they were intended to serve – were disgraceful.”

The president seemed to chastise his ANC parliamentary caucus:

“We owe the people of South Africa an apology for what happened in this debate.”

His comments came a day after the ANC at Luthuli House said in a statement it was “disappointed” by the “unfortunate use” of gender-based violence, saying “The ANC henceforth expects all its public representatives to refrain from scenes that fuel perception of using gender-based violence for publicity- and attention-seeking stunts.”

While many speakers criticised using GBV as a political weapon, on Wednesday only National Council of Provinces Deputy Chairperson Sylvia Lucas had been forthright in expressing regret, saying: “We must apologise.”

On Thursday, Ramaphosa went off-script to deal with this abuse of South Africa’s grimly real crisis of gender-based violence that saw the murder of 2,771 women between April 2018 and March 2019, according to official SAPS statistics.

Just some 12 hours earlier a parolee who had skipped supervision pointed out a drain outside Worcester, leading to the discovery of the body of eight-year-old Tazne van Wyk some two weeks after she disappeared from her Ravensmead, Cape Town, home.

“You have raised the issue of my late former wife, Nomazizi. She is not here to respond for herself”. He reminded Malema of how in 2017, when these rumours first surfaced ahead of the ANC Nasrec conference, his first wife Hope Ramaphosa publicly said such claims were untrue.

But then Ramaphosa went a step further, apologising to Malema’s wife Mantwa Malema for having been targeted.

When that accusation was made from the ANC benches – the president publicly acknowledged it was his parliamentary benches that started it – Ramaphosa said that “I felt for Mantwa (Malema)”.

“My heart goes out to Mantwa and your family, Honourable Malema. It was uncalled for. It was improper. It was not correct for it to be raised. If I can offer an apology to you about this…”

When Malema afterwards wanted to speak, he was unable to go beyond outlining several occasions his wife was insulted. Presiding officer, National Council of Provinces Chairperson Amos “Bra Ambi” Masondo, closed the sitting as the ANC benches that earlier had applauded their president, fired off various points of order to stop Malema from speaking.

And so it was another moment missed at the hand of the ANC. As it turned out, Malema was about to apologise to Ramaphosa in person in the House.

Instead, it was done over the phone – later. “I hope the president can accept my apology, together with his family, which I offer sincerely,” said Malema in a subsequent statement.

“I accept that I should have known better not to indulge myself in the same degeneration that the ANC caucus visited upon my person and that of my wife. It was therefore in a desperate act of personal defence, which I now regret because of how critical the matter of gender-based violence is for us all as a country.”

Dealing with apartheid denialism and the weaponisation of violence against women for political point-scoring were central issues that had to be dealt with, particularly with Ramaphosa’s wish to appear statesmanlike. Most of his 50-minute reply was on how his key reassurances had to be made, again, to a range of sectors – from investors, farmers and trade unions to the majority of South African citizens who in one of the world’s most unequal societies are poor, vulnerable and unemployed.

Ramaphosa talked up his administration – and its pursuit of inclusive growth to transform South Africa.

On the GBV priority, every police station now had rape evidence collection kits, 200 social workers had been appointed and five more sites are identified for further one-stop Thuthuzela care centres for survivors of sexual and gender violence. More than 3,600 dockets on sexual offences have been reviewed “and most of these have been reopened for further investigation”.

On Eskom, steps are underway to execute the road map to restore the power utility to full operation and financial health, while placing “our entire energy sector on a new trajectory of sustainability”.

On land reform, a constitutional amendment is supported to change the patterns of land ownership.

“The lack of land is – alongside the lack of skills – one of the greatest impediments to growth and prosperity,” said Ramaphosa, but he went off script to add:

“Land grabs will not be allowed to happen in our country.”

On the National Health Insurance (NHI) to grant access to quality healthcare for all South Africans, Ramaphosa said:

“We are clear that the pace and the scale at which we implement the NHI will be determined by the means at our disposal.

“For every South African to receive an equal standard of quality health care is good for social cohesion, for all of us, and, ultimately, with a healthier population, good for our economy”.

But it never quite was an unqualified statement — more along the lines of the well-trodden governing ANC motto “more needs to be done”.

“While Eskom and Transnet have between them recovered more than R2.3-billion in monies lost to corruption, we know that this is just a fraction of what has been lost to State Capture. We are determined that all these funds must be found and must be returned, no matter where in the world we need to go to find them.”

On the district development model that brings all three spheres together  — a “one country, one plan” approach already announced in 2019, but will only next week see the first meeting of all 44 district councils and eight metros:

“Our role is not merely to observe, but to mobilise all the capacity of the state, of business and communities to fix people’s problems.”

Calling for the restoration of trust and co-operation, not only in Parliament after a divisive SONA2020 debate, but broadly across society, Ramaphosa again touted social compacting to overcome challenges.

“Despite the grave challenges we face, we are making progress. We are not hiding from our problems. We are acknowledging them, we are confronting them and, in so doing, we are establishing a firm foundation for growth.”

But the time for just acknowledging shortcomings seems to be over. And while Ramaphosa did promise implementation on Thursday, action — above board, corruption- and nepotism-free — is now sorely needed. DM