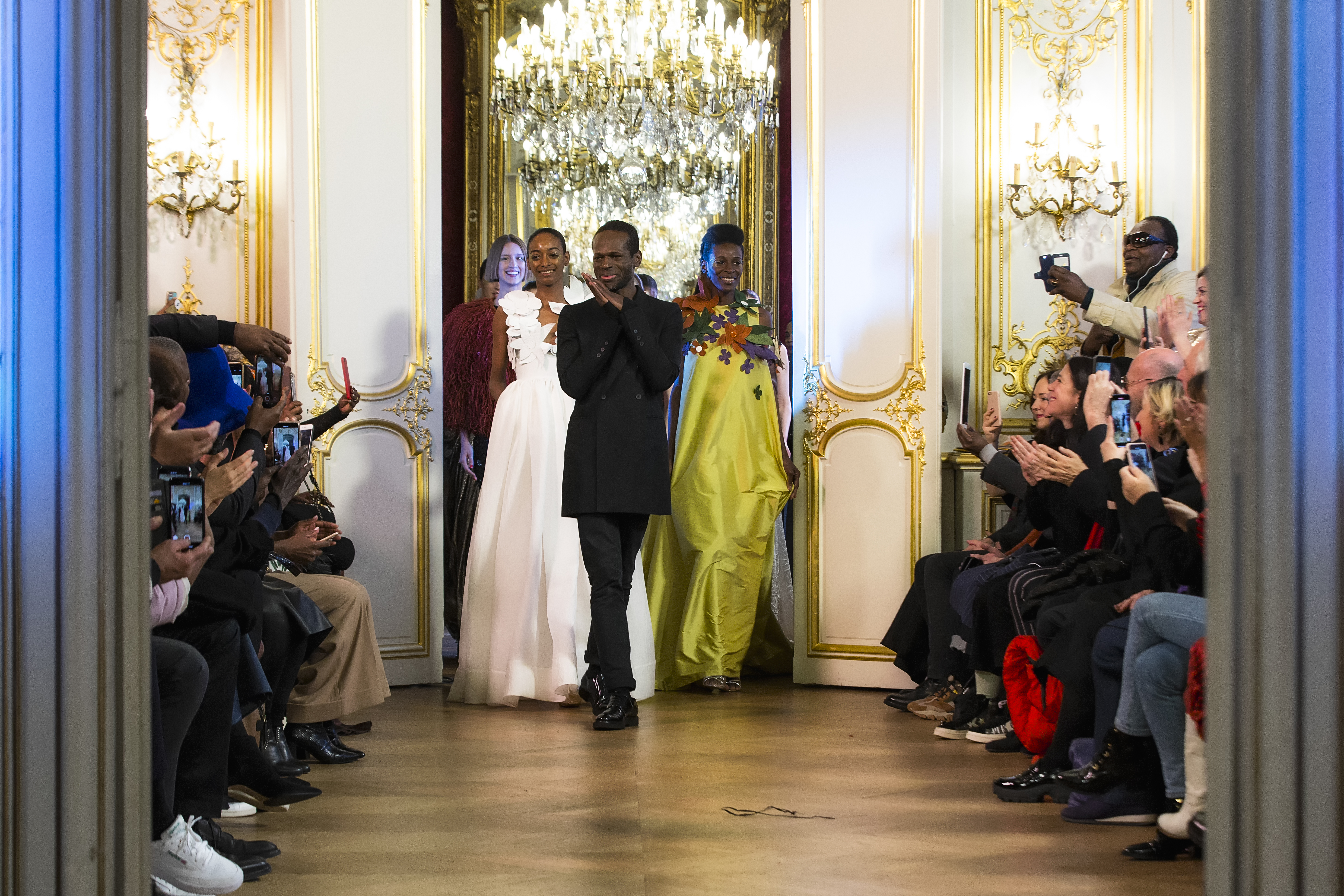 Having stepped back from the world of ballet, Imane Ayissi is now creating collections dipped in African history. He recently showed in Paris, during the official haute-couture calendar.

“I am as moved as I am proud. Happy, of course, that my work is recognised, but also touched that the African textile heritage, which runs through my creations, is thus celebrated. As if something was finally lining up and a new chapter in fashion was opening. Africa, so often fantasized, will finally be able to express itself, in an authentic way and in all that is noble and luxurious, in the eyes of all,” said Imane Ayissi following his Spring/Summer 2020 haute couture collection that showed at Paris couture week in January 2020.

Ayissi, the first designer from Sub-Saharan Africa to be a guest on the official couture calendar – he is following Moroccan designer Noureddine Amir, who presented at couture fashion week in 2018 – was evidently moved. This was a historic moment: only 41 designers are members of the couture calendar, split between three categories – members, correspondent members and guest members – and the requirements to get the couture label are stringent.

“Only those houses and companies that are approved each year by a dedicated commission run by the Chambre Syndicale de la Couture and held under the aegis of the Ministry for Industry may become eligible for [the couture designation].

“Its primary field of interest being handmade work accomplished within these Houses’ workshops, a laboratory for ideas and techniques, a space where creativity can flourish freely: this is Haute Couture, whose international renown has always remained true to itself and has contributed to making Paris fashion capital of the world,” says the Fédération de la Haute Couture et de la Mode.

It took the 51-year-old designer five couture collections presented off the official calendar, all intertwined with his African roots, and the support of Francesca Bellettini of the House of Saint Laurent, to make the cut. “A lot of different things [inspire me]: it can be a picture, a piece of fabrics, a story, or a word. But all the time related with an African story.”

Born in Yaoundé, Cameroon, Ayissi has vivid images of his childhood. “It was very colourful, very noisy, plenty of kid games, but only with toys made by us. A lot of freedom and in the same time an education with very strict rules. A big city, for me at that time, to explore. A lot of sisters and brothers, plenty of aunts, uncles, cousins … And a very elegant mother with a unique personality who was fascinating me …”

In fact, his mother, Julienne Honorine Eyenga Ayissi, was the first “Miss Cameroon”, following the country’s independence in 1960; she was only 16-years old. Later, she joined Air Afrique, then Cameroon Airlines as an air hostess, bringing back ensembles and dresses from her trips around the world.

“I was [interested in fashion] since I was a child, maybe influenced by my mother and the elegant dresses she used to bring back from Paris. She used to be an air hostess, so had many opportunities to travel and to do shopping in Europe. I was really a little kid when I started to imagine silhouettes and to sketch them in the dust with wood sticks.”

His mother married the late Jean-Baptiste Ayissi Ntsama, the first boxer to win a gold medal at the African Games organised in 1965 in Brazzaville, Congo, with whom she had nine children.

Everyone in the family was required to try boxing, but Ayissi soon turned to dancing instead.

“I started to dance in the ‘family ballet’ with my brothers and sisters when I was nine years old. We had the opportunity to dance, during concerts, for singers who were very famous in Cameroon at that time. Especially in the Cinema-Theater Abbia and the Cinema Le Capitol in Yaoundé. [It was] incredible experiences for a little child,” he says.

What began as a childhood passe-temps (a pastime), led him, at 18, to the National Ballet of Cameroon. “It was quite intense, a lot of choreographies to learn all the time, different traditional dances from every part of Cameroon to learn, so a lot of work and a very physical job. But it also allowed me to travel to different European countries, Italy, France … And to discover the European way of life,” he adds.

The young dancer also worked as a stylist and a designer for a local brand, Blaz Design, in Cameroon and later, relocated to Paris, where he worked for the likes of Givenchy, Saint-Laurent, and Dior as a model. In both dancing and styling, Ayissi found expression in movements and the infinite poetry of the body. As a model, he learned about proportions, constructions and how a garment can tell a story.

“I never had the opportunity to study fashion in a fashion school. I learnt a lot when I was a model because I used to work also as a fitting model in studios of big luxury brands. It allowed me to discover the collection process, the construction of garments, the notions of quality and real luxury. And then I learnt by collaborating and working with technicians, pattern makers, embroiderers for my first collections,” he says.

In 1992, he created his first collection, made of about 100 silhouettes, “mostly dresses, almost all in the same fabrics. Maybe two out of these 100 dresses were correctly made … But the most important thing for me was to prove that I was able to do it.”

Back then, everything was a challenge: finding fabrics, pattern-making, finding a venue to show, or working on the guest list. Today, Ayissi finds it a lot easier, calling himself a “professional” designer, although he notes that he is also more demanding today than he was back when he started, adding on new concerns every time he works on a new collection.

From his studio in the Faubourg St Denis in Paris’ 10th quarter, he can feel the hubbub of the French capital, a city he loves for its international mix, its architecture and its cultural life. “And, of course, the fact that it is really the capital of fashion!” he adds.

For his Spring/Summer 2020 haute couture collection, Ayissi used the same fabrics he has been devoted to in earlier collections, all rooted in the continent’s rich textile tradition.

The result is Akouma – which means “wealth” in the Ewondo language of Cameroon – an apotheosis of elegance, perfect tailoring, intricate detailing and savoir-faire.

A tailored under-the-knee dress in a geometric pattern, with oversized shoulder pads that prolong the straight collar like a pair of wings, straight coats in beige or dark blue or bright fuchsia worn over an ostrich feather skirt, flower embellishments (created in 3D), coral silk pants floating like it was the Seventies, a bustier black dress with bold fish patterns like patches of bright colours, more ostrich feathers, wrapping the body like a dancing and swaying armour.

“Since it was my first collection in the official haute-couture calendar, I wanted to reflect on the notion of luxury and on the notion of wealth; how to express wealth through garments in different civilisations, but also what we can consider as really wealthy. A very humble fabric can be considered as precious because of its story, the amount of work needed to produce it and much more,” he says.

Angela Bassett and Zendaya are among the many celebrities already wearing Ayissi on the red carpet.

The late Yves Saint Laurent once said: “Haute-couture consists of secrets whispered from generation to generation.” Ayissi whispers African secrets stitched here in a pleat, there in an embroidery, for generation and generation to come. In his creations, we’re all dancing. ML