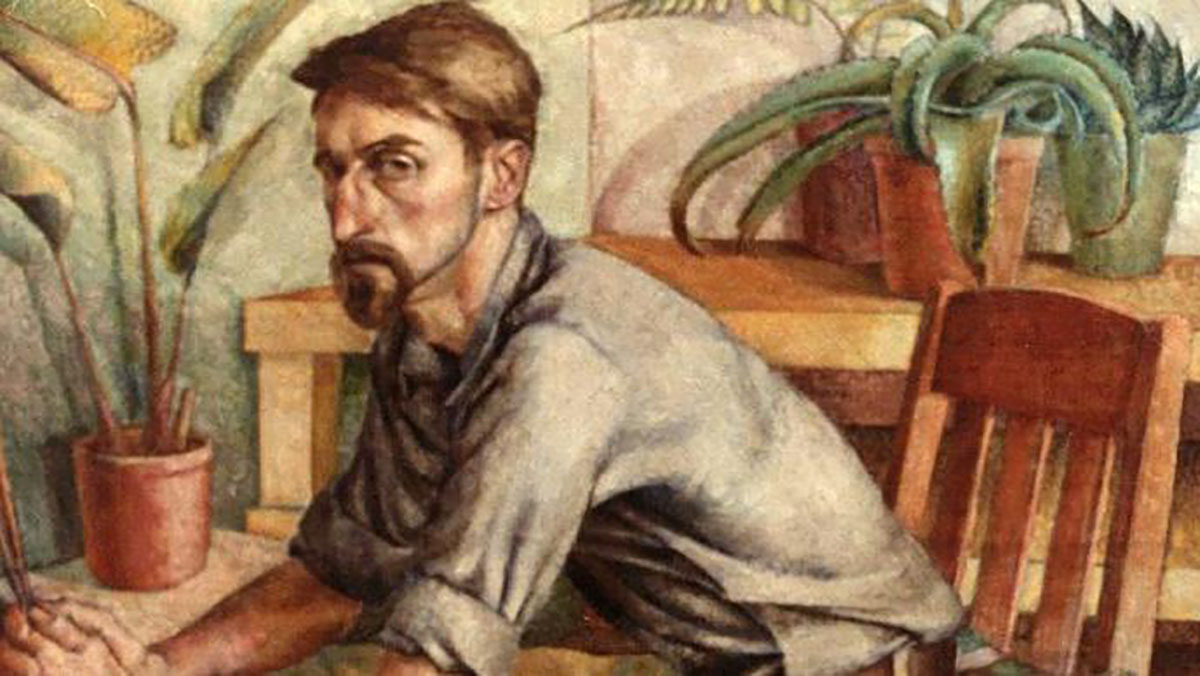 How does anyone do justice to a person like Jock Strachan, his life packed with such contrasts? He attained no artist’s celebrity, his career as a painter was worn down by life. But he never compromised by descending to propaganda or to kitsch.

Jock Strachan – who died this month aged 94 – prevented a probable second massacre of black demonstrators outside Central Prison in Durban by deliberately standing with his young wife Maggie between them and white apartheid police pointing Sten guns, only days after the massacre at Sharpeville 60 years ago.

The police had already shot dead a “guileless, slightly built bloke with a bag full of Granny Smith apples”, left lying in the road.

The demonstrators were workers demanding the release of their leaders, locked up without trial in the prison.

The police captain “draws up his men in single rank… ‘Will all those white people up there go away’, he said, ‘There’s going to be shooting here. I give everybody else two minutes to disperse.’ He orders his men to cock their weapons,” Jock wrote in his book, Make a Skyf, Man!, published by Jacana in 2004.

“Don’t say a single word to anybody, I say, or somebody’s going to say we’re giving orders, and we walk up and stand in front of the demo. If the presence of whites will inhibit things maybe we can prevent another Sharpeville. Fold your arms in front of you, I say, and don’t look around.

“A nut political figure called Anthony de Crespigny comes and stands next to us and folds his arms. An Indian attorney called Bhagwandeen joins us. We stare at the wall and the captain stares at his watch.”

Slowly the crowd drifted away, and Maggie and Jock scooted off to Swaziland, returning to Port Elizabeth after conditions had quietened down.

Robert Harold Lundie “Jock” Strachan was born in Pretoria on 1 December 1925, died in Durban on 7 February from complications of liver disease, and was cremated with no ceremony even before his death was reported. As he wished.

The Times in London last week described him as “one of the most remarkable figures in recent South African history: a bomber and fighter pilot, art teacher, painter, explosives expert and guerrilla, fisherman, picture restorer, cartoonist, novelist, humourist and ultra-marathon runner”.

Perhaps best remembered, the Times said, for his “dramatic exposé of the appalling jail conditions” of black criminal prisoners, Strachan was sent back to prison for a second jail term following his release from three years in prison as one of the first convicted founding members of Umkhonto we Sizwe (MK). It was punishment for revealing the truth.

He was my art teacher at school for four years and I his fellow prisoner during part of each of his sentences, but how does anyone do justice to such a person, his life packed with such contrasts?

His pen and ink illustrations for his fellow prisoner Hugh Lewin’s Bandiet out of Jail (Random House, Parktown, 2002) develop a form of art unparalleled by anyone else as the first, authentic, first-hand, visual evocation of the brutal underside of South African political experience. He painted that “guileless, slightly built bloke” lying dead in the road, with his apples all around him, but with rigorous self-confinement to what he knew for himself from a white prisoner’s experience, Jock’s drawings in Hugh’s book add to the immortal expression of South Africa’s labour system in Gerard Sekoto’s painting Song of the Pick, from 1947.

He attained no artist’s celebrity of the kind of a William Kentridge. His career as a painter was worn down by life. To his immense credit as a white South African artist – suffering his socially determined fate as a white artist of exclusion from the lives of more than 80% of the people – he never compromised by descending to propaganda or to kitsch. His art was what he himself knew. As an outsider to more than 80% of the nation, his art is an insider’s art.

Harold, who with his fellow artist and former student Maggie chose to stare down the guns of the police, left a far smaller body of work than could be expected from anyone with his own strongly grounded training as an artist. Following a Fine Art degree from Natal University College in Pietermaritzburg (1946-49), he won a scholarship in 1950 to study at Camberwell School of Art in London, with a course the next year in painting restoration at the State Academy of Fine Arts in Stuttgart in then West Germany. It was as a framer and picture restorer that he later earned his living as a banned politico in Durban after his release from his second term in prison – tending other artists’ work, not his own.

It was South Africa’s true appreciation of the artist. Right up today, Harold is far better known for his humorous column in Noseweek – which continued over many years until September last year, when he was 93 – than for his paintings and drawings. A proper, national exhibition is overdue.

What was remarkable about Jock’s form of writing, especially in his second autobiography, Make a Skyf, Man!, is his way of revealing bitter truth under a strange cover of fictitious names, in semi-novelistic form, with the slang of working-class white South African English-speakers. Zoë Molver, of the Department of Media and Cultural Studies at the University of KwaZulu-Natal in Durban, has written about him as a “wryly ironic narrator”.

He was not solely wry and ironic. Nowhere is his prose more powerful or more horrifying than when he evokes one of the most hideous experiences in English writing about the sexy Sixties: the shouting contact he makes when in apartheid South Africa’s hanging jail, Central Prison in Pretoria, with his former Umkhonto we Sizwe comrade, here described as Max, in the death cells, on his way to execution.

“The condemned prisoners are singing (as my political prison comrades and I heard their successors a few years later) incessantly, unceasingly, non-stop, through day and night.

“Over the way I hear the beamptes [officials] bursting into the Condemned Cell yelling ‘Get down kaffir!’ and the sounds of bodies thumping about… the Time has come. The singing stops, I suppose from momentary shock, and Max gives a full-throated cry of existential animal pain, horror, from the floor of the Death Cell he shouts it for the whole world to hear, GOODBYE, GOODBYE, I’M BRAVE, I’M BRAVE, GOODBYE!, and somebody grabs him and he’s away …”

Few others can have written like this, from life. “Max” is believed to be a conflation between Joseph Jack – with whom Strachan began experiments in bomb-making, and was later put together on trial with Jock and Govan Mbeki – and the trade union leader Vuyisile Mini, hanged with two MK comrades on 6 November 1964. Ben Turok, who was serving a three-year sentence in Central Prison for MK activities along with Harold at the same time, recalled that “the voice of Vuyisile Mini came roaring down the hushed passages. Evidently standing on a stool, with his face reaching up to a barred vent in his cell, his unmistakable bass voice was enunciating his final message in Xhosa to the world he was leaving”.

And who else, as the pivotal figure in War of Words: Memoir of a South African Journalist – by the intrepid South African journalist, Benjamin Pogrund, dedicated to his colleagues on the Rand Daily Mail, and not least its noble and illustrious editor, Laurence Gandar – spoke truth to power about prison conditions after his release as bravely as Jock did, with the same courage that he and Maggie had faced the Sten guns?

He took no nonsense either from the power masters of the South African Communist Party such as Joe Slovo, and voted for the Democratic Party in the pivotal, transitional general election of 1994.

Strachan was married to his first wife, Jean Middleton, between 1950 and 1958. Jean later served a three-year sentence in Barberton women’s prison for membership of the SACP (1965-68), and wrote a memoir, Convictions: A Woman Political Prisoner Remembers (1998). He married Maggie von Lier, his former student, in 1959, and though the marriage did not continue, Maggie – a fine artist who has exhibited in a gallery in London – continued to support him “over the decades when he was unable to work”, as Wikipedia reports. They have two children, Susie and Joe.

Strachan’s Wikipedia entry notes that he was “unusual among white activists in that he did not go into exile following his release but stayed on in South Africa”. His obituary in the Times stated that he was “usually near-penniless, was endlessly generous and gave away much of what he had”.

As Charles van Onselen has written, Jock Strachan was “a hero – committed to all things good, principled and intellectually independent”. Strachan reminds him “that South Africa is capable of producing heroes”.

Born in Johannesburg in 1941, Paul Trewhela worked in underground journalism with Ruth First and edited the underground journal of MK, Freedom Fighter, during the Rivonia Trial. He was a political prisoner in Pretoria and the Johannesburg Fort as a member of the Communist Party in 1964-1967, separating from the SACP while in prison. In exile in Britain, he was co-editor with the late Baruch Hirson of Searchlight South Africa, banned in South Africa.