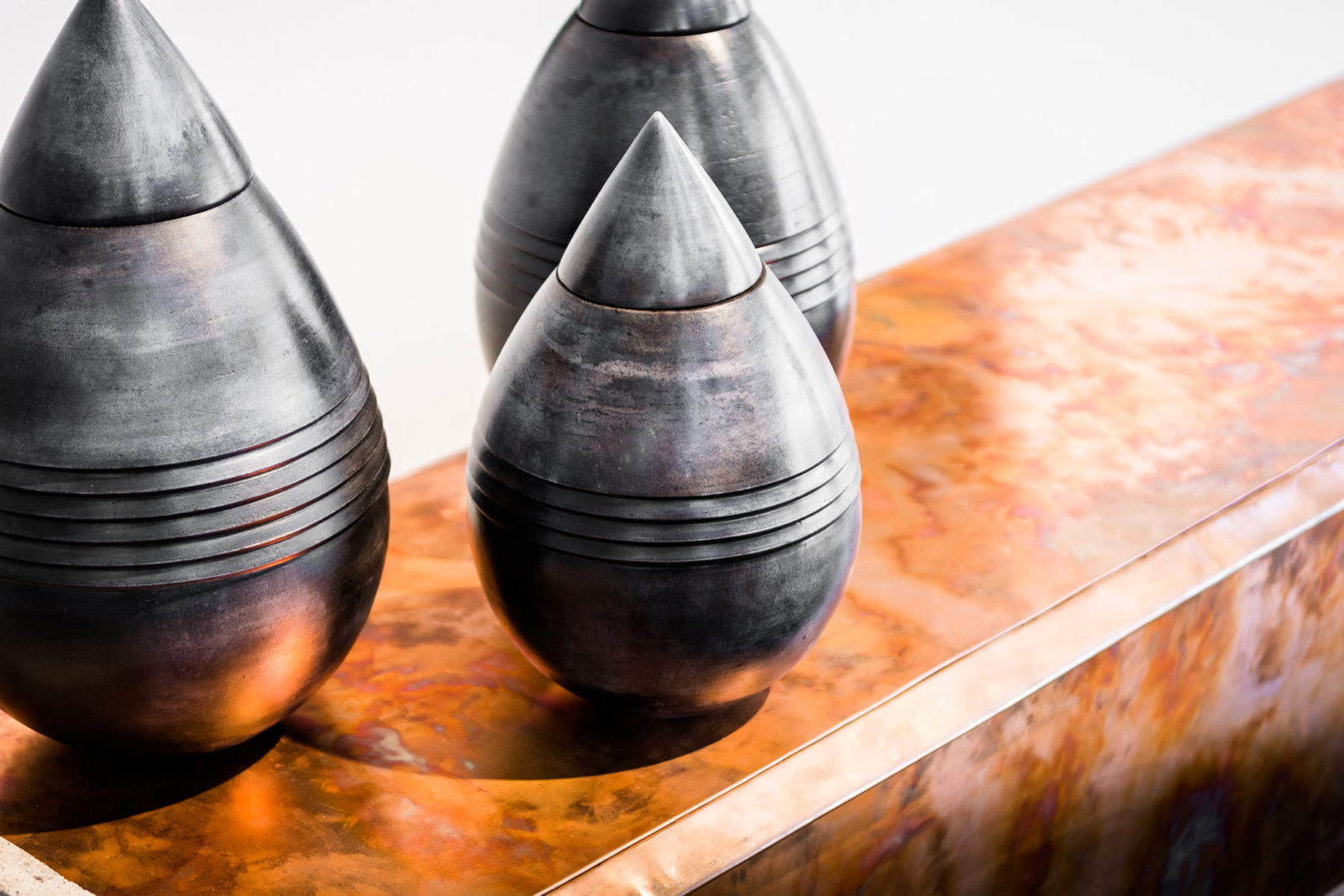 As global interest in ceramic art continues to rise and influential contemporary art collectors, galleries and museums add clay to their collections, South African artists are pushing the boundaries of the medium and defining a contemporary South African aesthetic with universal appeal.

Beyond the decorative and the functional, pottery, one of the oldest human inventions, has long been viewed as a way to gain insight into the various societies that having been creating pots around the world over millennia.

Although archaeologists continue to research the origin of pottery in various countries around the globe, it is also thought that much of the region-specific pottery practice developed independently. Recent research – published in 2009 – by Geneva University archaeologist Eric Huysecom and his international research team has revealed that the oldest piece of African pottery that has been discovered to date was found in Mali, and dates back to 9400 BC.

So familiar are clay pots these days, that you’d be hard-pressed to find a South African who has never come across some type of clay pot, be it traditional Zulu beer pots, or Sotho pots that were traded with the Ndebele people who would decorate them in graphic motifs. In fact, pottery became so ubiquitous around the world that for a while, with the exception of rare old pieces, ceramic art, be it clay pottery or other forms of ceramics, was not rated very highly in the oft-rarefied world of contemporary high art.

However, ceramic artists have kept at it. As public interest in art collection became more prevalent in the 20th century, becoming more accessible to members of society beyond aristocrats and the super-wealthy, ceramic artists continued to innovate.

But it wasn’t until the noughties that contemporary ceramic art started to truly capture the interest of the collectibles market. That is not to say there were no collectors of contemporary studio ceramics prior to that. In South Africa, artists such as Nesta Nala, Louise Gelderblom and Ardmore founder Fée Halsted are more than proof of that.

In 1990, Halsted was awarded the prestigious Standard Bank Young Artist award together with collaborator Bonakele Ntshalintshali. Gelderblom, on the other hand, became a household name for her ceramics work, which she started in the 1990s. The late Nala is considered a national treasure – in 1994, her work was chosen to represent South Africa at the Cairo International Biennale for ceramics. In 1995, she won the FNB Vita Craft Competition and in 1996, she won first prize at the South African National Ceramics Biennale, and her work is represented in major public and private collections locally and abroad.

In Vitamin C: Clay and Ceramic in Contemporary Art, a compendium published by Phaidon and put together by their editors in collaboration with British art historian and art curator Clare Lilley, 84 critics and curators nominated 102 contemporary artists who “consider clay as core to their work or as a vital strand within a wider, multi-disciplinary practice”. The book encompasses pottery as well as broader use of ceramics in art, including sculpture.

In her introduction, Lilley points out key moments in the global change of perception towards ceramics, towards its elevation to high-art status, which she credits to “the context in which such work has been exhibited since the turn of the millennium”.

In the UK for example, she highlights 2004, the year celebrated potter Grayson Perry won the Turner Prize. A year later, the Tate Liverpool presented an exhibition titled A Secret History of Clay: From Gauguin to Gormley. In the US in 2009, the University of Philadelphia presented Dirt on Delight: Impulses that Form Clay – an exhibition “of 22 artists from across four generations for whom clay was at the core of their practice”. Then in Dallas in 2016, the Nasher Sculpture Centre presented Return to Earth: Ceramic Sculpture of Fontana, Melotti, Miró, Noguchi, and Picasso 1943–1963, and so on it went, as more galleries and art fairs around the world featured ceramics and signed up ceramic artists.

One might ask why the particular validation of ceramics as art must come from institutions in the Northern hemisphere, when pottery has been such a huge and constant part of the Southern African creative expression, be it older African pottery, or the development of commerce-focused production pottery studios that came with the arrival of the 17th century colonists, or indeed the body of contemporary studio ceramics that have been celebrated and validated in South Africa for decades already.

As South African gallerists and curators have told Maverick Life in numerous interviews, the reality of the moment is that the kind of art collecting classes whose patronage makes a marked difference in the value of an artist’s work do reside in the richer Northern hemisphere countries and the world’s most influential art institutions are also based there. Therefore, the value and desirability of much of contemporary art is largely influenced by their appetites.

“There have been great teachers over the decades, certainly in the last 50 years that have really helped to shape the practice, there have been strong departments and university courses. It’s a very robust and exciting and dynamic medium in South Africa,” says Southern Guild gallery co-founder Trevyn McGowan.

Indeed, locally the noughties saw the rise of artists such as Dyalvane who co-founded Imiso Ceramics in 2006. Since then, his work has aroused a constant stream of interest. And with the increase in global interest in contemporary ceramic art, Dyalvane’s work and influence has grown far beyond our borders.

Dyalvane’s latest exhibition, which opened on 18 January 2020 at Southern Guild is made up of work he created while on residency at the Leach Pottery studios in the UK. Founded in 1920 and restored in 2008, the famous studio is widely regarded as having played a central in the development of British pottery in the 20th century.

“Obviously in my opinion – and in a lot of other people’s opinion – Andile [Dyalvane] is one of the top ceramists in the world; he belongs to the most important institutes; he’s represented by one of the top art and design galleries in the world in New York alongside us,” says McGowan. The American gallery she refers to is Friedman Benda, which is considered one of the most influential galleries for design. “His pots have sold for $50,000,” she adds.

Dyalvane has consistently pushed boundaries in his practice; his style of work has consistently managed to strike a delicate balance between tradition, storytelling and a progressive approach to technique. His latest body of work, which he produced during his 2019 residency at Leach Pottery studios, is proof of such impeccable skills.

Southern Guild also represents another Imiso Ceramics co-founder, Zizipho Poswa, whose work McGowan tells us has been collected by the likes of influential art collector and patron Valeria Napoleone, as well as the Los Angeles County Museum of Art (LACMA): “Zizi’s pieces are selling as they come out of the kiln, there is no work available by her at the moment. There’s a waiting list of collectors.”

While Poswa and Dyalvane’s stars shine brighter than most in the world of ceramics, there is still a long list of brilliant South African studio ceramists to be excited about and to start collecting.

Here, McGowan shares a few of her favourites.

“Definitely Madoda Fani. His technique is unique; it’s very strongly identifiable and he is experiencing enormous success at the moment, and really top collectors are buying his work. Chuma Maweni is definitely another one. He came through the studio model of assisting other potters, and now he has just gone into his own studio,” says McGowan.

Maweni’s black ceramic pieces captured the judges’ attention the 2019 edition of 100% Design South Africa, where he received a special mention during the award ceremony. Prior to that, he also received merit awards at the Ceramic SA Western Cape Regional Exhibition and the Corobrik National Ceramics Biennale in 2017 and 2018 respectively.

“Another guy that I think is a real future star is Sandile Cele. I just think he’s got a real strong identity, his work is super exciting. And as someone who’s not as established as some of the other names, his work is not as expensive. Then there’s Clementina, Astrid Dahl, Shirley Fintz, all of these names, there are literally so many people who are strong and unique. So it’s a very exciting category. There are also a number of different places that you can buy from and really you should buy what is appealing to you, and as your collection grows, you’ll start to see themes develop, or maybe an eclectic mix, but follow your heart to begin with,” says McGowan. ML