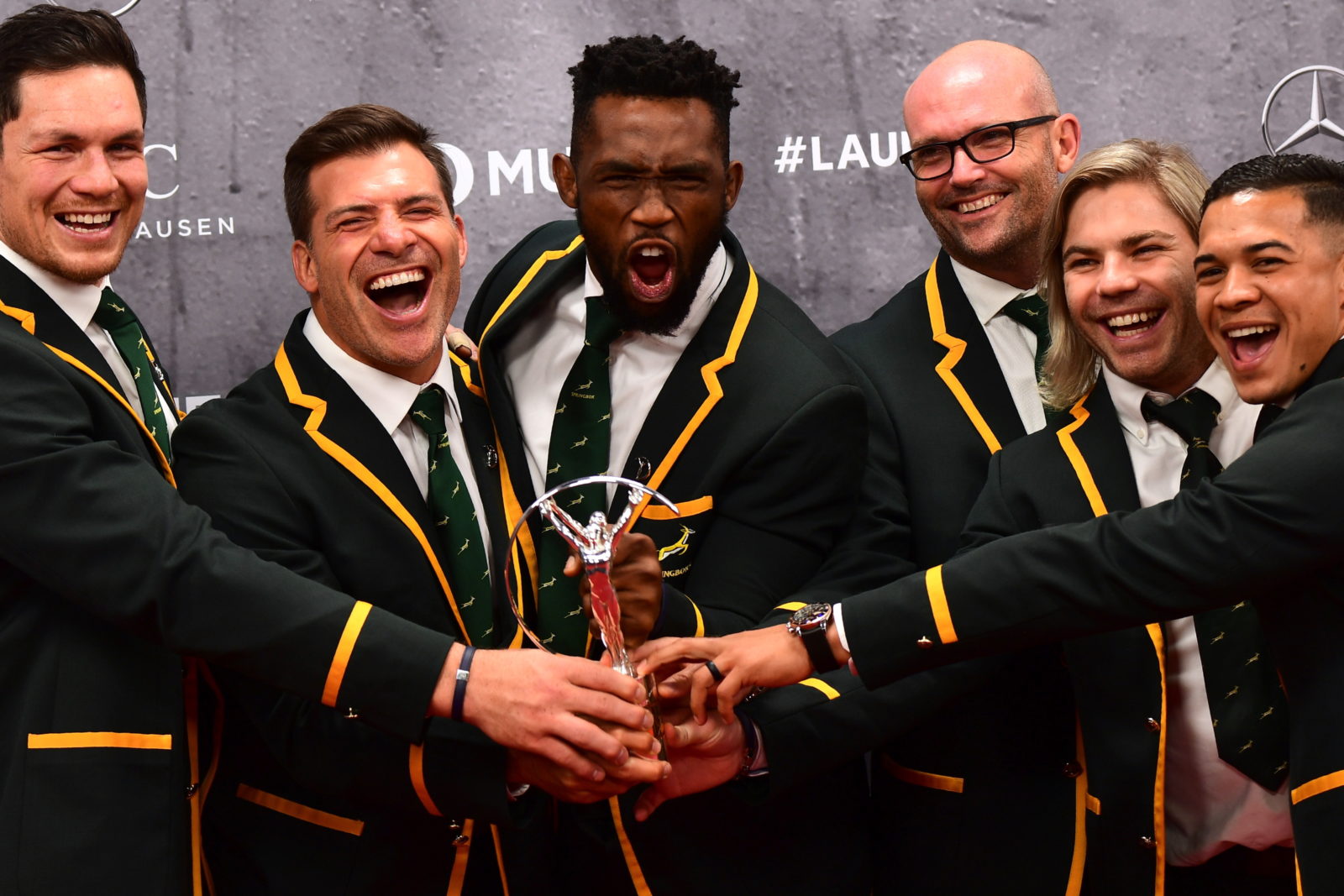 Siya Kolisi and his Springbok teammates were honoured for their achievements in 2019 at the Laureus World Sports Awards on Monday night.

The accolades keep coming for the Springboks after they were named World Team of the Year at the 2020 Laureus World Sports Awards in Berlin on Monday night after winning Rugby World Cup 2019 in Japan.

Kolisi’s team became the third Springbok side to win the World Cup following the 1995 and 2007 vintages and they joined the All Blacks as three-time winners of the Webb Ellis Cup.

It’s the second time the Boks have picked up the prestigious Laureus gong in the 20-year history of the awards, which has grown into the “Oscars” of sports thanks to the endorsement of Nelson Mandela as the first patron of the event.

The 2007 World Cup-winning Springbok team was honoured with the same award at the 2008 Laureus ceremony. The 2020 Laureus win though, had more resonance as Siya Kolisi, the first black Springbok Test captain, took to the stage in Berlin to accept the award from fellow South African and Laureus founder Johann Rupert.

Kolisi, wearing a brace on his left knee following an injury sustained in round one of Super Rugby three weeks ago, was flanked by RWC 2019 teammates Faf de Klerk, Schalk Brits, Cheslin Kolbe and Francois Louw as well as new Bok coach Jacques Nienaber. RWC 2019 winning coach Rassie Erasmus, in keeping with his low profile, did not attend the ceremony.

The Boks, who beat England 32-12 in the final of Rugby World Cup 2019 in Yokohama last November, had to beat off some stern competition for the Laureus award in the German capital.

“The real winners today are the five million kids and the lives that have been touched through the Laureus Foundation,” Kolisi said.

“To all the nominees and winners, you have all inspired myself and my teammates on our journey. When Mr Mandela spoke 20 years ago about the power of sport to unite, I can honestly say I felt it first-hand.

“In 1995 I was a bit too young to remember that win, but in this group we had Afrikaans speaking guys, Xhosa guys and guys from farms. We all lived through different challenges, but we came together because of the game that we love, which is rugby.

“We came together because we had one goal and we fought so hard for each other because our country at the time was going through such a difficult period. There was gender-based violence and xenophobia and our main goal was to come together and do the best we can in the sport we love.

“We gave everything we had and we not only saw South Africa come together when we brought back the trophy, but we inspired a lot of kids to live their dreams.

“Now a kid from the township, who didn’t have shoes to walk to school and who didn’t eat each day can stand here and be a Rugby World Cup-winning captain.

“Cheslin Kolbe has a beautiful story too. He has been told that he can’t make it so many times (because of his diminutive size) and he fought against that and now he is one of the best players in the world. Francois Louw comes from a family with a rich rugby heritage (Louw’s grandfather is former Bok and Western Province president Jan Pickard) and he had to fight a battle to make his own path.

“I want to say thank you to the guys who have done it before such as Bryan Habana and Jean de Villiers (who were in Berlin) and also thank you on behalf of South Africa.

“To all sportsmen and women. Just keep on doing what you’re doing because it’s not just about you. There are people looking up to us and we touch people’s lives in ways that governments and politicians can’t.

“You can touch and change a child’s life even if you don’t know who he is or where he is from, but he looks at you and says: ‘one day I want to be like that.’ ”

The Boks not only won RWC 2019 but also the 2019 Rugby Championship, becoming the first team to win both titles in the same season.

Following their RWC triumph they were also named as the World Rugby’s Team of the Year with flank Pieter-Steph du Toit winning the World Player of the Year award.

“We are absolutely bursting with pride and would like to congratulate Rassie, Siya and the Springbok team, as well as the management for receiving this fantastic award,” SA Rugby President Mark Alexander said in a statement.

“They were so heroic on the field and through their excellent off-field conduct, they were true examples of excellent South African ambassadors.

“Our country can be very proud of this team and what they have accomplished in such a short space of time. They made an amazing turn-around to establish the Springboks once more as a major force in world sport.

“On behalf of SA Rugby, I would like to congratulate the entire Springbok team and management on this fantastic accomplishment. We saw how powerful a successful Springbok team can be, uniting South Africans from all walks of life, and we are immensely proud of their achievements.”

US gymnast Simone Biles won Sportswoman of the Year for the third time, while F1 champion Lewis Hamilton and football great Lionel Messi shared the title of Sportsman of the Year.

Six-time Formula One world champion Hamilton and six-time Fifa World Player of the Year Messi were so close in terms of their achievements in 2019 that even the ultimate sporting jury, the Laureus World Sports Academy, could not split them, with the voting being tied for the first time in the 20-year history of the Laureus Awards.

In 2019, Biles continued to push the boundaries of the sport of gymnastics. At the World Championships, the 22-year-old won five gold medals, including a record fifth All-Around world title and helped the US win a fifth straight team medal.

Biles has now won 25 World Championship medals, confirming her as the most decorated gymnast in history.

In the Laureus Sportsperson of the Year with a Disability category, Oksana Masters, born with limb impairments caused by radiation from Chernobyl, and adopted by an American single parent, was recognised by the Laureus World Sports Academy for an outstanding year in 2019. She won five gold medals and a silver at the World Para Nordic Skiing Championships, plus the cross-country overall World Cup title. She also won silver medals in the road race and time trial H5 at the Para Cycling Road World Championships.

At 22, Laureus World Breakthrough of the Year Egan Bernal became the youngest rider to win the Tour de France for 110 years, wearing the yellow jersey down the Champs-Élysées in what was only his second three-week classic event. A proud Colombian, Bernal’s win united his nation back home as he became the first Colombian to win the world-famous cycling event.