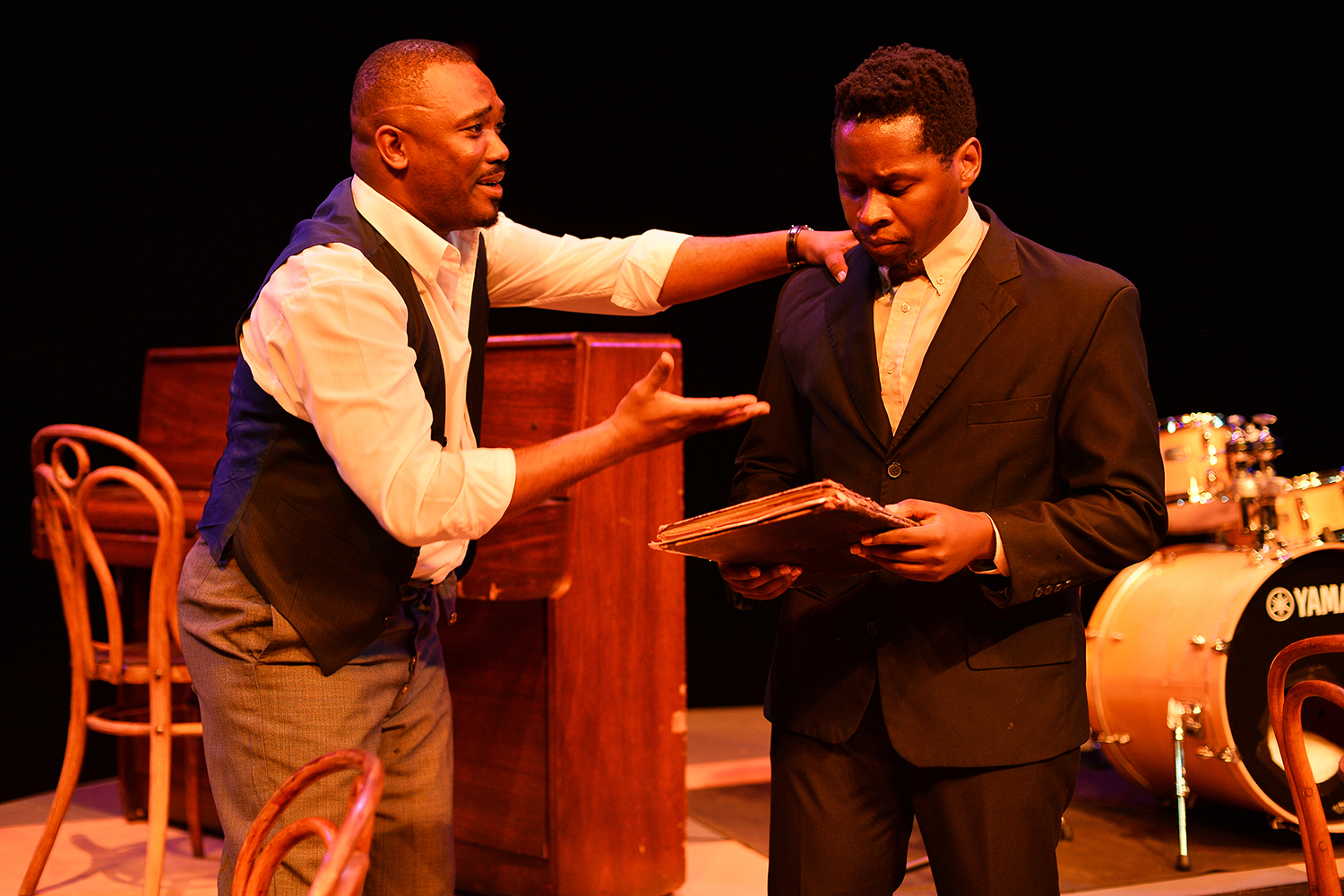 Black History Month is a time for the celebration of African-American accomplishments. But it is also a time to contemplate the much more difficult aspects of America’s legacy. A play now on at the Market Theatre, ‘Paradise Blue’, examines one of these.

Thus, back at the beginning of February 1926, Woodson had issued a press release announcing the first Negro History Week. He had chosen February because it contained the birthdays of both Abraham Lincoln and Frederick Douglass, two men whose historic achievements African-Americans were already widely celebrating. Lincoln, of course, had led the nation through a civil war that ended slavery in America, and Douglass had first been an escaped slave, then a powerful, influential writer and abolitionist. (Lincoln’s birthday was 12 February; Douglass, a former slave, hadn’t known his actual birth date, but he had marked that occasion on 14 February.)

In explaining the rationale for this commemoration, Woodson had written, “If a race has no history, if it has no worthwhile tradition, it becomes a negligible factor in the thought of the world, and it stands in danger of being exterminated.”

Woodson’s idea gradually caught on more broadly across the nation. With the times, its name was transformed, and the commemorative period was extended out to become “Black History Month”.

This celebration has now gained official recognition through annual presidential proclamations, as schools, community bodies, arts and cultural groups all embrace a history that consists of much more than that old-style litany of a few key African American dates and figures from the country’s history.

Moreover, in recent years, it has now gained official recognition in countries beyond the US, including Britain, Canada, and Germany. Not too surprisingly, in South Africa, with its own rich black historical tradition, and varied connections with American life, Black History Month now has increasingly taken hold on imaginations on the African continent as well.

As part of this tradition, for half a decade, Johannesburg’s Market Theatre has been staging a dramatic work each February, drawn from a large repertoire of works by black American playwrights, specifically in recognition of Black History Month.

The theatre has, of course, been presenting works by American playwrights since its opening back in 1976. Arthur Miller’s The Crucible was its second staged work. But this new tradition (underwritten by the local US embassy) has put the spotlight both on renowned works by black American playwrights such as Lorraine Hansberry’s A Raisin in the Sun, as well as important contemporary plays by a whole cohort of newer black dramatists.

In this regard, over the Market’s history, it had staged important works such as August Wilson’s Ma Rainey’s Black Bottom. It had also been the venue for lesser known but still compelling works such as Tarell Alvin McCraney’s Brothers Size and Jeff Stetson’s The Meeting.

For this year, artistic director James Ngcobo selected Dominique Morisseau’s Paradise Blue, a work that brought the circumstances of the people in a black-owned jazz club/boarding house together with the larger social and political realities hovering over Detroit’s impending urban renewal plan in the mid-20th century to tear down one of the city’s old black neighbourhoods, Paradise Valley.

Detroit, despite its location in the northern part of the country, was also a thoroughly segregated city. Accordingly, “urban renewal” there could easily be read as a sub rosa effort to achieve what was cynically, but often truthfully, referred to as “Negro removal”.

Or, as Detroit’s mayor Albert Cobo had said in explaining urban renewal plans for his city, “These people and others living on marginal incomes from pensions and social securities from the roll call. I get so edgy to send men to one of those hotels for a night. You’ll never know if they’ll make it without getting beaten up.

“Sure, there have been some inconveniences in building in our expressways and slum clearance programmers, but in the long run, more people benefit. That’s the price of progress.”

Morisseau is already an acclaimed playwright, including writing the book for the award-winning Ain’t Too Proud – the Life and Times of The Temptations, among other works. In Paradise Blue, she has drawn on the idea of the tavern/pub/nightclub as a kind of secular confessional and the place for the exposure of blasted dreams, reminiscent of how Eugene O’Neill had used it in Long Day’s Journey into Night. But she also mixes into this work another sensibility – one certainly familiar to South African audiences – of the imminent destruction of a thriving black community by a government diktat. In South African theatre, this had been realised by the Junction Avenue Theatre Company and Malcolm Purkey’s own iconic work, Sophiatown. This work, created in the mid-1980s, was one of the most important works of the Market Theatre’s anti-apartheid, protest theatre tradition, and it remains a vibrant window into how life was.

We spoke with Ngcobo about his production of Paradise Blue – and why it so appealed to him that he wanted to direct it. One obvious answer was the correspondence between American urban renewal in the 1950s, and the current, strongly contested examples of gentrification in both Johannesburg and Cape Town neighbourhoods such as the Bo-Kaap, as well as the equally fraught gentrification in old, well-established, largely black neighbourhoods in cities like New Orleans and Washington, DC.

Morisseau, like a number of other contemporary black playwrights, has focused her attention on the way a community can literally vanish from acts of callous officialdom, coupled with residents’ fears and greed, mixed together. Intriguingly, that famous work from more than a half century ago, A Raisin in the Sun, had taken a different look at the neighbourhood upheaval evolving out of urban renewal and redlining. In that play, the fortuitous arrival of a small inherited windfall allows Hansberry’s characters the opportunity to move out of their crowded ghetto home and away from its increasingly squalid neighbourhood, rather than betting their future on rebuilding their surroundings and staying put.

Perhaps this divergence reflects the fact Hansberry was writing her great play right at the beginning of the modern civil rights struggle, while Morisseau’s dramatic universe is more rooted in our contemporary, more identitarian times, where holding on to a neighbourhood can be the close equivalent of saving a community – and its people – from obliteration.

As for the “why” of staging such works, Ngcobo explained, “I feel very strongly that if you introduce content [like the Black History Month plays] you should stick with it. We have introduced playwrights that have never been staged at the Market.”

But the question lingers, is Black History Month creating a kind of theatrical ghetto for such works, rather than doing such projects throughout the year?

In response, Ngcobo answered, “In our eclectic mix throughout the year, you can see other works that are not just part of Black History Month.” And, he adds, plays like this one on the stage of the Market may be the only place on the entire continent where one may see such works. But, “I feel very strongly about South African audiences seeing works that are not from our own environment.” And as if to answer the question about the universality of works like this one, Ngcobo adds, “Not one of us – actors, director – have ever been to Detroit, yet we [South Africans] know of the pain of urban renewal.”

And as for why he insists on doing works that have a historical context, rather than more contemporary works about today’s events and today’s people and their problems, and in response to critics who may ask why such older stories now are getting their hearing on the Market’s stages, James notes, “We have developed an audience for these kinds of plays.” They have universal themes contained within them, he adds. Critics don’t criticise doing a work by Aristophanes (or Shakespeare), after all.

But in the course of doing such works now, has there been any ambivalence of feeling about accepting money from the US embassy in these trying times, given the policies of that country’s current government? He pauses, then admits that, yes, “I have some problems with it, but if we put a pause on it [this Black History Month play series] we will be frustrating what has been going on at the theatre. We had a vigorous discussion at the theatre about just that question, but in the end we agreed and went ahead.”

Can this play make sense to local audiences, given its deeply American textures? Ngcobo agrees that, yes, it is a political play, but the director must structure the presentation such that it gives audiences a lifeline to help them find their way to the play’s core.

Ngcobo is really into it, talking rapid-fire now – as he does when his enthusiasm is racing ahead. Now he is explaining about plans to tour this play to other theatre spaces in South Africa, as well as the possibility of taking it to other parts of the continent.

And so we speak about other future American works that could fit Ngcobo’s template for engrossing theatre for Black History Month – or any other month, for that matter. Such ideas sound truly exciting and challenging, but he swears me to secrecy – at least until everything is firmly locked down and all the paperwork is signed. Sadly, we agree to hold back, at least for now.

And as for this production of the play itself, Morisseau’s Paradise Blue, Ngcobo has brought together a strong cast of veteran South African actors – Lesedi Job, Aubrey Poo, Pakamisa Zwedala, Busisiwe Lurayi, and Sne Dladla – with the support of musicians Mpho Kodisang and Sakhile Nkosi, under the musical direction of Tshepo Mngoma.

The production has the moody texture of people who are beginning to realise they are living on borrowed time. Job’s mysterious character, a kind of biblical Lilith temptress figure, arrives just as things in the club – and for its denizens’ lives – are coming unstuck. She has her sights on taking advantage of the impending neighbourhood renewal by buying up the club for herself.

At the end, there is an unexpected explosion of catastrophic violence. But even with that explosive moment, the play offers no easy outcomes, no snug denouements, and no tightly tied-up knots at the end. Such a structure can frustrate some who like it all wrapped up, but it will intrigue others since life is so often just like that. Untidy.

Paradise Blue is on stage at the Market Theatre until 1 March. DM

Full disclosure: Spector has a minor role as a voiceover artist for this production.

Book Excerpt: Outbreaks and Epidemics, the first book to cover the coronavirus

How to write a plague diary

The Casual Gamer: Ori and the Will of Wisps, the perfect escape for a time such as this