Picnic for One: When you end up being your own Valentine 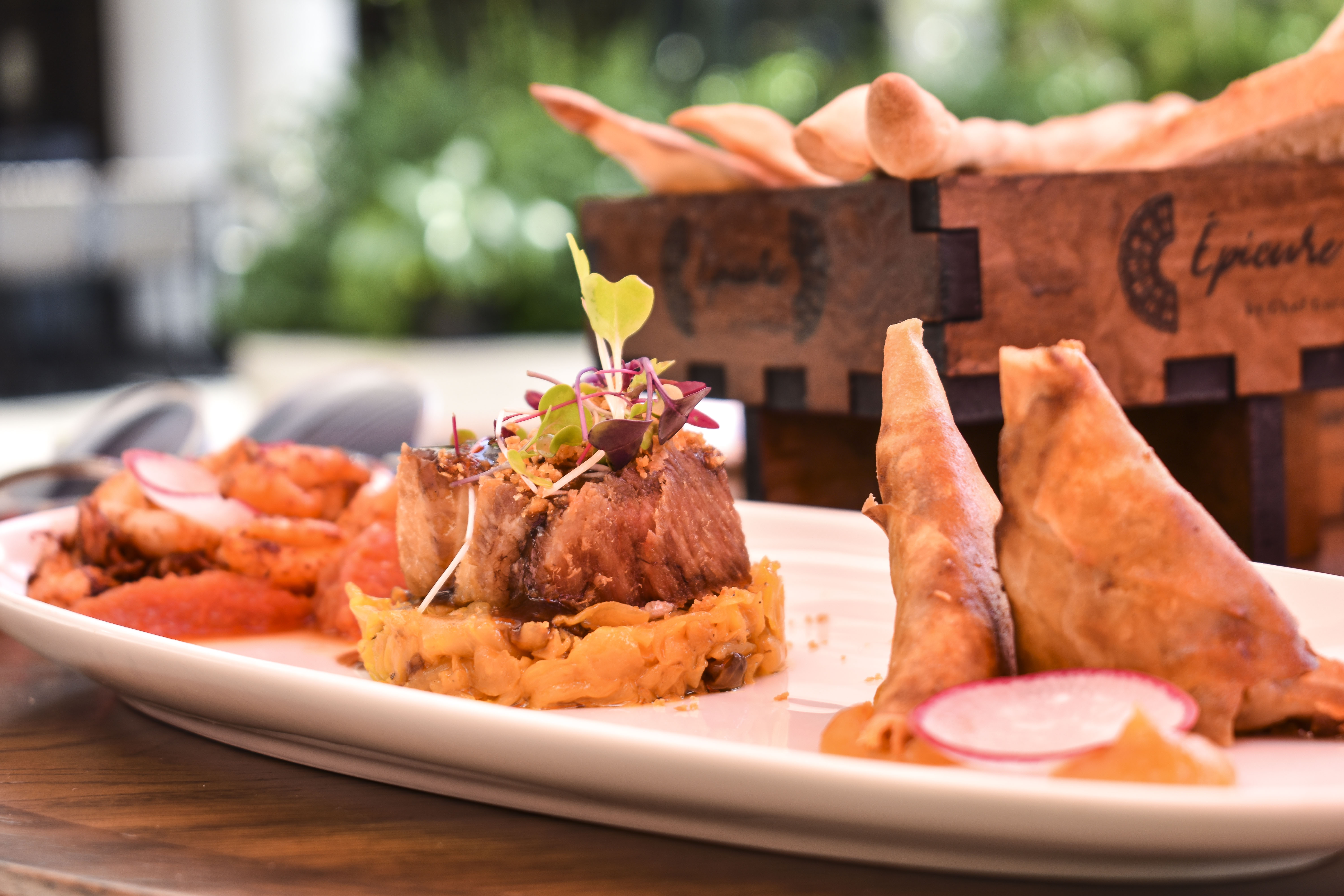 Such an odd idea. An unintentional one, as it happened. And an experience that has altered my perspective of picnics.

At my solo picnic by chef Coco Reinarhz, adjoining his Epicure restaurant in Morningside, Johannesburg, laid out before me on the lush lawn was a picnic-scape of different heights and styles, a fetching scene. Through it, waiting staff carried French apple baskets, containing silver ice buckets, to deposit at tables. Some tables were very low and surrounded by velvety sofas, some tables of wicker with padded chairs, some brass tables. This scape was constructed under its own canopy cloud of wide umbrellas, on an extremely hot day. There were tables for 12, six, four or two … and one table for one. For me.

Of course I love sharing food but I’ve found that not sharing it is pretty damn marvellous too. Being selfishly free to order anything, absolutely anything, as garlicky or messy as you like, any drink you fancy, to laugh with other people or not. Silently appreciating the landscape and its people somehow beats chit-chat, but then I’m an introvert anyway. However, this picnic’s food promised to be too unusual and interesting to miss just because the friend that had been going to meet me here found herself unable to make it on the day.

I had simply called in and said, “Make that picnic for two a picnic for one.”

So I found myself ushered to my own Parisian café style table with its glamorous yellow velvet chair, under a huge golden umbrella seemingly designed to enhance the glory of my picnicky Aperol spritz.

“How would this be?” asked my usher. I was delighted.

Not that long ago I was very surprised to find that a picnic is defined as an outdoor meal, when I thought it meant sitting on a blanket with ants, a dog whose snout has constantly to be removed from the picnic basket, and more people that can ever really fit on a blanket. I assumed the basket always had to be a wicker, rectangular and creaky thing with strapped-inside plates and cutlery, some of which always got left behind, and the basket’s dimensions such that the corners dig into your calves as you or anyone else lug the heavy contraption to the best “or-maybe-better-there-or-see-there?” spot. I am not over those picnics though, despite the obvious odds.

Beyond the tables was a soccer section for kids on the vast lawn. At each end were pristinely white, small-scale goals.

While I paid olfactory attention to some wooden picnic boxes containing warm pittas, just-baked sourdough and grissini, I watched a small boy dragging one presumably very light goal around with him wherever he wandered, the other thumb in his mouth.

One of my boxes also held creamy cooled butter and a container of thick chickpea and vegetable dip, just right for breaking bits of the sourdough and introducing them with my fingers. It was then I noticed there were a helluva lot of hats about me. Most of them were enormously, stagily floppy but there were smaller straw hats and, well, garden party hats and, among the minority of men, many were under hats.

It was the third day of the butterfly migration so they alit on many brims in between fluttering delicately towards Mozambique. It couldn’t have been prettier, one of the requisites of picnics.

For one of my birthdays, I’d once arranged a big picnic below the rose garden at the Emmarentia Gardens, having baked a selection of large cold raised pies, mainly because I’d found some real Edwardian pie rings. At one point I looked around my own picnic and admired the prettiness of the scene of friends who’d flopped down under the beech trees next to little rivulets and bridges, against the dramatic backdrop of the big fountains there.

But Chef Coco’s one was a picnic with some classy differences. It had a menu. It had about eight alert waiting staff on the periphery in navy uniforms and it even featured a sommelier. Most people seemed to have champagne flutes in their hands, as did I at a later point when a group of women sent over a glass of Graham Beck, waving cheerily to me as I received it.

The aspect that had most attracted me there was that the food at the picnic was to be a mixture of traditional African and Modern African cuisines. I poured over the menu, smooth Seventies oldies by Barry White mixed with cool lounge jazz keeping me company.

On the Traditional side, the idea of calamari in Nigerian suya spices seemed exciting, but so were Moroccan samoosas with duck fillings. I was persuaded to have some of both. When a picnic board arrived, the calamari and the samoosas were standing in a row, alongside a little piece of Cape-spiced pork belly “to try” with its piece of crackling and bacon sauce on a small mound of cabbage bredie.

I have vowed that all my future picnics will always include samoosas. Till now, I’ve considered that picnics, when they were no raised pies, had to be about Scotch Eggs. The edges of my old green rug have been the undoing of many a Scotch Egg half when people  trip over the fringes. It’s a regular thing. Dogs also like Scotch Eggs, even snatched from the air.

I might not always have the pull-tender duck that Chef Coco has from his duck tagines, with which to stuff the samoosas, but I’ll darn well try. They have proved to be my most delicious examples of picnic food to date, bulging with rich duck meat.

So inured am I to that “Falklands” type calamari that it was a relief to eat real, untreated calamari, produced in the kitchen to be naturally tender, still al dente. The Nigerian suya spice turned out to be a melange of ginger, chilli and ground kuli-kuli nuts.

Apart from the little boy dragging his comfort goal, there were quite a few other children with families. They mostly chose the low tables for setting out all their foods. At the table next to me a brown-skinned girl had pinned a soft pink-skinned doll with yellow hair to the table edge and was studiously feeding cooldrink into the pink doll’s belly button.

For my main from the Modern African side, I had more Seventies sounds by way of Manu Dibangu’s Soul Makossa to inspire and knew I lusted after bacalhau with its own stew of beans, chickpeas and chorizo. The fish skin came crisped and there were equally crispy rounds of plantain, madly attractive to the bacalhau. I was told a little bit of Jollof rice had also been added around it, also “just to taste”.

Then it was that time of the afternoon when people with and without hats went trailing around in the gardens, champagne flutes in hand. The only people sitting on the grass itself were a woman stroking a Yorkshire terrier and another comforting her little son who’d been shunned by some slightly older boys.

At another long table near me, the table had earlier been set, unlike the rest of the tables possibly for a birthday, strewn with red chillies and fish bowls of red fruit. Behind the guest closest to me was an interesting still life on the grass, near her chair. It started with a L’Occitane carrier bag. Any even vaguely French person, like Canadians, all use l’Occitane products, especially on their hands. These women were mostly speaking French though some were chatting marketing in English, about budgets being revised and such. We were in Morningside after all, where more French-born and French-speaking people live than in any other part of Joburg. Resting on the carrier was the gift-giver’s own yellow linen hat and, on that, rested a fan made of colourful Congolese cloth.

By then the music was live, played by an electric guitarist accompanied by a fiddler, and the conversation levels across the park were rising.

I had earlier made a decision about my pudding course, a square of caramelised date with a lemon and white choc marquise. I can’t say I was really surprised when I saw a waiter bearing another long picnic plank with other small items of desserts “to taste”, along with my date choice. I was realising these could be the perks of being a solo picnicker.

Something I might not have ordered that was a tastebud surprise, tried with my teaspoon, was a slim slice of cassava cheesecake layered with activated charcoal, alongside a blob of the charcoal as chantilly but tasting of lime. There was a small piece of buchu crème brulée, nut-dusted. That was next to a crumble of choc brownie with fast-melting dark choc ice cream, Amarula mousse and a dramatic oaten tuile. At the opposite end was a choc-coffee fondant with amasi ice cream. Perhaps my date square had seemed to the staff like a disappointing order when there were all these other wonders, exquisite, even as teaspoonfuls.

At the tail end of my usual picnics, someone would unceremoniously be dragging off the old basket and I’d just bundle up the green tartan rug and stuff it into the boot to shake out back home. At the same point in the afternoon here, my heavy chair was pulled out for me and I swung out to the music, to the sound of goodbyes from the champagne girls, the sommelier and the service staff who had made my Picnic For One such a surprisingly special feast. DM

Chef Coco’s chic picnics are on the first Sundays of months in the piazza gardens of Central Square, where Épicure Restaurant is, in Morningside. 010 594 5336