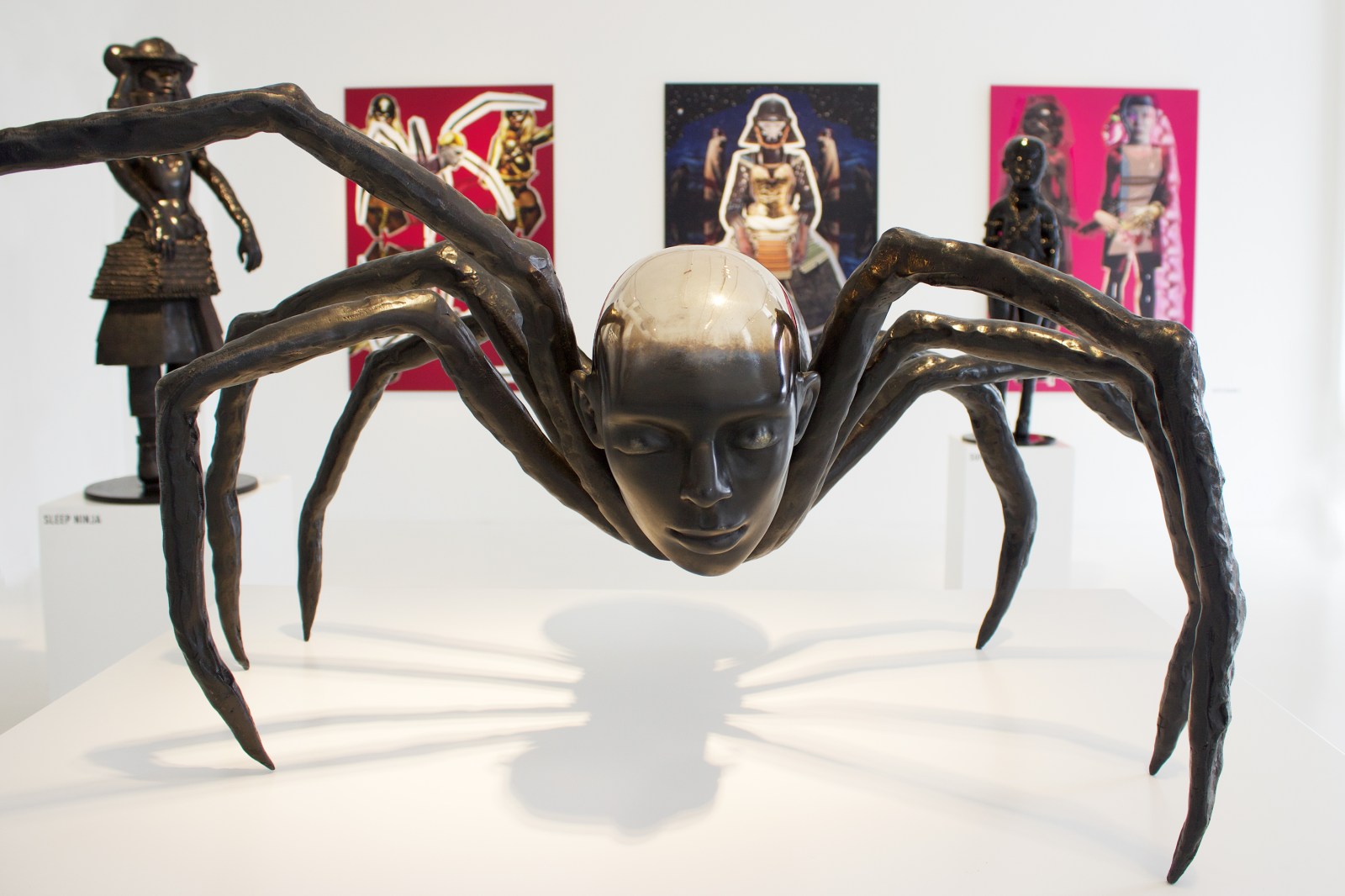 With her third solo exhibition, Justine Mahoney is claiming her space, defining her medium and defying categorisation.

When I meet artist Justine Mahoney at the Bronze Art Foundry in Cape Town, she’s high above me, kneeling on a scaffolding deck, working on Venus’s torso, a three-metre tall painted bronze sculpture. “This one is called Venus. Actually, the life-size version, the smaller one, is on her way back from Miami, she didn’t make it in time for the show. A collector who saw her there commissioned this three-meter high piece. That’s how she was born,” Mahoney explains.

The piece, in its life-size 165cm version, is one of nine sculptures that make up Mahoney’s third body of work, her latest exhibition, Mage, which is on show until 27 May 2020 at the Southern Guild gallery in Cape Town. At first glance, the bronze piece hides its true materiality, the upper body is painted in a shade of white, bearing a slight resemblance to the marble sculptures of old, to Venuses past, De Milo and others. The bottom half is made of gold-painted cyborg legs, resembling Star Wars’ beloved C-3PO.

The feet are adorned in chunky shoes, painted in child-like pastel shades,  reminiscent of Mahoney’s previous work and colour palette from her first major body of work, the Innocence series. The small sculptures that made up that collection were mostly of kids, at once cute, decorative and adorable in pastel hues, but upon closer inspection, none of them had eyes and one was wearing a cast on their leg. There was a sense of unease, that not all was well. Much of it a reference to the artist’s own childhood in 1970s South Africa, the knowing and the not knowing, that something was wrong.

Even as Venus’s shoes hark back to Mahoney’s earlier work, the naivete of old seems to have disappeared, in both the artist and the work. What does remain, however, is the artist’s pop sensibility. Long before the sculptures are cast, her process begins with characters created as collages.

“I’ve got a huge collection of imagery that I scanned into my computer. When I was a teenager growing up, I also used to make a lot of collages. And I still make the same type of collages. When I work, I grab elements, with the idea of transformation in mind, be it heads, feet, bodies, legs, I bring them together and transform them into whatever they feel they need to be. They kind of tell me what they need. I work on about maybe 50 collages at a time, then select my best ones, which then kind of become my guides for the sculptures,” says Mahoney.

Indeed, a closer look at the collages that hang behind the sculptures at Southern Guild reveal what seem to be disparate images, brought together to create cohesive figures. The images themselves are very much rooted in popular culture. There’s singer FKA’s twig face, combined with elements of what looks like images from different fashion editorials, which make up Mahoney’s Majesty collage. Another collage, Sufferance, features pink hair, thigh-high latex stiletto boots, among other images brought together to form a body, an identity.

As for the sculptures, bar Venus’s shoes, the pastel hues are gone. If discomfort was suggested by missing eyes in the Innocence series, and the schizophrenic nature of South African life alluded to in bright colours of her follow up 2017 exhibition, Tainted, Mage rips off the façade and lays bare the contradiction of life, growth, identity.

“With this body of work, I’ve started to work in a traditional way, but in my own way. I’ve used a lot of patina and old methods of working with the actual bronze. It also feels to me that I’m in a bit of a transition phase moving away from the sugar-coating and more into … not a masculine way, not at all … but rather using a sort of the traditional kind of way of working.”

Mahoney’s style of working, her aesthetic, her particular affinity for pop culture hasn’t endeared her to the art gallery ecosystem over the years. “You know, I’ve never ever really fit in anywhere, I’ve never been accepted anywhere. Actually, it’s been very hard for me to breakthrough. I didn’t …” she pauses, trying unsuccessfully to hold back the tears.

Since 2014, Mahoney has been represented by Southern Guild gallery. Founded in 2008, the gallery has successfully positioned itself as a pioneer when it comes to collectible South African design. Their roster of artists and designers features celebrated names such as Andile Dyalvane, Atang Tshikare, Gregor Jenkin and many more. Much of their work defies categorisation. One would be hard-pressed to simply dismiss the sculptures from the likes of Tshikare as having no place in the world of contemporary fine art. The gallery will have a booth at the February 2020 edition of the Investec Cape Town Art Fair. “Southern Guild actually started by showing at the Joburg Art Fair for three years before we had a gallery space. So we’re very excited to be showing at the Cape Town Art Fair. Globally there’s a blurring of lines between what is considered design and what is considered art. Major art galleries and art fair are now starting to integrate what might have been considered strictly design into their programmes. And the art fair audience is the right audience for the kind of work we show,” says co-founder Trevyn McGowan.

Indeed, examples such as the acclaimed Haas Brothers, who for the longest time were considered strictly design, then in 2018 showed at Art Basel, and signed up with art dealer, Marianne Boesky. There are numerous examples of similar transitions. Justine’s own experience of being represented by a design gallery is one she speaks of fondly: “They have treated me so incredibly well and they’ve nurtured me as an artist. I studied fine art and it’s been quite a battle for me moving into a design field coming from a fine art background. But then I embraced it because I was… you know…” another pause, holding back the emotion. “I didn’t… it was so hard for me and I’ve been treated so badly actually, by most gallerists.”

I imagine that indeed this is an emotional moment for the 49-year-old artist. Since completing her studies in 1991, she also took time off to raise her children, she has shown her work at group exhibitions and she has steadily built a collector base.

“People who collect my work connect very personally with it. My collectors have been really amazing and supportive … I took quite a bit of time off to bring up my children when they were little. And I had already sold a couple of pieces to some collectors before then, and then it took me like 7-8-9 years to come back and those collectors actually recognised my work instantly when I started to show with Southern Guild, and I’ve received so much support from them.”

We get back to chatting about 3m tall half-cyborg Venus towering above us: “She’s the icon of love and beauty. And at the same time, she’s a cyborg, she’s half-human, half-machine. It speaks to how maimed we are in a society where we are so dependent on technology; our idea of beauty is understood via Instagram, people scrolling and become obsessed with the visual of themselves reflected back at them again and again. She also has a pair of headphones on so she’s not even engaging.”

If you have done research on the subject, or would like to share more ideas on the matter with us, please leave a comment below and we will be in contact. You can also email us at [email protected] and [email protected].