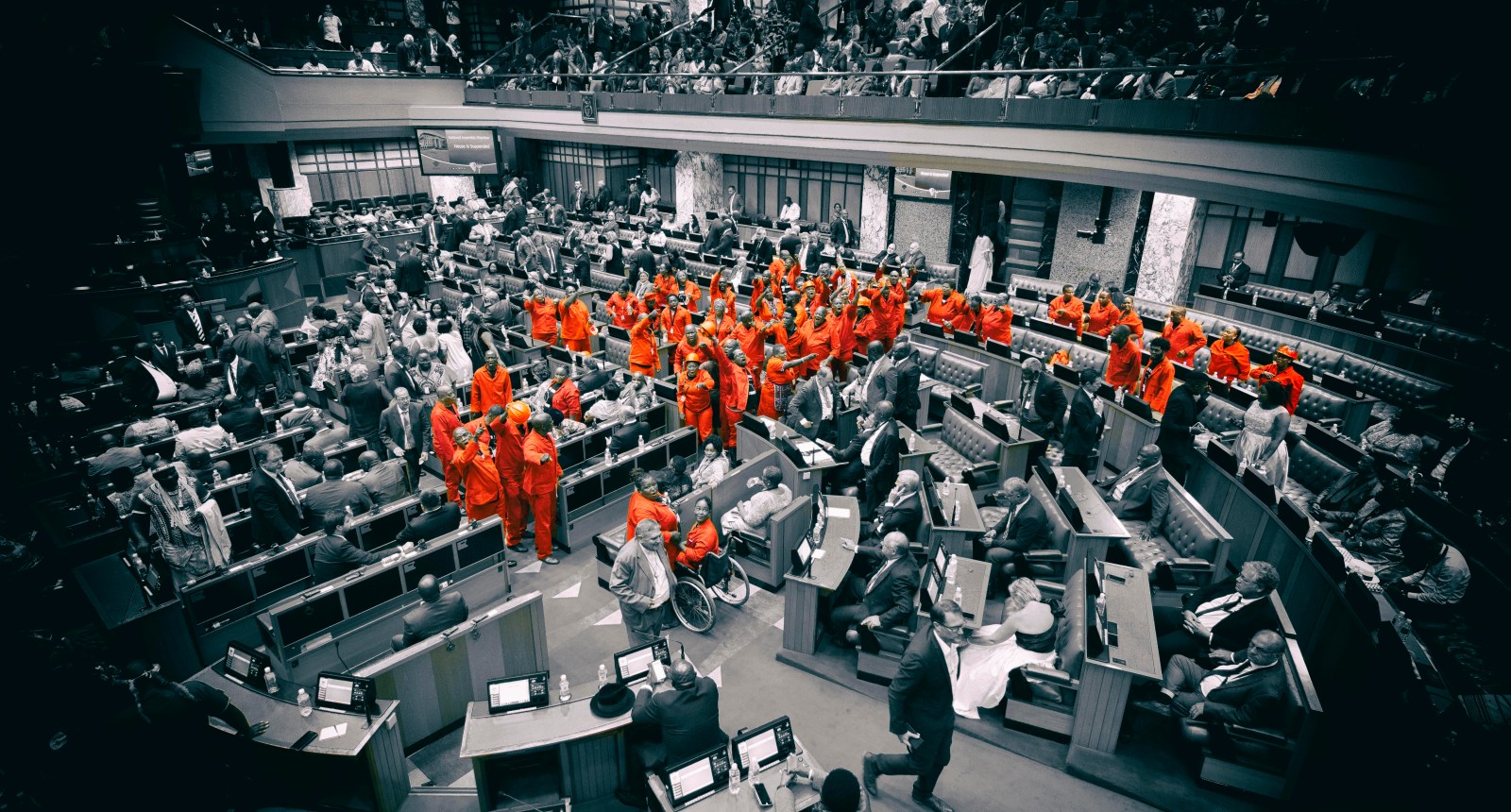 It was a night where President Cyril Ramaphosa would be facing a disillusioned nation and a fiery opposition. He could use a little extra star power – and he got it, in the shape of Miss Universe Zozibini Tunzi and Springbok captain Siya Kolisi.

In the days leading up to SONA 2020, it looked highly likely that a former president was going to dominate headlines and disrupt Cyril Ramaphosa’s big night.

And so it proved to be. It was just another former president who turned out to be the fly in the ointment.

In the end, Jacob Zuma did not make the trip from his Cuban medical facility to attend the State of the Nation Address, in conflict with a bout of premature tweeting from Parliament which caused officials much embarrassment and clear frustration.

It was apartheid’s last ruler, FW de Klerk, who would take up the mantle of the most divisive former leader in the room.

There had been some signs that this might be the case: the commemoration of the 30th anniversary of the release of Nelson Mandela from prison had occasioned the spotlight to fall once again on De Klerk. Consistent in the latest expressions of support for Zuma from groups like the ANC Youth League and the MKMVA had been outrage that De Klerk is still treated with “dignity” while warrants of arrest can be issued for Zuma.

Even Ramaphosa had seemed to jump on the anti-FW bandwagon in the days ahead of SONA, reminding an audience at Cape Town’s Grand Parade on Tuesday that Mandela had been released “not out of the kindness of FW de Klerk’s heart”, and “not because he felt sorry for Nelson Mandela”, and “not because he was a kindhearted man”, but because pressure had pushed De Klerk into a corner.

A Change.org petition to ban De Klerk from attending SONA had attracted just over 1,500 signatures.

But when the hour arrived, De Klerk duly entered the National Assembly – as he has for almost every SONA since democracy – with his wife Elita, and took up his seat in the VIP section. There, he was greeted warmly by former National Assembly speaker Baleka Mbete, who perhaps relates to the sensation of being forced to give up power before one wishes to.

Exactly when the EFF decided to make De Klerk their big target of the night is unclear; beforehand, the Fighters had indicated that Public Enterprises Minister Pravin Gordhan was to be their designated SONA scapegoat. But while Gordhan remained in their sights, it was De Klerk who was to receive both barrels of the EFF’s attention – forcing Speaker Thandi Modise and ANC MPs into the unenviable role of defending the presence of apartheid’s last president.

“Honourable Speaker, we have a murderer in the House,” began EFF leader Julius Malema in typically dramatic fashion. It was an initially ambiguous statement, because the EFF has accused a number of politicians – among them Ramaphosa, for his role in Marikana – of similar crimes.

But the target was soon revealed. De Klerk, described as “an unrepentant apologist of apartheid” and “the commander of Vlakplaas”, was ordered by the EFF to leave the House.

In vain, Modise explained that it was “convention” for all former presidents to be invited to SONA, to which EFF MPs heckled in response that De Klerk should not be viewed as a former president as he was elected only by a minority of the South African population. It emerged that another sticking point was an interview given by De Klerk recently in which he again seemed to downplay the status of apartheid as a crime against humanity.

De Klerk and his wife sat stony-faced in silence. Former deputy president Kgalema Motlanthe, sitting next to them, could be observed wearily rubbing his face.

“Are we going to go on and on and on on the matter of former president De Klerk?” rhetorically inquired Modise – a question which caused howls of assent from the ranks of the EFF.

Recently axed EFF spokesperson Mbuyiseni Ndlozi decided to make his appeal more personal, addressing Modise and the wider ANC caucus directly: “You are a commander of Umkhonto weSizwe. You in the ANC said we must reconcile with these people because they accept the mistakes that they made… You must be ashamed, sitting here clapping.”

Parliament’s oldest member, the IFP’s Mangosuthu Buthelezi, had a suggestion. MPs should vote on whether or not De Klerk was allowed to stay and watch the president’s address. It was an idea eagerly taken up by the EFF, presumably salivating at the thought of forcing ANC MPs to commit to a pro-De Klerk stance. But Modise wasn’t biting.

Amid the mayhem, the Fighters seamlessly changed tack to momentarily confine De Klerk once more to the dustbin of history and focus their energy on their more immediate nemesis: Public Enterprises Minister Pravin Gordhan. On to Gordhan’s head was heaped the blame for Eskom, SAA, and South Africa’s failing economy in general.

“South Africans know they are in darkness because of one man!” declaimed new EFF spokesperson Vuyani Pambo.

Ndlozi offered a simple solution to the stalemate: “Please fire Pravin Gordhan now so we can go!”

The evening reached its farcical nadir when ANC MP Boy Mamabolo rose to address the House in defence of parliamentary procedure. Mamabolo had his outfit – a white jacket with black lapels paired with a black bowtie – taken apart by Ndlozi in one withering line referencing a popular nuptial-themed reality TV show: “This is not Our Perfect Wedding!”

Mamabolo suggested that Ndlozi and his colleagues meet him outside to discuss this further.

“I am sure South Africa is not very proud of us tonight,” remarked Modise, switching the MPs’ floor microphones off. She declared the SONA proceedings suspended: as noted by Daily Maverick’s Marianne Merten, a move unprecedented in the democratic South Africa.

Resplendent in yellow, with her Miss Universe sash glittering, Zozibini Tunzi politely posed for selfies with a queue of adoring SONA guests and Parliament staff. Nearby, Springbok rugby captain Siya Kolisi was doing similar duty in his national blazer.

When proceedings resumed, with the EFF finally walking out unmolested and President Ramaphosa permitted to begin his very long address, it did not take long for Ramaphosa to draw the attention of the National Assembly to the two special guests.

As the two took turns to stand and wave to the House, a ripple of admiration and the most sincere applause of the night followed. Suddenly, everything seemed calm and under control once again. The contentious figure of De Klerk faded into darkness, eclipsed by the luminescence of Miss Universe and the Springbok hero. DM