Charné Sampson and the drive to advance young chefs 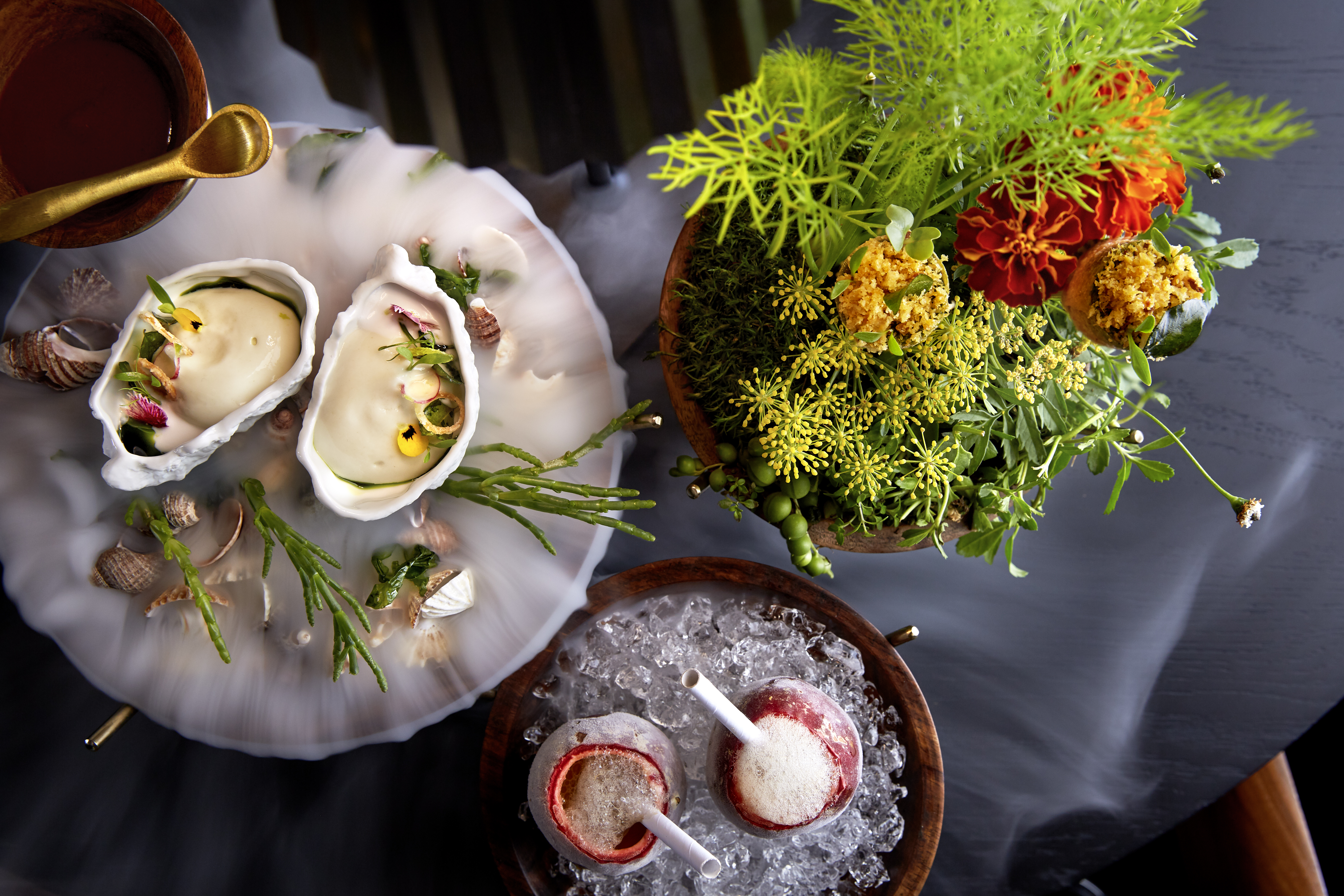 The three starters are served in a style which is a trademark of the La Colombe restaurants. Photo: Epice

Top restaurant groups are providing mentorship and opportunities for young chefs who show potential to lead their own kitchens. Charné Sampson, head chef of Epice in Franschhoek, is proof that mentorship works in companies with the will and vision to invest in their young talent.

Epice, the newest restaurant in the La Colombe group, opened in Franschhoek in December 2019 with 24-year-old Charné Sampson as head chef.

This is not the first time someone has risen through the ranks of this group to achieve the dream of running their own kitchen before the age of 30. Glen Foxcroft Williams, former pastry chef at La Colombe, opened Foxcroft in Constantia in 2017. To illustrate how intricately the threads of the culinary world are interwoven, Sampson worked in pastry with Williams for nine months at La Colombe; at the time, neither of them ever expected to be such shining stars in a hot kitchen. Just look at them now.

To untangle things slightly, the La Colombe group is headed by Scot Kirton, who began his career at Haute Cabrière restaurant (with no training). After some time at Gordon Ramsay’s Savoy Grill in London, Kirton returned to South Africa where he became sous chef at La Colombe, and then head chef at River Café, at Constantia Uitsig wine estate. When the farm changed hands and the restaurants were closed, Kirton stepped up as chef-patron at the relaunched La Colombe at Silvermist in Constantia.

Since then, he opened Foxcroft with Williams, as well as La Petite Colombe and Protégé in Franschhoek.

“It has always been a dream to have several restaurants. Over the last six years I have had some incredibly talented chefs work with us, which has made it easier to grow as a group,” says Kirton. “It gives me great pride to help these young chefs put their names on the map and help them achieve their dreams as they have helped me achieve mine.”

Similarly, Luke Dale Roberts’s group of restaurants includes The Test Kitchen, Pot Luck Club, Shortmarket Club, The Commissary and Salsify at The Roundhouse – all of which have been fertile training grounds for chefs who ascend to similar heights within the “family”.

“Mentorship is a cornerstone of every kitchen. It happens at all levels from the ground up,” says Dale Roberts. “People often think that a mentor has to be the leader but I’m convinced that, throughout life, we have many mentors that shape the way we are.”

Ryan Cole from Salsify says working within a “bigger group” can offer great potential for ambitious chefs. “You have the chance to push and to constantly hone your skills, to grow and to learn. When it comes to your own space, it’s an incredible opportunity, but also big shoes that you are intent on filling,” he says.

The process of expansion is a natural one, says Kirton. “When a chef shows enough potential and has the right attitude to want to be the best they can be, and step up to the next level in their career – and if we have an opportunity of a good restaurant site – then it makes it an easy decision.”

Kirton looks for chefs who are perfectionists and have passion, drive, and competitiveness to be the best. They must also have natural creativity, a good eye for plating, and highly educated taste buds. These are the boxes Sampson ticked.

“Charné has been at La Colombe since 2016. She began as a Silwood student and did her third year placement with us,” says Kirton. “She stayed on with us after graduating and her work ethic has always impressed us. She moved up quickly to chef de partie and then to junior sous chef. Her last year with us she was the sous chef at La Colombe.”

Sampson previously wanted to open her own bakery: “It sounded good at the time,” she recalls, “but every time I thought about leaving La Colombe, a new challenge would come up. So I stayed, learned more, and grew and grew.

“The funny thing was, I had a scholarship at Silwood and about two months before I got this… promotion… they did a video of me in which I said I wanted to be doing my own thing within a year. And this happened, and I was like ‘wow!’. When they told me, I thought they were joking,” she smiles.

Things happened fast – a 16-day trip to India for spice inspiration in September 2019 (“We ate a lot!” says Sampson) preceded the opening of Epice before the year was out. While she is firmly in charge of the restaurant, guiding it with a deft and sure hand, and a maturity that belies her tender age, Sampson is grateful to have Kirton and James Gaag (head chef at La Colombe) on hand to “tweak” her a little bit every now and then. “It’s really helpful,” she says.

Composed and confident, Sampson – who never dreamed she would ever do anything but pastry – slips into endearing girlishness when she shares a photo on her phone of the wedding cake she made for her brother the previous weekend. “I’ll show you, just because,” she says proudly as my heart melts.

Cape Town-born Sampson’s personal influences are Cape Malay. “In my family everyone makes a curry,” she says. Her use of spices – each dish highlighting a different one or more – is not about mouth-searing heat, not even close, but layers of flavours that roll over the palate in waves.

“Epice is all about a journey of spice,” says Kirton. “Over the years Charné showed a great interest in cooking with spices, so Epice was the perfect fit for her.”

It’s also a journey around the world, adds Sampson. “The tuna is Mexican in style, the oysters Asian, and the snoek and yellowtail curry is Cape Malay.”

The smallest restaurant in the group, seating 45 diners, Epice offers two set menus: a “reduced” spice journey at lunch time (which we had, with wine pairings), and a choice between this and an extended trip at dinner.

While each restaurant operates individually as part of the whole, once you have collected the whole set you’ll recognise certain trademarks which are present at all, not the least of which is the impeccable service and menu knowledge.

For example, the first course of amuse bouche-size nibbles which are brought to the table in a swirl of dry ice and surrounded by garden greenery. There are also courses finished and served table-side by different members of the kitchen team. This provides entertaining interaction and gives you a chance to ask questions.

Even after all these years of dining out, I found I had a few of my own. The first course comprises the aforementioned snoek and yellowtail curry, and granadilla, gin and passion berry – ice cream I guess you’d call it – cold and delicious, it was sucked up through a paper straw. But the replacement dish for the oyster had me flummoxed. I had no idea how to eat it. With a spoon? Slurped down like the oyster? When I picked it up I was no closer to the answer. Was I to eat the entire thing, or was this a serving receptacle?

Turns out, the little cup is a puri – or poori – which is of course entirely edible. It was filled with caponata (aubergine) and smoked tomato puree. It was heavenly, and this very first mouthful of complex flavours set the bar for the meal incredibly high. It was effortlessly maintained throughout.

The bread course is one finished at the table, and I made a complete fool of myself. In my defence, we’ve previously been served butter disguised as other things, at other restaurants in this very group, so forgive my trust issues. I also direct you to the sorbet course, a trolley filled with icy fruits crafted to look like orange segments, tiny green apples, and bright pink wedges of watermelon. It’s a delightful deception.

The bread was gluten-free for my friend, and it was light and fluffy. On our plates were garlic, and wild boar butter. I fixated on the garlic, believing it to be the butter. “What’s this?” I asked of the bright orange piped stuff studded with slivers of chorizo (made in-house from the entire ethically sourced beast) next to it. “That’s the wild boar butter, M’am,” was the reply.

All right then. Moving swiftly along. The next dish is the Mexican-inspired seared tuna with mango (fresh and grilled), avocado, mustard and cumin. Note: these are simplified menu descriptions; the explanations provided by the staff are far more detailed, and I won’t spoil the surprise for you. Also, I did not take notes. The tuna is served with Keermont Terrasse 2016 from Stellenbosch.

Next up is quail with yoghurt, ginger and masala, finished at the table with a prawn from the tandoori oven, championing the spices of Kerala in India. The wine is a delicate Catherine Marshall 2018 Pinot Noir from Elgin. 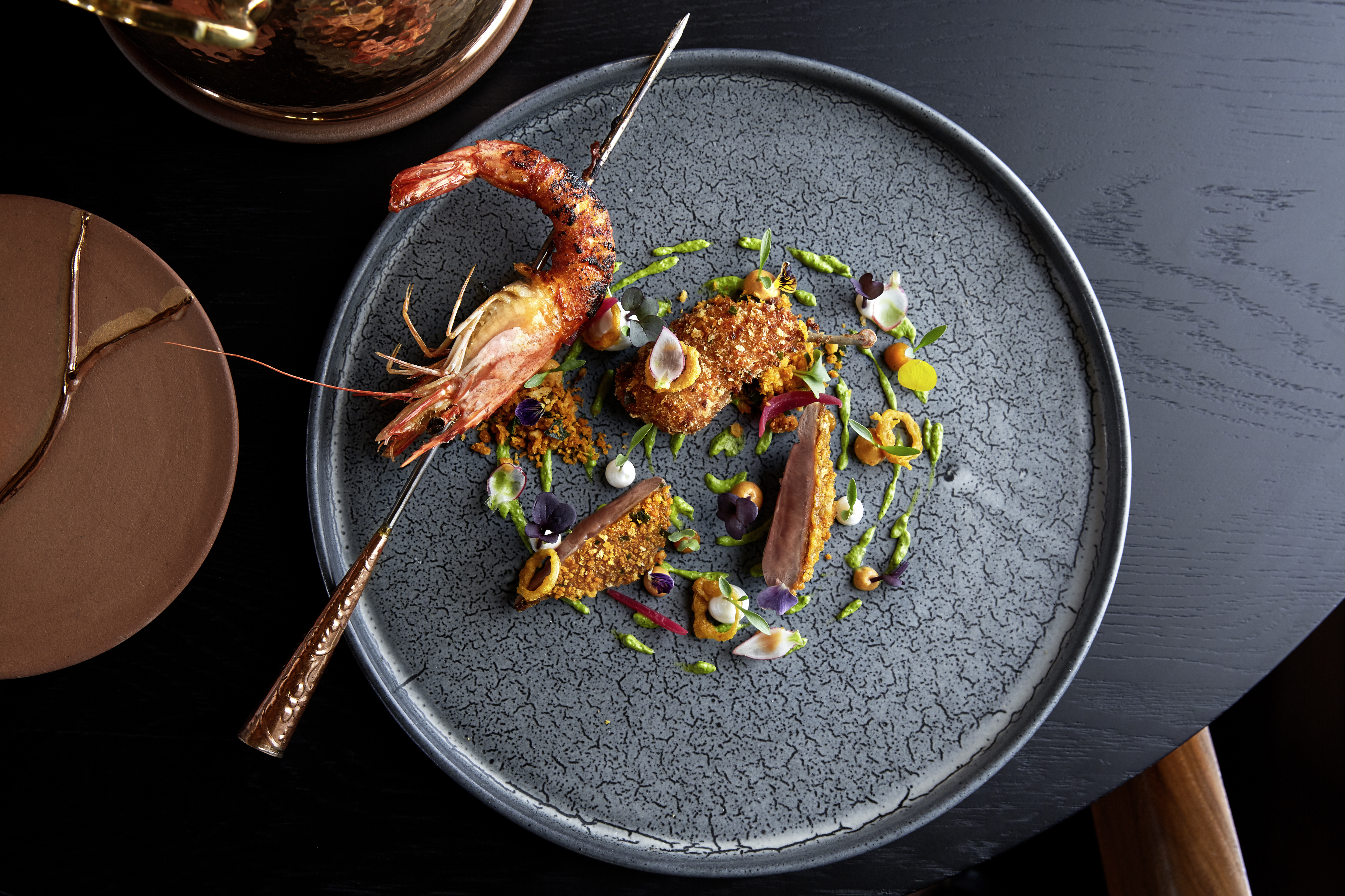 After the sorbet, I had grass-fed beef with carrot, spinach, nutmeg and pepper served with the exquisite Joubert-Tradouw red blend (2013) from the Barrydale region. Not a red meat eater, my friend got the sea bass as a substitute (part of the dinner menu), which had crispy golden skin and a bed of water chestnuts and a light curry sauce, complemented with squid and mussels and a glass of Klein Constantia 2015 Riesling.

For dessert, we were presented with gold-flecked bowls of sweet and exotic tropical elements and textures of coconut, litchi, pineapple and vanilla drizzled with rum caramel. The pairing with Thelema’s Late Harvest Semillon 2015 was in my opinion the best one of the meal, as the combination sang in my mouth.

To finish there’s a bit of light-hearted fun in the shape of The Spice Test – a selection of filled chocolates accompanied by a square of paper printed with the names of four spices: vanilla, star anise, cinnamon and cardamom, which you are invited to match with the correct chocolate. There is no truth to the rumour that if you get them all correct, your meal is free.

What a joy this flawless meal was, and I was pleased to have been caught out a few times. DM