Wealth and job creation — look no further than Spaza shops 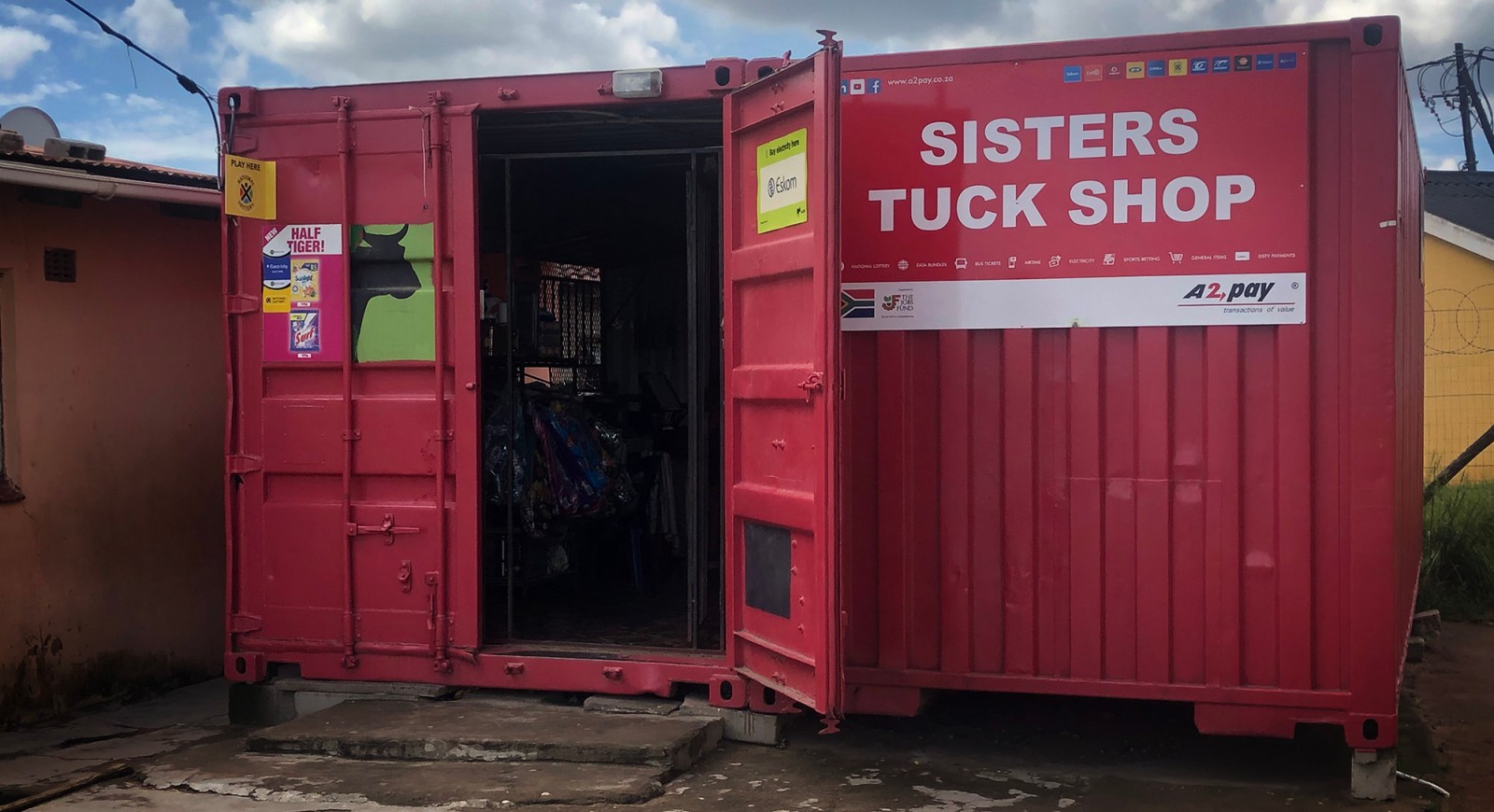 One of the All2Pay Spaza Shops in KwaMashu, KwaZulu-Natal. (Photo: Ruan Jooste)

Although co-operation is widely and successfully used by spaza shops owned and managed by foreign nationals, their SA counterparts have been lacking the same team spirit. But the merchants have finally come to realise that they all need to get in to win it.

Collective bargaining is a powerful weapon. It gives smaller enterprises the firing power to be price makers and not price takers, and the clout to bargain and compete with the high-volume, small-margin supermarket chains.

Spaza shops started in the homesteads of rural South Africa, where a handful of very basic goods would casually exchange hands between community members in passing or be handed over the neighbour’s fence. It was not a sophisticated operation or considered a money maker. It was just the only option available.

But the Spaza shopping sector has evolved into a booming business. It is estimated that over 150,000 spaza shops are in operation around the country and contribute close to R120-billion to the local economy. That is no small fry.

Research also shows that informal trade has the potential to create in the region of two million jobs. And with almost a third of the country’s citizens unemployed, that number stands significant.

But the traditional tuckshop has come under threat as outsider networks have entered their turf and started pricing them out of the market. Regulatory red tape has also become a barricade too big for these smaller businesses to make a breakthrough on their own.

Philani Masinga is a shopkeeper in KwaMashu in rural KwaZulu-Natal. He owns two spaza shops in the area and employs six people from the local neighbourhood to help out at his storefronts. Masingo belongs to a stokvel society of eight members who own 12 spaza shops among them and employ more than 20 people in the surrounding area.

But he says they are being forced out of business by local government who insist they should have business permits to operate in residential areas.

“Yet, nobody has come out to help us apply for them, or assist in other compliance measures,” he says. “We can’t even get the state to issue us the title deeds to our own homes from where we started our businesses in the first place,” he adds.

Government is an oppressor, rather than an enabler, he says.

“We don’t need more laws, we need assistance with complying with what is already in place, and be afforded a fair chance to participate in the economy. We can’t compete with the large shopping malls popping up all around us who can afford fancy lawyers or with foreign networks who are illegally setting up shops in our territories”.

He says it is impossible for them to access the superpowers’ supply chains without the proper paperwork or professional or political connections.

Local merchants say they hold no bargaining power in their own backyard, yet they are the business owners who employ residents and invest profits back into the community. “We also live here and need to support our households,” Masingo adds. “Closing the shop is not the only cost at play here.”

“We have been trying for too long to survive in isolation without access to bulk discounts available to the big retailers and the foreign nationals,” says Masinga. “And we have to operate in an over-regulated market that offers no protection, support or infrastructure,” he adds.

“Some Spaza shop owners may have insufficient bargaining power or business knowledge to effectively negotiate discounts, which puts them at a disadvantage,” she says. “They need the tools to be able to compete”.

“There has been little to no collaboration or communication between these businesses,” she says, “and they have rarely had opportunities to learn from or support each other”.”

It is precisely for these reasons that A2Pay with the backing of the SA SME Fund and support from the Government Jobs Funds has thrown its weight behind the spaza community.

A2Pay provides advanced vending solutions to empower and grow small to medium retailers. The fintech start-up has installed point-of-sale terminals, which were funded by the SME fund, in more than 1,500 Spaza Shops around the country, 400 of them being in KwaMashu. A2Pay was itself financed by the SME fund in its start-up fintech.

And this week a partnership agreement was signed with the SA SME Fund to finance a further 10,000 point-of-sale devices and related software for spaza shops across the country.

Point of sale terminals allows you to log transactions, to build up a tracking history. They can be relied upon to control stock better and manage payments to creditors and their employees, says Mason. They are able to measure their performance, control costs and make decisions for the future based on reliable data.

This terminal technology backs up all data to the cloud every 15 minutes and has a back-up power supply during times of load shedding, for example. So even if the terminal is stolen or the power goes out, the integrity of the data remains intact.

But most importantly, they have a track record of the business that they can present to financial institutions and other dealmakers to access financing and going into joint ventures, something that was not possible before. Many of these small businesses struggle to access banks, credit and business support and training and must compete against larger, more established businesses,” says Mason.

More importantly, the data generated by the A2Pay system is an excellent input into credit decisions and assists with identifying and mitigating repayment risk, she adds.

Masinga says he has accessed more R200,000 in capital via this initiative, which allowed him to open up his second shop and employ an additional three people. He now has six local residents on his payroll.

The Jobs Fund provided a grant initially (seven years ago) to purchase the digital retail equipment for the Spaza shops. The SA SME Fund funded an initial R5-million for the pilot project, and on Tuesday (February 11) signed an agreement for R25-million. This investment provides A2Pay with the ability to fill the much-needed access to the capital gap that exists in the market.

“We began this journey by implementing a pilot project which culminated in us disbursing R3-million in 78 capital loans to 48 spaza shop owners. The combination of the loans, technology, and training has resulted in a 25-30% sustained increase in their revenues, and some of the spaza shop owners have even opened up second stores,” Mason adds.

“Spaza shops are essential for job and wealth creation in this country. This partnership with corporate South Africa will also allow us to create over 40,000 jobs.”

But Masinga and his fellow business-minded shopkeepers who belong to a stokvel association are dreaming of bigger things. They want to establish a wholesale facility smack in the middle of the spaza circle of 45 shops in the area, that will allow for bulk purchases and storage right at the shopkeeper’s fingertips.

“Having our distribution centre in the township from where merchants can buy in bulk, and spaza shops benefit from that bargaining over; not to mention saving on transport costs.”

His words were not even cold when Ketso Gordhan, CEO of the SA SME Fund announced that the warehouse idea is not far off, adding that they want to roll out the pilot project in three months. An addendum to the agreement was assigned right then and there. And Masinga and his stokvel stakeholders are thrilled at the opportunity and have agreed to be involved.

An informal agreement has already been signed with the SA SME Fund Cape Town-based online shopping service Yebo Fresh, a start-up that was founded in 2019 by serial entrepreneur Jessica Boonstra.

The startup gathers orders throughout the week, orders in large batches and delivers once a week on Saturdays. This, Boonstra says, allows Yebo Fresh to save on fixed costs, optimise delivery routing and reduce stock levels and waste to a minimum.

She says Yebo Fresh’s experience and established infrastructure will make it an easy win to do the same KwaMashu.

Involved parties see great potential for growth in the Spaza space and many opportunities for job-creating in the supply chains and networks that will be established as the eco-system evolves over time.

Spaza shops will remain appealing due to its proximity and flexibility in pricing and packaged goods. For residents, these outlets are conveniently situated on commuting routes and close to shoppers’ homes. They open early and stay open late. These businesses provide vital goods and services to informal settlement residents, as well as stimulate economic growth by circulating money within the community. But most importantly, to be a creator of jobs in communities that need it the most. BM