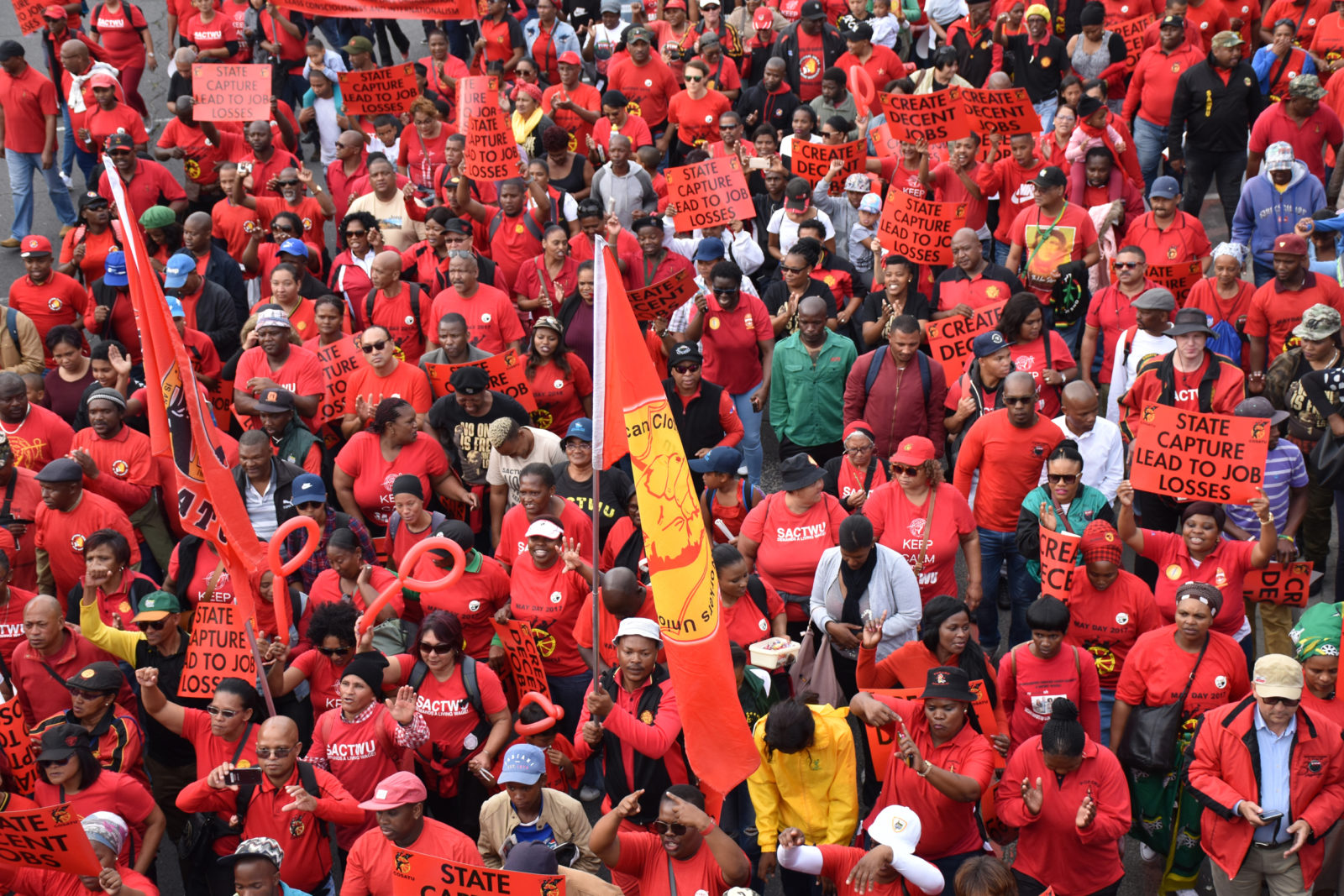 Photo: Protesters take to the streets in support of COSATU at a rally in Cape Town on 1 May, 2018. All Photos: Adam Yates

Cosatu is happy to hear that the government remains committed to implementing the resolution of the establishment of a State Bank. The government cannot outsource its developmental agenda to the private sector and a state bank will form the foundation of a developmental state.

The Congress of South African Trade Unions notes the State of the Nation Address delivered by the President Cyril Ramaphosa. The Speech succeeded in identifying the bottlenecks that have led to economic stagnation and has managed to focus on some of the solutions that have been proposed by the ANC Manifesto. We expect more details from the relevant departments during their budget votes and National Treasury to speak to what the SONA has committed to.

Cosatu appreciates the fact that 2020 SONA has acknowledged the fact that the public debt has exploded and is starting to haunt the South African population. The purchasing power of the working class has been shrinking because the working-class incomes are falling, and jobs continue to be lost. The current slowdown in the South African economy is indeed partly to corruption but also to a large extent, as a result of mismanagement of the economy by the policymakers and decision-makers who have only focused on the failed neoliberal policies.

We are happy to hear that the international investment drive has managed to attract investment commitments to the tune R 664-billion in many sectors of the economy. We still insist though that while FDI is welcomed it is not the solution to everything.

The over-reliance on the private sector investment has left the economy vulnerable to the irrationalities of investor confidence. A situation where the state plays an increasing role in the investment process is warranted, especially given the massive socio-economic challenges and household vulnerabilities that we face.

We welcome the progress that has been made to ensuring that registering a company can take place in one day in the country. We still believe that the government needs to do more to pay the service providers on time, especially small businesses that are struggling because the government fails to pay them for their services on time.

We support the idea that government departments will be forced to spend 1% of their budgets on employment creation targeting young people. This is long overdue and it represents the business unusual that we have been talking about.

A state bank will offer competition to the existing banking system and could be a way to help expose customer abuses and the gouging that is prevalent in these big private banks. It will offer a transparent alternative to private banks like ABSA and Standard Bank who have been involved in currency manipulation and other reprehensible activities.

The bank will also not only protect consumers but will also implement a sound monetary policy. It will offer lower debt costs to municipalities and provinces, fund public infrastructure projects, and encourage entrepreneurship by providing loans to small businesses at lower interest rates and with lower fees. These provinces and municipalities can use the money to build more public housing and support the development of greener energy infrastructure that the country desperately needs.

We welcome the president’s commitment to ensuring that government plays a crucial role in working with social partners to achieve a social compact that will develop solid strategies and a coherent plan to fix the power utility Eskom.

We welcome the investment of R1.4-billion in modernising the Prasa rail network. This is crucial and we hope that the government can expand this investment and not just focus on rebuilding the old infrastructure but also roll out new rail network that will connect many new locations that are currently disconnected from the rail network.

We are worried, though, by the scant details from the SONA on how government plans to restructure and rationalise the SOEs, especially because this is an urgent matter that cannot be postponed. We hope that the president and his Presidential SOE Council will release the details soon so that stakeholders can engage and submit their inputs. The restructuring of the entire public sector needs to happen and happen fast because the weak capacity of the state is making it difficult for it to drive its developmental agenda and deliver much-needed services to the people.

We welcome the government’s commitment to wage an unremitting war against the scourge of gender-based violence and corruption. The fight against criminal gangs is a fight that the government cannot lose. The opening of the Crime Detection School will go a long way toward building the capacity of law-enforcement agencies.

The federation is happy that the government has committed itself to work with the Auditor-General to reduce irregular expenditure in government and stop the haemorrhaging of resources that is compromising service delivery and bleeding the fiscus. We welcome the announcement by the president that the PIC Commission of Inquiry Report will be released to the public and action will be taken to implement its recommendations.

South Africa still does not have a sufficient number of highly skilled people in most professions and this demands that solid action be taken to improve access to quality education.

We are happy that more TVET Colleges are being built all across the country and that the government is spending over R64-billion in student accommodation. We welcome the planned Science University at Ekurhuleni. Infrastructure spending in schools needs to speak to the enormity of the challenges facing the education system.

We are worried, though, that the SONA did not give a detailed plan on addressing the pervasive lack of safety in South African schools. The violence in schools has reached crisis levels.

Last, we are disappointed that the president has failed to mention the e-tolls. We need to put this matter to bed because it continues to be a contentious policy issue. DM