While SA remembers Madiba, Rivonia trialist warns of a country in ‘crisis’ 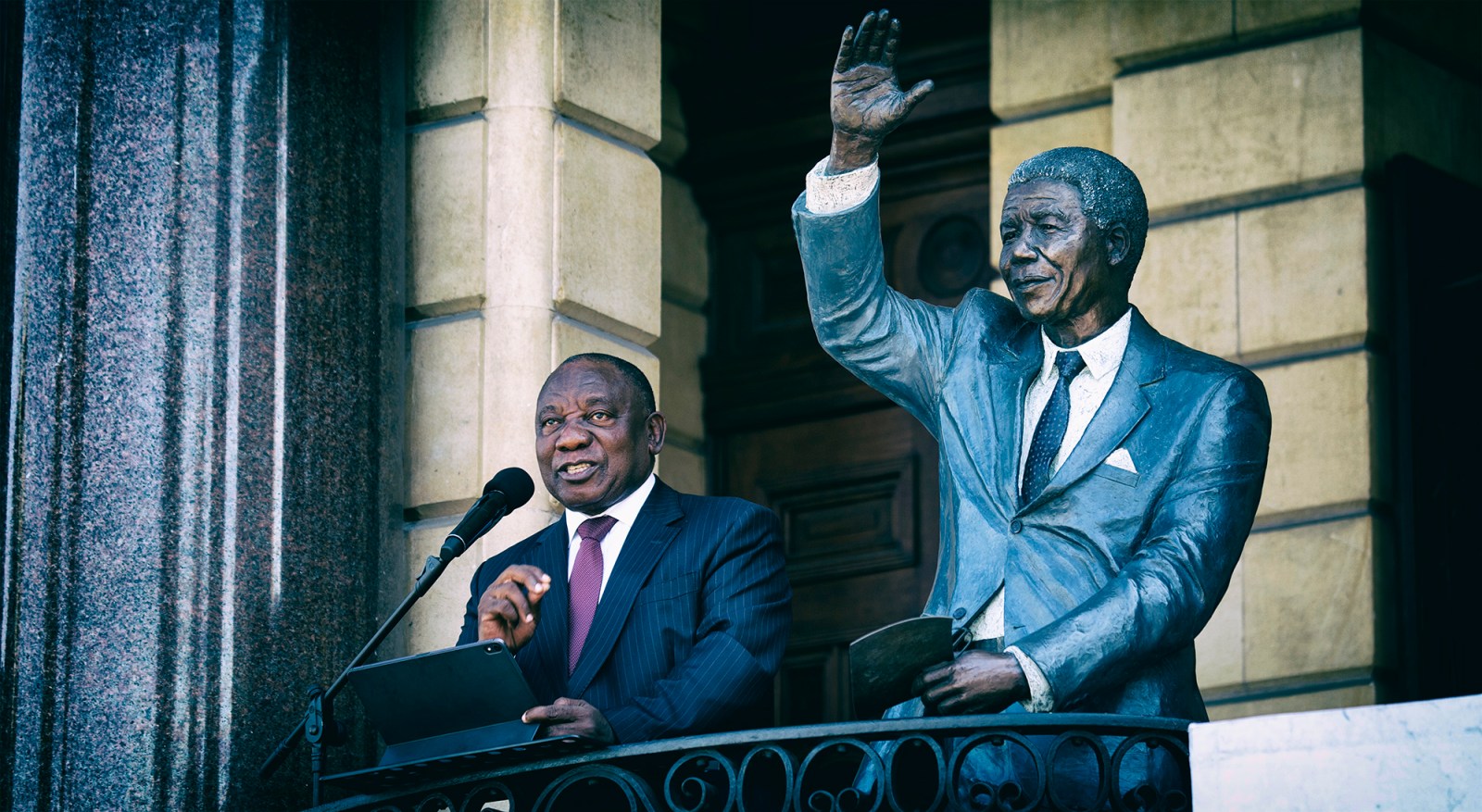 President Cyril Ramaphosa honours the 30th anniversary of Nelson Mandela's release from Victor Verster Prison with a speech at the City Hall in Cape Town 11 February 2020. Mandela delivered his first speech from the balcony of the Cape Town City Hall to thousands of people on the Grand Parade on 11 February 1990. (Photo: Leila Dougan)

Thirty years after Nelson Mandela was released from Victor Verster prison to address crowds at Cape Town’s Grand Parade, President Cyril Ramaphosa addressed a special anniversary event at the same location. Among the gathered dignitaries was Mandela’s fellow Rivonia trialist Denis Goldberg, who believes that this is an especially fraught moment for South Africa.

Three decades after Nelson Mandela made his first public appearance as a free man at Cape Town’s Grand Parade, one of the comrades sentenced alongside Mandela at the Rivonia Trial pointed at the steps outside City Hall from his wheelchair.

“Nelson made his speech on that balcony, and he thanked the people of South Africa for setting him free. He did not thank the government,” 86-year-old Denis Goldberg told Daily Maverick.

“We were in crisis then, and we are in crisis now. And only the people can get it right.”

Goldberg’s words summed up a bitter-sweet atmosphere on the 30th anniversary of Mandela’s release from Victor Verster prison: one in which the freedom of Mandela was remembered as a time of extraordinary hope and joy, but tempered by the reality of the scale of the challenges facing South Africa today.

Some of the well-known faces present at Tuesday’s commemorative event had played significant roles on the occasion 30 years earlier when crowds had thronged the streets of Cape Town to catch a glimpse of the most famous political prisoner in the world. Sitting front row in the VIP tent was former minister Trevor Manuel, who was part of the team entrusted with ensuring that Mandela made the journey safely from his Paarl prison to the Grand Parade.

In 1990, a bearded trade unionist had held the microphone used by Mandela to make his first speech. Three decades later, the same man addressed the audience as the president of South Africa.

“You swelled the streets in front of City Hall, wearing ANC flags. You chanted: The ANC lives, the ANC leads,” remembered Cyril Ramaphosa.

“There was simply magic in the air.”

But in 2020, the same optimistic spirit seems hard to recover. This week, President Ramaphosa will deliver his State of the Nation Address (SONA) in Parliament, a stone’s throw from the Grand Parade. He acknowledged that expectations have never been higher.

“We are indeed at a decisive moment,” Ramaphosa said.

A precarious economy, rampant unemployment, social ills and corruption have contributed to “a trust deficit with our citizens which threatens to reverse our democratic gains”, said the president.

“There is much we can be less proud of.”

Ramaphosa deplored the fact that millions of South Africans continue to live in poverty, but also criticised the “mindset that it’s better to be at home unemployed” rather than out in communities trying to make a difference. He also condemned the burning of schools and other vital government facilities as a “misguided form of protest” against poor service delivery.

“Let us ensure that the land reform process becomes a reality and that land be returned to the rightful owners,” said Ramaphosa, earning one of the more enthusiastic responses of the day from his audience.

The president faced a tough crowd, composed mainly of school children who had been baking for hours in 32-degree heat waiting for the event to begin. It was a far cry from the thousands of passionate supporters who had packed the Grand Parade in 1990.

“Let us seize the moment for healing and rejuvenation,” said Ramaphosa.

“Let us try to ensure that the vision [Mandela] had is fulfilled.”

Taking the microphone before Ramaphosa was one of his predecessors, former president Kgalema Motlanthe, who described a nation where “doubt and despair” is currently flourishing and where the “dividend of our democracy” has yet to reach many.

“How do we make the South Africa of Madiba’s dreams?” asked Motlanthe.

Through sincere dialogue, suggested the former president; through cultivating a mindset of activism; and through walking the talk.

“We are thankful we have Cyril Ramaphosa” to tackle the job, Motlanthe added.

The speeches at the Grand Parade formed one of three commemorative events organised by the Nelson Mandela Foundation to honour the 30th anniversary of Mandela’s release. Earlier on Tuesday, a packed room at City Hall played host to a panel discussion featuring Ghanaian Nobel Peace Laureate Leymah Gbowee and co-founder of the Black Lives Matter movement Opal Tometi.

Gbowee suggested that one of the key lessons of Mandela’s life was the need to treat others with respect and humanity. She, like Motlanthe, advised South Africa to embrace candid dialogue.

“In many places, truth is no longer part of our national language. You did TRC [Truth & Reconciliation Commission], but truth did not come.”

For his part, President Ramaphosa vowed on Tuesday that the SONA he is due to deliver 48 hours’ hence will be one of harsh truths.

“We will talk frankly about how we can chart a new path,” Ramaphosa said.

As he spoke, school children fanned themselves with flyers distributed by activists before the event. The flyers were advertising a public rally to be held in Cape Town the day before SONA.

“State capture culprits must be jailed,” they stated.

“Join us as we call on our government to make 2020 the year of the orange overalls.” DM