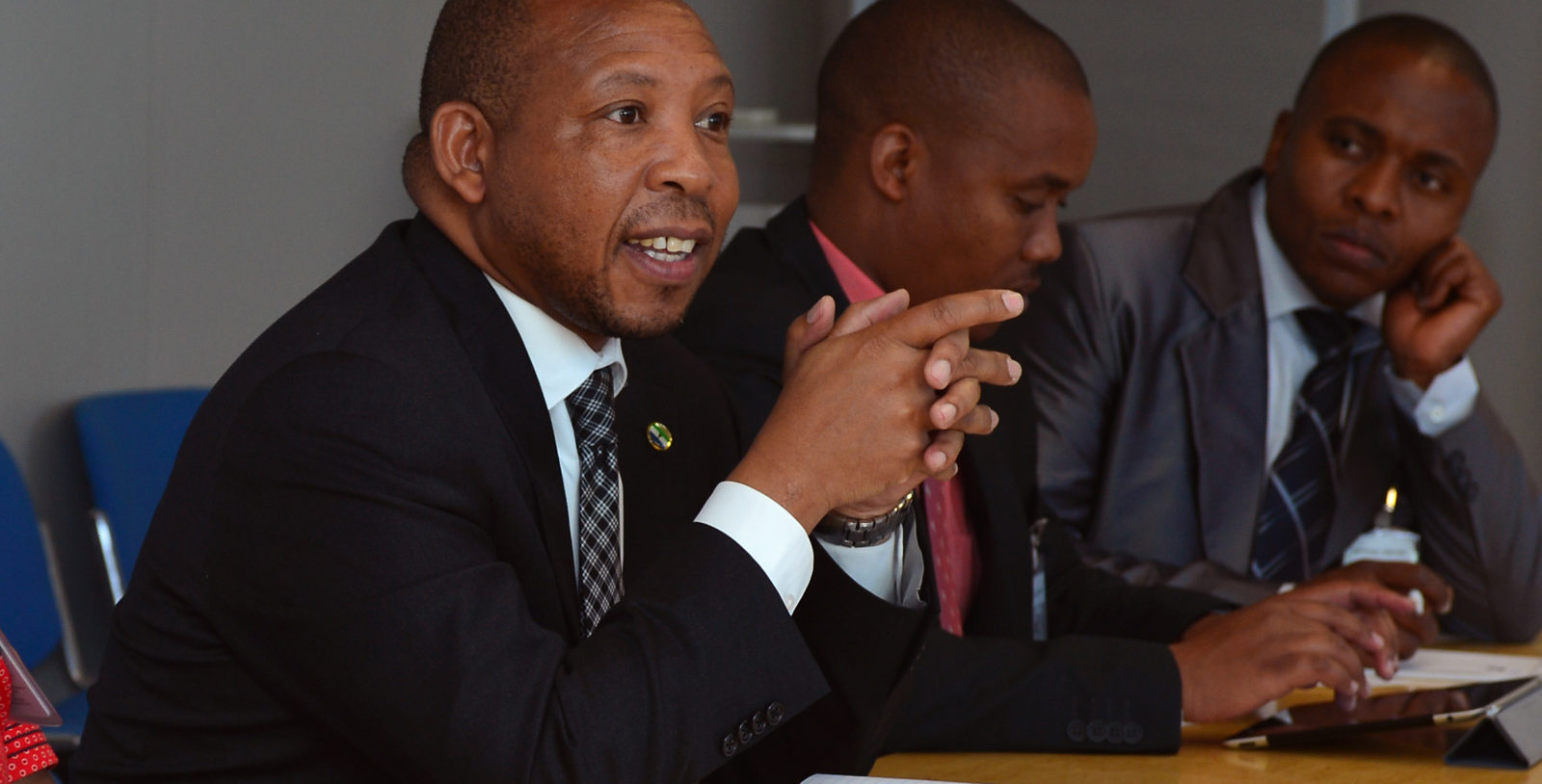 File Photo of Moeketsi Majoro, then Minister of Development Planning, Kingdom of Lesotho during a meeting with Senior Officials of the IAEA during the Minister's visit to the IAEA headquarters in Vienna, Austria. (Photo Credit: Dean Calma / IAEA)

The controversial development was to be funded by a small South African developer, Property 2000, based on Lesotho government loan guarantees valued at M2.45-billion.

The Lesotho ministry of finance has cancelled government guarantees securing M2.45-billion (Lesotho’s currency, the maLoti is on par with the rand), in loans from a little-known South African company, Property 2000.

The loans were to be issued for the construction of a stadium, an indoor sports arena and an athletes village as Lesotho prepares to host the African Union Sports Council Games in December 2020.

The cancellation follows widespread Lesotho media coverage of a finance ministry document from August 2019 recommending that the deal should not be signed because of “irregularities”.

The controversial development was to be funded by a small South African developer, Property 2000, based on Lesotho government loan guarantees valued at M2.45-billion.

Now, in the wake of questions from MNN Centre for Investigative Journalism about Property 2000 (see “Grissag behind Lesotho’s M2.4-billion loan guarantee rumpus”), and about the political connections of some of the construction consortia (see “Questions over contractors in Lesotho’s R2.4-billion stadium deal”), the finance ministry has revealed that it cancelled the guarantees.

This came after Property 2000 missed a key deadline by failing to provide funds within 21 days as agreed.

MNN has learnt the guarantees were already cancelled when Property 2000 director Napo Modise told us in an earlier interview that he was still expecting the government to issue the guarantees for him to start releasing funds to the contractors.

But Lesotho director of public debt management Khotso Moleleki told MNN in an exclusive interview there was no chance of this. “Mr Modise is still holding on to the cancelled guarantees notwithstanding our request that he should return them to the ministry. He keeps calling me and complaining, but the decision has been made. Our deal is dead,” Moleleki said.

According to Moleleki, the finance ministry advised the ministry of sports from the onset that it could not be talking about a project of M2.45-billion without a feasibility study.

But he said the sports ministry, together with a cabinet sub-committee entrusted with overseeing the project, were very stubborn. “They were only eyeing the ‘benefits’ and not bothered about the underlying risks,” he added.

“This committee exerted a lot of pressure on us for this project to be done.”

Sports Minister Mahali Phamotse apparently remains adamant that the project should continue. In a separate interview, she said she wanted the stadiums to be constructed and did not care where the money was coming from (see “Questions over contractors in Lesotho’s R2.4-billion stadium deal”).

Moleleki said having discovered that Property 2000 was behind the funding of the project, his office summoned Modise, the Property 2000 director, and started vetting the company.

“First was to have a look into its finances and similar previous projects to ascertain that it was capable. But all the time, we got sweeping statements,” he said, adding even the company’s website was not well developed.

Moleleki said Modise talked about projects in Malawi, DRC and Ethiopia, “but all the information was sketchy and no successfully funded projects could be traced”.

“They failed to give sources of their income, or even to prove their capacity. For them everything was confidential and as the ministry, we were aware that at some point we would have to prove that the company was selling a lie.

“As finance, we became fully aware that Property 2000 did not have the funds. Unfortunately, the ministers didn’t understand these dynamics, with some believing we are all out to obstruct development and they kept piling more pressure on us to give it a green light.

“It was because of that pressure that we, through the minister of finance, ended doing a cabinet memo of 9 September 2019. Our memos to the cabinet normally seek solutions, this one was extraordinary, raising a myriad red flags, but it got cabinet approval.

“Our legal department then drew [up] the guarantees for the three companies. The guarantees were finalised on 11 October 2019, given to the companies and copied to Property 2000,” he said.

However, a few days after the guarantees were issued, Moleleki said they saw Property 2000’s true colours. He said the company then demanded another guarantee be issued to a South African bank.

A letter from the bank, forwarded by Modise on 22 October 2019,  said that before it could “advise on the viability”, of the transaction … [the bank] must receive a … guarantee from a bank in Lesotho, which we have to authenticate.

“The guarantee must be irrevocable, transferable and negotiable,” the letter stated.

“These terms meant the same money could be accessed by Property 2000 to reinvest in Lesotho. Or we could find a claim by someone from Russia, or America. In the worst case, Property 2000 could take that guarantee and use it to source funds against the government of Lesotho,” Moleleki argued.

“The sub-committee wanted us to instruct the central bank to issue the guarantee, but we warned that the move would render the government vulnerable to vultures we don’t know. Another question was: if we had the M2.45-billlion to put aside as a guarantee, why should we go to Property 2000 for funding?”

Moleleki said they waited for the lapse of the 21-day deadline provided in the guarantees for Property 2000 to deliver “and we cancelled the guarantees on 15 November 2019”.

MNN has seen the letter cancelling the guarantee and Modise’s response, in which he pleads with the ministry to give him more time for negotiation.

Efforts to revive the deal

The MNN has learnt that the sports ministry sought the intervention of parliament’s social cluster committee on the impasse, while accusing the ministry of finance of not helping to secure funds.

Moleleki said the minister of finance was called before the committee. “I am told it was a very heated meeting, but no conclusion was reached. I will hopefully be part of the next sitting.

“As finance, we no longer trust the ministry of sports because we have learnt they cannot tell us the truth,” he said.

“We asked about the cost of not hosting these games, we needed a budget for renovation of existing stadiums. They did not give us anything. Surprisingly, they are hell-bent on this risky project and telling flowery stories.” DM

*MNN Centre for Investigative Journalism (MNNCIJ) produced this story. All views are ours. See www.lescij.org for our stories, activities and funding sources.

The amaBhungane Centre for Investigative Journalism, an independent non-profit, provided this story. Like  it? Be an  amaB  Supporter to  help us do more. Sign up for our newsletter to get more.