Thousands of ‘crisis pregnancy centres’ worldwide affiliated to conservative American Christian organisations are using fear and misinformation to persuade women not to have abortions. The local chapter of an international investigation by journalists reveals that these centres have their tentacles firmly in South Africa. This report is part of a global investigation by openDemocracy.

Vulnerable women are being fed misinformation at US-backed “crisis pregnancy centres” across the world, prompting a top South African health official to vow that he will act against centres that are breaking the law.

Supported by powerful US Christian fundamentalist lobbyists who claim close links to the Trump White House and often styled like health clinics, these centres appear to offer pregnant women unbiased “advice”. But an 18-country investigation by openDemocracy found that staff in many centres try to dissuade women from having legal abortions, and in some cases, even from accessing contraception.

Crossroads Pregnancy Help Centre in Pretoria says it offers women facing unplanned pregnancies “counselling in a safe environment with accurate information about all options available for you to make an informed decision”.

However, an undercover reporter posing as an unemployed woman seeking an abortion was told by centre staff that “abortion is murder”; she could be “killing a future president” and she would “always be haunted by her choice”.

At the Seasons Pregnancy Centre inside Stellenbosch Regional Hospital 1,400km away, another undercover reporter was warned that she could face “post-abortion syndrome” involving “depression and nightmares”. A range of reputable research has debunked the existence of such a syndrome.

Seasons and Crossroads are among 50 South African “crisis pregnancy centres” affiliated with Heartbeat International, a US Christian conservative organisation created almost 50 years ago as part of the backlash against abortion rights in the US.

Today, openDemocracy’s investigation reveals how Heartbeat has funded and trained organisations globally. In Heartbeat-affiliated centres across the world, reporters were fed inaccurate and misleading information, including false claims that abortion increases women’s risks of getting cancer; that a woman needs consent from a partner to access a termination; and that hospitals will refuse to treat women for serious medical complications arising from abortions.

Heartbeat’s training materials also show how they’ve taught staff at some of these centres to encourage women to delay abortion and emergency contraception; to claim that condoms don’t work; and to say that abortion increases risk of abuse of other children and could “turn” partners gay.

Responding to openDemocracy’s questions, Heartbeat said “we stand firmly by our Commitment of Care” – a standards document that commits affiliates to accuracy in their information and advertising – “and by all our training resources designed for the pregnancy help community”.

“Different countries have their cultures and varied ways of communicating, the fact remains that abortion carries risks to women”, Heartbeat added. “With love and truth, our goal is to help the client understand abortion more fully, so that she can truly make an informed decision.”

‘Tacit approval’ for breaking the law

In South Africa, the 1996 Choice on Termination of Pregnancy Act clearly stipulates that counselling of pregnant women must be “non-directive”. This means that counsellors cannot push women to make certain decisions.

“By offering directive counselling, they are violating the law and the national guidelines and we will take action,” says Dr Yogan Pillay, the deputy director-general at the Department of Health, responsible for maternal, child and women’s health.

“The difficulty is always getting the evidence of centres breaking the law,” he added. “But members of the public should report the illegal actions of these centres to the department, including you, based on this investigation. We will then be able to write to these centres and remind them of the Choice on Termination of Pregnancy Act and the guidelines and ask them why they are breaking the law. If any registered health professionals are involved, we can also report them to their professional bodies.”

Pillay expressed particular concern about the possibility that untrained “lay people” are conducting ultrasounds on pregnant women at some centres. “This is not acceptable. Even nurses cannot do ultrasounds unless they have been specifically trained.”

But Marion Stevens, director of the Sexual and Reproductive Justice Coalition, a network of civil society organisations in South Africa, was sceptical about whether the government would take action.

“I remember giving a briefing on crisis pregnancy centres to Parliament in 1995,” says Stevens. “Twenty-five years later, they are flourishing in South Africa. Their counselling continues to be directive, they have a clear anti-abortion agenda and are well known. I am concerned that the Department of Health tacitly approves of their services by not ensuring that the services they provide are consistent with our law.”

Most of the South African centres are part of the Africa Cares for Life (ACFL) network, which is one of Heartbeat International’s nine key international partners. It has also received more than $200,000 in grants from the US group since 2007. 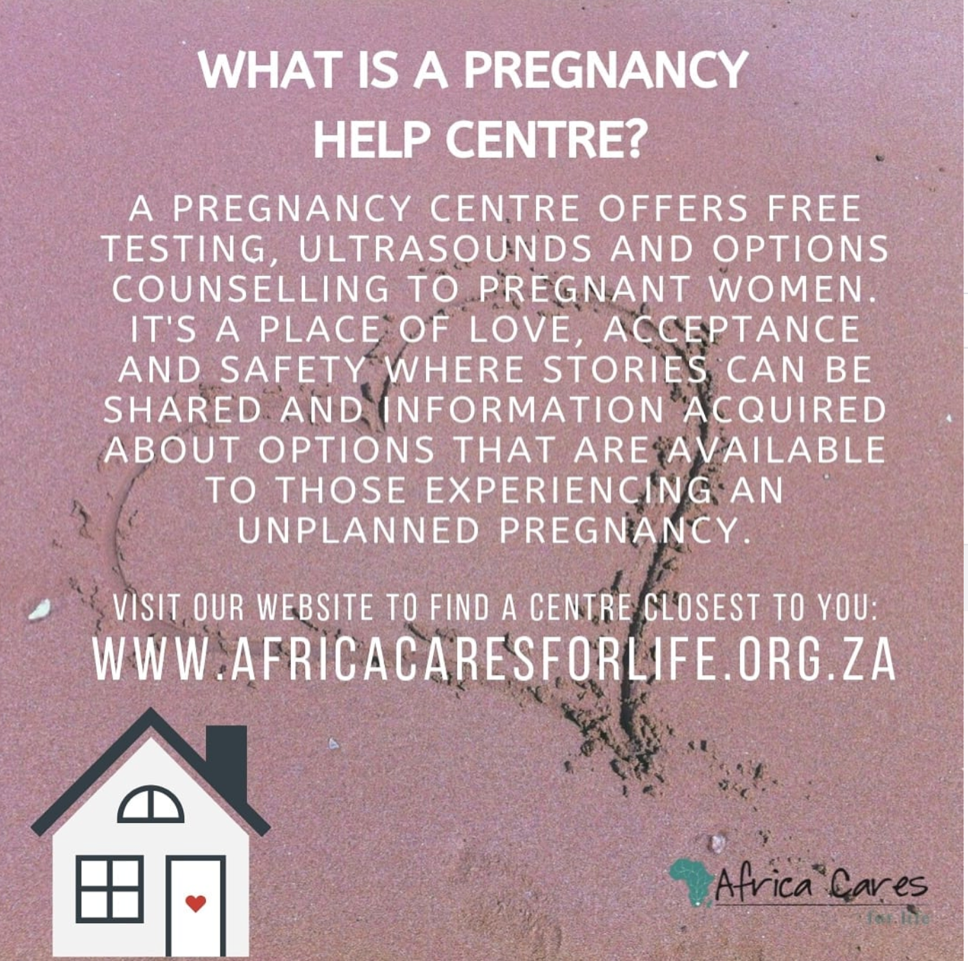 ACFL executive director Daniele Gradwell confirmed that Heartbeat was one of ACFL’s donors. ACFL currently has 77 “pregnancy help centres” in South Africa and intends to establish one in every town in the country, ideally all equipped with ultrasound machines, Gradwell told openDemocracy.

She describes the network as “life-affirming” rather than anti-abortion, and said that its centres offer “non-biased, non-manipulative advice”.

“All our counsellors are trained not to coerce a client but get them to reach a decision that they can live with,” says Gradwell, who claims the network reached 31,000 women between January and October 2019.

Gradwell added that “pregnancy centre volunteers are trained to perform ultrasounds on pregnant women” but that these “are not used to diagnose but rather to offer a window to the womb”.

Abortion is illegal or heavily restricted in most of Africa, which is also the region with the highest death rate from unsafe abortions in the world. At least 16,000 women died from these in 2014, according to research from the Guttmacher Institute.

Last year the World Health Organisation estimated that three-quarters of abortions in Africa are unsafe and are responsible for up to 13% of maternal deaths, while seven million women are hospitalised globally every year for complications from unsafe abortions.

In Uganda, abortion is illegal unless the woman’s life is at risk, but contraception is actively provided by the government. Yet when an undercover reporter called a pregnancy crisis centre, Alma Family Centre, she was told that emergency contraception is “early abortion.”

This reporter visited another centre, Comforters Life Choices, and was told that if she attempted an abortion, health facilities would not treat her for any serious complications that might arise, which is untrue.

Another Ugandan reporter, posing as a 15-year-old who had been raped by her uncle, visited the pregnancy centre at Wakisa Ministries and was told she “consented somehow”. She was urged to carry the pregnancy to term and advised against future contraception, because “you don’t know what you’re putting in your body.” All three Ugandan centres are affiliates of Heartbeat International.

In Nigeria, openDemocracy’s reporter was interrogated about who had impregnated her and one centre offered to pay for her hospital fees if she gave birth.

Although abortion is legal in South Africa, the procedure is available at less than 7% of public health facilities (264 out of 3,880), according to a 2017 report from Amnesty International. This is mainly because many health workers refuse to perform abortions.

Dr Jane Harries from the Women’s Health Research Unit in the School of Public Health at the University of Cape Town is an expert on abortion in the public health sector.

“South Africa has the highest rate of second-trimester abortions in the world, with over 20% of abortions taking place in the second trimester. This indicates a problem of access,” says Harries. “Women need to be seen as soon as possible. There is a need for early access to abortion but the Department of Health has struggled to roll it out.

“We have been saying for years that there are a lot of the same judgmental attitudes you will find in a crisis pregnancy centre in the public health sector, and this needs to be addressed,” adds Harries.

By using guilt and shame to coerce young women to continue pregnancies and give birth, these centres are “placing undue burden on poor women”, says Stevens. “It is no wonder we see so many women arrested for late procurement of illegal abortions.”

Professor Eddie Mhlanga, an obstetrician-gynaecologist in the Mpumalanga Department of Health, was one of the architects of South Africa’s Choice on Termination of Pregnancy Act, which legalised abortion in 1996 and he trains health workers on how to perform abortions.

“The tactic of actively persuading a woman not to terminate her pregnancy, irrespective of her personal circumstances, is not acceptable,” says Mhlanga, who is also co-leader of Global Doctors for Choice.

“In some cases it is simply not possible for a woman to give birth. It is not God’s will that a woman gets raped and then has to give birth – not the will of the God that I serve,” said Mhlanga.

“This kind of counselling is causing guilt that is harming women’s mental health. Women should be supported to make this decision, not coerced, intimidated, judged or threatened.”

But Mhlanga, a veteran pro-choice activist, is also not surprised by the growing influence of US evangelical organisations in South Africa.

“South Africa is increasingly in the clutches of the US right-wing fundamentalists,” says Mhlanga.

While Crossroads acknowledged that it was part of ACFL, it insisted it would only answer questions related to its counselling methods in a face-to-face meeting. Seasons did not respond to questions.

However, Sandra Maritz, spokesperson for the Western Cape Health Department, said that Stellenbosch Hospital offered “termination of pregnancy services” and that there was “no relationship” between the hospital or the department and Seasons.

Seasons had an office in the hospital’s administration block because an NGO that rendered mental health services in the area was sharing its space with Seasons, explained Maritz.

“We will engage the service provider on the alleged advice given [by Seasons to clients] to determine the way forward,” said Maritz. MC