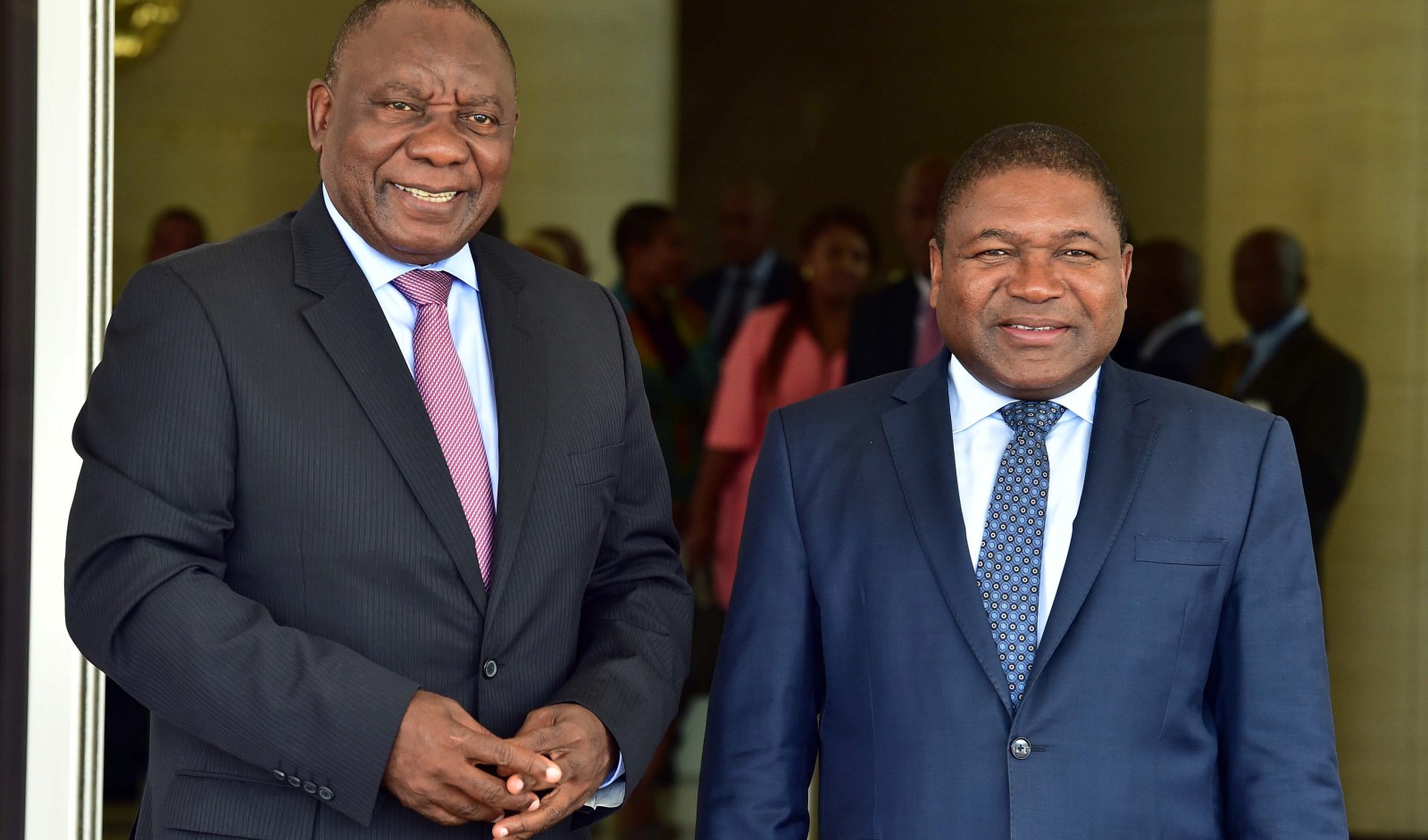 President Cyril Ramaphosa and members of his delegation meeting with his counterpart President Filipe Nyusi of the Republic of Mozambique to discuss bilateral, regional and global issues of mutual interest. 14/01/19, Elmond Jiyane, GCIS (flickr)

The African Union is, at last, sitting up and taking official notice of the growing and brutal jihadist insurgency in Mozambique’s northernmost province of Cabo Delgado.

At the AU summit taking place in Addis Ababa, the AU peace and security commissioner Smail Chergui said on Monday that the AU should be helping Mozambique by providing equipment and training and also help them address the problem holistically.

“We have to understand why this terrorism is happening there and why there has been such an unprecedented level of violence against civilians,” he said, referring to the extreme brutality of the attacks by the jihadist group generally called Al-Sunnah wa Jamaah (ASWJ) though some locals also call it Al-Shabaab. Islamic State has claimed that the local group is an affiliate of its IS Central Africa Province which in turn falls under its Somalia division.

Since erupting in October 2017, the ASWJ jihadists have conducted scores of attacks and killed as many as 600 civilians and security personnel, usually beheading and otherwise maiming and dismembering its captives.

Mozambican President Filipe Nyusi also seems to be paying more attention to the ASWJ insurgency. He skipped the AU summit – where South African President Cyril Ramaphosa took over the AU chair – and instead visited Cabo Delgado on Monday. This prompted speculation that he had missed the summit because of the urgency of the threat in Cabo Delgado, although some sources also note that there are other security problems in the north, including the rebellion by Renamo Junta, a dissident militant faction of the main opposition party Renamo.

Nyusi’s office announced only that he would hold a special session of the Council of Ministers with local government officials and would also meet with different interest groups and the local population. However local security experts say they have heard the primary purpose of Nyusi’s visit was to address the insurgency and that he had personally taken responsibility for it, because of an inexperienced minister of defence and new minister of the interior (who is in charge of policy).

“It’s good that we are all together with Mozambique to address, confine and degrade this phenomenon very quickly. There will be a permanent exchange of information with the Mozambique authorities. We hope that very soon stability and security in that part of Mozambique — which has implications on the Tanzanian border — will be totally under control.”

The new attention to Mozambique is happening as the AU steps up its efforts to address conflicts across the continent, in keeping with its theme for 2020, which is “Silencing the Guns”. That motto was penned some time ago and originally included “by 2020”. But that deadline has faded as it is clearly impossible to meet in less than 11 months. Yet still, the objective of ending conflict remains urgent and Ramaphosa stressed that it would be one of his main priorities.

The AU is making a much greater effort than before to play a significant role in the efforts to end the persistent civil war in Libya, which has dragged on for nearly nine years since dictator Muammar Gaddafi was overthrown and killed. So far the United Nations as well as external powers have made the running in the peace efforts. The AU heads of state and government on Monday decided on several steps to increase their involvement in Libyan peace efforts.

Chergui announced that he and the chairperson of the AU’s High-Level Committee on Libya, Republic of Congo President Denis Sassou-Nguesso, UN Secretary-General Antonio Guterres and AU Commission chairperson Moussa Faki Mahamet had met before the summit and had agreed on greater co-operation between the AU and UN. He also said the AU would move the AU’s Libya peacemaking operation from Tunis to Tripoli.

The UN had agreed to support a conference of all the Libyan stakeholders, which the AU proposed to hold.

Chergui said the AU welcomed the recent meeting, which Germany convened, in Berlin, of Libya stakeholders and wanted to work with others in implementing its agreements. He said he would attend a follow-up meeting in Germany on 16 February.

However, by late Monday night, the AU heads of state and government were still deliberating over recommendations from the AU Peace and Security Council for some tougher measures on Libya. The council had decided that after the Libyan warring factions officially signed a cessation of hostilities, the AU would join the UN in sending a pre-deployment mission to Libya to evaluate what was necessary to ensure the cessation of hostilities was observed and the UN arms embargo was strictly respected.

The AU would then send a mission of observers to monitor the ceasefire. Though he did not say in the press conference that the AU observers would be soldiers, he told journalists earlier that the idea was that this would be a military observer mission.

The AU Peace and Security Council also proposed stronger measures on dealing with the scourge of terrorism in the Sahel than the leaders were prepared to endorse. Chergui said the council had recommended a wider AU military force to bolster the G5 Sahel countries – Burkina Faso, Chad, Mali, Mauritania and Niger — which are battling to defeat very aggressive jihadist forces in their region, including AQIM, MUJWA, Al-Mourabitoun and Boko Haram.

This idea sprang from the complaints of the G5 leaders at the Peace and Security Council meeting on Saturday that they badly needed wider support from the continent in this war. But some insiders said this proposal was likely to be too much for the heads of state and government to accept, though they were still mulling over it late into Monday night.

On other issues, the summit leaders were expected to agree to create the AU troika of member states which was proposed long ago to deal with the thorny issue of Western Sahara, but which has never met. It is supposed to comprise South Africa, Egypt and Rwanda. It has probably not met because the enthusiasm for Western Sahara’s campaign for independence from Morocco has been steadily waning since Morocco rejoined the AU in 2017. However South Africa, now that it is in the AU chair, is trying to revive the issue.

Another dispute which the summit left in limbo was that in South Sudan. South Africa has a special role in trying to help regional mediators resolve the bitter conflict between President Salva Kiir and his former deputy but now arch-rival Riek Machar. Ramaphosa’s special envoy to South Sudan, South African Deputy President David Mabuza, recently tried but failed to help the two resolve the one outstanding issue preventing the two rivals from forming a transitional government of national unity – by a proposed 22 February deadline.

The outstanding issue is the number of states which should exist within the federal state of South Sudan. The constitution stipulates 10 and that’s what Machar wants. But Kiir in 2015 unilaterally increased the number to 28 and then 32, and has refused to rescind this decision.

Ramaphosa met Kiir and Machar separately at the summit, but it is not clear what progress he made, if any, in bringing the two closer together. DM