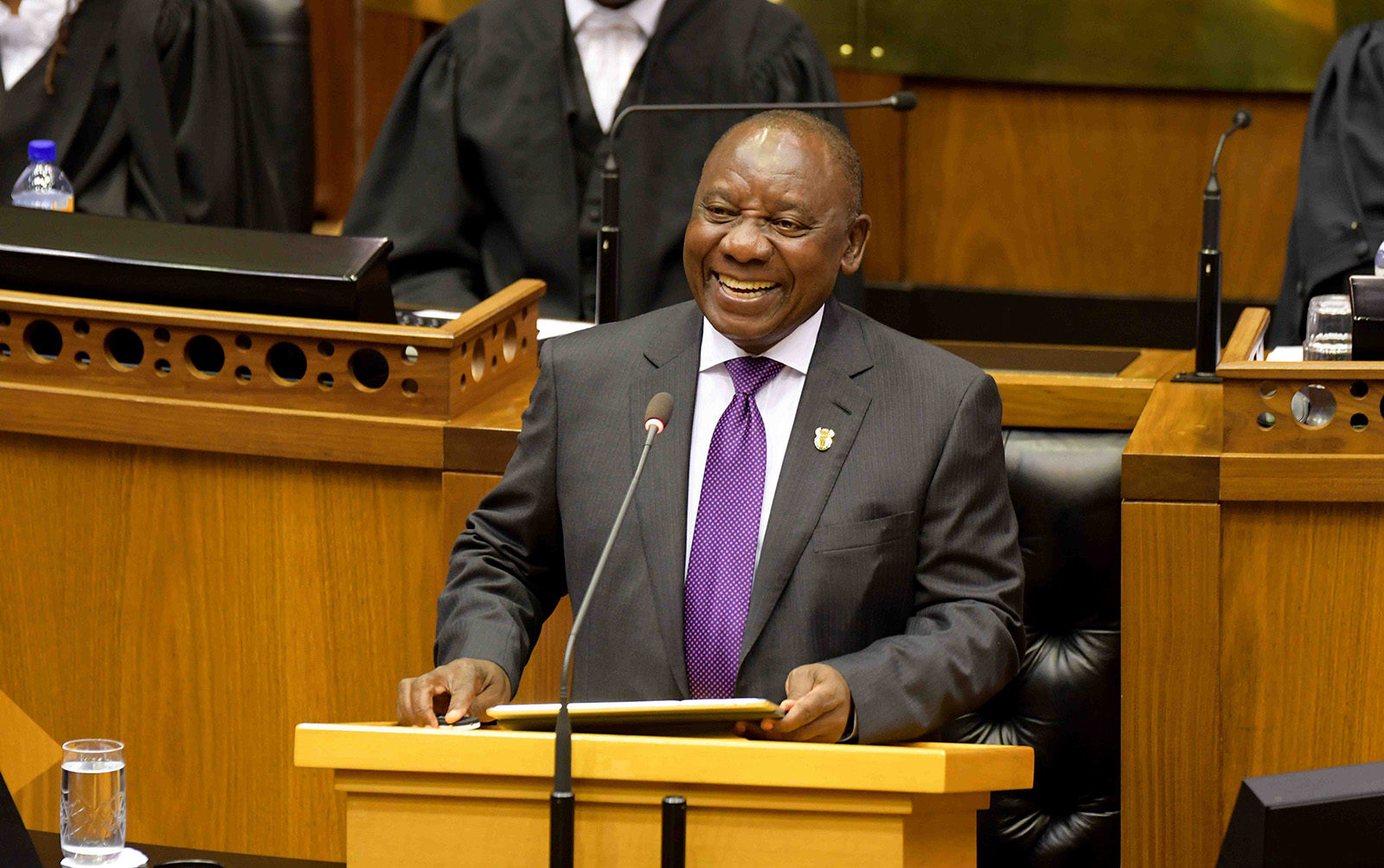 President, Cyril Ramaphosa during the State of the Nation Address (SONA) 2018 in Parliament on February 16, 2018 in Cape Town, South Africa. SAs incoming President Cyril Ramphosa delivered his first SONA after he was elected at a sitting in the national Assembly on 15 February 2018. SONA, is an annual event in Republic of South Africa, in which the President of the country reports on the status of the nation, to the resumption of a joint sitting of Parliament. (Photo by Jeffrey Abrahams/Gallo Images/Getty Images)

On Thursday, all eyes will be fixed on Parliament for the State of the Nation Address.

The 2020 State of the Nation Address, due to be delivered at 7pm on Thursday 13 February before a combined gathering of Parliament, the Judiciary and the public, will be a report on the economic and social state of the nation, and include a review of the past year and priorities for the current year.

In the lead-up, the entire precinct will be abuzz with that special energy that comes with such an event as construction and cleaning crews do last-minute touch-ups, security personnel do their drills and those participating in the parade undertake rehearsals. The perimeter outside the legislature will be impacted by road closures.

It’s one of the most important speeches that the President delivers in any year. With a prime time TV audience, it is a tremendous PR opportunity for the President to simultaneously lay out his agenda and reassure doubters, both local and foreign.

The occasion is steeped in tradition and includes a red carpet procession, a 21-gun salute and an Air Force flypast.

Government’s dwindling finances, persistent unemployment and inequality, a weakened and untransformed economy, corruption and the problems weighing down state-owned companies are some of the major challenges facing the country. With so many pressing needs, the President will be expected to talk to these issues in his speech. He could also make one or two surprise policy announcements.

Violence, disruptions and walkouts have marred previous addresses in recent years. The EFF has announced its intention to disrupt proceedings if the President did not remove Minister Gordhan from his post. It’s therefore possible that more chaos can be expected this year.

As the President steps up to the dais, he will know that there are a lot of expectations and that the public and financial markets will be watching the speech closely.

Despite the scant two-day schedule there are several interesting meetings lurking in the committee corridor this week. Here is a breakdown:

The Department of Basic Education will brief lawmakers on the state of school readiness for 2020. The briefing will have wide-ranging covering topics such as learner admissions and registration, undocumented learners, teacher provisioning, learning and teaching support materials, basic infrastructure and learner transport. The department will also present on the outcomes of the 2019 National Senior Certificate examination. (Tuesday)

The Portfolio Committee on Mineral Resources and Energy will meet with the Department and Business Rescue Practitioners on the investigation conducted following the incident that happened in Lily Mine and resulted in three workers being trapped underground in a container. In its Legacy Report, the Portfolio Committee on Mineral Resources recommended that the incoming committee follow up with new owners of the Lily mine to ensure that, as mining commences, efforts to retrieve the bodies of three Lily Mine employees are accelerated. (Tuesday)

In 2019, the Department of Higher Education and Training signed a Memorandum of Agreement with the National Treasury and the Development Bank of Southern Africa to accelerate and fund government’s Student Housing Infrastructure Programme, which aims to create 300,000 new beds at the 26 public universities and 50 public Technical and Vocational Education and Training colleges. Legislators will get an update on this programme. The student protests at UWC due to student accommodation will be raised sharply during this engagement. (Tuesday)

The challenges faced by community radio stations will be in the spotlight when the Media Development and Diversity Agency briefs MPs on this topic as well as its interventions to address the challenges. (Wednesday)

In between, MPs will be looking at legislation: National Minimum Wage Amendment Bill; Department of Agriculture Land Reforms and Rural Development legislative programme and the Database, Skills Audit, and the Military Veterans Amendment Act. DM

Read the PMG blog on: All You Need To Know About SONA