South African rugby players are not in rude health 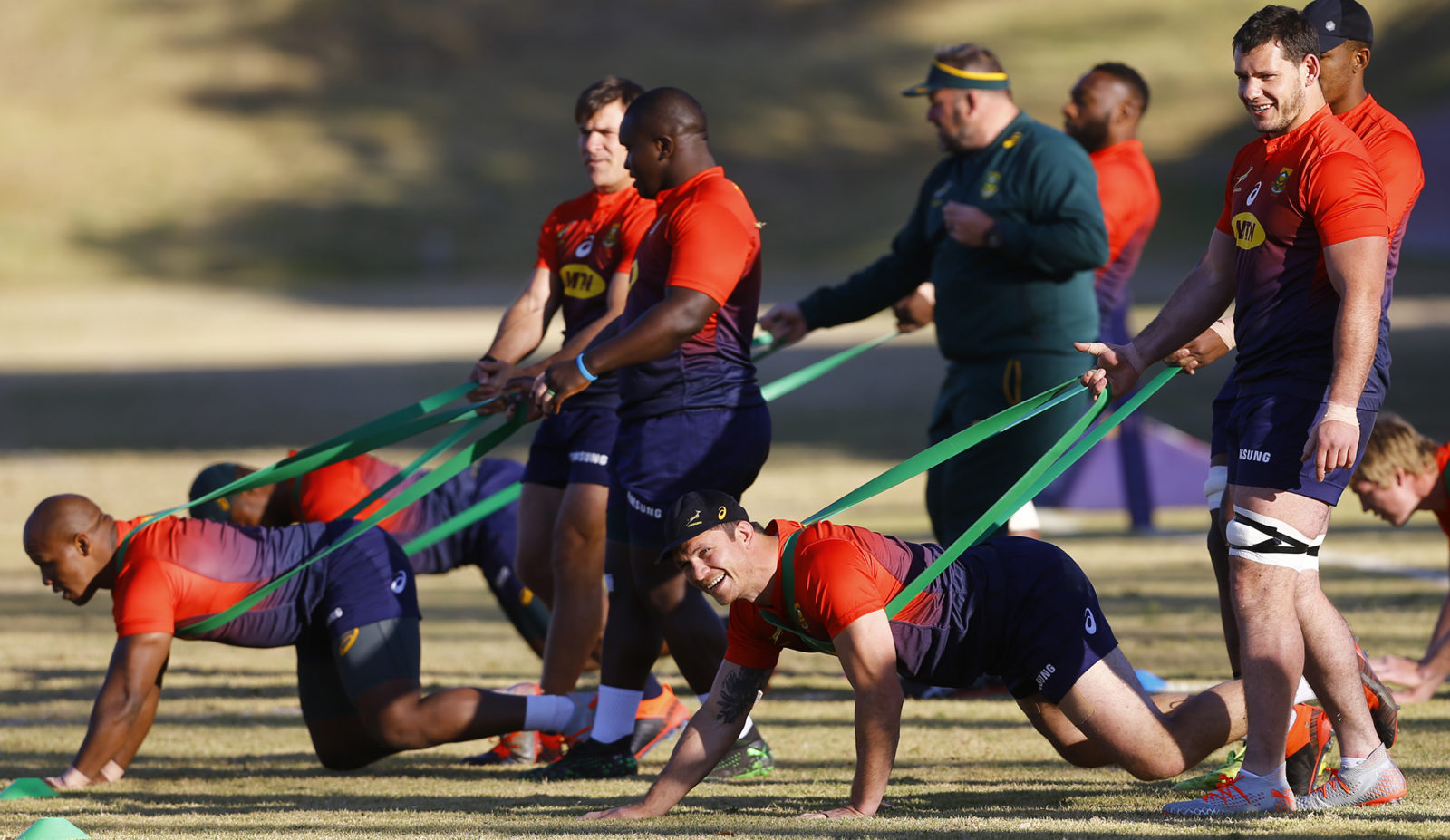 Springbok forwards use rubber bands to practice scrumming. A survey has revealed that a whopping 80% of players were concerned about the lasting impact professional rugby would have on their physical well-being in later life. (Photo: EPA-EFE / Kim Ludbrook)

An extensive survey of South African professional rugby players reveals that 40% suffer from one or more symptoms of common mental disorders.

As rugby moves into its 25th year as a professional sport, the first comprehensive survey investigating the positive and negative side of the sport has just been published — and the findings are revealing.

The most startling result to come out of the research was that four out of 10 players suffered symptoms commonly associated with mental disorders.

A third of the players surveyed admitted to sleep disturbance and 5% of the respondents also admitted to sleep medication addiction. Furthermore, 65% had suffered concussion during their professional careers and 49% of them expressed concern about what effect it would have on their health in later life.

A whopping 80% were concerned about the lasting impact professional rugby would have on their physical well-being in later life, but 90% said they received quality medical attention as professional players. 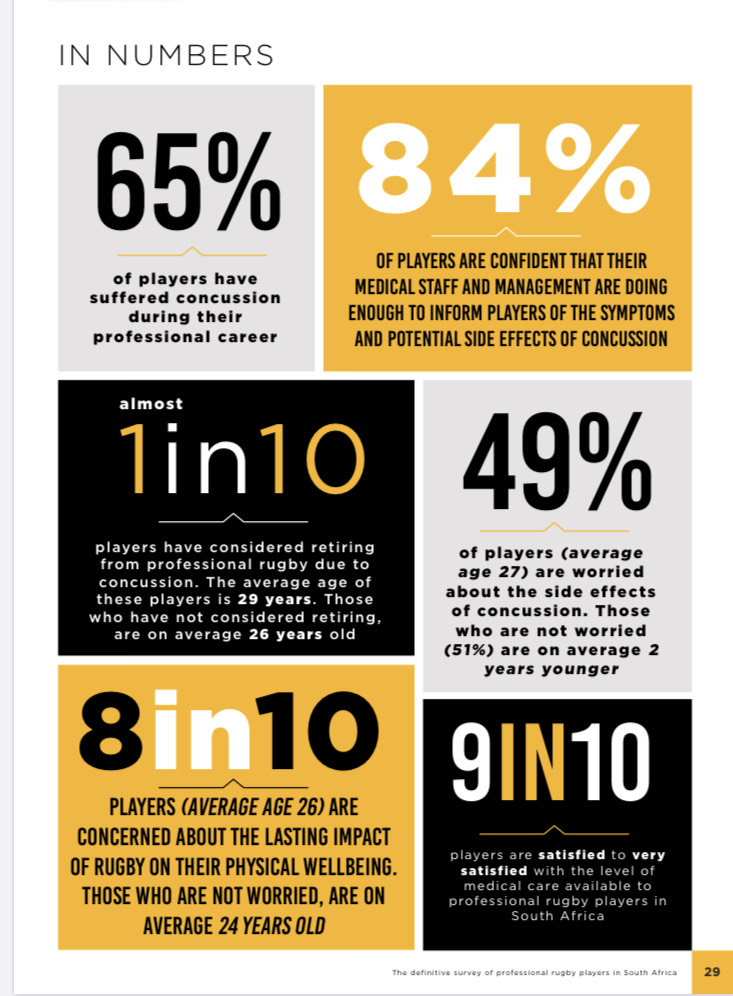 By surveying 18% of its members, MyPlayers surpassed the accepted norm of 10% for these types of studies. The interviews and surveys, which began in January 2019, took about three months to compile and then the remainder of the year was spent analysing and finalising the findings under 11 core headings.

Players were asked to comment on: Tournaments, travel and accommodation, the laws of rugby, quality of coaching, concussion and physical health, mental health, career planning and personal development, playing overseas, doping and substance dependence, agents and employers and their strategy.

If, for example, two responses under different topics appeared to be related – such as financial security and signing an overseas deal, or concussion and mental health – responses were amalgamated under a single heading or related headings.

The report does not recommend remedial action. It was undertaken to ascertain a deeper understanding of players’ needs, fears and expectations as professionals. The next part of the process is developing plans to address some of the outcomes.

Key findings of the report were:

According to the report, all players admitted to suffering from anxiety – some more so than others, and for different reasons: injuries, poor performances, relationship breakups, divorce, being dropped from a side, death of a friend or family member, and having only months left on a contract.

In very few cases, players felt comfortable talking to their coaches about vulnerabilities, anxiety, and their reasons for performing sub-optimally.

MyPlayers rolled out a mental health helpline for its members in 2017, which is managed by the Institute of Psychology and Well Being (IPW), a department of the North West University in Potchefstroom. 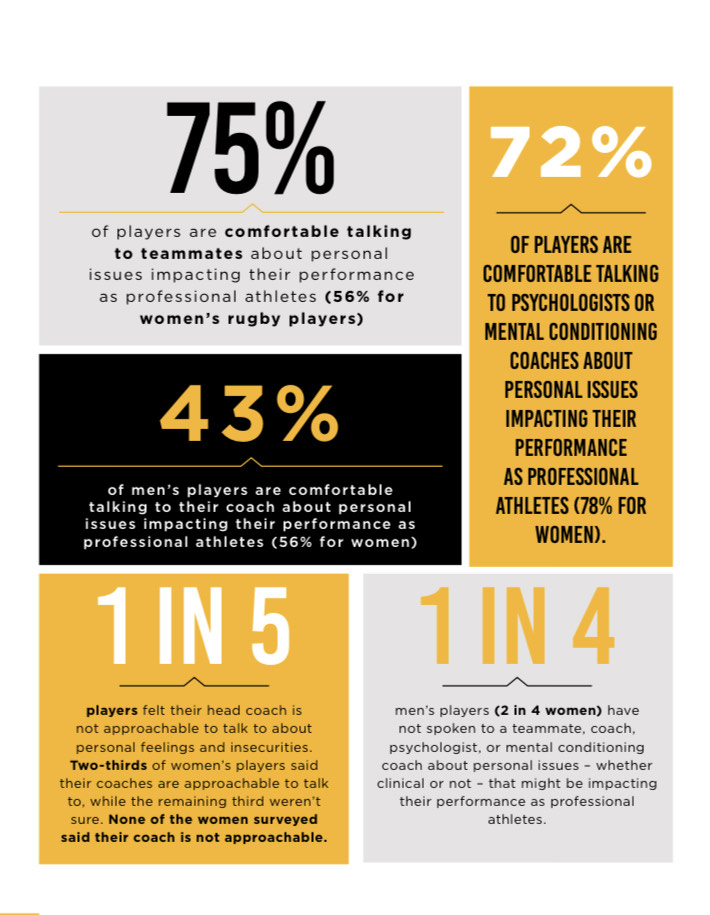 There is a single national number, which players contact from anywhere. They will be put in touch with the IPW via an answering service.

Within 60 minutes of the call going into the helpline, the relevant player is contacted by the IPW to start the process of setting up the appointment with a designated psychologist in their area.

“The topic of mental health is not something which enjoys much coverage yet it is a matter affecting players tremendously,” MyPlayers chief executive Eugene Henning said at the time of the launch.

“As professionals, players are expected to perform in high-pressure environments on a regular basis which places overwhelming strain on their ability to cope at times. Furthermore, dealing with injuries, balancing family responsibilities as well as post-career anxieties are some of the concerns players face as they go about their careers.”

It was a prescient bit of management by the union, recognising the need for players to find emotional and mental support especially in light of some anecdotal evidence at the time.

Grobler, who went to play for Munster when the ban ended, gave a revealing interview to Britain’s Daily Mail in 2018 where he shed a light on his struggle.

“I’d had really bad ankle and shoulder surgery. I was in a moonboot and wearing two slings. My life was in and out of theatre,” Grobler said. “Nine surgeries in a year. I was taken by pain pills completely. Painkillers, OxyContin, those kind of things. You get given them, you take them, I really liked them. You’ve got to be honest about it: I was hooked on it. When I woke up in the morning that was the first thing I wanted.

“I was hooked on pain pills, I was downward spiralling and I’d done everything I could. I had contractual issues; was I going to sign again? Eventually my back was against the wall.”

Grobler’s painful experience might be on the extreme end of the spectrum, but the MyPlayers report clearly reveals that it is not unique. Unfortunately, more than two years on, the mental health helpline is under-used. Only six MyPlayers members used it in 2019.

Another, less startling but no less worrying finding, was that 90% of players have either signed a contract with an overseas club or intend to sign one.

Financial security was the main motivation for foreign contracts (51% of players cited this as their main reason) while other factors included the political situation in South Africa (18%) and to experience different cultures (10%). The impact of transformation was a relatively low 9%.

A senior Super Rugby player revealed that in two years in France he earned as much as he had in the seven previous years in South Africa. But he did warn that young players needed to be careful of being seduced by an attractive offer without fully understanding the ramifications of living and paying tax in a country such as France.

“It’s really important to keep in mind that you’ll cough up more taxes, the more euros you earn,” the player said. “Once you reach a certain category of income, you’ll pay vastly more taxes than what you’re used to.

“If you go to France and you don’t negotiate your contract around that reality, you might end up earning much less than you had anticipated when you first decided to leave.”

Although the lure of earning more money is a massive factor, players revealed that being given contracts of between three and five years in Europe was more attractive than the one-to-two years they are offered in South Africa.

There was also distrust between players and management at South African provincial levels.

Several Springboks surveyed said that, in South Africa, their franchise employers often waited until the last minute to contract them. This caused stress and tension, “because you’ve got a family and kids,” and they are getting offers from Europe, which are usually for three years and give them security. So, you say to yourself, my guys are taking forever to talk to me about my future, while Europe is offering me medium-term security. What do you do? What can you do?”

Henning believes the survey is a starting point. Now that the scale of issues in South African rugby has been measured, the process of how best to manage it can begin.

“Certain outcomes were easy to predict, but our research also highlighted areas of the game that would require us to dig deeper and ultimately act on to improve player welfare and rugby as a whole,” Henning said.

“So, in many regards, this project gave us an indication of how the wind blows. The next step will be for MyPlayers, and other industry stakeholders, to determine how strong those winds are, what causes them, and what steps may be necessary.” DM