From tombstone to courtroom: remembering ‘a big brother in the movement’ 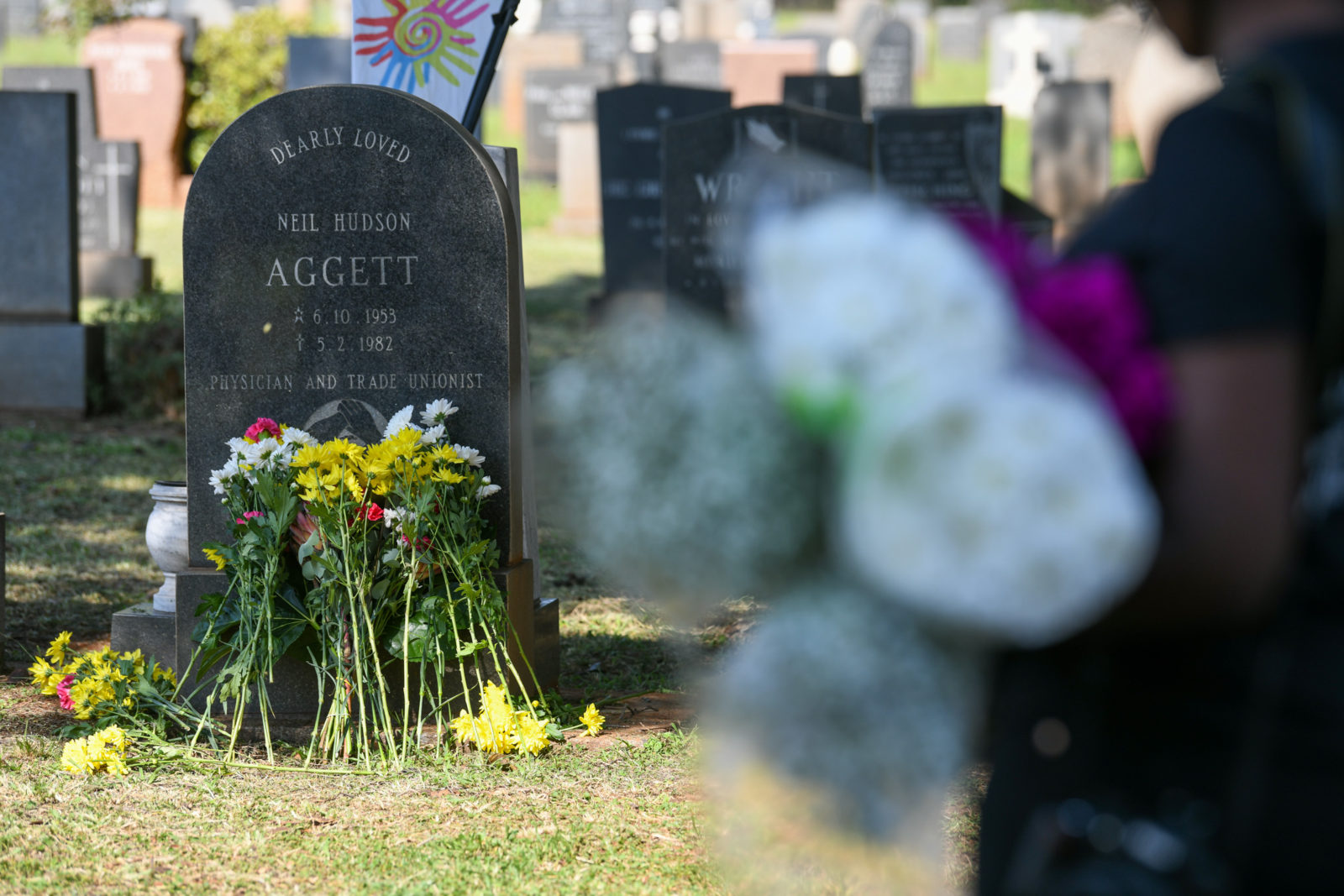 Family and friends gathered at the Westpark Cemetery hosted by The Kathrada Foundation in memory of Neil Aggett. Neil Aggett was a white South African doctor and trade union organiser who died while in detention after being arrested by the South African Security Police in 1982. An inquest into his death is currently underway at the Johannesburg High Court. 5 February 2020. (Photo: Chris Collingridge)

A day of remembrance, of correcting lies and connecting with old foes on a courtroom benchmarked yesterday’s events in the reopening of the inquest into Neil Aggett’s death in detention.

Neil Aggett’s tombstone in Johannesburg’s West Park Cemetery is understated. The physician and trade unionist’s grave is next to a road and the shade of an old tree casts shadows that creep up the dark marble.

Most days it’s difficult to find its exact location – even his sister Jill Burger says so. But some days it can be a beacon bringing people together, as it was at his funeral and as it was yesterday, Wednesday 5 February, when a graveside memorial ceremony commemorating his death on 5 February 1982 was held by the Kathrada Foundation.

In some ways, the tombstone reflects the picture of Aggett’s life and his death emerging from the hearings at the reopening of the inquest into his death.

His life as a 28-year-old physician and trade unionist was purposeful and committed, also understated. His death and the way he died, however, has made Aggett a looming symbol of truth-finding and accountability. This applies to the circumstances surrounding his death on the notorious 10th floor of what was then John Vorster Square police station, through to the questions his death leaves about what leads a country to slide deeper into corruption, inequality, racial division and violence.

Speakers at Aggett’s graveside yesterday paid tribute to a man of compassion, integrity and principle who cared more for the “rank and file” in the Food and Canning Workers Union than hierarchies.

Rob Rees, a trade unionist, said Aggett “was like a big brother in the movement that you looked up to”, but added: “I wonder what Neil would have thought of the trade union movement today, from its organisational principles to its moral principles.”

David Lewis of Corruption Watch also spoke about the decline and corruption in South Africa and how it makes Aggett “stand head and shoulders above others”.

Prema Naidoo, who testified at the current inquest into Aggett’s death, said Aggett was part of the story of a struggle that was about freedom and non-racialism. “It’s difficult to relive the past; it’s emotional,” but it has to be done to find answers for families.

Gathering at the grave was also a pause to celebrate Aggett’s life, said Burger of the “little brother” she was particularly close to.

As the memorial ended, it was back to the Johannesburg High Court for the inquest to continue. Among those taking the stand yesterday was former Security Branch officer Sergeant Mohanoe Makhetha. He was stationed at John Vorster Square police station, in charge of detainees at the time Aggett died.

He described the racial hierarchy and separation among the white and black Security Branch police officers. Black officers were not allowed into certain restricted areas and “I didn’t trust them,” he said as he told how Lieutenant Steven Whitehead, who was known to be Aggett’s chief torturer, would often demean his black colleagues by sending them on errands to buy him cigarettes or get them to wash his car.

Black officers were not part of interrogations and were chiefly deployed to escort detainees to and from their cells and interrogation rooms and to doctors’ appointments. They also conducted searches of cells and carried out patrols.

Speaking through an interpreter, Makhetha said he remembered Aggett and even though they were told not to “get close” to detainees he did remember that Aggett told him he was a doctor who worked at the then-Baragwanath Hospital in Soweto.

“When he started his detention he looked fine, he was good-looking. You could see that he was someone who was taking care of himself,” Makhetha said.

A week before Aggett’s death, after 70 days in detention, however, Makhetha said Aggett’s “condition had changed; he didn’t care about his hair, he didn’t shave”.

Makhetha testified that detainees were allowed their clothes and food parcels from their families but nothing they could harm themselves with – definitely not anything that resembled the kikoi Aggett was said to have hanged himself with. He added that failure to search a cell properly and to confiscate prohibited items would have resulted in him and his colleagues being disciplined.

Makhetha confirmed that he frequently heard screams from detainees and sounds of people being beaten and slapped. He, however, testified that he did not remember the names of any of the officers involved in interrogations, apart from Whitehead and Major Arthur Conwright who headed up the interrogations.

Makhetha was also questioned about a statement he made at the initial inquest into Aggett’s death. At the time, he disputed the testimony of Maurice Smithers who was detained at the same time as Aggett but was held at the Randburg police station. Smithers testified that days before Aggett’s death he saw him through ribbed glass at John Vorster Square being made to do exercises and possibly being beaten with a rolled-up newspaper or magazine by about six white men. Smithers had been transported to John Vorster Square police station en route to an appointment with an optometrist.

Makhetha admitted yesterday that he had lied in 1982 when he said Smithers’ account was false. He said he was given a statement by his superiors to present as his own. Makhetha also told how he feared for his own safety, his job and the safety of his family if he disobeyed their instruction.

“I was made out to be a liar and in the end the magistrate considered me an unfit witness at the inquest, so hearing this today is important to me,” said Smithers, during the court’s lunch recess.

More important perhaps, on a day that started with a remembrance event for Aggett’s life, was that Smithers was eating lunch on a bench outside the courtroom while in conversation with Makhetha for the first time.

“I had some things I wanted to ask Mr Makhetha, but I’m not angry with him. You have to understand the oppression of apartheid and what that meant even for black Security Branch officers. It’s about context and compassion,” Smithers said.

Makhetha, who sought a transfer after Aggett’s death “because I didn’t like what was happening at John Vorster Square”, said as he sat with Smithers: “I am feeling good. I’m fine because today I chose truth. I don’t have any regrets.” DM

Movement should be safe for migrants, not profitable for smugglers