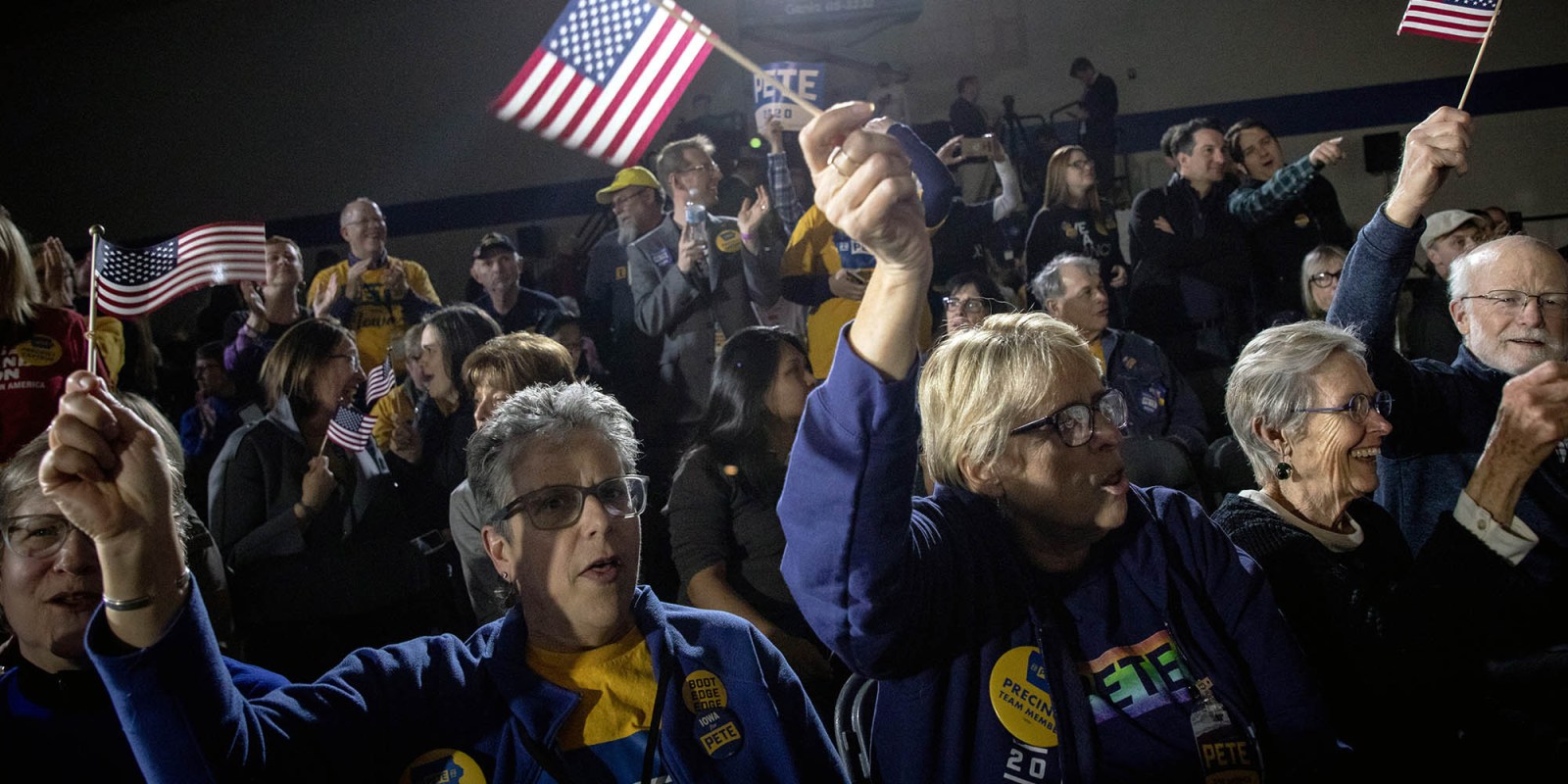 Supporters of Pete Buttigieg, candidate for the Democratic nomination in the 2020 United States presidential election, wait for results at the Pete for America caucus night watch party at Drake University Bell Center in Des Moines, Iowa. (Photo: EPA-EFE / Gary He)

In the first actual voting for the 2020 US election, the Democrats managed to pull off a major debacle as the results from the caucus in Iowa remain hidden in a distant black hole, somewhere past the Andromeda Galaxy.

It was supposed to be a beautiful demonstration of grassroots democracy in action. People all across a Midwestern state of friendly, honest, hardworking, normal Americans had gathered in their thousands, all across Iowa, to express their publicly stated, freely held choices for who should be the Democratic Party’s candidate for the 2020 election.

The caucus meetings met in some 1,900 precincts, in church, school, and community halls. Voters expressed their candidate preferences in a process that ultimately culminates in the selection of delegates for the party’s national convention, held later in the US summer, in Milwaukee, Wisconsin. The voters initially lined up behind their first choice, and as the individual meetings identified leaders, supporters of any candidate who failed to reach the 15% level had the choice to go home to an early dinner or line up behind another candidate who had already racked up a bigger percentage.

Alas, this whole structure had virtually collapsed by early evening on Tuesday, South African time. The organisers have now accepted the reality that their multiple reporting of results was a disaster, a Snafu, a black eye, a massive embarrassment. Their special app to receive results from the 1,900 precincts broke down, the help-line and alternate reporting process went unanswered, and there have even been so-far-unexplained differences in the totals of the various channels, hence the lack of any reported results so far, as the paper preference ballots are being retabulated. (Shades of the 2000 presidential election debacle in Florida?)

In fact, this mess in Iowa may doom the very idea of the caucus in future. This year, most states will be selecting delegates by means of primary elections, while only six are making use of the caucus mechanism. Next time it might be none.

The caucus was developed in 1972 for Democrats and 1976 for Republicans to get delegation selection completely divorced from government mechanisms (by contrast, primaries are ultimately in the hands of state election bodies) and into the hands of the individual parties and voters. In other words, it was a reform mechanism to bring elections closer to the people. One idea behind its adoption was to give some breathing space for lesser-known candidates to test the waters with a very voter-by-voter retail effort in smaller population states as such candidates try out ideas and approaches, before they fight it out in much larger states.

The caucus became increasingly popular in the 1970s, and Iowa had scheduled its caucus to come just ahead of the New Hampshire primary. This year, that comes on 11 February. New Hampshire’s primary, by provisions of state law, must always be held first in the nation.

The primary system itself had been an earlier element in a more populist, reform agenda, begun back in the early 20th century, as a means to wrest candidate (and thus delegate) selection out of the hands of all those shady party machine bosses. But even as recently as the 1960 Kennedy-Nixon election, the majority of delegates were not selected through primaries or caucuses.

Anyway, as this is written, in Iowa, they – the Democratic Party leaders, candidates, voters, volunteers – are still trying to make some sense out of the mess they have created. And the country’s media is now caught trying hard to report on an important moment in the country’s electoral process, but doing so in the absolute absence of any reportable data. Amazing.

The candidates, meanwhile, as it has become clear there is nothing reported yet, have each taken their turns at their respective campaign headquarters in Iowa to speak to their supporters as if they had won, or, at the very least, exceeded the expectations of pollsters, political operatives, and the media. There are suspicions candidates Bernie Sanders, Elizabeth Warren, Amy Klobuchar and Pete Buttigieg have exceeded expectations, while the former vice-president Joe Biden under-achieved in his effort. But with 11 candidates still in contention, it is unlikely any candidate gained an actual majority.

In those speeches, at least in the view of this observer, Buttigieg and Klobuchar’s speeches were the best at reaching to a higher moral plane and with a call to further national action on social and economic issues. Sanders and Warren, in their speeches, stuck to the higher tone about the results and the larger process, whenever the results finally arrive.

But the impact of any of those speeches, and even the actual results, have now been blunted severely, since every candidate is already making a beeline to (or is already in) New Hampshire to campaign furiously in the final week before that 11 February primary. Now the narrative line may well become: “Just ignore Iowa, focus on New Hampshire’s real results.” One side-effect is to make it harder for fundraising by candidates such as Biden who has already had fundraising difficulties.

Some political operatives and even a candidate or two (such as Biden) were starting to mutter that this massive screw-up meant the results could not be trusted (unless they or their candidate is ultimately shown to have done well, of course). And, inevitably – a sigh, a shrug of the shoulders, eyes rolling heavenward – Donald Trump’s uber-truculent son, Don Jr, took the moment to stir the waters by intimating the results were rigged, whatever they were, whatever that means.

All of this is coming in the midst of the day of Tuesday night’s State of the Union speech by Donald Trump, a major made-for-television evening in which the president now gets to “launch” his own presidential campaign with all the pomp and ceremony possible. And then there is his anticipated acquittal by the Senate on Wednesday 5 February in the impeachment trial.

The shambles among Democrats, and the president’s expected win in the Senate vote, gives him an unaccustomed chance to rise above mere party politics and disarray in this speech, and to speak like an adult to the nation, instead of his usual behaviour of being a disobedient teenager and neighbourhood bully. Will he do it? Anybody want to take that side of the bet? DM