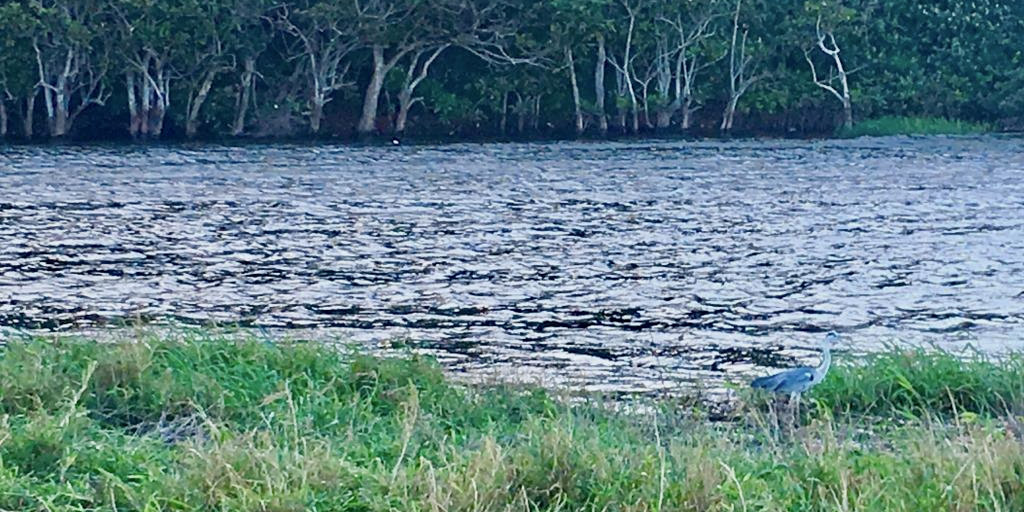 Civil action could address pollution in the Mdloti river.

Three years ago, national environmental authorities warned the eThekwini municipality to tackle the chronic pollution of the Mdloti River or face criminal prosecution. But it seems little has come of the threat.

In early January, with the holiday season still in full swing, the Mdloti River mouth – near the resort villages of La Mercy and Umdloti – turned inky black and smelly. This sparked renewed demands by outraged residents that the eThekwini municipality take action to end recurring pollution in the lagoon.

However, an independent expert told GroundUp that given the size and complexity of the problem there was little chance of a quick fix. Poor sludge management at a nearby wastewater treatment plant was the biggest cause of pollution in the river.

The Mdloti River has its source in the hilly rural country but as it descends to the coast, it passes through dense settlements. After exiting the Hazelmere Dam the river skirts the factories and industrial parks of Canelands and Riverview Park.

Next it passes the Verulam wastewater treatment works, less than 10km from the mouth of the lagoon. It is here that many residents, the expert and some municipal officials believe the problem lies.

Jennifer Beresford, a resident of Mount Moreland, about a kilometre upstream from the mouth, has been pressing the municipality to take action. “The stench of raw human waste became overwhelming,” she said. “For many years our community in Mount Moreland has been having a problem with sewage from the Verulam sewage plant flowing into the Mdloti River. It has been reported many times.”

Beresford shared her email exchanges with municipal officials. In one, sent in mid-January, a senior eThekwini environmental health official, Vasie Pillay, acknowledged pollution levels were so high that fish in the river had been struggling due to a lack of oxygen.

“Many can be seen just under the surface of the water. The extremely hot weather does not seem to be helping either and what is worse is that this stream eventually runs into the La Mercy Lagoon and on to the beach,” said Pillay.

Beresford said Pillay advised her that she had escalated the matter to the municipal water and sanitation department, which had been providing Beresford with updates.

Pillay could not be reached for comment at the time of publishing.

Beresford said she was continuing to press the municipality for the results of laboratory water quality tests and copies of any department reports on the problem.

“All historical evidence points to the Verulam waterworks being the main source of the problem. The river remains black, smelly and foamy,” she said.

Angie Wilkins, chair of the Mount Moreland Conservancy and a resident of the area for 30 years, said that after a similar incident in 2016, she had been told by a municipal official that dye from a factory upstream of the works was to blame. We could not confirm this, however.

Wilkins speculates that river pollution may be the reason that for the past three seasons vast flocks of barn swallows that used to roost in the wetlands and attract hundreds of visitors have vanished. Climate change, habitat destruction, agriculture and low-flying air traffic from King Shaka International Airport, which opened 10 years ago, may also be responsible.

“The City is currently conducting an investigation so as to ascertain the source of this raw sewage that is reported to be spewing into Mdloti River. We would like to apologise to all our residents who are bearing the brunt and we hereby make an undertaking that the City will come up with a permanent solution to this challenge.”

As far back as 2013, environment journalist Tony Carnie reported that pollution in Mdloti River had been traced to the works.

In 2017, Roving Reporters described how the river was choked with a frothy gunge near Mount Moreland. This sparked an investigation by the Department of Water and Sanitation, which slapped the municipality and the Verulam works with Section 19 compliance orders.

The orders, in terms of the National Water Act 36 of 1998, are the first step in a legal process that, on paper at least, could lead to prosecution if those responsible for managing the works failed to comply with laws governing waste treatment.

At the time, national Department of Water and Sanitation spokesperson Sputnik Ratau said:

“The message we want to send out is certainly: ‘Get your act together or face criminal prosecution.’ ”

Asked this week what the department’s next course of action would be, Ratau said the root cause of the problem had not been addressed and the department now needed to “engage at the level, which is enforcement protocol”.

This would involve high-level meetings with accounting officers to produce measurable outputs that the department could monitor, he said.

“This way, the department will be able to compel the municipality to commit to and comply with set and agreed outputs in order to address the issue of pollution,” he said.

He rejected suggestions that the department had been slow in taking action. “Slow as in determined by what? We are taking the necessary action and following the requirements. The idea of compliance enforcement is to engage the transgressor with the intention to bring him to comply. Punitive measures are regarded where there is no requisite response,” said Ratau.

But an independent expert, who declined to be named, said eThekwini needed to expand preventive maintenance of its sewerage and roll out networks to informal settlements.

Exacerbating the problem were pressures from climate change and, more significantly, widespread illegal connections of stormwater drains into sewers. As many as one in five households in eThekwini had illegal connections and consequently parts of the City’s sewerage network could not cope when it rained heavily and overflowed into rivers before the waste could be treated.

Many of eThekwini’s 27 wastewater treatment works faced serious problems with the disposal of sludge – the solid matter that remains after effluent is discharged into rivers. The expert, who has many years’ experience in the industry, said sludge was supposed to be removed and disposed of at municipal landfill sites, or ideally used as fertiliser. But this often didn’t happen efficiently.

As a result, sludge and untreated waste were flowing into the Mdloti River and settling into an irrigation dam a few kilometres downstream of the works. The expert believed this was a major source of the putrid black water now choking the estuary.

“It’s not a capacity issue,” said the expert. The plant had been upgraded 10 years ago, so the current problems were not related to any long-term planning for a new regional plant.

The expert felt the department was “trying its best under difficult circumstances”, but faced a shortage of resources. In any case, the burden of proof in a criminal case was high, making a successful prosecution difficult.

A civil challenge, where the community banded together to bring a class action suit and where a ruling was based on a balance of probabilities, had a better chance of succeeding, the expert said. DM

Additional reporting by Fred Kockott. This story was produced for GroundUp by www.rovingreporters.co.za.