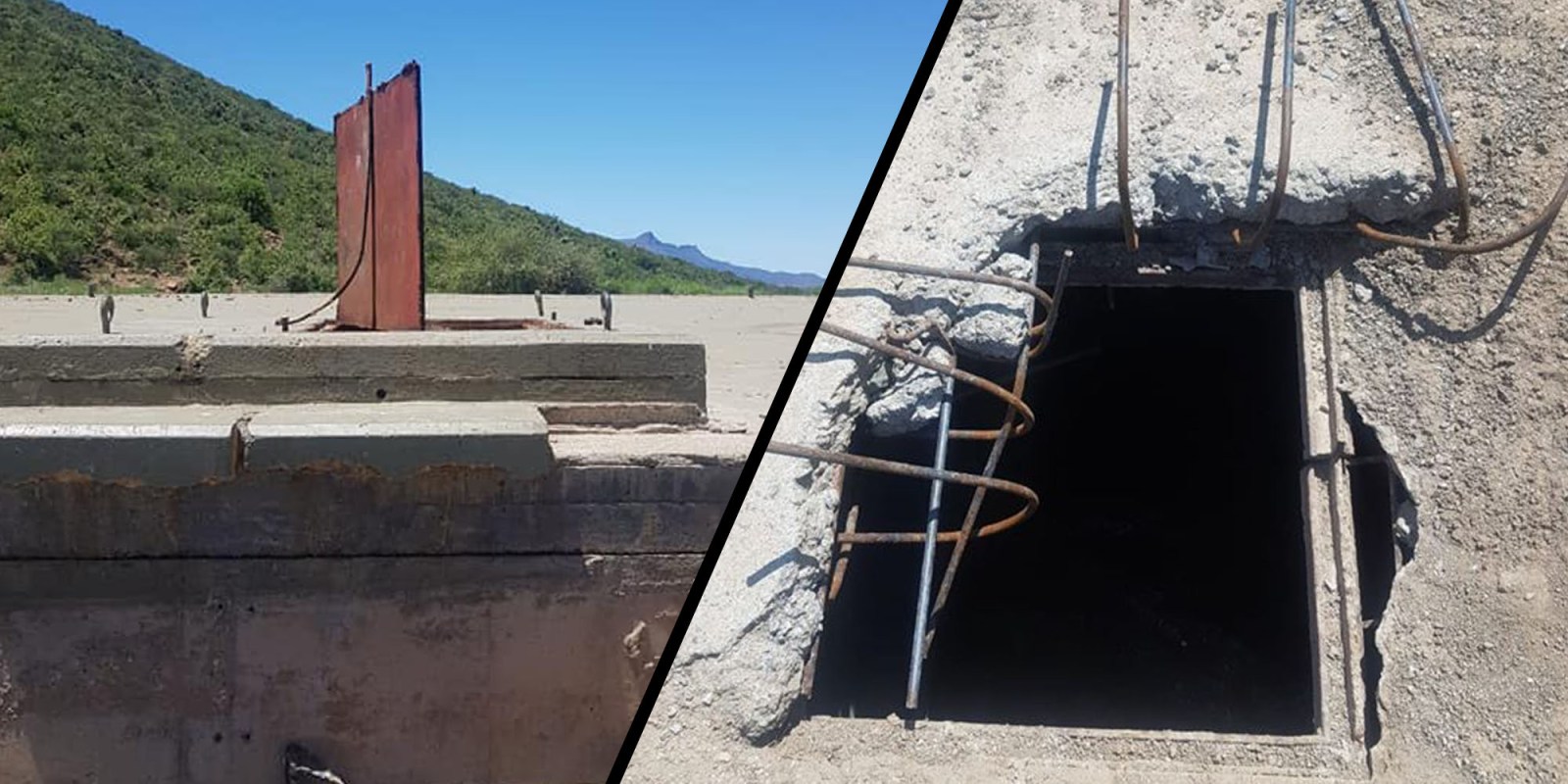 Large parts of Graaff-Reinet were left without water after vandals broke open one of the town's main reservoirs over the weekend. (Photo: Beyers Naude District Municipality)

The Department of Water Affairs has said that municipalities in drought-stricken areas in the Eastern Cape are allowed to limit emergency water supplies to 10l a person a day as the crisis continues in rural parts of the province. Despite good rains falling in some parts, the dire water shortage in many towns has been made worse by load shedding and vandalism as desperate people break open pipes and reservoirs.

As temperatures soared and the discomfort index reached dangerous levels in large parts of the Eastern Cape on Monday, many towns remained without water as drought, load shedding and vandalism continued to impact on water provision.

Spokesperson for the Beyers Naude Local Municipality in Graaff-Reinet, Edwardine Abader, said they are struggling to provide even 10l of water a day due to limited resources. The town’s main supply dam, the Nqweba Dam, is still at 0% she said. One of the main pipelines in Graaff-Reinet was vandalised over the weekend, leaving large parts of the town without any water.

She said the municipality had implemented a drought tariff as a punitive measure.

“Due to frequent water interruptions, the municipality has trucks carting water to affected areas. It remains very difficult to provide 10l of water per person per day,” she said. She said they were now solely reliant on the town’s 30 boreholes.

“Recently the municipality has been frequently faced with bigger leaks due to vandalism. Attending to these repairs requires additional time, as materials are not always available on site,” Abader said.

“People are trying to steal our pumps and our Jo-Jo tanks. The demands are getting worse as the drought continues and our teams are struggling to cope. There are six communities without water,” she said.

“The drought has affected all districts in the Eastern Cape and in some areas it is the worst drought in memory. A number of towns are facing very serious water scarcity, where dams or rivers are dry,” Department of Water Affairs spokesperson Sputnik Ratau said. He said in many cases towns were relying on groundwater for “emergencies” and these are provided at restricted and rationed levels.

He said the Water Services Act allows for emergency water supplies to be restricted to 10l a person a day.

“Conditions will be even more uncomfortable tomorrow (February 4),” he said.

“As dam levels have dropped, water restrictions have been required to stretch the stored water, but this requires the co-operation of water users,” Ratau said. Where this had not helped, some municipalities had rationed the water use through cutting the water supply for hours, “or even alternate days”, Ratau said.

Water shortages were amplified by load shedding in many towns. The Makana Municipality said it would apply to Eskom to be exempted from load shedding after large parts of the town were left without water on Sunday and Monday.

“Load shedding and power cuts over the weekend have severely affected the pumping hours at James Kleynhans. The main reservoirs (Botha’s Hill) feeding Makhanda could not be filled. This affected water supply to the high-lying areas including the industrial area, Hill 60, Cradock Heights, Spencer Chapman, the prison, the military base, upper Rhodes campus, the Fort England psychiatric hospital area, lower Kingswood, Somerset Heights, Sunnyside and Makana Resort. It is anticipated that water supply will be fully restored late this afternoon. The rest of the areas that water has not been restored to will get water tomorrow. The municipality has sent a letter to Eskom requesting to be excluded from load shedding,” a municipal statement read.

Amathole District Municipality spokesperson Nonceba Madikizela-Vuso said the town of Alice and its nearby villages were hit by flash flooding following a severe thunderstorm on Sunday.

“More than 50 families were left homeless and one woman died when the wall of a church collapsed on her. A child was struck by lightning,” she said. She said despite the flooding in the town, the dam feeding Alice remains at 50%.

“The Adelaide Dam is still at 0%,” Madikizela-Vuso said. She said as Bedford’s dam was now at 36%, the water crisis had been somewhat alleviated in the two towns as water for Bedford can now be taken from the dam and the Fish River. The rest of the Fish River supply is diverted to Adelaide.

Madikizela-Vuso said the water scarcity in some towns is over for now. Hogsback’s dam is back to 100% capacity as is Butterworth’s.

“Vandalism is a big problem for us in Butterworth. We have to fix our pipelines. Our treatment works were also flooded by the rain and the pumps are not working. Dutywa also no longer has water challenges because the dam is full, but we must still take water to the communities because the infrastructure was in disuse for so long that it needs to be fixed first,” she said.

Bedford councillor Cecilia Auld said while the water supply to the town had improved, they had also been hit by vandalism.

“Someone poked a hole in our Jo-Jo tank and also tried to steal a tap,” she said. MC