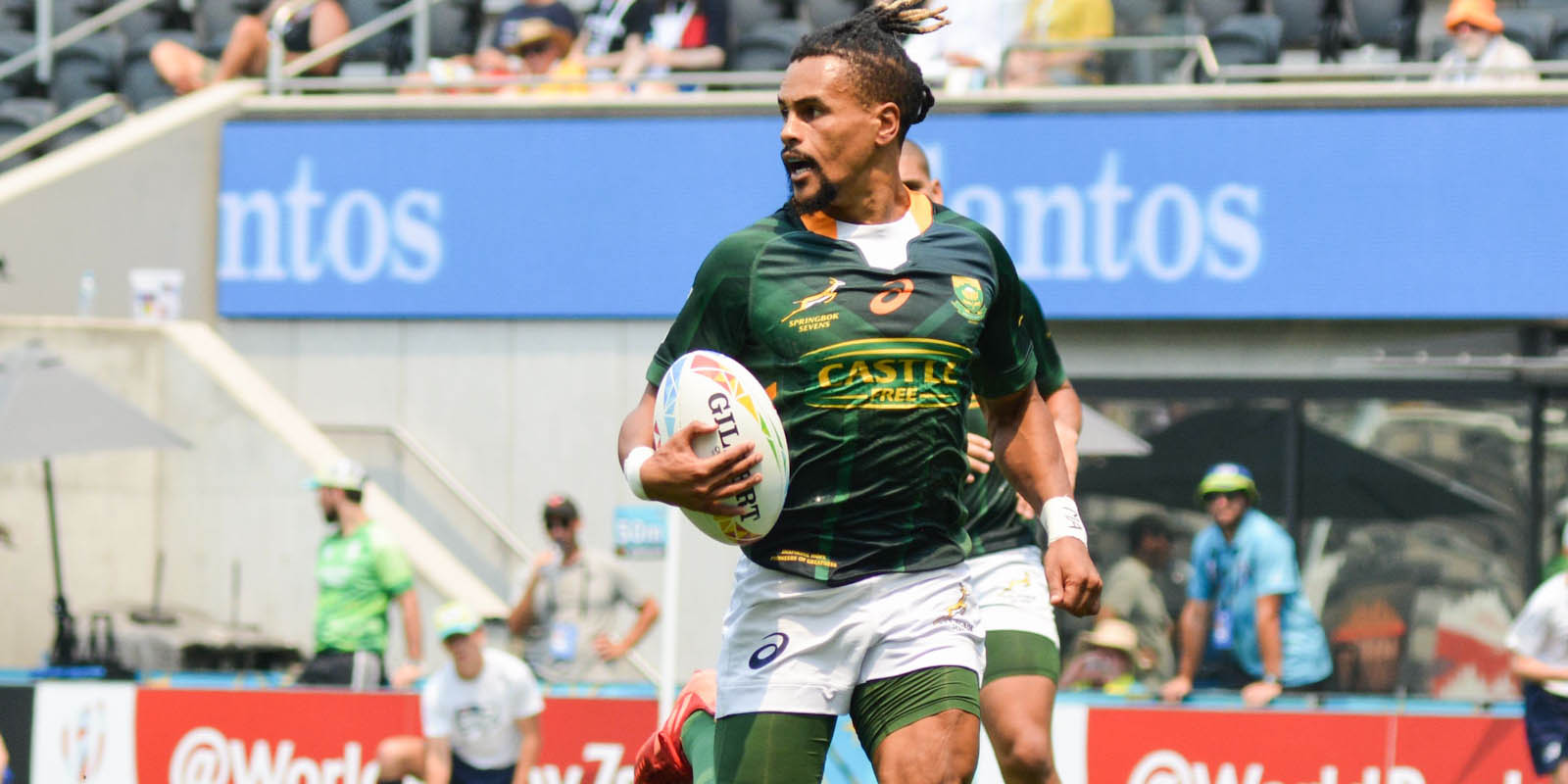 Selvyn Davids, seen here on his way to one of the two tries he scored for the Blitzboks against Argentina on day one of the Sydney leg of the World Sevens Series. The Blitzboks won two Pool C games during the Rugby Sevens tournament of the Tokyo Olympics. (Photo: Twitter/@Blitzboks)

The Blitzboks bounced back from a disastrous tournament in Hamilton by finishing runners up in round four of the HSBC World Sevens Series in Sydney on Sunday, February 2.

A week ago the Blitzboks were reeling from their worst performance in seven years when they finished 10th at the Hamilton leg of the World Sevens Series.

Two Pool defeats saw South Africa miss the semi-finals and they slumped to defeat against Fiji in the play-off for ninth and 10th in Hamilton.

That result took them from joint leaders of the Series with New Zealand after the first two legs in Dubai and Cape Town, to a distant second, 15 points adrift.

A week on and Fiji and South Africa met again, but this time it was to decide the Sydney Sevens title. A week is a long time in most sports, but in sevens rugby, it’s an eternity.

In the final, the islanders eked out a 12-10 win in the torrential conditions to record their first tournament win of the season and send a reminder that they will be a huge threat at the Tokyo Olympics later this year, despite struggling in the first three rounds of the 2019/20 World Sevens Series.

Despite the loss, the Blitzboks are back in the title hunt following a strong series of results in Sydney. New Zealand could only end fifth and as a consequence that 15 point margin has been cut to nine points with six legs of the World Series to play. New Zealand have 76 log points and the Blitzboks are on 67. The chase for the overall World Series title remains alive.

Day one in Sydney was played in sweltering heat and day two in torrential rain. Despite the extreme elements the Blitzboks played some of their best rugby of the season, especially as they emerged from a tough Pool that contained Hamilton runners-up France, Argentina and Samoa.

Their first outing of the weekend ended in a 52-14 win over Argentina. It was as if the South Americans caught the full backlash of the Blitzboks’ disappointment following their Hamilton debacle.

That result, which included a hat-trick of tries for Angelo Davids, and eight in all in the 40-degree heat, set the tone for a brilliant first day. South Africa backed that up with a 24-12 win over France to all about secure direct passage into the semi-finals before completing the Pool stage with a 36-0 win over Samoa.

In the semi-finals the Blitzboks were too strong for the USA, winning 19-12 to set up a clash with Fiji. In the wet and slippery conditions the islanders made few costly errors and one conversion kick proved the difference in the end.

“That one hurts a bit, because we did not sustain the excellent form we displayed in the first four matches of the tournament,” coach Neil Powell said.

“We had some basics letting us down in the final and that was disappointing. We paid the price, unfortunately. I thought we had control of the match till the end, but Fiji exploited our mistakes and they won.

“Our guys really deserve credit though with their effort this week. The final will be a negative, but there are so many positives for us from this weekend. We will be going into the next tournament with some confidence and momentum and that is a good thing.”

Despite the improved performance from the previous week, Blitzbok captain Stedman Gans said the team would probably reflect more on the mistakes in the final against Fiji, than the crushing wins they inflicted on opponents earlier in the tournament.

“We did improve a lot from last weekend and the way we improved was very positive,” Gans said.

“The final was a let-down though and we will have to look at ourselves again, because we lost due to our mistakes. As a squad, we are improving though and I think we are on the up, which is a good thing.”

The Blitzboks will return to their home base in Stellenbosch on Monday, February 3. The next tournament of the World Series will be played in Los Angeles on 29 February and 1 March, followed by Vancouver a week later. DM