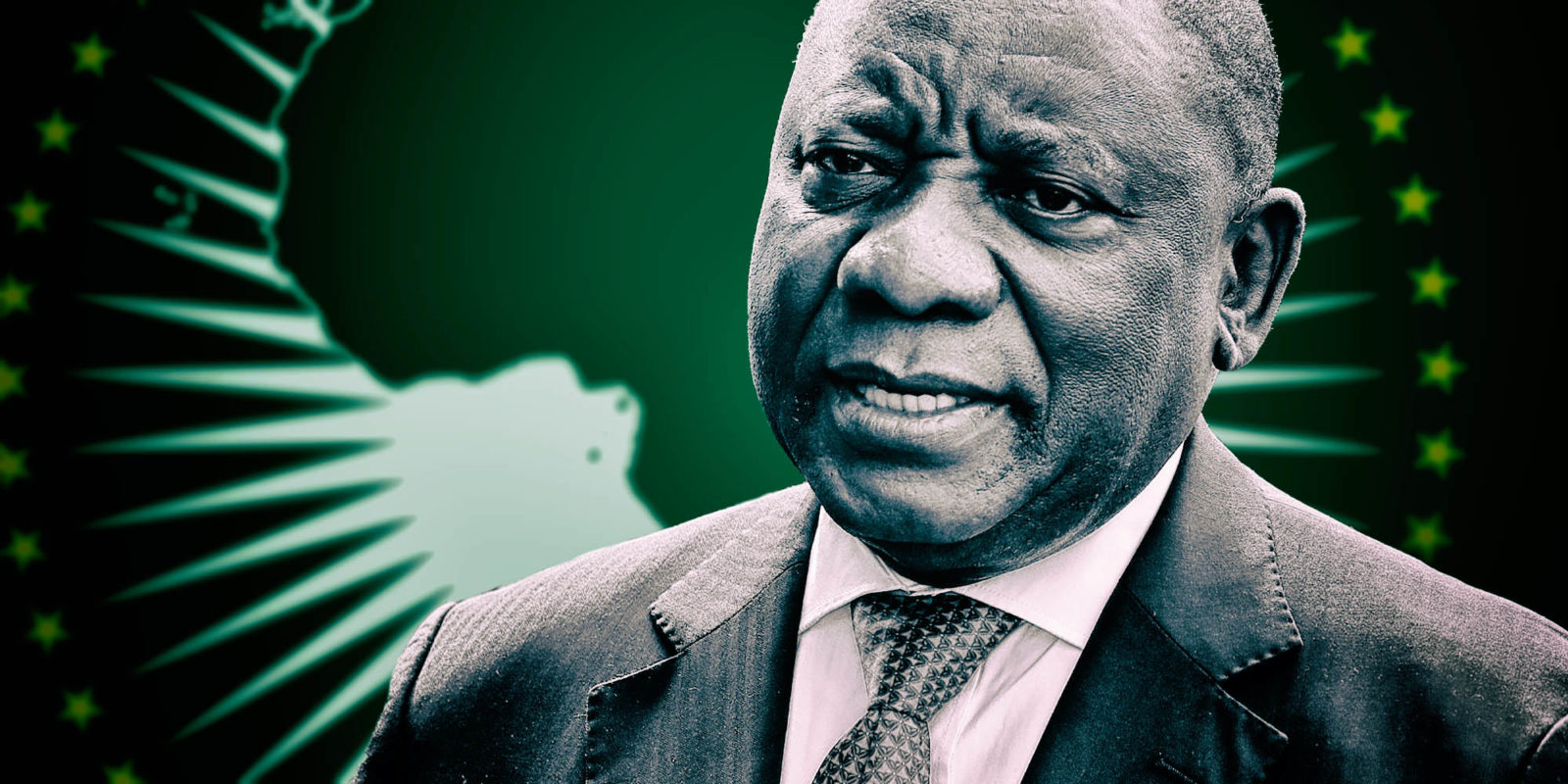 How and on what terms will Tshwane take over from Cairo in addressing the multiple contradictions challenging Africa’s strategic autonomy viz-a-viz Europe across a shared Mediterranean?

As South Africa prepares to assume chairmanship of the African Union in February, the summit of the AU High-Level Committee on Libya that met in Congo Brazzaville at the end of January following the Berlin crisis meeting on Libya is emblematic of inter-regional challenges across Africa’s northern tier awaiting President Cyril Ramaphosa’s attention. These are laid out in the just-published volume, Africa and the World: Navigating Shifting Geopolitics.

Co-edited by Institute for Global Dialogue executive director Dr Philani Mthembu and IGD Senior Research Fellow, this writer, the publication analytically critiques the African-Global South terrain and Africa’s current and future prospects as a function of its globally central geography, as the continent is at the epicentre of the world’s strategic landscape.

In effect, positioned as it is in proximity to the Mediterranean shared with Europe, the Afro-Latin South Atlantic and an Indian Ocean connecting it to the Middle East and Asia, the sovereign fate of “Island Africa” is inexorably linked inter-regionally to shifting global geopolitical dynamics. These reflect complex contradictions roiling southern Europe and the Mediterranean extending into the conflicted Persian Gulf via the Red Sea abutting the Horn of Africa entry point into the Indian Ocean Rim arena of rivalries in western Asia. These, in turn, interact with competitive positioning among major world powers jockeying for strategic advantage.

Meanwhile, Africa is experiencing major demographic expansion while population ageing and shrinking is underway in much of the rest of the world. This declining trendline affects China and east Asia as a whole as well as Russia and the transatlantic powers of the US and Europe in the Global North even as they all encroach into Africa’s continental-maritime domain in pursuit of their own competitive national interests. Here, a host of questions must be asked in a reckoning for African leaders regarding continental sovereignty. What is paramount in Africa’s interest for fulfilling AU Agenda 2063, while, at the same time, navigating competitive agendas of external powers with associated inter-regional implications for African peace, security, stability and development? And most of all, Africa’s integration, integration being fundamental to achieving continental strategic autonomy within a rapidly changing global order.

As such, the evolving centrality of Africa within the world’s shifting west-to-east geo-economic terrain challenges the will and capacity of the continent’s leaders to shape its future; this involves factoring in how and on what terms Africa is to inter-regionally relate to Europe, to the Middle East via the Red Sea and to the rest of Asia in implementing the fledgling African Continental Free Trade Area (CFTA). Its potential as the largest trading bloc in the world underlines how Africa could become the world’s fulcrum. Moreover, CFTA potentially converges with Asia’s Regional Comprehensive Economic Partnership and its rival Comprehensive Trans-Pacific Partnership. This calculus also informs southern transatlantic relations with Latin America and the Caribbean.

These are urgent issues in search of an African Long Game in “navigating shifting geopolitics”. Africa and the World emerges just as South Africa begins to chair the AU while sitting as a non-permanent member on the UN Security Council. How and on what terms will Tshwane take over from Cairo in addressing the multiple contradictions challenging Africa’s strategic autonomy viz-a-viz Europe across a shared Mediterranean in the AU’s absence of a functioning regional economic community in the Maghreb enabling the AU to engage the European Union on more equal terms in stabilising Libya?

Begging this question is yet another: resolving the long-standing stalemate over Western Sahara’s self-determination as preconditional to regional integration in the Maghreb extending into Sahelian security equations involving the Economic Community of West African States. However, the destabilising common denominator in both cases – Western Sahara and Libya – is French President Emmanuel Macron’s continuing bid to retain his version of a Eurafrican hegemony partitioning North Africa from Sub-Saharan Africa. As AU chair, will President Cyril Ramaphosa do a soft-shoe shuffle on these high stakes?

Paris’s alignment with anti-Arab Spring Egypt and United Arab Emirates (UAE) in their proxy war against the UN-recognised Libyan Government of National Accord (GNA) is of a piece with its backing Morocco’s claim to Western Sahara, thereby preventing operationalising of the Arab Maghreb Union (UMA) as AU’s regional economic community bordering the southern Mediterranean. Would there be a need for a G5 in the Sahel if there was an AU functioning UMA? Would there be the level of instability in a Libya wracked by internationalised civil war were there a functioning UMA?

These questions extend into the Horn of Africa; this is where some of the same forces geopolitically aligned against the GNA in Tripoli threaten transitions of democratising regional stability in Sudan and Ethiopia interacting with Nile contestation over the Ethiopian Grand Renaissance Dam, all against the backdrop of Persian Gulf hegemonic bids for Northeast African-Red Sea dominance by UAE and Saudi Arabia. This interregional power struggle, in turn, implicates broader sectarian geopolitical Sunni-Shia fault lines between Saudi Arabia and Iran while Turkey and Qatar are ranged against Egypt and UAE in Libya’s civil war.

So, how South Africa navigates Libya during its AU tenure, while revisiting the need to bring to closure contestation over Western Sahara intimately ties in with similar dynamics in play in the Horn of Africa, both interregional conundrums expertly addressed in Africa and the World: Navigating Shifting Geopolitics

While the pace of events pertaining to Libya on the one hand, and the Horn of Africa on the other, reflect a fluidity beyond the scope of such a work, the chapters addressing these interregional domains provide timely contextual frameworks for anyone interested in keeping abreast of the geopolitics of these regions for understanding how they challenge Africa’s overall continental integrity. In the process, they amplify the continental-maritime nexus problematising African integration along its diverse regional perimeters and inter-state hinterlands influenced by external actors intruding into its encircled landscape.

Hence, the “Island Africa” predicament offered up as a conceptual analytical framework for understanding how global geopolitical dynamics impinge on and challenge Africa’s continental sovereignty, and why a “zone of peace and co-operation” geostrategy may require extensive brainstorming in addressing Africa’s predicament in the Mediterranean and in and along its Indian Ocean littoral.

Here, Indian as well as South African-based critical perspectives are articulated. Whereas the Zone of Peace and Co-operation in the South Atlantic is problematised from an Argentine perspective, this multilateral platform forms a basis for imagining interregional multilateral options that might suit different shifting geopolitical circumstances in the Mediterranean and the Indian Ocean.

At least in the latter case, there exists the newly launched Council of Arab and African States bordering the Red Sea initiated by Saudi Arabia. Yet, due to its already evident contradictions, it may still require a broader interregional zone of peace and co-operation template as a multilateral dialoguing framework complementing the Indian Ocean Rim Association and the Indian Ocean Naval Symposium while catering to Africa’s unique continental-maritime security interest.

While Libya has become “ground zero” in the North African saga, in the process eclipsing Western Sahara’s fate, can South Africa credibly execute its AU tenure without engaging the EU in an effort to jointly devise a more comprehensively Eurafrican multilateralism addressing the security interests of both continents? Within this equation, Maghrebian regional integration within the AU has to be acknowledged as in Europe’s security interest as well as Africa’s beyond the immediate aspirational Berlin outcome regarding an enduring cease-fire in Libya and an enforced arms embargo.

This means the South African AU chairmanship will have to engage the EU on a twining of Sahrawi self-determination in activating the Arab Maghreb Union as well, and extending its remit into the Sahel. As such, stabilising Libya represents but the tip of the iceberg of extending Island Africa’s continental sovereignty to the Mediterranean. Navigating shifting geopolitics amid Africa’s increasingly global centrality, therefore, looms front and centre on South Africa’s foreign policy agenda in 2020. DM

Francis A Kornegay Jr is senior research fellow at the Institute for Global Dialogue associated with the University of South Africa and co-editor with IGD executive-director, Dr Philani Mthembu of the forthcoming Africa and the World: Navigating Shifting Geopolitics published jointly by Jacana Publishers with the Mapungubwe Institute of Strategic Reflection.