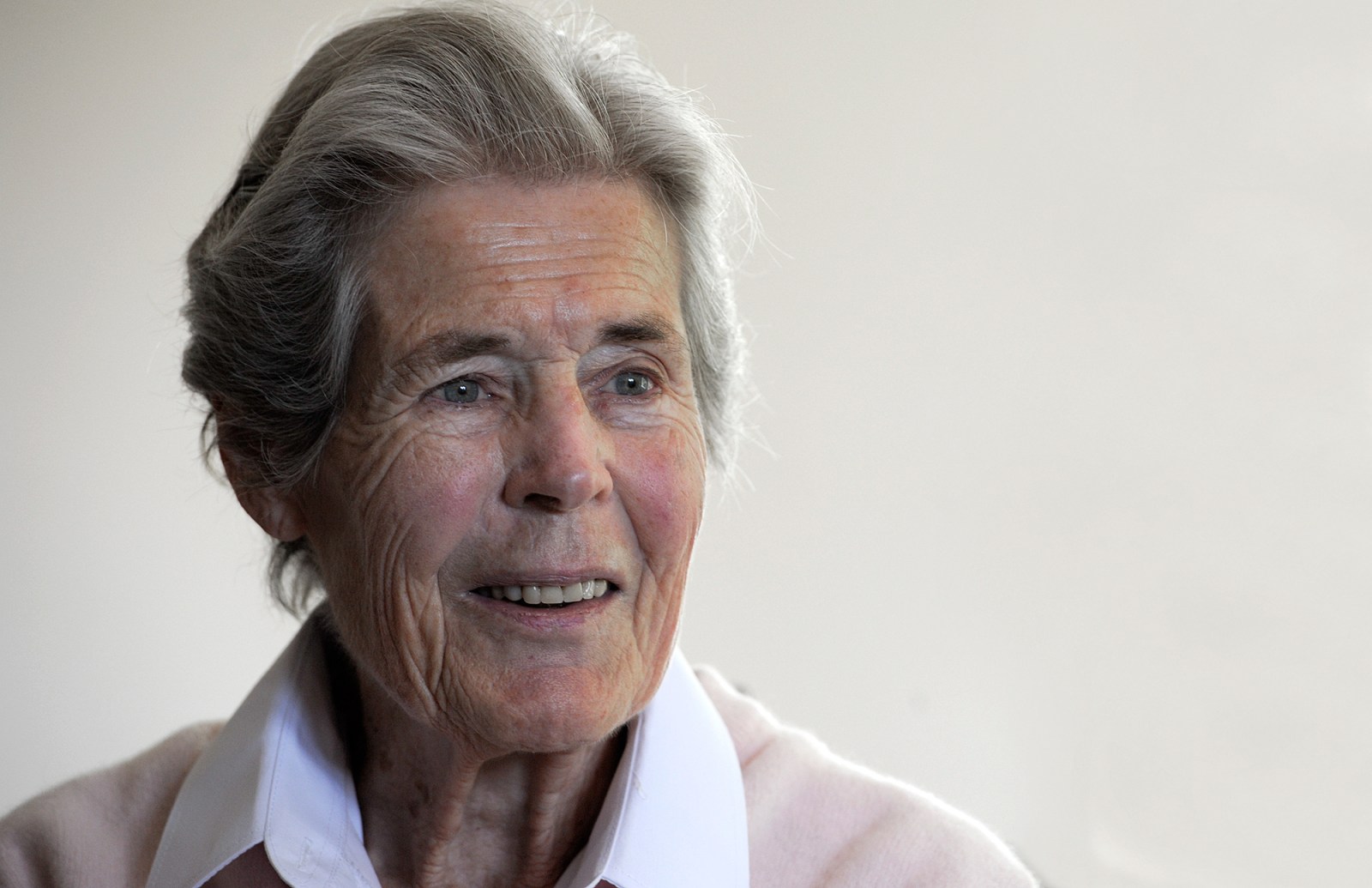 In a week where the Neil Aggett inquest is in the headlines and anti-apartheid activists Barbara Hogan and Frank Chikane testify about the cruelty of the murderous state machinery at the time, it is perhaps fitting to remember another activist who turned 80 this month — Black Sash royalty Mary Burton.

When Mary Burton arrived in South Africa in 1961, she was known to ask uncomfortable questions. Questions that challenged the then apartheid status quo: the Group Areas Act was being enacted, with forced removals underway.

From 1986 until 1990 she would become president of the white women’s resistance organisation, the Black Sash. In 1995, former president Nelson Mandela appointed her to the Truth and Reconciliation Commission (TRC) – one of 17 commissioners, she served on the Human Rights Committee.

What is her foremost question to South Africa’s present government, under President Cyril Ramaphosa?

“What will they do to make reparations for those who suffered so much in the past?” says Burton. “Because without something being done – both symbolic and real – reconciliation is going to be very difficult.”

While the government may argue that changes are being made – Burton says it is happening too slowly, and without tangible results for the country’s poor.

“I feel more hopeful with the new government,” she says. “What with competent people slowly, terribly slowly, being put into place. But it’s awful how long it takes. Getting rid of people who are – or have been – complicit in corruption seems to be difficult to do. I suppose there has to be proof, and that takes a long time. But there doesn’t seem to be enough urgency about the economic and social conditions of the poor. I think that is the trouble.”

She notes that since 1994, economic reform policies have benefited an elite few and these benefits are not trickling down. “Well, trickle-down never seems to work,” she adds.

Is there a better alternative to capitalism?

“Well, it’s very difficult because socialism hasn’t really made a big difference in many parts of the world. I just think an awareness needs to be instilled in people who have wealth, that it is to their benefit to share some of that wealth. That if they want safety and security, it costs you. It’s all a question of people stealing at the top, their wealth is stolen wealth. It’s taken from the lives of the poor. So whether the wealth comes from mining or natural resources exploitation, agriculture and so on, people make fortunes at the cost of other people’s labour. The discrepancies are too great. It can’t possibly be just.”

Mary’s eyes are very blue, her gaze level and arresting. She is speaking from the Rondebosch lounge of one of her four sons, while her own nearby house is being renovated. She voices frustration at the ongoing home improvements. “Picking bathroom taps is of little interest to me, but it has to be done,” she says.

Born in the Argentinean capital of Buenos Aires in January 1940, Mary studied in Lausanne, Switzerland, after school. She met Cape Town businessman Geoff Burton during a skiing holiday in Austria. After working as a journalist at an English-language newspaper in São Paulo in Brazil, she visited Cape Town where they decided to get married.

“It was 1961, and so much was happening,” she recalls. “My new parents-in-law were completely oblivious and quite prejudiced in many ways, as so many white South Africans of that generation were. So the removals were beginning to become a reality. And it all seemed so ridiculous to me, to move people out of established neighbourhoods in the interest of a strange policy – when there was no conflict, there was no tension between people living together.”

Despite her misgivings, Mary never left South Africa. Instead, she threw her petite frame behind defying the norm – finding purpose in fighting the injustice of her new home.

When first founded in 1955, the Black Sash had up to 20,000 members signing petitions and demonstrating around the country. But it was tough, with many women forced to drop out. By the time Burton joined, the organisation’s number was about 2,500.

“At the time, it just seemed like the right thing to do. I was fortunate in that my husband supported me. But my parents-in-law were very anxious. And that was something that really had to be negotiated. My mother-in-law had known some of the women who first joined the Black Sash, but she said to me, you know, that they left because it was getting very communistic. I mean, there was nothing communistic about the group. But that was the perception – very clever propaganda on the part of the government. And anything communism was just terrifying, people were absolutely terrified.”

At Black Sash meetings, they would agonise over the wording on placards – on how to best convey the evils of apartheid to a blinkered public.

“I gradually came to understand the only way things would change was if voters were educated enough to understand what was happening, and would vote for legislative change,” she says.

One of her earliest Black Sash memories is of a silent demonstration in Kalk Bay. “It was a beautiful day. The sun was shining on the sea, you know, the tourists and the passers-by were all there. And here was this big, big group of Black Sash members, all along the pavement. Maybe a 100, or more. I’ve never forgotten that experience. And the different reactions of the people who walked past; hostility from white people, encouragement from the local population there, the fishing community.”

Burton speaks fondly of the late Noel Robb, one of the organisation’s pioneering members. “They were educating us, the older members. So I remember going with Noel Robb, who was such a strong personality, to visit the migrant labour hospitals in Langa.”

She pauses, choosing her words. “To be confronted with the way in which black men had to live their lives. In those terrible cramped quarters, often with families illegally there. Those single-quarter hostels. They were terrible places. Just terrible. It was the 1960s, these were men who worked in factories, at the harbour, on the docks.”

In the 1980s, Burton joined public marches where inevitably people were killed in clashes with police. Then, along with other Black Sash members, she would attend their funerals.

In March 1985, three months before his murder, Matthew Goniwe – one of the Cradock Four – addressed the Black Sash at their national conference. “At Black Sash we knew Goniwe,” says Burton. “In our memories, a very fine man.”

In January 1997, details of Goniwe’s murder was revealed before the TRC. Over 20,000 victims voluntarily filled out statements heard by the commission’s Human Rights Committee.

Looking back, Burton says she was fortunate, being able to return to her family after TRC hearings.

“The daily hearing of the stories, I think it took everybody on the TRC into some very dark places,” she says. “Of course, it was very hard. I thought I knew what I was going to hear, but I was shocked.

“However, I came home at night to a family, most of my days. There were people who worked for the TRC who did not have that kind of support. And I think many of them carry much more trauma from that time than I do. The problem was, hearing so many stories. You might not have paid enough attention to each one, the attention each and every one deserved.”

At the time Burton donated part of her commissioner’s salary to the Black Sash, and famously declined the use of an official car. “At the end of my life, they will put on my tombstone: ‘She did not take a government car!’” Mary joked in 1998, in response to questions from MacLean.

“In the 1960s, this man, then a young photographer, would just walk around the village. The kids in the streets followed him; they all got to know him by name, taking him into their houses, where he was fed by the local mamas and so on. And now these photographs are in this book. Siona went back to the families he got to know, interviewing the next generation on the impact the removal had on them. It’s incredibly powerful. There were not many dry eyes.”

At the launch, she got speaking to Professor Murray Leibbrandt, a scholar in South African inequality and poverty at the University of Cape Town.

“Well what we were talking about, really, is the task of rebuilding. How do we get rid of the rage that is spilling into our society now? So many things are interlinked – the violence and gender issues and all of that. It’s part of our social mix. One of the ways is obviously through socioeconomic policies that will uplift people and give them a chance in life.”

In 1994 the Black Sash restructured. Management was handed over to professionals, who today operate litigation and advocacy advice centres in Cape Town, Johannesburg, Port Elizabeth and Durban. Burton is still involved as the organisation’s patron.

“I do think about it a lot,’ she says. “It’s intellectually interesting to think about what might be done, to try and find solutions.”

In the thick of TRC hearings two decades ago, Burton told a journalist: “You have no right to harden your heart in this country.”

Confronted by her own words today, she nods: “Yes.” MC