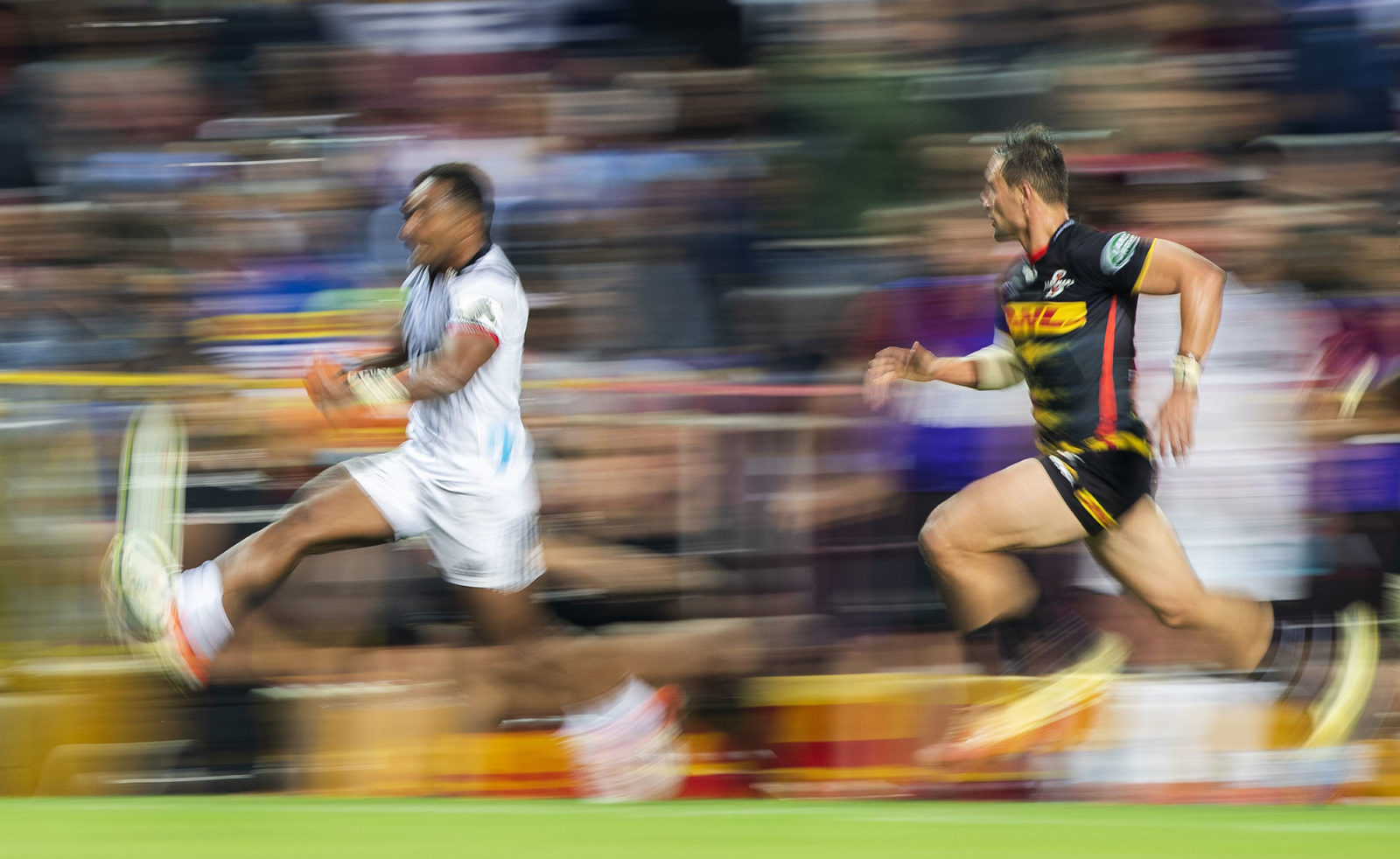 Who can stop the Crusaders in Super Rugby 2020 as they go for a fourth consecutive title and 11th overall? South Africa's four teams go into the tournament with high expectations following the Springboks' RWC 2019 win. In the photo, Sevuloni Reece of the Crusaders (L) chips the ball as he is chased by JJ Engelbrecht of the Stormers (R) during the Super Rugby match between the Crusaders of New Zealand and the Stormers of South Africa in Cape Town, South Africa, 18 May 2019. (Photo: EPA-EFE / Nic Bothma)

As always, Super Rugby is a mouth-watering prospect for rugby fans globally, but for South Africans, it is difficult to see it being anything more than another year of ifs and buts.

In a post-World Cup year, SA Super Rugby franchises always suffer massive player departures as the lure of pounds, euros and yen makes it impossible to keep the best talent at home. This season is no exception as South Africa’s four Super Rugby franchises – the Bulls, Lions, Sharks and Stormers – go into the tournament high on hope but short on experience and depth.

New Zealand’s Crusaders are on course for an 11th title and it is unlikely that a team from South Africa has the sustained quality to stop them over the six-month-long campaign.

The Bulls are the only South African team to have a coach who has led at this level before – Pote Human. The other three teams are all under first-year rookies trying to make their mark.

Despite the Springboks’ success in winning Rugby World Cup 2019, the reality is that only 16 of the 33 players used in Japan last year will be involved in Super Rugby, underlining the player brain drain.

The converse to that situation is that 2020 presents the coaches and many young players opportunities to become household names and future stars.

As always, Super Rugby is a mouth-watering prospect for rugby fans globally, but for South Africans, it is difficult to see it being anything more than another year of ifs and buts.

The three-time champions ended the 2019 campaign of Super Rugby as South Africa’s top finisher, finishing fifth as the SA franchises all had largely forgettable campaigns.

They have since been hit by an exodus as some of the best players and leaders in the team have left for greener pastures. This includes the reliable boot of Handre Pollard and the bullish strength of Lood de Jager.

Having said that, they still possess some potent weapons in the arsenal. The ever-reliable boot of serial winner Morne Steyn is back in Pretoria for the first since departing in 2013.

Although the captaincy has been handed to Burger Odendaal, Steyn, with his wealth of experience will be one of the leaders in the team. Two of the 2019 Rugby World Cup winners, fullback Warrick Gelant and prop Trevor Nyakane will also be key to the success of the team.

Unlike the other South African franchises, the Bulls have the luxury of some continuity in terms of head coaches. They retained Pote Human, who was their head coach last season. Over and above this, Human is an old boy at the team, having been assistant coach when the Bulls won the competition in 2007.

The Bulls kick off their campaign against SA rivals the Sharks, and they will be confident of hitting the ground running with the fixture. They have secured eight wins and a draw in their last nine matches against the Durban outfit.

After the trip to Durban, they will travel to Cape Town to take on the Stormers, in what should be another tough battle away from home. The good news for the Pretoria side is that they have managed to avoid the 2019 champions, the Crusaders, in the roster; the New Zealanders trounced them 45-13 on home soil last year.

Human’s team will be hoping to bring back the glory days and win their fourth title, and their first in 10 years but that scenario remains highly unlikely.

Despite losing some crucial cogs in their machine, the Lions managed to hold on to one of their most experienced and key players, Elton Jantjies. The Springbok flyhalf said at the launch of Super Rugby 2020 that he stayed because he felt he has unfinished business with the Joburg side. They handed him the captain’s armband as a reward for his loyalty.

The Lions themselves will feel that they have unfinished business in Super Rugby, having finished runners-up three years on the trot between 2016 and 2018. They will hope that 2020 is the year where they finally go all the way, and have recruited the young and dynamic Ivan van Rooyen to attempt to lead them to glory.

The 37-year-old Van Rooyen has risen through the ranks during 10 years at the Lions, starting as coach of age-limit teams and working as the conditioning coach before assisting previous coach Swys de Bruin.

Along with their young coach, the team has some exciting, young prospects. Players such as Hacjivah Dayimani, Vincent Tshituka, Tyrone Green and Mannie Rass.

They will have to do without Cyle Brink, their powerhouse loose forward, who sustained a serious injury that will, in all likelihood, keep him out of the first part of Super Rugby. Another notable absentee is wing Aphiwe Dyantyi, who will twiddle his thumbs from the sidelines due to an alleged doping violation.

A major plus for the Highveld side is that they will play their last nine matches in South Africa, which could be crucial for sneaking into the playoffs.

Another South African franchise with a new coach in Sean Everitt and another on paper that appears to have a good chance of doing well.

Despite saying goodbye to some quality players such as Tendai Mtawarira, Jean-Luc du Preez and Akker van der Merwe since last season, there is a healthy smattering of quality in the Sharks team.

But, like most other South African teams in the tournament, it’s the depth of experience and high-quality players that could hurt the Sharks as injuries eventually and inevitably mount up.

Everitt is untested at this level and while he has a backline that could cause some real problems for opposing defences, his pack is youthful and light in key areas. There is a dearth of world-class locks and loose forwards, while the hooker situation is also a worry.

In these austere times, Everitt has been able to make only a smattering of high-profile signings and much of his squad has come through the Sharks’ youth systems.

If the pack can give the backline a fighting chance then the Sharks could be one of the surprise packages of the campaign, especially as under Everitt they appear to be moving away from a collision-based game that has marked their play for the past five seasons.

Super Rugby though, is a tough learning ground and given the lack of experience in the pack, the Sharks are unlikely to make a push for the title and a wild-card play-off berth is likely to be their limit.

Position in 2019: 10th overall and fourth in SA Conference.

It will be an emotional campaign for the Stormers in 2020 as it marks the end of a 130-year association with their Newlands home. In 2021 the team moves across town to the modern Cape Town Stadium in Green Point. Despite the trauma of the situation for traditionalists, 2020 is a season that represents a real opportunity for the Cape Town franchise.

For the first time in three seasons they have a decent fixture list in the first half of the season, which offers the chance to gather momentum with seven home matches in their first 10 games. There are also seven Rugby World Cup 2019 winners in the squad, which includes halfbacks Herschel Jantjies and Damian Willemse.

It’s on the youthful shoulders of those two players that the success or otherwise of the Stormers season will hinge. The pack, with a swathe of Springboks such as captain Siya Kolisi, current World Player of the Year Pieter-Steph du Toit, Steven Kitshoff, Frans Malherbe, Bongi Mbonambi, Wilco Louw and Scarra Ntubeni will provide a granite-like foundation.

It’s behind the scrum that the Stormers are creaky. Jantjies and Willemse can be world beaters on their day and with experienced Welsh centre Jamie Roberts in the midfield and Dillyn Leyds at fullback, the spine of the team is impressive. While the pack has depth though, the backline is thin, and if any of those frontline players are injured the Stormers will look frail.

Coach John Dobson is also under instruction from the Stormers hierarchy to secure a semi-final berth, or else. It’s a lot of pressure for a man in his first season as head coach at this level in charge of a team that has not reached the last four of the tournament since 2012.

Dobson is a coach who believes in old-school values and wears his heart on his sleeve. It’s an approach that makes him one of the most interesting coaches in the competition but also one of the most emotionally susceptible to the pressures and vagaries that the competition will throw at him. He is a rugby romantic at heart and Super Rugby is seldom about romance.

If nothing else, the Stormers campaign will be worth watching closely because of their quality squad and intellectual coach. The campaign has the potential to finally end the trophy drought in Cape Town, but it is more likely to end in glorious tatters.