On the trail of dinosaurs in the Free State 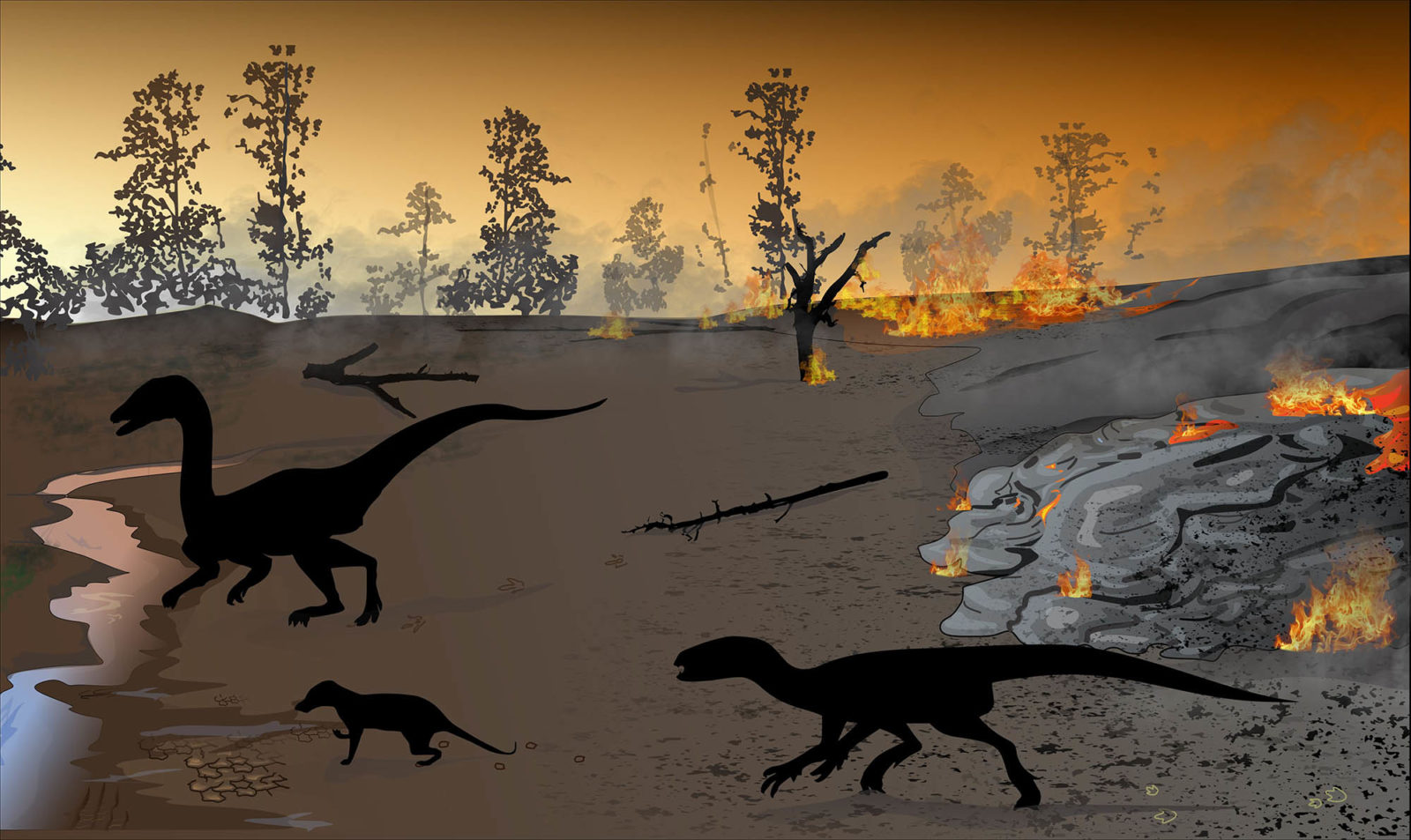 A reconstruction of what the environment near Clarens in the Free State may have looked like 183 million years ago, when three early dinosaurs left their footprints near a stream. (Graphic: Bordy et al, 2020)

Scientists have discovered remnants of an ancient ecosystem in the Free State that tells a tale of survival in a time of extreme environmental stress.

A trackway of ancient spoor near Clarens in the Free State tells the story of an ecosystem hanging on, at a time when the planet was about to enter a mass extinction. The three species of animals that left this spoor were living in a world of intense volcanic activity that spewed out molten lava and choked the atmosphere with poisonous gas. This is believed to have triggered one of the great mass extinctions.

In an academic paper in the journal PLOS ONE, Associate Professor Emese Bordy of the University of Cape Town and her colleagues described three unique prints and suggested they reveal how ecosystems can respond to times of extreme environmental stress.

What the team of scientists found on a farm near the Golden Gate Nature Reserve were five trackways that contained 25 footprints believed to be 183 million years old. They included a small species of synapsid, a group of animals that included early mammals; a large bipedal dinosaur that was most likely a carnivore, and a quadruped herbivore. The scientists believe the herbivore is a previously unknown species.

The tracks were preserved in sandstone which was sandwiched between the remnants of two layers of lava flows. It points to a time when there was a lull between the massed volcanic activity that resulted in huge lava flows across southern Africa.

“The broader environment was a land of fire,” says Bordy. “But when you look at the immediate environment, and you zoom in and look at the properties of these sedimentary rocks, they tell us that these tracks were made where there was a temporary stream that was flowing at very high velocity. So, it indicates that it was an environment with water.”

Also in this layer are other signs of an ecosystem. There are traces of plant life, prehistoric burrows and invertebrates. Bordy points out that this shows there was water, plants were growing and animals were moving about.

The footprint site was only recently rediscovered. Bordy had found a photograph of a dinosaur footprint in an unpublished Masters dissertation from 1964. In 2018 she gathered her “tracking team” and headed out to the farm mentioned in the dissertation. After many hours of searching they found a print, and then more.

The study of dinosaur footprints and other trace fossils, or ichnology, is still new to South Africa.  New technologies, like drones, are helping to locate and understand these ancient remnants.

“We are finding more trackways nowadays, because we’re doing more fieldwork and we are targeting areas which haven’t been explored properly before,” says Professor Bruce Rubidge of Wits University, a palaeontologist who wasn’t involved in the study. “This is an exciting area to explore for the future.”

“We did some more tracking in Lesotho, in October and what we found is unique and will add more to the picture,” Bordy says. DM