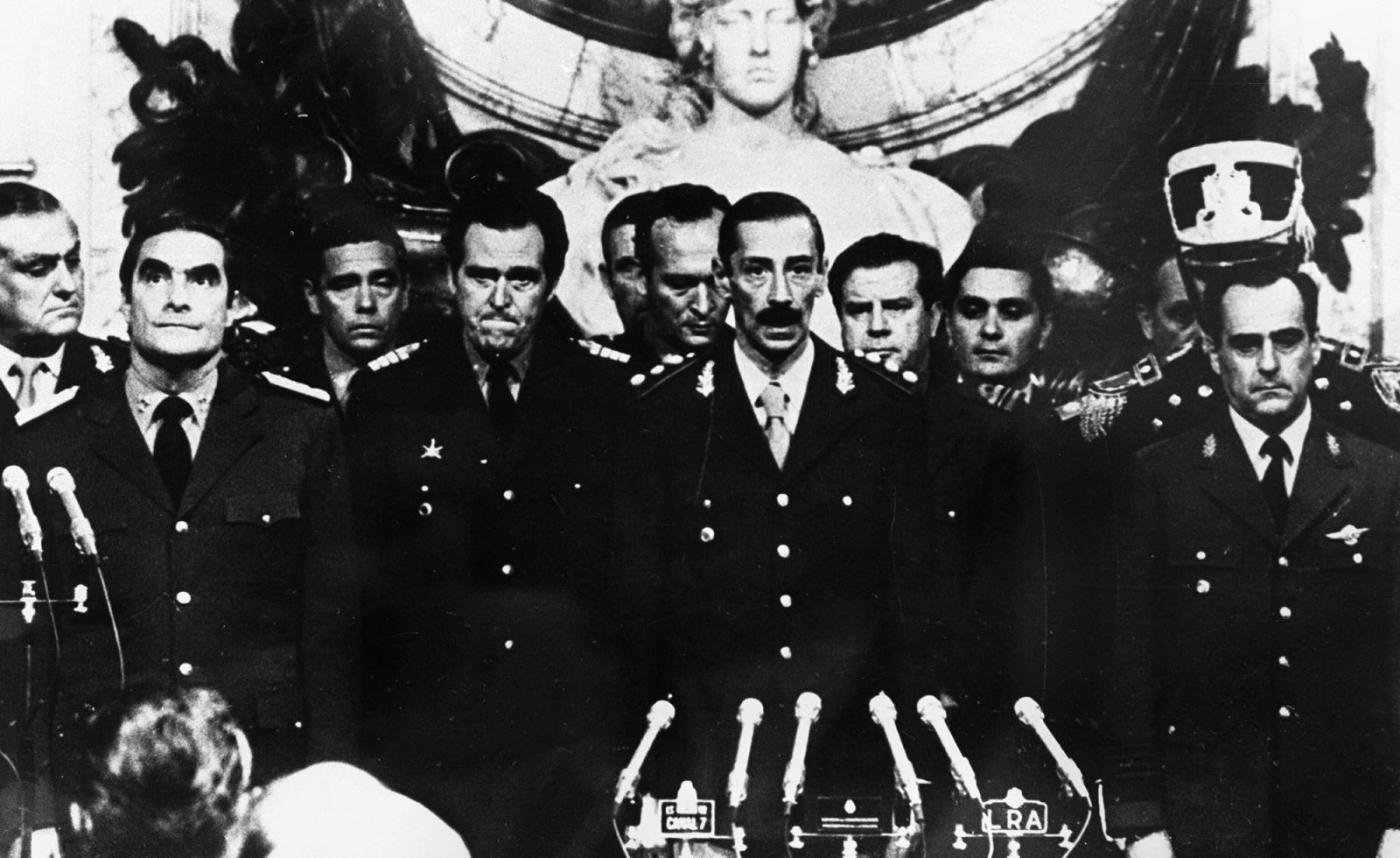 Former British prime minister Margaret Thatcher is often lauded in the UK for standing up to the Argentine military junta during the Falklands War, but declassified British documents show that her government had far more cordial relations with this regime than her wartime rhetoric suggests.

British ministers and diplomats sought to enhance commercial and political relations with the Argentine dictatorship which took power in Buenos Aires in a military coup in March 1976. The then-prime minister, Margaret Thatcher, held a friendly meeting with a leading member of the junta in Downing Street in 1980 while Britain’s ambassador in Argentina regarded the promotion of human rights as an “irritation”.

The UK government even invited to London the former head of the Argentine Navy, who was responsible for the torture and disappearance of thousands of people in Buenos Aires.

Viewing arms exports to the military junta as a priority, the Thatcher government violated its own guidelines on arms sales, approving licences for weapons that could be used for internal repression and that posed a threat to the Falkland Islands. Just four days before Argentina’s invasion of the Falklands in April 1982, the British government was trying to sell the regime bomber airplanes.

The scale of the atrocities committed by the Argentine military government of 1976-83 was greater than any South American dictatorship in history. Thousands of people were tortured in secret detention centres, their bodies dumped in mass graves or thrown from military helicopters into the Atlantic Ocean.

A truth commission documented 8,960 cases of people who simply “disappeared”; Argentine human rights groups believe the number could be as high as 30,000.

The British Foreign & Commonwealth Office (FCO) had evidence of abuses being perpetrated within months of the 1976 coup. By the time Thatcher came to office in 1979, the barbaric nature of the junta was clearly known to the outside world.

Nevertheless, her government immediately restored a British ambassador to Buenos Aires and ended a refugee programme for Latin Americans fleeing persecution, which had been introduced by the previous Labour government.

The junta’s finance minister, José Martínez de Hoz, was invited to meet Thatcher in Downing Street on 5 June 1980. Martínez de Hoz was the architect of the regime’s “free-market” economic strategy and was a great admirer of Thatcherism.

Planned as a brief courtesy call, the meeting overran, according to declassified FCO documents. Martínez de Hoz described his policies as “very similar to those being pursued by the prime minister”. Thatcher later wrote to him saying she had very much enjoyed the meeting.

Martínez de Hoz also had a cordial meeting with Conservative trade ministers Cecil Parkinson and John Nott, which was – a civil servant noted —  “very much a meeting of minds”.

Meanwhile, the Chancellor of the Exchequer, Geoffrey Howe, told Martínez de Hoz, who represented a regime that had banned independent trade unions and killed hundreds of shop stewards, that “in the UK, trade unions had become one of the major fossilisers of the economy”.

On his return home, the Argentine finance minister professed himself “delighted” with the “welcoming atmosphere” he had encountered during his visit to London.

In total, Martínez de Hoz made four visits to the UK during the dictatorship years, under both Labour and Conservative governments. He was feted by British business executives including representatives of British Aerospace (now BAE), GEC, Shell, Rolls-Royce and Plessey.

He was also lionised by British diplomats. The British chargé d’affaires in Buenos Aires described Martínez de Hoz as “the most encouraging and attractive personality produced by Argentina since the war”.

Martínez de Hoz resigned in 1981 after his experimental policies sparked one of Argentina’s worst financial crises in modern history. After the fall of the dictatorship, he was indicted for human rights abuses. Rearrested on charges of kidnapping and extortion in 2010, he died under house arrest in 2013.

The ‘irritation’ of human rights

The new British ambassador, Anthony Williams, who arrived in Buenos Aires in February 1980, wrote in one of his first diplomatic reports: “Argentina is a very interesting market, as British businessmen are coming to realise.”

He later added: “Five years of sobering military administration has made Argentina a much more possible country to deal with.” But he lamented that, “The need to be sufficiently active on the human rights front to satisfy public and parliament opinion in the UK will still be a continuing, though minor, irritation.”

David Joy, a counsellor in Britain’s embassy in Buenos Aires, was even more effusive about the dictatorship, writing in March 1982:

“Although I am all for human rights… I am already beginning to have more than a sneaking suspicion that the country is more likely to progress materially under the present regime which re-established order and government, than any government elected by the rabid communist/left-wing Peronist taxi driver who drove me to the office this morning.”

He added: “It does seem to me that the best policy for an Argentine government today to pursue is that of gradual – even very gradual – liberalisation. The pure air of democracy, applied too early, could well result in a further bout of inebriation.”

As part of the drive to do business with the junta, Cecil Parkinson visited Buenos Aires in August 1980, the first British minister to visit Argentina since the coup. Parkinson had a personal audience with the head of the junta, General Jorge Rafael Videla, and met all of the regime’s key economic ministers.

British officials had taken care to ingratiate themselves with their hosts, suggesting Parkinson give a book outlining Conservative party philosophy, signed by Thatcher, to the Argentine trade minister. Officials noted that the visit took place “in a notably cordial atmosphere”. The following year, a second British minister, Peter Walker, visited Argentina.

Both Thatcher’s government and the Labour governments of Harold Wilson and James Callaghan (1974-79) sold arms to the Argentine dictatorship.

The Lynx helicopters (1979), the second Type 42 destroyer (1980) and the Sea Dart missiles (1981) were delivered to the junta under the Thatcher government.

Just before leaving office in 1979, the Labour government, under pressure from human rights groups, introduced guidelines recommending that licences should not be granted for arms that could be used for internal repression or that posed a threat to the Falkland Islands – a former British colony (now a British Overseas Territory) in the South Atlantic, claimed by Argentina.

Soon after becoming prime minister, however, Thatcher told her ministers that “a more determined effort must be made to sell more defence equipment overseas” and a cabinet committee agreed to remove “political constraints” on arms sales.

When recommending approval for modification kits to enable Oerlikon guns to be fitted to Argentine armoured cars, the head of the FCO’s Latin America department, Robin Fearn, wrote in March 1981:

“Armoured personnel vehicles have clear implications for human rights and we might be criticised if we were to be involved at any stage in their construction or armament. It is, however, unlikely that our involvement would ever become known.”

Most of this equipment was not delivered to the junta because arms trading was frozen when Argentine forces invaded the Falklands. Yet the licences had all been given ministerial approval and clearly violated the UK government’s own guidelines.

Just four days before the invasion of the Falklands, on 29 March 1982, a British military attaché in Buenos Aires informed London that he planned to meet the secretary-general of the Argentine air force the following week to discuss the sale of bomber aircraft.

He wrote that the regime had “an interest in acquiring [an] extra squadron of bombers during the 1980s” and that the “relationship with BAE has undoubtedly improved”. He added: “If all goes well here BAE could move further up the class in time.”

The Thatcher government also invited several Argentine military officers to Britain, including one of the regime’s worst human rights abusers.

Admiral Emilio Massera, the head of the Argentine Navy, was responsible for the torture and disappearance of thousands of people at the notorious naval mechanical school in Buenos Aires. He had retired in 1978 but remained an influential figure on the Argentine political scene.

Massera met Foreign Office minister Nicholas Ridley in London in October 1979. The Foreign Office hosted a lunch for Massera at the Savoy hotel and among the invitees was the British Admiral of the Fleet, Peter Hill-Norton. “Massera seemed a little taken aback at the effort to which we had gone,” reported one Foreign Office official.

Large Argentine military delegations attended the Farnborough air shows and British army exhibitions in the Thatcher years and several Argentine officers were trained in Britain: more than 80 attended courses in 1980 and 67 in 1981.

When an FCO official enquired on 30 March 1982, three days before the invasion of the Falklands, whether such training places should be withdrawn to convey a signal of displeasure to Argentina, the defence department of the Foreign Office replied: “Any action in this area would risk damaging UK commercial interests.” DM

Grace Livingstone is a journalist and an affiliated lecturer at the Centre of Latin American Studies, University of Cambridge, UK, and the author of Britain and the Dictatorships of Argentina and Chile, 1973-82 (Palgrave Macmillan, 2018), paperback edition to be published in March 2020.