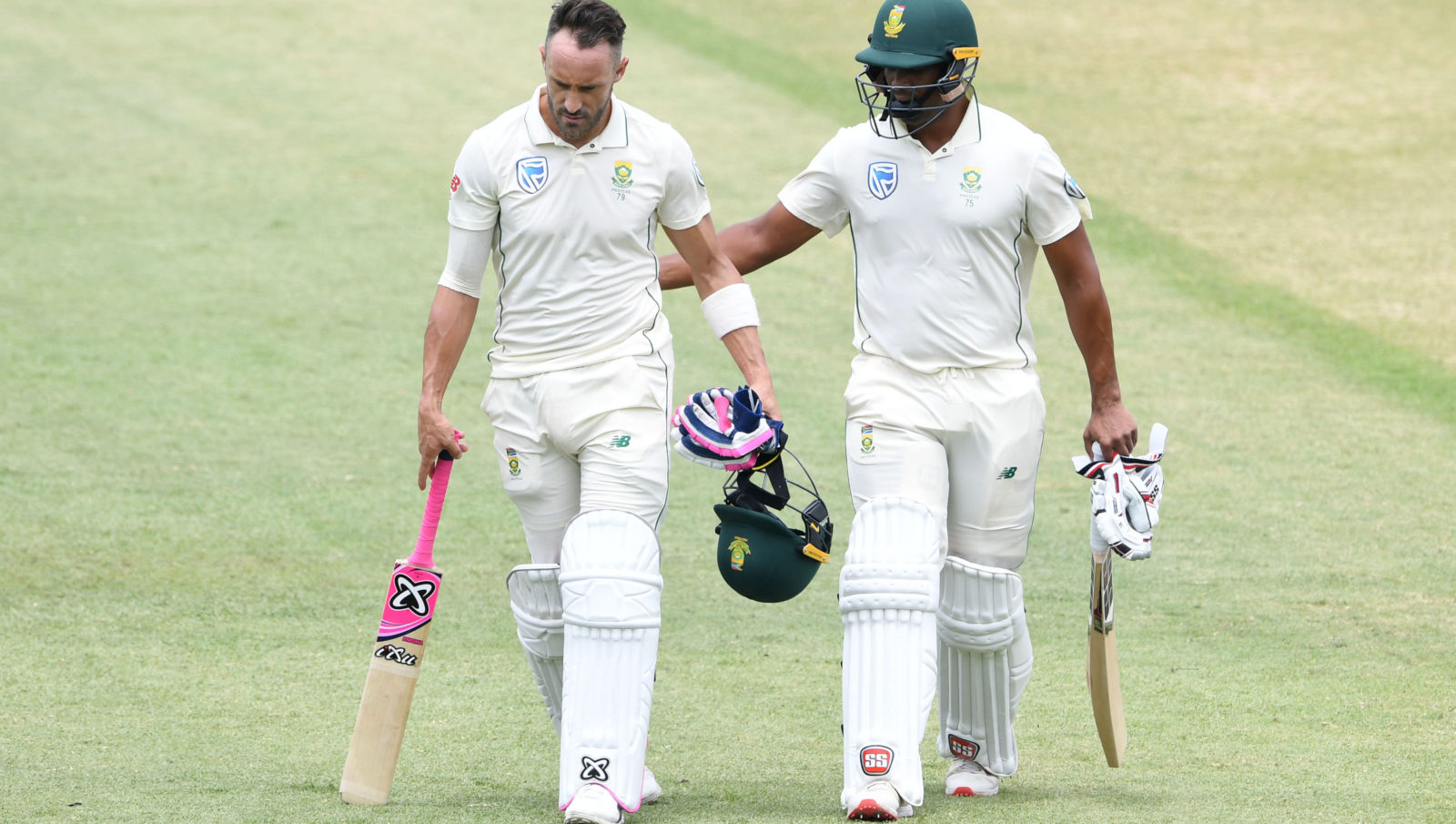 DURBAN, SOUTH AFRICA - FEBRUARY 15: Faf du Plessis and Vernon Philander of the Proteas go to much at 227 for 5 and with a 271 lead during day 3 of the 1st Test match between South Africa and Sri Lanka at Kingsmead Stadium on February 15, 2019 in Durban, South Africa. (Photo by Lee Warren/Gallo Images)

With Faf du Plessis possibly having played his final home Test and bowler Philander his last ever Test during the 191-run defeat against England at the Wanderers, the thread connecting the current crop of players to the Proteas’ most successful post-isolation era has been severed.

There were famous series wins in Australia and England and brilliant individual performances along the way. It all seems so distant now.

The current crop is wedged near the basement of Test cricket with a ranking of seven after the 3-1 home series loss to England. A golden era of South African cricket has long since lost its gloss, but the series against England emphatically drew a line under past glories and the urgent need to rebuild and overhaul just about everything.

The rebuild is not only needed on the field, but in the boardroom where an investigation into the careless management of suspended chief executive Thabang Moroe is in its early stages.

Sponsors have walked away from the game, board members have resigned with parting shots about incompetent management and possible financial impropriety.

The welfare and structure of the domestic professional game is under pressure and it has been against this backdrop that on field performances have declined.

A part of it is to do with the natural cycle of sports teams, when one generation of successful players moves on. But another part is to do with the management structure of the professional game and inability to adequately prepare for the inevitable void left by the retirements of some of the best players in the history of South African cricket.

All sports teams go through these cycles – you only have to cast your eye to the English Premier League to witness the travails of Manchester United after a dominant era under manager Alex Ferguson.

Under Fergie, Manchester United won 13 league titles and two European Champions Leagues, among other titles in his 27-year association with the club. Since his departure the club is already on to its fourth manager in six years since his departure.

But like United, Cricket South Africa (CSA) has shown that the leadership lacked the foresight and expertise to adequately prepare for a time when the its elite team would need rebuilding. The secret is to have a next crop of players equipped both technically and emotionally for stepping up to the highest level.

On the evidence of the past six months, in which the Proteas have lost eight of their last nine Tests, that clearly wasn’t the case. Those setbacks occurred at the same time as CSA was coming apart at executive level on the back of legal proceedings brought against it by the South African Cricketers’ Association (SACA). Moroe’s unilateral decision to change the domestic structure of the game, further diluting strength versus strength competitions forced SACA into its action and that decision is now under review.

On the field, Du Plessis has indicated he will stay on for two away Tests against the West Indies in July and then reassess his position as Test captain. He has already relinquished the One-Day International (ODI) leadership to Quinton de Kock.

If Du Plessis, as expected, retires from Test cricket after the West Indies tour, it effectively leaves the youthful Kagiso Rabada and De Kock as the totems around which a new generation must be moulded and constructed.

“It feels like you’ve been pushing me that way in the last while,” Du Plessis said in reference to the media when asked if he would resign after the fourth Test against England.

“You don’t make decisions like that when you are emotional or disappointed. I know that right now the results don’t look good and certainly from a personal point of view my results this series have been well below par. In order for us to compete as a batting line-up, you need your big players to stand up.

“It shows you where we are in terms of confidence. It’s time off to get away from cricket and from all the noise, freshen up and then come back for the T20s.”

Philander won’t be around though, ending an illustrious career that yielded 224 Test wickets at a miserly average of 22.32, which is inside the top 40 for bowlers who have played more than 20 Tests. Even though Philander only took eight wickets in the four Tests against England, they still came at an excellent 26.62 average and an economy rate of 2.09. It’s that control and ability to stem the flow of runs, as much as his wicket taking ability that will be missed.

In an age where fast bowlers are revered, Philander showed that control, a touch of seam movement and an immaculate length was more devastating than sheer pace. He also cautioned the next crop of bowlers not to sacrifice those skills at the altar of speed.

“When you don’t have pace you need other skills to come to the party,” Philander said as he faced the media for a final time as a Test cricketer.

“When I started, I played with guys like Charl Willoughby, Alan Dawson, and Charl Langeveldt, who were all skilful bowlers. I could learn from them, I could ply my trade in a unique way. Over the years you learn that the more consistent you can be, irrespective of what pace you bowl at, you will be effective. It showed throughout my career; the effectiveness of being consistent.

It wasn’t just his guile and skill though, it was Philander’s ability to fight and do the unexpected, such as his staggering eight for 78 on Test debut against Australia at Newlands, that set him apart. He learnt to scrap and work for everything he needed on the tough streets of Ravensmead in the Cape Flats where he grew up. Nothing is easy in that environment.

“When you come from my sort of background, there are a couple of other skills that you get brought up with,” Philander said. “Survival is one of them. You always find a way, irrespective of what the conditions are. That’s something I will always be grateful for.”

It’s that attitude that the Proteas and CSA need to take forward in the coming weeks and months, as the business of rebuilding cricket at all levels, becomes the major focus. DM