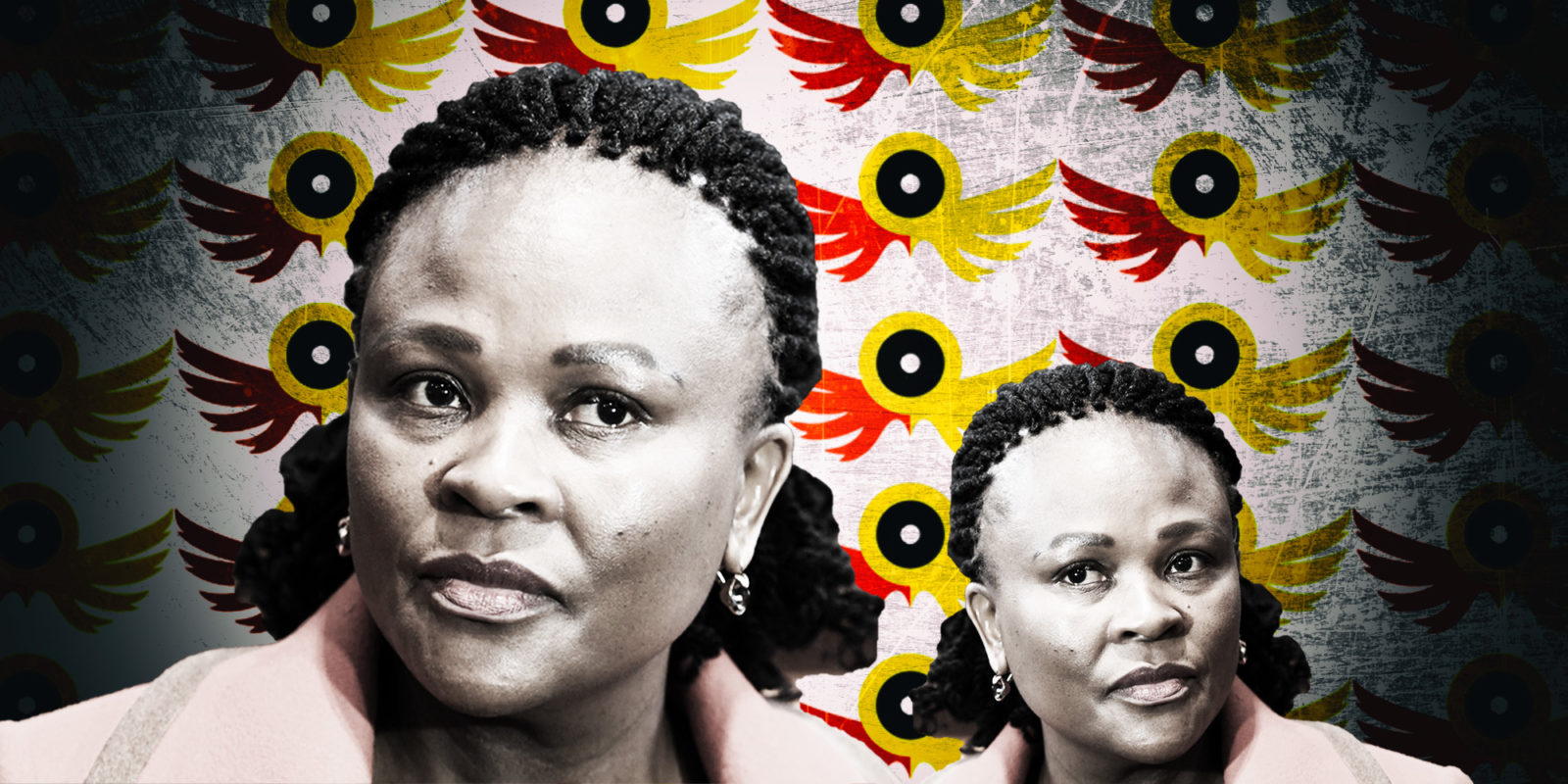 Public Protector Busisiwe Mkhwebane has not taken kindly to the news that the Hawks are investigating a complaint of perjury against her after her flawed investigation into the Reserve Bank’s apartheid-era bailout of Bankorp. After she accused the Hawks of unfairly targeting her, the elite police unit responded on Wednesday denying her claims and suggesting Mkhwebane was ‘courting unnecessary publicity’.

What is the nature of the Hawks’ interest in Public Protector Busisiwe Mkhwebane?

In August 2019, advocacy group Accountability Now laid criminal charges of perjury and defeating the ends of justice against Mkhwebane. The group did so as a result of the Constitutional Court judgment in July 2019 which found that Mkhwebane had conducted an investigation into apartheid-era bank Bankorp (now part of Absa) in an “unacceptable way”.

Of major concern to the court was the fact that Mkhwebane was discovered to have met with both the State Security Agency (SSA) and the Presidency to discuss the investigation. According to her own handwritten notes, in her meeting with the SSA Mkhwebane discussed ways of targeting the Reserve Bank.

Mkhwebane omitted mention of these meetings and also excluded important documents from her final report. Some were similarly not included in the record Mkhwebane placed before the High Court when the report was taken on judicial review, and only came to light during the Constitutional Court proceedings. The Constitutional Court had harsh criticism for Mkhwebane’s conduct in this regard.

Shortly after Accountability Now laid the charges against Mkhwebane, the Hawks confirmed that they were investigating the matter.

Why is it all blowing up again this week?

Mkhwebane raised the matter of the Hawks’ investigation in a media briefing on Tuesday, and said that she would not co-operate.

Mkhwebane said: “I have indicated that I will not provide [the Hawks] with a warning statement.”

A “warning statement” is an optional statement that investigators can invite a suspect to give in order to provide a response to the allegations against them.

Mkhwebane expressed confusion about why this matter was being taken so seriously by the Hawks.

“I refer a lot of serious matters of criminal nature to the Hawks,” she said. “Such matters hardly ever receive attention, and yet there seems to be a prioritisation of trivial matters such as the one in question, which can under no circumstances be referred to as a ‘priority crime’.”

In Mkhwebane’s view, the Hawks’ interest in this matter is related to the “abuse of state institutions to settle scores”.

She views the Hawks’ actions, SARS’ recent income tax audit of her affairs and Parliament’s commencement of removal proceedings against her as all part of a state-sanctioned witch hunt targeting her.

Mkhwebane believes that this is the result of adverse findings she has made against President Cyril Ramaphosa and Public Enterprises Minister Pravin Gordhan.

What do the Hawks have to say?

The Hawks blasted back in a statement on Wednesday, expressing surprise over Mkhwebane’s stance on the investigation. The unit said, in fact, that Mkhwebane had specifically requested the right to make a statement to the Hawks on the matter.

“The DPCI [Hawks] has been waiting for her exculpatory statement as expressly requested so that the matter can be tabled before the National Prosecuting Authority for decision,” the statement read.

“Now that her refusal has been made known via the media, the DPCI shall no longer expect the application of the audi alteram partem rule [the right of all parties to give their side of the story] but will now process the docket to the National Prosecuting Authority for a decision, without her statement.”

The Hawks also denied Mkhwebane’s claim that many serious matters she refers to the unit are not taken seriously.

“All the matters that have been referred to the DPCI by her office are receiving attention,” the Hawks stated. “We have not received a concern from the Public Protector that suggests otherwise.”

In response to the allegation that the Hawks are targeting Mkhwebane as part of a wider political vendetta, the unit reminded the Public Protector that she had the right to lodge a complaint under the Police Act “without courting unnecessary publicity”.

The statement concluded: “There is no amount of unwarranted statements that will prevent the DPCI from independently executing its functions.”

What is the wider political context here?

To the Public Protector and her supporters, the Hawks investigation is just one more example of attempts to force Mkhwebane from office as a result of her fearless investigations – or, as she termed it on Tuesday, her habit of “touching the untouchables”.

The EFF’s Floyd Shivambu expressed this view when he tweeted: “The capitalist establishment is fighting the Public Protector and they will not win.”

The pro-Mkhwebane forces have been assisted by journalists from the Sunday Independent, which has been consistently disseminating the narrative that Mkhwebane is the target of a political witch hunt.

Yet some of the most vociferous critiques of Mkhwebane’s conduct in office have come from legal experts and South African judges, who have repeatedly pointed out glaring legal errors in Mkhwebane’s conclusions and extraordinary flaws and omissions in her investigation methodology.

In one case which had nothing to do with high-profile political figures, Mkhwebane’s report on allegations of maladministration in the Bapo ba Mogale community revealed a failure to adhere to the Public Protector Act, a failure to interview pivotal characters during her investigation, a willingness to draw questionable conclusions based on incomplete evidence, and a subsequent reluctance to submit the full record of documents on which Mkhwebane based her report.

It was this kind of shoddy – and sometimes downright unethical – work that drew concerns about Mkhwebane’s fitness to hold office well before her investigations into Gordhan and Ramaphosa took place.

Another cause for alarm has been Mkhwebane’s statement – repeated once more on Tuesday – that “only God” can remove her from office.

Although Mkhwebane sees the parliamentary proceedings to determine whether she should be removed from office as the final proof of the executive’s desire to oust her, the request to institute proceedings was made by the DA.

It is also by no means guaranteed that the parliamentary process will result in Mkhwebane being booted out. The matter is to be considered by an independent panel – not, as Mkhwebane claims, MPs with an axe to grind against her – which must be made up of people “who have the necessary legal and other competencies and experience to conduct the assessment”, according to a statement from Parliament.

The panel is tasked with considering whether there are sufficient grounds to then set up a special parliamentary committee to consider Mkhwebane’s removal. That committee would include representatives from Mkhwebane’s staunch supporters, the EFF.

The parliamentary process, in other words, is considerably more long-winded and objective than Mkhwebane has given her supporters to understand.

But it is now clear that pro-Mkhwebane forces are focused on creating the popular perception that the Public Protector is being martyred to protect powerful interests – and truth be damned. DM