Cape Town’s course of injustice: Subsidising the rich to exclude the poor 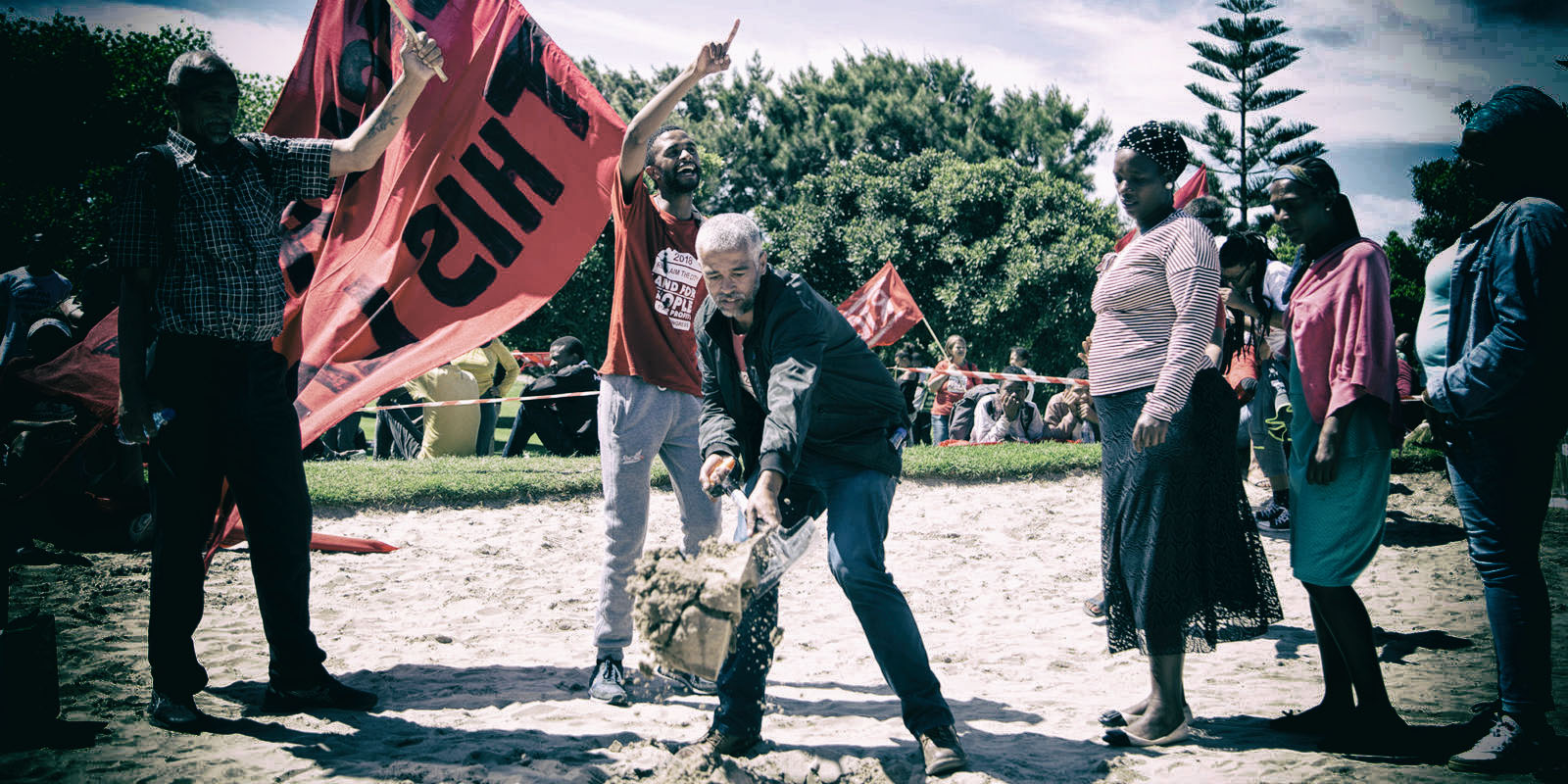 A member of the housing activist group Reclaim the City digs up sand on the Rondebosch Golf Club in Cape Town during an occupation on Human Rights Day, 21 March 2019. (Photo: Tessa Knight)

In the face of the worst housing affordability crisis in South Africa, the City of Cape Town continues to subsidise the rich by renting out prime land at massively discounted amounts for private use – land that could be used to reverse the City’s apartheid legacy.

In November 2019, StatsSA released the Inequality Trends report, which found that South Africa is the most unequal society in the world. The report shows that inequality follows racial, gender and spatial lines, and is deepening every year – with a small population of the wealthy elite getting richer, and the poor and working class getting poorer.

The key finding of the report is that in 2015 the median income of the average South African was a mere R13,546 per year. This means that half of the population earns less than this amount annually – roughly R1,130 a month. In stark contrast, the report also found that the wealthiest 10% of the population earn almost 60% of the income and own almost 95% of the country’s wealth. The bottom line is that inequality has remained stubbornly high and the majority of South Africans are struggling to make ends meet.

One of the primary drivers of this structural inequality is the skewed pattern of land ownership and the acute shortage of well-located affordable housing. The poor live further away from jobs, spend more of their limited resources and time on transport, and have fewer options to access healthcare, education and basic services in the far-flung areas of cities. This pervasive fault-line – where the legacy of apartheid meets the broken promises of the current government – has become a chasm which many poor and working-class people simply cannot cross.

Nowhere is inequality more visible than in Cape Town. Twenty-six years after apartheid, Cape Town remains the most spatially divided city in South Africa – with residential settlement patterns are still segregated along race and class lines. The city continues to be split in two: the majority of black and coloured families live in densely populated, peripheral townships and informal settlements where most are trapped in a cycle of poverty. On the other side, (predominantly) white people inhabit the central residential areas of Cape Town where jobs, transport facilities and social amenities are plentiful.

While this spatial inequality has its historical origin in the colonial and apartheid eras, it has been exacerbated since the end of apartheid. Respected urban geographer at the University of Cape Town, Professor Sue Parnell, recently wrote in court papers that “Cape Town’s economic centre remains vastly less densified and diverse than it was 50 years ago.”

The City of Cape Town has consistently blamed this spatial injustice on a lack of available well-located land that could be used for affordable housing. The City’s solution has been to push for state-subsidised housing on the outskirts of urban areas, where land is cheaper.

The City is not wrong when it says suitable land is extremely scarce in central or well-located areas – it is expensive to buy and will only become more so in the future. But the City is missing the most obvious solution. It already owns vast tracts of land in well-located areas. Land that is unused or under-utilised, that could provide ample space for social housing and reverse the City’s apartheid legacy.

However, despite the potential that this public land holds, a large chunk of the public land owned by the City is rented out to private organisations for nominal amounts (sometimes as low as R920 a year). This land includes parking lots (some of which are empty for up to 18 hours a day), bowling greens with waning and/or tiny memberships, and massive golf courses that provide enjoyment to a few wealthy residents on the weekends. This is an inefficient, exclusive and unsustainable way to deal with prime public land. Surely this land should be put to better use?

The most recent example of the City’s failure to manage scarce public land in the interest of all Capetonians is its plan to renew a lease to Rondebosch Golf Club instead of using the land for affordable housing. The whopping 45.99 hectares (the size of 45 rugby fields, the equivalent of a small suburb) of prime public land, is close to the best hospitals and top-performing schools in the province, a police station and transport nodes (including two train stations and taxi routes) – making it perfect for the development of social or affordable housing.

And yet the City proposes renewing a 10-year lease with the Rondebosch Golf Club for a nominal amount (the exact rental amount has not been made public; the previous rent was a mere R1,000 a year) for the exclusive use of its few wealthy members.

What makes this lease particularly distasteful in the face of an affordable housing crisis is that the golf course virtually borders two other golf courses (one of which also sits on public land). This means that wealthy residents who happen to enjoy golf have their pick of which huge tract of public land they would like to utilise.

The City raises a variety of technical reasons why the land cannot be developed for affordable housing, chief of which is that some of the land falls below a floodline. However, in a report published in 2019, the activist organisation Ndifuna Ukwazi proved that more than 2,500 housing units could be developed on the site in spite of these technical challenges, leaving wetlands intact and avoiding the floodplain entirely (of these 2,500 units, 1,433 would be cross-subsidised affordable housing, providing homes to roughly 2,400 people who could otherwise not afford to live close to decent social amenities).

The City also claims that the lease renewal is justified because the golf course is “exceptionally beneficial” and serves “the community”. According to the City, the golf course is a public space rather than an exclusionary private space. This logic simply does not hold. The membership fees at Rondebosch Golf Course are R17,000 a year. When we compare these fees to the median income of the average South African – a mere R13,546 a year – the stark reality of exclusion becomes painfully evident. The amount that an elite few happily spend on recreation is more than the majority of South Africans earn and live off in a year. So which “community” will derive this “exceptional benefit”?

We don’t need more sports or recreational facilities, we need more affordable housing. And yet politicians and city officials keep reserving prime land for an elite few. These leases amount to the City subsidising the enjoyment of the wealthy at the cost of the poor and working class.

Last week the Mayoral Committee Member for Economic Opportunities and Asset Management, James Vos, defended the proposed renewal in a radio interview. When asked why the City is so hesitant to develop affordable housing on the Rondebosch land when it is willing to develop other land that poses similar technical challenges, he claimed that his department was only “responsible for the transaction of the lease” and that these questions would have to be referred to the departments dealing with housing and human settlements.

Vos’s response cuts to the heart of the problem: It’s not about individual golf courses or sporting facilities, it’s about the City’s failure to develop a coherent, overall plan to manage prime public land for the public good, in a way that challenges the acute urban housing crisis. Offering weak arguments to protect exclusionary spaces and vested interests is unacceptable in a constitutional democracy that prioritises spatial justice. We need politicians and City officials who recognise the important social role this land could play in ensuring that Cape Town becomes a more equitable place where all Capetonians can access dignified, affordable housing.

In the coming weeks, the city council will invite interested parties to submit comments on whether the Rondebosch Golf Course lease should be renewed. If we are serious about addressing spatial injustice in our city, we need to make our voices heard. DM

Michael Clark is a researcher at Ndifuna Ukwazi.