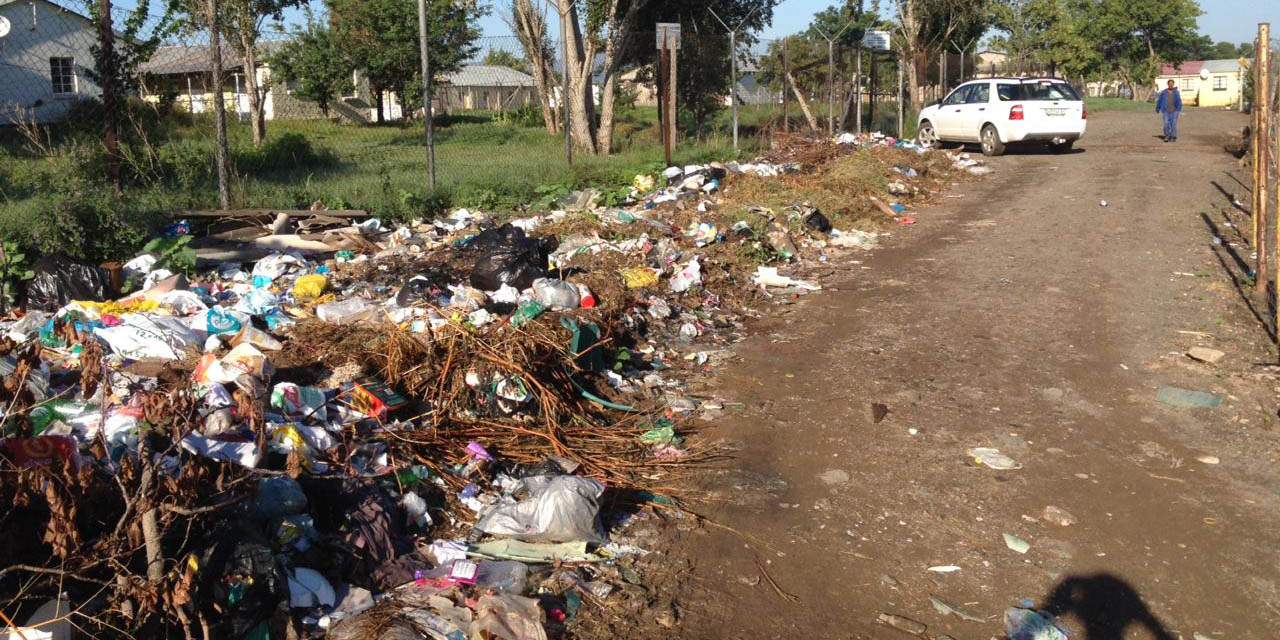 Waste is piling up in many neighbourhoods in the Enoch Mgijima Local Municipality in the Eastern Cape. (Photo: supplied)

Detailing the ‘diabolical’ financial and service delivery collapse at the Enoch Mgijima Local Municipality, a group of community organisations known as Let’s Talk Komani has now approached the Eastern Cape High Court to have the municipal council dissolved.

“We have had enough of their arrogance. We have been trying to push water uphill for too long. They have made us into their enemy,” said Ken Clark, the chairperson of Let’s Talk Komani.

Since 2018, when the Enoch Mgijima Local Municipality in the Eastern Cape first hit the headlines for spending R90,000 on KFC despite massive services delivery failures, the situation has gone from bad to worse, according to papers before court that detail the collapse.

“The municipality is in a financial crisis and is unable to deliver basic services to the residents of the municipality, ranging from water, clean air, electricity, waste removal, roads infrastructure, roaming animals and fire fighting,” Clark said in the founding affidavit of the application to have the municipal council dissolved.

This would be the second such application in the Eastern Cape High Court. Earlier in January 2020, the Makhanda High Court ordered that the council of the Makana municipality be dissolved. Judge Irma Stretch ruled in that application that the lack of service delivery was so poor that it was unconstitutional. Both the office of the premier and the municipality have indicated that they are appealing against this judgment.

“When that judgment was delivered, it was a wonderful day,” Clark said. But, he added, he believed their case was even stronger. Clark said they have asked the court that anybody opposing Let’s Talk Komani’s application be ordered to pay a punitive cost order in their personal capacities as they believe it would merely be an attempt to “defend the indefensible”.

“The judgment in the Makana case is going to create an avalanche of court applications,” he said.

“When we started Let’s Talk Komani in October 2018, I knew that we needed a rallying cry. At the time, we had water issues for many years. I went to the municipality and I said I will offer my services for free. I can get the water up and running again. I will cut the costs. This took them aback. People got angry because they would not accept free help. This bought us a lot of credibility,” he said.

It was explained in court papers that the provincial government had appointed an administrator for the municipality in September 2018. Vuyo Mlokothi titled his report to the Eastern Cape government:

“How to collapse a municipality in full view of its vanguard.” He had to get protection. The municipality gave him three security guards. When the levels of threats against his life escalated, he asked for more protection, but none was forthcoming. He later became too ill to continue and his recovery plan was never implemented.

“They basically ran him out of town,” said Clark.

His successor advised the Eastern Cape government to dissolve the council.

A separate report commissioned by the Eastern Cape Department of Co-operative Governance said that the municipality failed to implement correct and appropriate systems to collect revenue efficiently and also failed to employ suitably qualified and competent staff members in senior staff positions. According to this report, the July 2019 operating income for the municipality was R25-million. This broke down to R19-million as payment for electricity and R3-million rates and taxes. The staff payroll alone was R27-million and the municipality was using treasury grants to pay Eskom.

In November 2019, the Border-Kei Business Chamber had to bring an application to prevent Eskom from cutting the electricity to the municipality. Clark said this was settled by the municipality who agreed to a payment schedule.

“But we are worried that they will soon renege on this agreement because we hear they had to go ask another municipality (Chris Hani District Municipality) for money to make their payroll. They have to pay every month on time,” said Clark.

“We are without electricity for up to 40 hours at a time because they have no parts in stock to join a cable, so they have to go to East London to get it,” he said.

According to papers before court, few or no accounts are distributed. The municipality also adopted a budget that Treasury has considered not to be fully funded. At a meeting in East London, Treasury instructed the municipal council to cut staffing costs. Instead, the municipality, according to court papers, cut down on their purchase of bulk electricity and added a R100-million deficit by not acting against illegal consumers.

The Auditor-General was “unable to express an opinion” on the municipal books for 2019.

“This in itself is sufficient reason to conclude that the mismanagement by the municipality is so bad that it may amount to criminal conduct,” said Clark.

Court papers also highlight that the waste site is not being run in compliance with regulations and that waste was illegally incinerated causing air pollution. Clark said of the 11 refuse removal trucks that the municipality is supposed to have, it only has five and apart from the electricity infrastructure collapsing, the roads are also very bad. Livestock is “running free” in town, he added.

Clark said they feel very strongly that ratepayers must still pay their accounts. “Many people are saying that they don’t want to pay any more because people are just ‘pilfering the purse’. But we are against this. We cannot condone a culture of non-payment,” he said.

“They said to us that they were told by the municipality that all was well,” said Clark, as he laughed.

The provincial government and the municipality indicated that they will be opposing the matter. They have until 31 January 2020 to file their papers. However, Premier Oscar Mabuyane’s spokesperson Mvusi Sicwetsha said last week that they had not received the papers in the matter. “We can’t talk about defence of a matter that we have not received papers for,” he stated in a WhatsApp message. MC

Lessons of Aids for Covid-19: Don’t sacrifice science to expediency

Covid-19 and the suppression of freedom of expression (Part Two)

Covid-19 and South African universities: A raft of problems to ponder