JAN, ON THE TABLE

The Rise and Rise of Jan-Hendrik van der Westhuizen 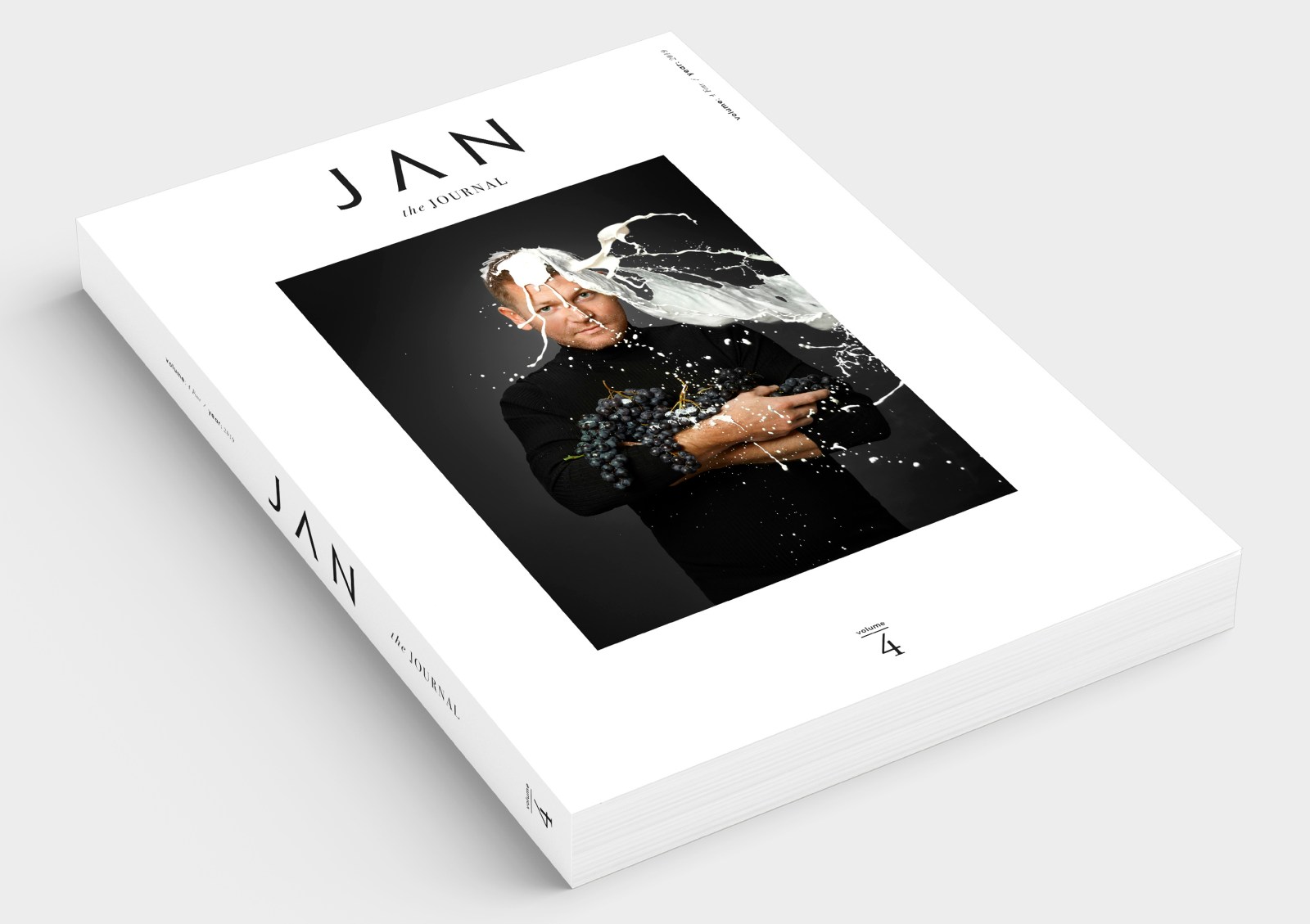 JAN the JOURNAL is a a cookbook-cum-coffee table book published twice a year.

Jan-Hendrik van der Westhuizen is taking a big bite of the South African food scene. He’s chef and owner of JAN, a one-Michelin-starred restaurant in the old part of Nice, France, but there’s more than that.

Jan’s brand identity is the Middelburg, Mpumalanga, farm boy who decided to cook with mom and the late Ouma Maria, then worked hard to create a restaurant name overseas, incorporating the rusks and Cremora coffee creamer in smart tasting menus alongside Boeuf Bourguignon and Roquefort, to educate about and elevate ingredients South Africans are nostalgic about, styling them with classic French finesse.

On 3 February 2020, the second season of JAN, the TV series, makes its debut. The pilot opens with an aerial view of the chef bobbing in the Mediterranean swell in swimming trunks. A clue that with Jan, you should expect drama.

At the TV launch, the emcee relayed that she’d mentioned chef Jan to her hairdresser’s assistant that afternoon. “Who, Jan Braai?” was the reply. Yet google “Jan” and it’s evident that Jan Hendrik has little local competition in the social media stakes. His websites hold the first five google rankings.

“We’ve got the restaurant in France and that’s the mother ship. I’m mostly based there in Nice in an apartment, within walking distance of the restaurant in the old part of town,” says Jan. “I just bought myself a 1962 vintage Fiat 500; her name is Rosie.

“I spend most of my time at the restaurant, markets, sourcing from new suppliers. Evenings in the kitchen, on the pass. We open only for dinner, five days a week. My team has been with me five years.” Head chef Rutger Eysvogel is from Saldanha.

The 24-seater fine-dining portside restaurant is described on the website as “a celebration of South African hospitality” serving food inspired by market produce from the South of France. The Michelin guide 2019 says the “intimate and romantic” one Michelin-star restaurant serves “creative and contemporary cuisine”. A four-course or seven-course tasting menu is on offer.

“In between, although I love cutting carrots, I slowly had to move away from that side to build this other side,” Jan says. “I don’t have time to write recipes any more. But there’s a demand for it.”

This is where his publishing and styling team comes in. Operating from the inner city Cape Town Innovation Studio, Food Editor Barbara Joubert and colleagues train culinary students in food writing, business management, food styling and publishing. “There’s a whole side that chef schools don’t touch on” is how Jan puts it.

It is key to his cheffing staff complement and training ethos. The four South African students from Silwood, Prue Leith and the Institute of Culinary Arts spend three months training at JAN in France, then a week or two in the Kalahari, researching edible plants with knowledgeable scientific foragers. Plus a few more weeks in Cape Town at his Innovation Studio. It is a paid internship.

The JAN Innovation Studio opened in 2019, in Cape Town’s Kloof Street. Like everything Jan is involved in, the triple-level space is meticulously crafted, crammed between inner-city restaurants and décor stores. If you attend an exclusive dinner for 16 at the JAN Innovation Studio, you’ll pay R3,500 for the privilege. They only happen two or three nights a month, and are open to corporates or the public: you book a couple of seats at Jan’s table, where he cooks and serves. It feels like a dinner party spoil in somebody’s home.

I was hosted by Jan, courtesy of Graham Beck, in December 2019, sipping premium MCC offering Cuvée Clive, plus other champagnes. It was a top-notch dining experience. From the terribly clever tomato, onion and Boerenkaas braaibroodjie macarons we nibbled as canapes on the rooftop with Table Mountain as a backdrop, to the gifts and incredible cheese table later on.

The studio’s lower sections are divided into a modern, white kitchen, dining and bar space. And a dramatic, all-black vintage area that includes a striking library with a local cookbook collection. Thanks to social media follower pleas last year, Jan is close to achieving his dream of growing the biggest South African cookbook library in the world, with the aim of “rediscovering our culinary past”.

About 400 cookbooks and counting, waiting to be filed, marked by era and style. Once Klein JAN restaurant opens in a rustic farmhouse in November at Tswalu game reserve near Kuruman, the plan is to move some books to the Kalahari.

I point out that the Innovation Studio experience seems curated, things happening in sequence, diners moved around and table décor adjusted. What about picky eaters or stubborn customers who don’t like this or that?

Jan agrees. “It is very curated. It’s my vision and styling, we don’t reveal the menu. Although we obviously cater to any dietary requirement in advance. But if we have somebody who won’t eat duck, we can usually make a plan.”

A moment for a Jan anecdote. This chef was 29 when he opened the Nice restaurant. “It took two years to plan it, I got deported just beforehand. The beauty of a South African passport,” he shrugs and smiles. But there’s more. “Five years later the French president invited me for lunch in Paris with fellow South African politicians. It was the Zuma era. I kindly declined.”

Although he hasn’t seen support dwindling from his gourmet dining clientele in South Africa, Jan says his brand isn’t only about charging R3,500 for exclusive dinners. “This year we’re doing 10 dinners at retirement homes. My mother used to make us sing at these homes when we were children. I hated it at that stage, but now I miss those people,” he says.

“So we’ll take a hair and make-up artist and make them feel special with a perm and a glass of bubbles again.” The chef with an artistic bent shows his colours.

It’s educational, escapist and tongue-in-cheek in parts. Recipes and curated lifestyle shots share pages with beautiful photo essays by talented photographers. Veuve Clicquot champagne, private wealth firms, Mercedes-Benz and uber-exclusive Louis-XIII Cognac advertise, or have product placements, receiving perks if they book a few volumes in advance. Jan describes them as “friends of the brand”, noting that production and staff costs are steep.

As with everything linked to Jan, the journals showcase South African food history too – following a recipe for slaphakskeentjies (creamy onion salad), the same onions receive a French twist as an elegant terrine on the next page. Peppermint Crisp tart has a stylish makeover, accompanied by Jan’s anecdotes. It all offers a window into the brand and the chef that is Jan.

I liked the look of boerewors Scotch eggs in the “Eggs for breakfast” section of JAN the JOURNAL, volume four. Another spread shows a jar of Marmite placed on a vintage tray alongside boiled eggs with toast soldiers – and caviar.

Critics will say it’s too much about the sideshow. Whenever a chef is involved in multiple projects outside the kitchen, there is a tendency to criticise the plates leaving the pass more than most.

“It is also about promoting yourself on social media. I’m very strong on that and it’s something I try to push over to the students,” says Jan.

Jan relates the story of a student whose food memories were about putu pap, so they decided to use that creatively. “I always say: don’t try to make a souffle or do gels … copy others. It’s about how to build a restaurant and what you should look for in your signature. As a chef, how do you build a food identity that is true to yourself?” It’s a comment about his young protégés as much as it’s reflecting his own trailblazing career path. “There is so much out there, how do you stand out?” DM

The first episode of JAN Season 2 airs on Monday 3 February at 8pm on VIA (DStv channel 147) and Showmax.