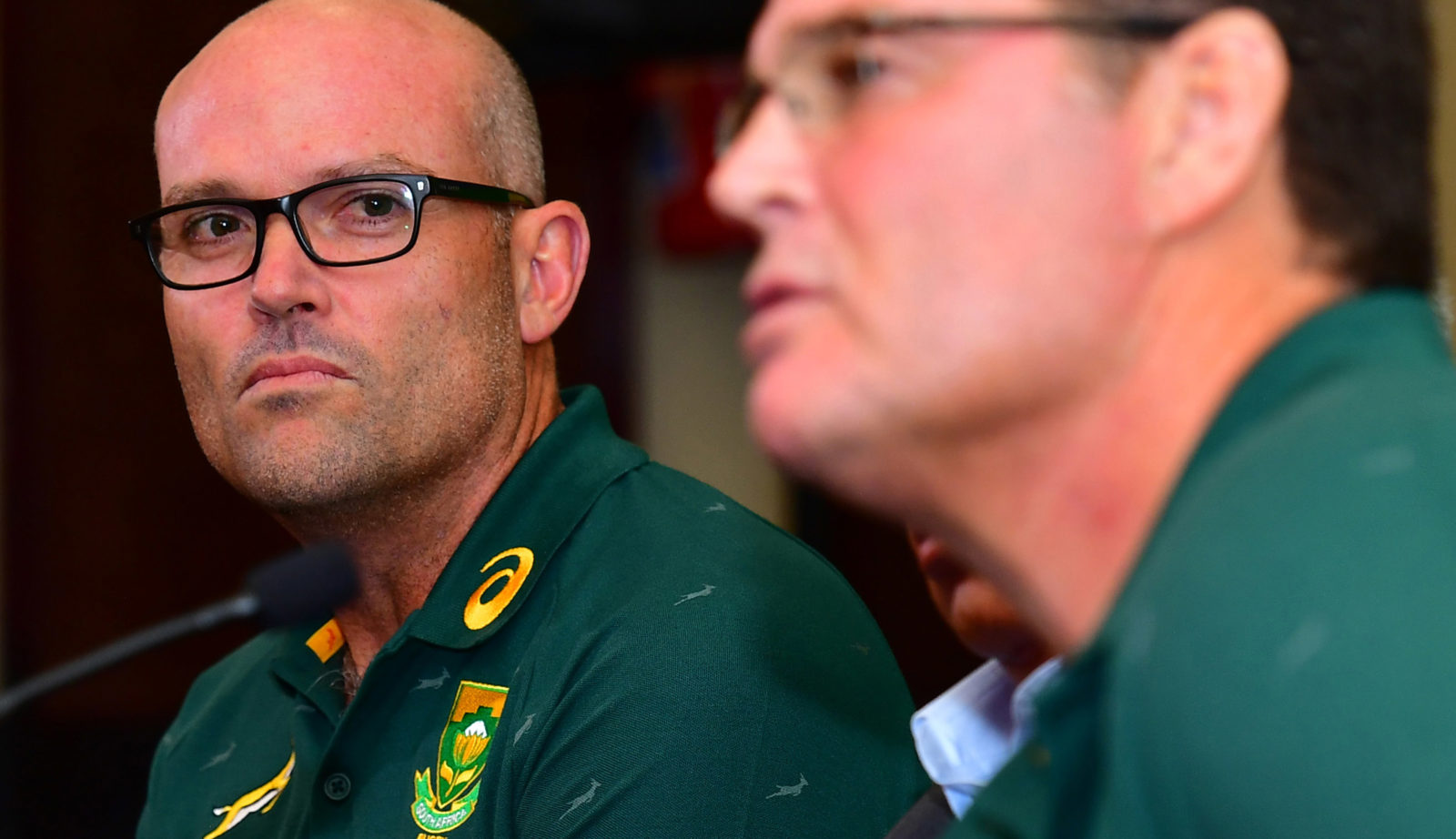 Jacques Nienaber will officially carry the title of Springbok coach until Rugby World Cup 2023, but it is as clear as a bright spring morning that Director of Rugby Rassie Erasmus remains firmly in charge.

Jacques Nienaber, 47, was unveiled as the new Springbok coach in Pretoria on Friday 24 January, ostensibly replacing Erasmus, although the latter never officially carried the title “coach” in 2018 and 2019.

In every communique from the SA Rugby media machine after Erasmus took over the day-to-day running of the Springbok team in early 2018, he was referred to as “director of rugby”. Technically, the Springboks haven’t had a head coach since Allister Coetzee’s departure nearly two years ago.

Erasmus retains the title of director of rugby, with Nienaber taking on a title that has mentally broken almost every one of his predecessors because of the strain it places on its holder.

Uniquely though, keeping with Erasmus’ innovative character, Nienaber is both empowered and protected by the man above him in SA Rugby’s organogram. Whatever strain and pressure he will have to bear – and there will be a great deal – Erasmus will split it with him. Similarly, any success and plaudits that come Nienaber’s way will be shared with Erasmus.

This is not a one-man job and in many ways it is business as usual for two coaches whose personal relationship goes back nearly 30 years and their coaching collaboration for 20.

Over the course of the past 20 months, since Erasmus took on the task of taking the Boks to RWC 2019, which ended in glory last November, it was Nienaber who had a massive input in tactical and technical decisions. Nothing really changes now even though the spotlight will shine a little brighter on Nienaber.

Nienaber is a coach’s coach. He started as a physio with the Cheetahs and progressed to technical analyst and eventually into one of the world’s most sought-after defence coaches. Nienaber loves to dirty his hands on the training field and is more concerned with ensuring players understand the game-plan and their own roles than glad-handing sponsors, board members and the media. But those are essential aspects and requirements of a traditional “head coach” at this level. Which is where Erasmus comes in.

Erasmus is not only a smart rugby coach but has also evolved into a masterful relationship manager between rugby’s often disparate stakeholders. Erasmus’s ability to absorb the external distractions of the job will allow Nienaber to continue what he’s best at – coaching.

Even with Erasmus to lean on, Nienaber has never officially carried the head coach title for any team, let alone with world champions. He has always operated in the shadows, the power behind the throne.

Nienaber played down the fact that he has never been a head coach when he was presented to the world as the man to steer the Boks through a tough four years with the weight of expectation that comes with being head coach of the world champions.

“I can’t convince people who doubt [my credentials] to believe; my results will have to do that. It’s a big step-up for me in terms of carrying the day-to-day leadership role and there’ll be other adjustments, but in many ways it will also be business as usual. We’ve built up a good culture over the past two years and we’ll simply be looking to extend that.”

Former Bok captain Schalk Burger, who worked closely with Nienaber at the Stormers for five years, expressed some concern about those “adjustments” Nienaber mentioned.

“It is good to have continuity and Erasmus and Nienaber are aligned,” Burger said on the Maverick Sports podcast.

“But it is also a different voice [for the players]. For the last 20 months the voice has been Rassie Erasmus’s and now it will be Jacques Nienaber’s. Yes, Rassie will still be controlling things from the top, but it is different.

“I know him well and he is a very good guy and a magnificent defence coach, but he is a rugby mechanic. He is a defence mechanic and he wants to be on the field, or in front of screens analysing footage, or with players working on individual tackle technique.

“Unfortunately, as the head coach you get taken away from that and even though Rassie will try and take some of that pressure off him, he has a lot of other responsibilities as director of rugby.”

While there are obvious concerns about what effects the demands of the job might have on Nienaber, there is no doubt that for the first time in the professional era there is succession to the Springbok coaching position. That in itself is groundbreaking.

“The coaching team has undergone a refresh but there is a strong theme of continuity and succession planning,” said Jurie Roux, SA Rugby CEO.

“The recommendation of the director of rugby was unanimously accepted as it strongly accented those aspects.”

Erasmus added: “Jacques is highly experienced and has worked with the Springboks on three separate occasions now so he knows exactly what the job is about.

“Jacques will be responsible for the Test match preparation and day-to-day team operations but, as the director of rugby, I will be with the team for the majority of the time and in the coaches’ box with Jacques at matches.

“I’ll still be responsible for the strategy and results, with Jacques taking operational control. The structure allows the director of rugby to spend more time on other aspects of the role.”

Bulls scrum coach Daan Human was appointed as a scrum consultant to replace Matt Proudfoot, who has joined England. Irishman Felix Jones, who worked with the Boks at RWC 2019, is also an assistant coach and will be based in Dublin where he will monitor European-based players in the Springbok selection discussion.

And the head of athletic performance, Aled Walters, the man widely acknowledged as the Boks’ secret weapon at RWC 2019, has also been retained.

For once the usually stormy waters of Springbok rugby are calm, as South African rugby goes into a new era with high expectations and belief. DM