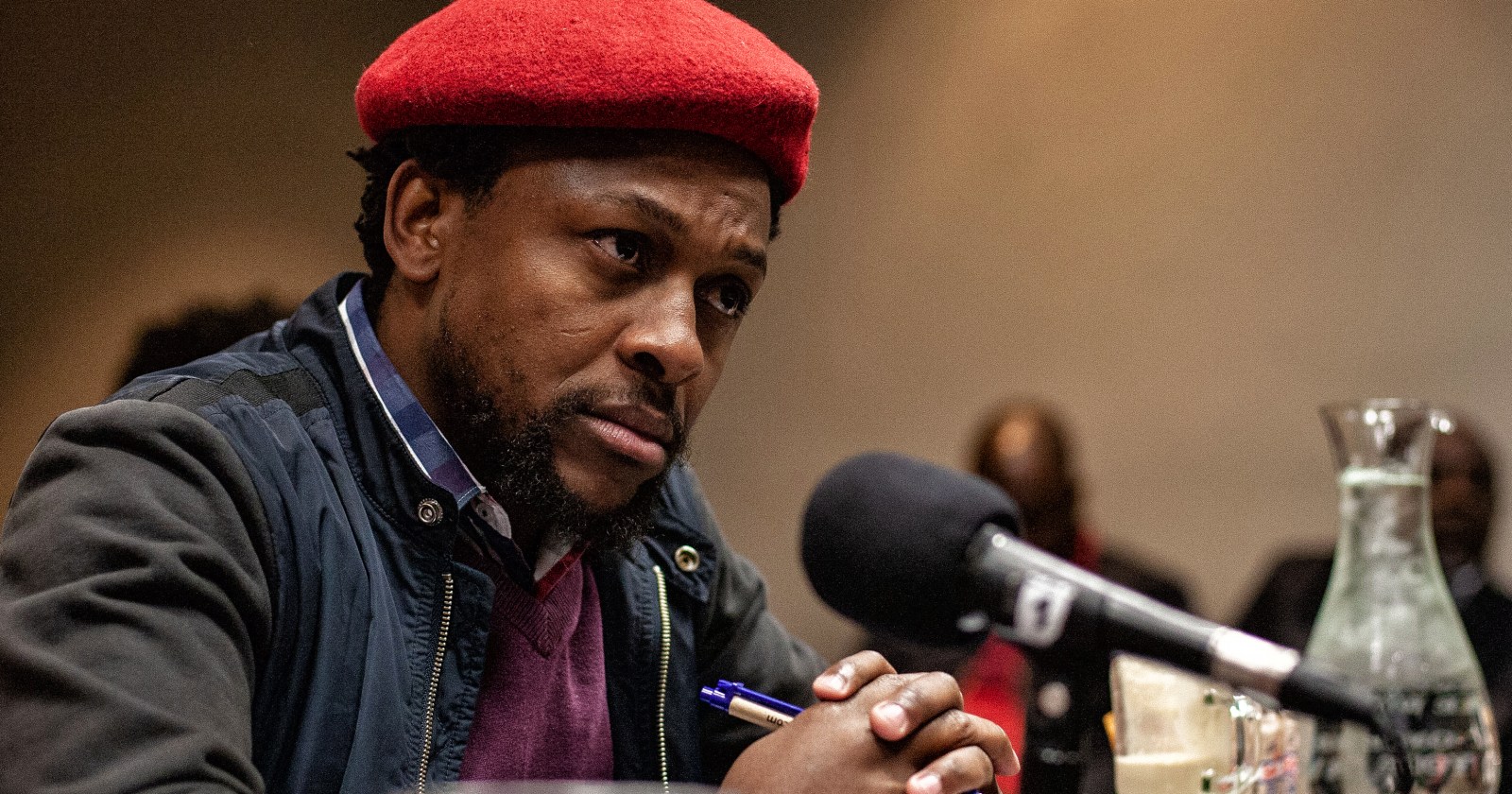 Photo: EFF spokesperson Mbuyiseni Ndlozi speaks at the inquiry into editorial interference at the SABC on July 16, 2018. (Greg Nicolson)

Journalists Thandeka Gqubule-Mbeki and Anton Harber have won their defamation suit against the EFF and its spokesperson, Dr Mbuyiseni Ndlozi, who claimed that the two worked for the apartheid government’s Strategic Communications agency (Stratcom).

That’s how long the Economic Freedom Fighters and its spokesman Dr Mbuyiseni Ndlozi have to apologise to Thandeka Gqubule-Mbeki and Anton Harber for making defamatory remarks about them.

They also have to pay the pair R40 000 each but no deadline was stipulated as to when this needed to be done by.

Gqubule-Mbeki and Harber filed a court case against the EFF and Ndlozi in 2018 after they alleged that the two journalists were part of Stratcom, the notorious propaganda and disinformation apparatus of the apartheid security police.

They had applied to the court for defamatory relief, claiming that the statements made by the EFF and Ndlozi that they were part of Stratcom were “defamatory and false”, that the party and Ndlozi remove the statements from all their media platforms, and to publish a statement on their media platforms within 24 hours of the order, retracting the defamatory statements and apologising unreservedly. They also asked for damages of R500,000 each and for a cost order against the party and Ndlozi.

The party and Ndlozi argued that the statements were political speech which the EFF had the right to make based on its right to political freedom. They also suggested that the allegations were true as they were “made by a person they consider to have credibility in the person of (Winnie) Madikizela-Mandela”.

In a judgment handed down on 24 January by Judge Lebogang Modiba, the statements were found to be false and defamatory.

The court ruled that the EFF and Ndlozi’s statements had to be retracted, apologised for unreservedly and were unlawful.

While the EFF and Ndlozi were “granted leave to file a supplementary answering affidavit”, their request to refer the matter to trial was dismissed.

They were “ordered to remove the statements within 24 hours of the granting of this order from all their media platforms including [the EFF’s] website and [Ndlozi’s] Twitter account”.

Both the EFF and Ndlozi have to cover the costs incurred by Gqubule-Mbeki and Harber for their application and damages of R40,000 each must be paid to the journalists.

“The respondents have not presented any evidence before this court of the truthfulness of the allegations. They clearly did not have such evidence when they published the statements. They have not taken the court into their confidence regarding the steps they took prior to publishing the statements to verify their truth,” the judgment reads.

The allegations by the EFF started because the late Winnie Madikizela-Mandela named Gqubule-Mbeki, Harber and Nomavenda Mathiane as StratCom journalists in a documentary by the Huffington Post on 4 April 2018.

The judgment gave the following background information: “When she testified at the Truth and Reconciliation Commission (“TRC”) more than two decades ago, the late Ms Winnie Madikizela-Mandela […] named Thandeka Gqubule-Mbeki and Nomavenda Mathiane as two [StratCom] journalists. The TRC did not confirm the allegations due to lack of evidence.”

Gqubule-Mbeki currently works for the SABC as Economics Editor. Harber, an Adjunct Professor of Journalism for the University of Witwatersrand who has written for many publications, said that he was “very happy” with the judgment.

“I think they will appeal,” he said of the EFF and Ndlozi. He added, “We will, of course, oppose any appeal strenuously.”

Neither the EFF nor Ndlozi have commented on the judgment. DM