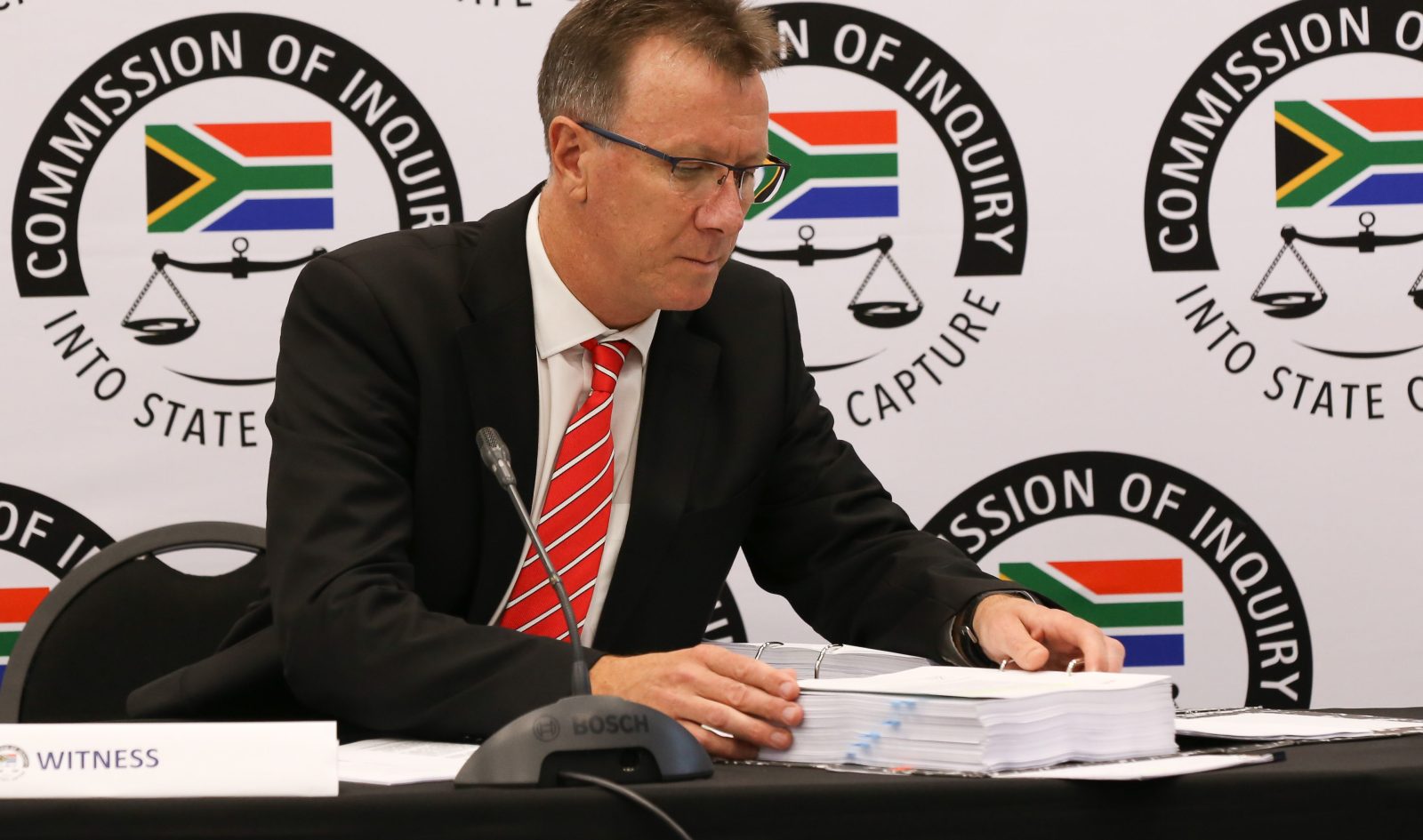 Forensic auditor Trevor White concluded his three-day testimony before the Zondo Commission of Inquiry into State Capture with details of how advocate Lawrence Mrwebi, during his tenure as the national head of the NPA’s Special Commercial Crimes Unit, quashed charges involving top KwaZulu-Natal ANC officials.

Parts of forensic auditor Trevor White’s final day on the witness stand before the Zondo commission focused on how charges against top KwaZulu-Natal ANC officials Peggy Nkonyane and Mike Mabuyakhulu were dismissed, despite there being sufficient evidence to pursue the matters.

The PricewaterhouseCoopers auditor told the commission on Wednesday, 22 January that he, with advocate Ncedile Dunywa and other investigators, was invited to a meeting with Lawrence Mrwebi in his capacity as the national director of the Special Commercial Crimes Unit (SCCA).

“Chairman, I recall the meeting very clearly because it was very unusual. The meeting started 20 minutes late because there were problems with the air-conditioning in the building,” White told the commission.

According to White, Mrwebi told the room of advocates and investigators that a decision had been taken to withdraw the charges against Mabuyakhulu.

“They just wanted to know what evidence there was against Ms Nkonyeni as they were considering withdrawing the charges against her as well,” he said.

“Once that meeting started, it became very clear to me that advocate Dunywa was almost a spectator in the meeting even though he was the lead prosecutor. Mrwebi was running that meeting,” he said.

The charges involve a R144-million irregular procurement scandal that saw a Cape-Town based businessman, Gaston Savoi, benefit from various contracts with the department of health in KZN and local municipalities.

With Nkonyeni and Mabuyakhulu at Mrwebi’s side, as a public servant and influential politician in the province, Savoi could manipulate and flout procurement procedures in favour of his company: Intaka.

The scheme was big and involved 21 government officials and politicians — and was later dubbed the “Amigos” matter. Amigos was the name the 21 suspects used to refer to one another.

White told the commission that the case had been at an advanced stage. Numerous presentations had been made to senior members in the NPA, a racketeering certificate issued and it had been before the Durban High Court.

“We asked this question between myself and Lieutenant Du Plooy and they said regardless of what has happened to date, there is no evidence against Mabuyakhulu and we must just deal with Nkonyeni.

“I got a distinct impression that they were just going through a formality of being able to say ‘we consulted with the investigator’. They actually didn’t care what we had to say,” he said.

Mrwebi was unreasonable with time, according to White. They were given limited time on the day of the 0ne-hour meeting to explain a complex investigation, but they tried in any case.

The Mokgoro Inquiry, concluded in 2019, produced a report which declared Mrwebi and his boss, deputy national director of public prosecutions Nomgcobo Jiba, unfit to hold their positions. The pair was booted out of office by President Cyril Ramaphosa after recommendations made in the Mokgoro Inquiry report.

The charges were eventually dropped against Mabuyakhulu and Nkonyeni. At present, nine are facing charges. They are Savoi, his company Intaka Holdings, his colleague Fernando Praderi, the former head of the KZN provincial treasury Sipho Shabalala and his wife Beatrice Shabalala, former head of the KZN health department Busisiwe Nyembezi, former health officials Victor Ntshangase and Alson Buthelezi and advocate Sandile Kuboni.

White also testified that when Dunywa eventually withdrew the charges in court, he specifically pointed out that he was withdrawing them on instruction.

“He told me he did that on purpose because it was not his view, but an instruction,” he said.

After the charges had been dropped some officials within the NPA did attempt to have them reinstated, but were unsuccessful.

Daily Maverick would later report that Dunywa was removed as a lead prosecutor in the case after he failed to cover up the decision to withdraw criminal charges against Nkonyeni and Mabuyakhulu.

The commission continues on Thursday 23 January and is set to hear testimony from former Eskom board chairperson Zola Tsotsi. DM