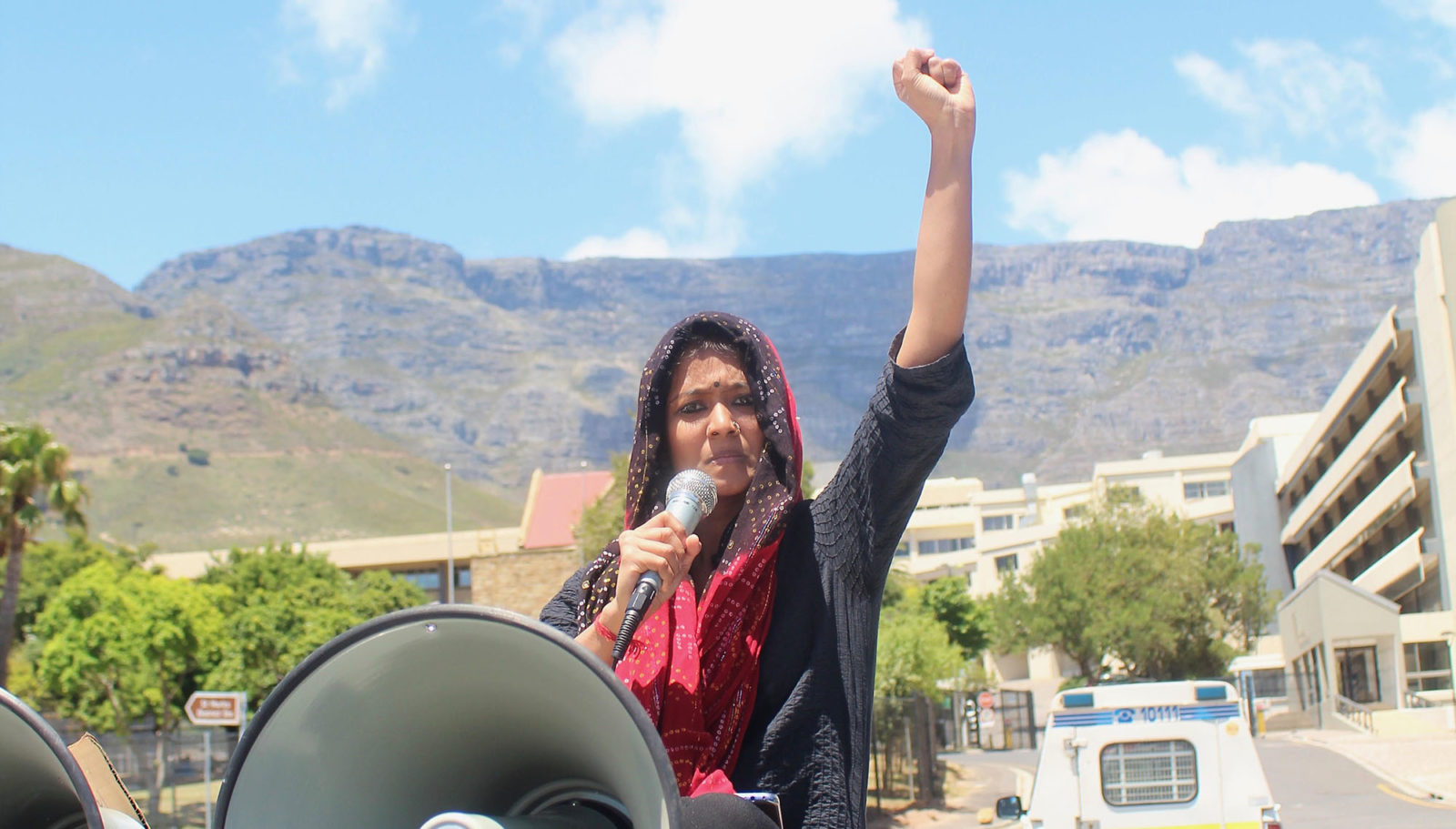 A participant in the protest march organised by People Against Apartheid And Fascism at the Consulate of India in Cape Town addresses the crowd on 9 January 2020. Hundreds of South African organisations and individuals of diverse backgrounds supported the protest. (Photo: Muslim Views/Fayros Jaffer)

Global civil outrage followed the imposition of fascist apartheid laws by the leading Bharatiya Janata Party of India in December 2019. However, a disturbing aspect of these developments is the silence generally of South African Hindu leaders and organisations.

On 9 January 2020, People Against Apartheid and Fascism (PAAF) led a march to the consulate of India in Cape Town to protest against the promulgation of the Citizenship Amendment Act (CAA) and the National Register of Citizens (NRC) by the leading Bharatiya Janata Party (BJP) of the Indian government.

The memorandum of PAAF calls on the government of India to revoke the CAA and the NRC, to cease its assault on protesters and to restore civil rights.

According to PAAF, there are approximately 1.5 million South Africans of Indian descent who have ties with India dating back almost 160 years. Durban is often referred to as the city with the world’s largest population of expatriate Indians.

The PAAF statement is endorsed by over a hundred diverse organisations and individuals, including prominent Hindus and academics, activists, professionals and businesses. Among them are Prof Uma Dhupelia-Mesthrie, the great-granddaughter of Mahatma Gandhi and the Very Reverend Michael Weeder, Dean of St George’s Cathedral in Cape Town.

Professor Saths Cooper, a clinical psychologist and anti-apartheid activist who was imprisoned with Nelson Mandela, is not a signatory to the memorandum, but expressed support for the protest. Cooper opposes “group think, which is what divides human beings from each other, as apartheid did”. He adds that “Modi’s a bigot, narrow nationalist and fundamentalist who is in good company with Trump!”

The silence of Hindu leaders

While significant numbers of diverse South Africans joined and supported the public protests, the silence of Hindu religious leaders and organisations raised questions. And there were rather startling responses when I directly questioned them about India’s retrogression into fascism and apartheid.

The president of SAHMS is Ashwin Trikamjee, a renowned Hindu priest, an attorney by profession and an active leader in the South African Hindu community. Trikamjee denounced the academic Vashna Jagarnath, who claimed, in a Daily Maverick article, that SAHMS is linked to India’s extremist Rashtriya Swayamsevak Sangh (RSS).

However, when approached to answer questions on the current developments in India, Trikamjee forwarded his rejoinder in Daily Maverick and said: “I have nothing further to add.” The leading Hindu organisation in South Africa thus declined to be interviewed.

The South African Tamil Federation (SATF) on 21 December 2019 formally endorsed a statement by South Africans Against Apartheid India, inter alia, calling on the Indian government to revoke the CAA and NRC. However, when approached on 14 January 2020, the public relations officer of SATF, Shirley Naran, said the statement had been revoked and that SATF “is not commenting on this issue any longer”.

Similar responses were received from the Ramakrishna Centre of South Africa and the Andhra Maha Sabha of South Africa. They failed to respond to questions and state their position on legislation introduced by the Modi government that disenfranchises people who cannot produce papers to prove that their ancestors lived in India for generations. The CAA also undermines the pluralist secular democratic constitution of India by prejudicing minorities, including Muslims, Christians and the Dalits, the lowest stratum of India’s caste system.

I put to these organisations that their silence and inaction are variously read as tacit approval of the BJP government’s brutal repression of dissent, and the party’s support for the fomenting of communal violence in India. The organisations chose not to respond.

Two gurus of Hindu temples in Cape Town, Guru Deva and Guru Krishna also did not respond to requests for interviews.

Another intriguing case is that of the Ahmed Kathrada Foundation which formed part of the South Africans against Apartheid India coalition in Gauteng. The coalition marched on the Indian Consulate General’s office in Parktown on 23 December 2019. The irony of the foundation’s position is that it hosted Indian prime minister Narendra Modi in 2016 when he visited South Africa amidst widespread protest by civil society organisations.

Executive member of PAAF, Rehana Khan Parker, however, disagrees and says they do see the conflict. She added this is why they chose not to foreground the foundation’s support for the protest.

By far the most alarming response was from South Africa’s newest political party, the Hindu Unity Movement (HUM). Party leader Jayraj Bachu initially states that the CAA and NRC are “entirely internal to India” and that HUM does not interfere in the domestic policies of another country.

However, he then proceeds to defend the CAA and NRC, arguing that it is a measure to protect Hindus persecuted in Muslim countries. And he concludes that it is “India’s moral obligation to provide shelter” to the Hindus and other minorities, except Muslims. This is Bachu’s rationale for the inherent prejudice against Muslims in the CAA and NRC.

Hindutva and the RSS

Hindutva is a political ideology and is quite distinct from Hinduism as a faith. The Rashtriya Swayamsevak Sangh (RSS) is the movement that champions Hindutva and was founded by VD Savarkar in 1923. It advocates right-wing Hindu nationalism and Narendra Modi has been a member of this movement since age eight, hence the powerful sway of RSS Hindu nationalists in the ruling BJP party.

The RSS, driven by a fanatic commitment to Hindutva, appropriates Hinduism for the ethno-exclusivist ideological project of an India only for Hindus. In essence, the spirit of Hindutva is antithetical to the notion of love for all in the Hindu faith, and to the inclusive Hindu vision of the world as one family.

Hindutva is also fundamentally antithetical to the secular pluralist democratic constitution of India. By definition, Hindutva is intolerant of diversity and committed to Hindu supremacy. And the RSS, which effectively spawned the BJP in 1980, exercises a powerful influence on a growing movement to spread fear of the other, particularly of Muslims in India. This movement is fascist and deeply prejudicial to minorities, especially Muslims. There is no room for diversity or pluralism.

It is thus that a climate of communal persecution of Muslims and other minorities in India is inspired by the founders of the RSS and promoted by the Modi government. MS Golwalkar, the second chief of the RSS until 1973, is on record as expressing admiration for Nazi and fascist models of social organisation for India in which Muslims are stripped of citizenship rights.

Over the past few years there has been a dramatic increase in the fomenting of communal violence and the brutal repression of dissent. This includes the lynching of Muslims for eating beef or even transporting cows.

The inaction and silence of South African Hindu leaders and organisations generally are read as tacit approval of the BJP government’s Islamophobic policies that undermine the pluralist, secular constitution of India.

Jayraj Bachu, leader of South Africa’s first Hindu political party treats with utter insouciance the introduction of the CAA and NRC. He argues that these laws are perfectly legitimate instruments for the protection of Hindus. He also defends Golwalkar’s vision of an India where Muslims have no citizenship rights, as the RSS chief’s right to free speech in India. It is therefore not surprising that Bachu does not take a position when asked about the BJP government’s brutal repression of dissent and fomenting of communal violence by appropriating Hinduism for the ethno-exclusivist ideological project of Hindutva.

Ironically, the founder and early leaders of the RSS express great admiration for the Nazi programme in dealing with the “Jewish problem” in the interests of race pride. The Nazis inspired the RSS to devise a solution for the “Muslim problem” in India. The irony deepens in that Nazism, Zionism and Hindutva all respectively seek to protect German, Jewish and Hindu national interests by means of exclusivist ethno-nationalist projects. The Nazis, however, did not appropriate religion to achieve their ends.

And, unsurprisingly, the irony is largely lost in Modi’s romance with Donald Trump and Benjamin Netanyahu, the champions of imperialism and Zionism. It is equally lost on his romance with the Saudi dictator, the champion of his own desperate grip on power. Where interests for hegemony and ideology converge, expedient alliances are forged, despite inherent paradoxes.

Thus at this time, South Africans must remember that it is their moral obligation to question the local Hindu leadership on their silence at this historic moment in India. Equally, South African Muslim leaders must remember that their moral obligation to challenge the injustice of Modi, Trump and Netanyahu also extends to challenging Muslim despots, bigots and dictators. DM

Wine in a time of lockdown: Because survival is insufficient