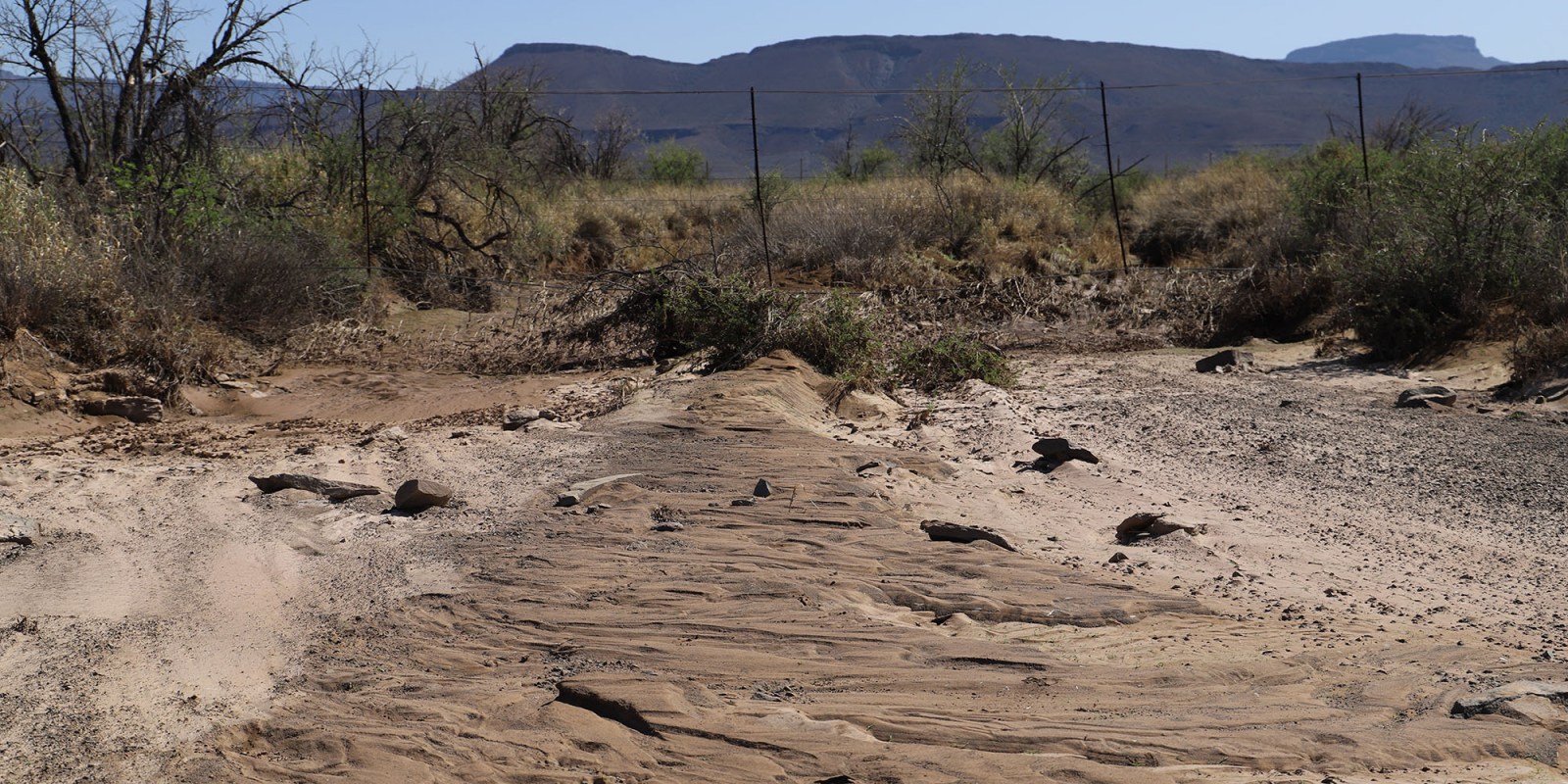 A dried-up river along the Karoo National Park on the border between the Western Cape and Northern Cape shows the extent of the drought, which has seen farms close down as a result of the death of livestock. (Photo: Ayanda Mthethwa)

January 2020 saw the Northern Cape finally declared a disaster area, with R300-million set aside by the government for emergency drought relief. But farmers say this assistance is nowhere near sufficient, with provincial agriculture already decimated by a drought spanning eight years.

“We are facing a tragedy. This is far beyond a disaster.” Sutherland resident Sybil Visagie doesn’t mince her words. She can’t afford to.

“Where I stand now, if I look out of my window, it is black, black, black. No green. There’s nothing.”

You can only truly understand the effects of the Northern Cape’s eight-year drought by seeing the landscape for yourself. When Daily Maverick drove through the province, we found just one river in over 1,000km, which maintained a trickle of water. The environmental palette contains only dull greys, browns and reds.

Where vanishingly rare patches of green grass are to be found, animals cluster, ribs protruding through emaciated bellies. From the road, one sees the bones of beasts who have succumbed to thirst, or hunger picked dry.

This is what eight years of drought looks like.

When it rained for a few hours during the first week of January 2020, there were reports that some young children of the Northern Cape experienced raindrops for the first time in their lives.

With the ANC’s top brass gathered in Kimberley for the party’s 108th birthday celebration a few days later, the province was finally declared a disaster area. Around R300-million was promised in emergency funds from the Department of Water and Sanitation, with the funding destined for interventions, which include digging boreholes and providing drinking water. Further assistance has been pledged from other government ministries, including the Department of Agriculture, Forestry and Fisheries.

But throughout the province, resentment towards the government for doing too little, too late is widespread. Gratitude is reserved mainly for the teams from Gift of the Givers, the aid organisation which has been providing relief in the form of drinking water and boreholes to drought-stricken areas all over the country.

“It seems as if [government] has no comprehension of the scale of the crisis,” Agri-Northern Cape deputy president Willem Symington told Daily Maverick.

But the government’s own researchers and officials have been aware of the worsening situation in the province for at least seven months. An Early Warning Committee report on the drought, issued by the provincial department of agriculture in July 2019, estimated that more than 15,500 farms covering more than 20-million hectares were “severely affected”, with a normal production value of R2,53-billion per year. Almost 14,000 jobs are at stake.

“With the backwards and forward linkages to the rest of the economy, [Northern Cape agriculture] is responsible for 22,437 equivalent jobs throughout the economy,” the report noted.

Agriculture, it also warned, is “one of the few sectors that can absorb a relatively large part of unskilled and lower-skilled labour”.

The worst-hit part of the province is the southern area, which encompasses towns like Calvinia, Williston, Fraserburg and Sutherland. Since 2014, this area has experienced almost no rainfall.

It is not just farmers and farmworkers taking the hit. The knock-on effects of the drought on the dorpies of the Northern Cape has been devastating, with some reduced to virtual ghost towns: Abandoned shops on the main street of places like Fraserburg tell another story about the drought’s impact on this province.

The Merino restaurant in Victoria West stood completely empty at lunchtime recently, with a waitress sitting on a chair, waiting for customers who now rarely arrive.

“It’s the drought,” she responded in Afrikaans when asked by Daily Maverick why things were so quiet.

“Nobody has money. The drought has ruined our whole economy.”

A bed and breakfast owner in Sutherland, who also runs a restaurant, had a similar account. “Previously, at least the farmers’ wives would stop in for a coffee. Now, nobody has money to spend here,” she said.

As a result of this hollowing-out of the local economy, employment has been shed in sectors like hospitality and tourism as well as agriculture.

But it is within farming that jobs are most precarious. Visagie, who is active in a number of drought relief activities, carried out a survey in 2019, which found that between 40% and 90% of farmworkers had lost their jobs in certain areas.

“[Livestock] herds have been drastically reduced to about 50% of normal [size]. This has resulted in at least 50% loss in income. Secondly, lack of natural grazing makes it necessary to buy fodder and feed for animals at great cost. Given the high price of these products, coupled with a fall of 30% in the farm price of red meat in 2019, it is an unsustainable situation.”

In the area around Sutherland, Daily Maverick heard stories of farmers simply abandoning their farms. Some, it was said, had gone overseas to try their luck at farming elsewhere.

“Farmers are packing up,” confirmed Visagie.

“In our prayer group, we already lost three farmers in a very short time. People are getting to a point where they say: Listen, it’s not working any more. But the average age of farmers in this area is 60 or more. Most farmers don’t have any option [but to continue].”

Those who stick it out have taken tremendous strain. Some farmers’ associations have organised “resilience workshops” for farmers and farmworkers in order to teach mental coping strategies.

One thin silver lining has been found in the open-hearted responses from South Africans all over the country, who have contributed money, animal feed and aid parcels to those in need in the Northern Cape.

“You see these big, strong farmers just crying as they receive their parcels,” one Sutherland local told Daily Maverick.

A range of initiatives has been born from the need to generate funds for drought relief. Visagie’s brainchild was Save the Sheep, which has seen the women of Sutherland’s farming community come together to crochet sheep to sell to raise both money and awareness. Revenue from the project also goes towards supporting farmworkers’ families.

“In Sutherland, it has brought the people together,” says Visagie.

“There is no colour in drought. I can see that people are really trying to take care of each other.”

But neither the kindness of ordinary people nor the interventions of government can ultimately solve the Northern Cape’s problem.

“Drought can only end with rain,” says Symington.

“Enough rain to reach the long-term average rainfall. Then, a long period of trying to recover. Herds will have to be built up. Debts have to be paid back.”

For now, it is not uncommon for Northern Cape locals to part ways not with “goodbye”, but with “sterkte” (strength). DM