Of the three-thousand odd government officials, business people and social activists descending on the resort for their annual pilgrimage, 119 are billionaires, Bloomberg has calculated. And with them comes an intense debate about inequality. It has been a major theme in year’s gone by, but the vitriol and anger that surrounds the issue are now white-hot. So much so, that having a rational debate about it is becoming increasingly difficult.

You have to admire their fortitude. Every year for the past eight at least, British based social activist group Oxfam come up with a bunch of great slogans intended to illustrate the horrors of inequality.

This year, they were these:

The full story is here.

And every year, the same criticisms of Oxfam’s methodology are posted somewhere, by someone – although interestingly now less so. Once the Financial Times and Bloomberg would pile into this debate, but now decreasingly so. Criticising extreme examples even if they are dubious, feels too close to denying the fundamental issue. And there is really no doubt that in developed countries at least, inequality has been rising is now at extreme levels.

For the record, Oxfam relies on Credit Suisse Research Institute’s Global Wealth Databook 2019 and its numbers for the very richest in society come from Forbes’ 2019 Billionaires List. The Global Wealth report makes its calculations on the basis of net worth, in other words, assets minus liabilities.

As a result, a recent US graduate on a huge income for example, but with enormous student debt, is poorer than a subsistence farmer in Africa. Most middle-class people leverage themselves by buying a house, and as a result, they have a huge liability on the family balance sheet. Debt is a liability if it can’t be sustained. But if it can, it turns into an asset, which is why economists like Hernando de Soto Polar have for years tried so hard to argue that this facility should be available to the poor too.

But this kind of nitpicking argument misses the larger point. Activists fighting Inequality have a big problem: on average if you take all the citizens of the world into account, inequality over the past 30 years has declined, not risen. Shocker? Actually, not really. The reason is simple: the remarkable rise of China.

According to the World Bank, China has lifted more than 850 million out of extreme poverty over the past 25 years. Its poverty rate fell from 88% in 1981 to 0.7% in 2015. Add that many people and add them to the “better than poor” column, and higher, and subtract them from the “poor column”, and what happens is the global inequality rate declines. 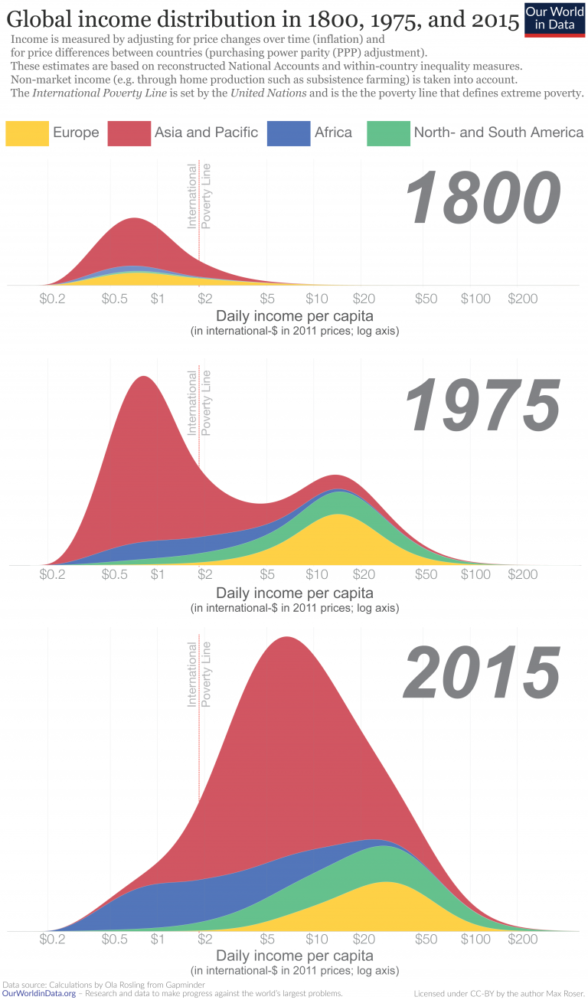 But nobody wants to hear that. And anyway, averages tend to distort the picture because in developed countries, inequality is increasing and the result is playing havoc of the world’s political systems, white-anting democracy, and it is claimed, giving rise to populist leaders. One of the big unanswered questions is whether the decline in inequality, at least in the sense that the bulk of the population is getting richer, in the east is linked to the increase in inequality in the west.

And there are many other measures of inequality; between genders, and race groups, within countries, even within companies and of course between countries or groups of countries. Many of these indicators are pointing the wrong direction. And just the huge disparity itself is grotesque. 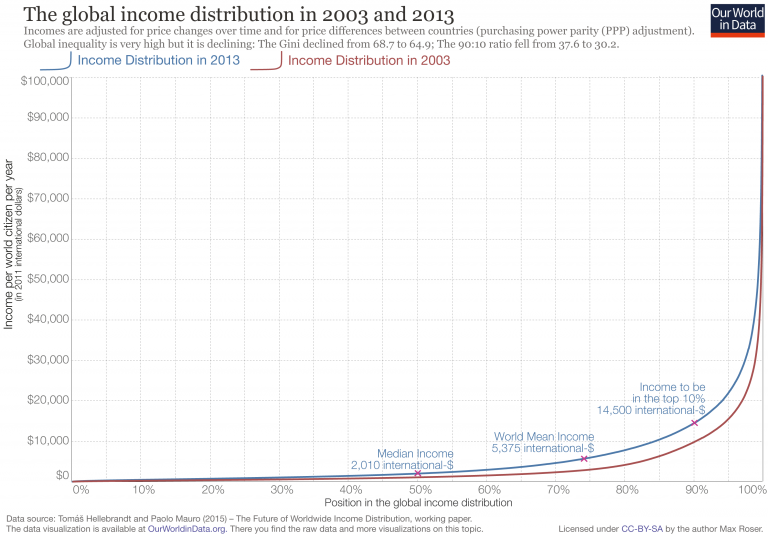 And there is one other place where inequality has not decreased at all: Africa. African population growth has been so fast over the past three decades, already high poverty rates have increased even in circumstances where wealth is increasing overall.

As a result, in the unlikely venue of a Swiss ski resort where private jets line up in droves on the runways and helicopters fill the air, the issue of inequality is now taken extremely seriously. Hard to believe, but it’s true.

To balance out the billionaires, Davos will this year be attended by, for example, Njoki Njehu, Pan Africa Coordinator of the global Fight Inequality Alliance. Her argument is that the billionaire class must be abolished. Yes, abolished. Like totally.

In an article published by the alliance, Njehu, who is Kenyan, argues that every billionaire represents a policy failure. “Such concentration of wealth in single individuals while abject poverty persists in our world is a betrayal of the principles of human welfare proclaimed by virtually all governments and all belief systems. That betrayal must end now”.

This is not going to be a popular message.

The WEF itself has other options that, you guessed it, are less extreme. The founder and executive chairman of the forum Klaus Schwab has really taken on the argument. “The social and economic consequences of inequality are profound and far-reaching: a growing sense of unfairness, precarity, perceived loss of identity and dignity, weakening social fabric, eroding trust in institutions, disenchantment with political processes, and an erosion of the social contract,” he commented.

“The response by business and government must include a concerted effort to create new pathways to socioeconomic mobility, ensuring everyone has fair opportunities for success,” he says.

But the truth is that this is a broad starting point with some more or less clear policy prescriptions in an extremely complex and complicated arena. It’s easy to say there should be higher taxes, lifelong learning and more specific and directed government action.

But as South Africans know, that can just as easily make things worse as it can make things better.