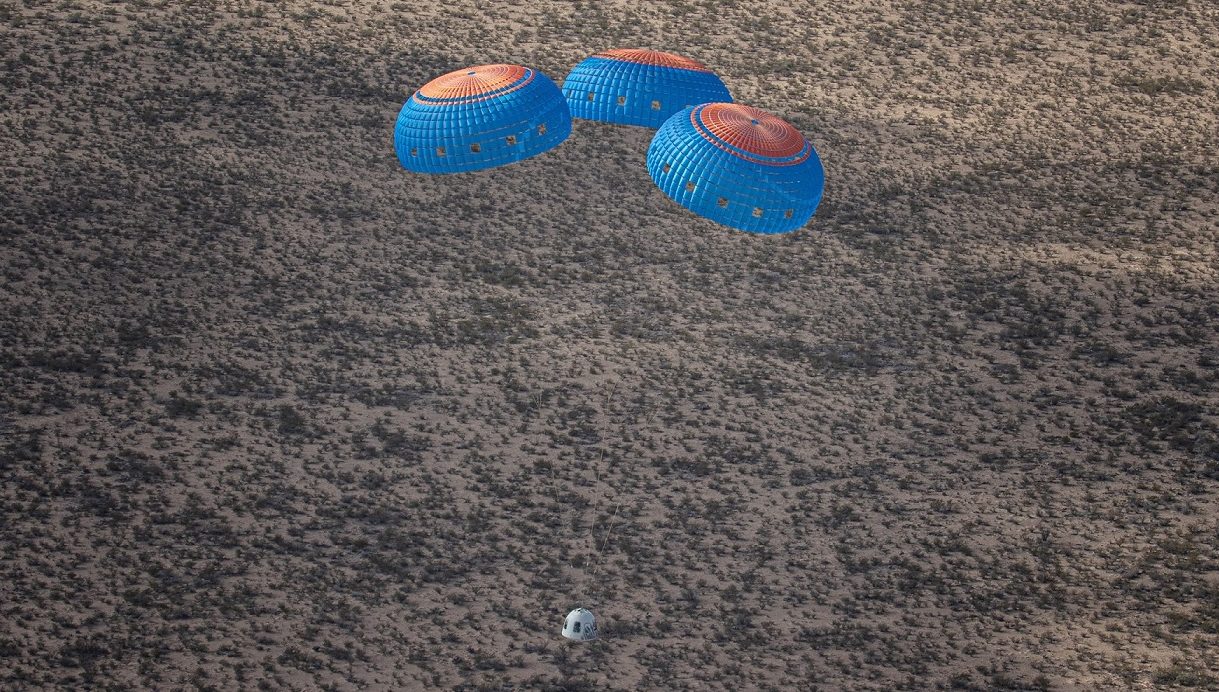 The New Shepard Crew Capsule lands back in the Texas desert with Blue Origin's 100th payload customer on board on December 2019. Image Blue Origin Chris Hegedus

If 2019 and the last 10 years have left you marginally exhausted, the 20s might also bring their fair share of roller-coaster emotions, daring innovations and bigger data use.

Feeling slightly overwhelmed even though it’s only midway into January and the start of the decade? We feel for you.

Only a few days after we cartwheeled into the 2020s, faster than a sip of champagne came news that US President Donald Trump had almost started a war on Iran, wildfires were burning across Australia while Prime Minister Scott Morrison coolly declared support for coal and fossil fuels (climate crisis, what climate crisis?), the Taal volcano erupted in the Philippines and Eskom went right back into load shedding mode.

In the past decade, we’ve talked a lot about the tech foray into our lives and the use, and constant selling of our personal data. Since apps have changed the way we work, travel, pay, communicate, read, watch, exercise, meditate, or experience our homes, it also opened the “big data” Pandora’s box, shaking our right to privacy.

Former Google design ethicist Tristan Harris called it “the downgrading of humanity”, and “a product of the growing cadre of companies and technologies that profit off of renting access to manipulate us with increasing levels of precision”, in Fortune. He is not the only one to raise an alarm bell: Author Shoshana Zuboff calls the times we’re in, the age of “surveillance capitalism” in her book of the same title, which Yvonne Jooste brilliantly analysed in this story.

But it doesn’t seem that the next decade will see a decrease in us sharing our data, for best and for worst. For a start, smarter homes that will soon get all-connected – “In December, Amazon, Apple and Google came to what appeared to be a truce: They announced that they were working together on a standard to help make smart home products compatible with one another,” says The New York Times Brian X. Chen.

This means that a simple act like opening the door might trigger switching on the lights, sparking the fireplace, turning the kettle on as homes anticipate our needs before we even conceptualise them. Then, from smartwatches that can detect when the person wearing it is in danger; to “a wristband that can read [the] mind, (…) a CTRL-kit which detects the electrical impulses that travel from the motor neurons down the arm muscles and to the hand almost as soon as a person thinks about a particular movement”, says Corinne Purtill in Time;  and millions of us tracking our fitness and sharing health data via wearables, big data is here to stay.

As Jooste explains: “If we thought that at least our feelings, thoughts, emotions, conversations, rituals, habits and our sense of home as a refuge, and as sanctuary could not be possessed in capitalist terms, Zuboff shows us that the surveillance capitalist claiming of the digital realm has made it so.”

The 2020s won’t just be about Big Data, though: We might finally see the takeover of electric cars; although predictions as to when electric will ditch the internal combustion engine diverge drastically, but Volvo hopes to have 50% of its sales coming from fully electric vehicles by 2025 and Volkswagen wants to go all-electric by 2026. However, in South Africa, it isn’t that simple, says Malibongwe Tyilo.

In 2020, Jeff Bezos’ Blue Origin is also planning to take humans to space, “NASA stands on the verge of commercialising low-Earth orbit”, and Elon Musk was quoted as hoping to send people to Mars.

In 2019, we discovered the meatless burger, in 2020, its hybrid cousin will land on our plates: “Beef mixed with plant protein such as that from peas or mushrooms is leading the trend,” says Anna Magee for the Telegraph.

Another big topic for the new decade is online education: “The question looms: Why do students need to sit in a physical classroom at all? And why must they pay so much for that increasingly dubious privilege? New technology has disrupted nearly every sector of the economy during the past few decades and the university isn’t exempt,” says Christina Weyrauch in the Wall Street Journal. And indeed, already back in 2018, an article by Jeffrey Selingo for The Atlantic explained that, “universities [might] start fusing the best of the online experience with the best of the physical experience, possibly like 2U (an online course- and degree-provider), is trying to do with WeWork” – a blend between brick-and-mortar schools and online courses.

Climate crisis remains the Damocles’ sword over the world’s head. The World Wide Fund for Nature said that, “2020 must be the year for coordinated, comprehensive climate action”, adding that “we’ve got a lot of work to do before then”. Meanwhile, the Met Office forecasts that 2020 is set to be one of the hottest years on record …

2020 might also propel us into what some call a “Deepfake future”; a deepfake is “an AI-based technology used to produce, or alter video content so that it presents something that didn’t, in fact, occur”; as AI is only getting better and better, so are deepfake videos that blur the line between truth, and utter fiction, making it harder for people to know a fact from a fake. At Google, “Researchers are creating tools to find AI- generated fake videos before they become impossible to detect. Some experts fear it is a losing battle,” says the New York Times Cade Metz.

Trying to predict the future based on past trends, studies or even prophecies is nothing new. Back in the 16th century, Nostradamus, a French astrologer behind a series of prophecies, was credited for allegedly predicting some of the world’s major events, including humans landing on the moon. For 2020, the seer apparently predicted “a great earthquake in America, a global economic crisis and an abrupt rise of sea level” (that is, if you can read into quatrains that speak of threatening events that could almost be randomly applied to any world events). Doomsayer, much?

More recently, an article in The Atlantic analysed a 2004 “119-page report by the National Intelligence Council titled Mapping the Global Future” – in which the authors imagine what 2020 would look like. The report makes for a compelling read with journalist Uri Friedman noting: “While the analysts at the National Intelligence Council may not have seen President Donald Trump coming 15 years ago, they anticipated Trumpism. They didn’t expect the United States to voluntarily reduce its presence in the world, but they grasped that its clout was eroding. They missed the Islamic State, but foresaw the conditions in which ISIS arose.”

And if none of the predictions are appealing and the weight of the new year is still weighing you down, President Cyril Ramaphosa’s 2020 New Year message might help: “Just as the strongest steel is forged in fire, just as diamonds are forged deep inside the Earth’s crust under the most extreme pressure, let us turn adversity into opportunity. In doing so, let us each play our part: for upon the conduct of each depends the fate of all.” ML

This article first appeared as a newsletter; to subscribe to Maverick Life newsletters, sent out every Sunday morning at 9am, click here.